From Koh Phangan, we decided to head to somewhere new for both Pete and I, since last time I travelled through Thailand I essentially ‘got stuck’ on Koh Phangan and couldn’t bring myself to leave. I never visited anywhere further South, places said to be amongst the most beautiful in Thailand.

So we got the ferry back to the mainland to get a minibus to Railay Beach, a collection of beaches in the Krabi area only accessible from the sea. As we neared the Krabi region giant karst features began to appear. Karst features dominate most of South East Asia, a mix of limestone rock and jungle that juts almost vertically from the flat ground. They are beautiful both on land and in the sea. 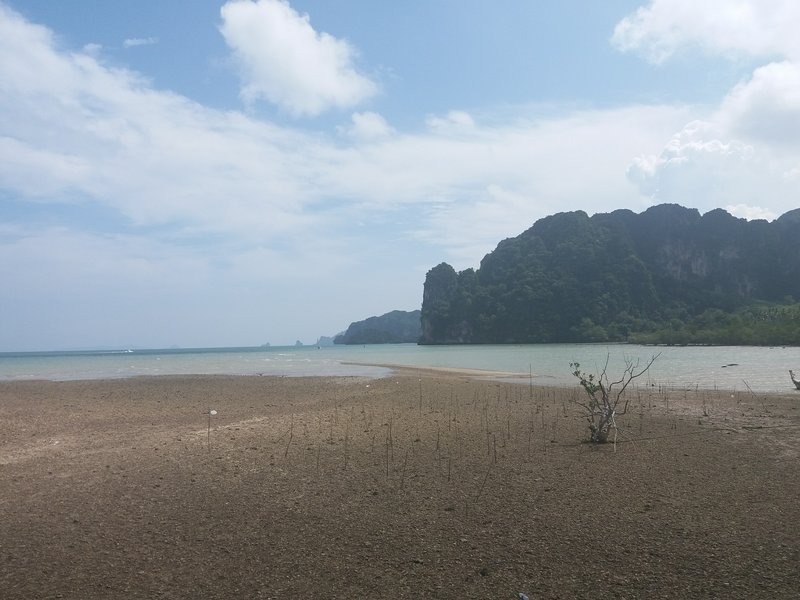 Once again, I used the journey to browse accommodation in the area last minute and decided on a place higher up in the mountains surrounding the beaches which had a pool and cool looking views. Booking last minute like this we got a steal of a deal for a private room with a/c!

We arrived relatively late in the day and after a long day in a cramped minibus we decided to take advantage of the deserted pool area… for most of the afternoon/evening, we were the only ones in it! 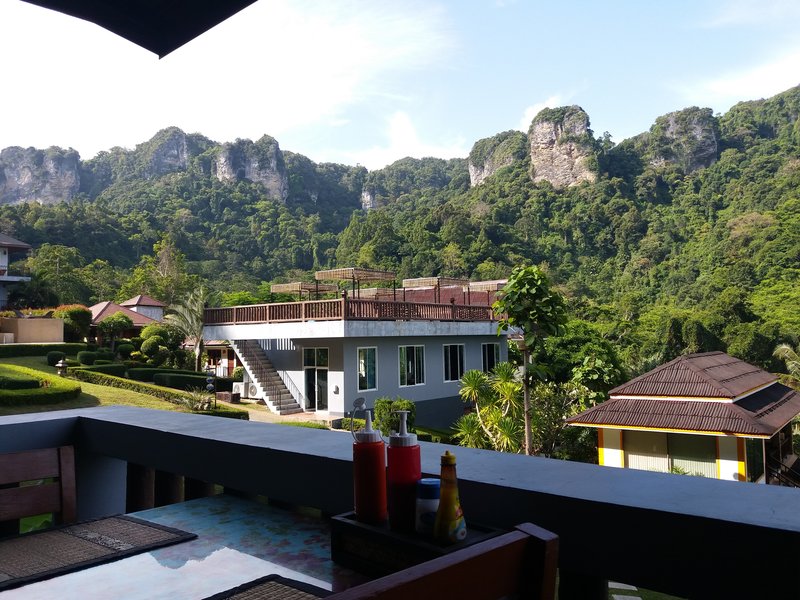 View from the resort’s restaurant 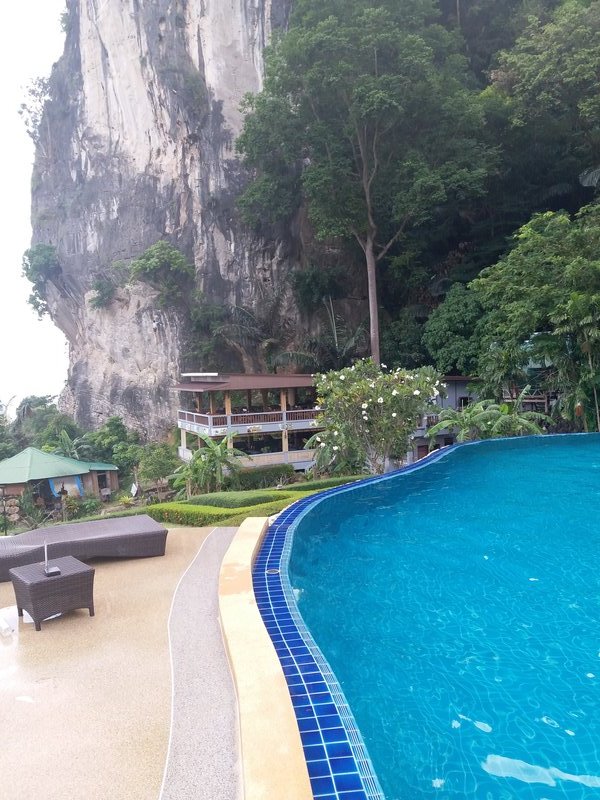 The pool and view of the karst – along with rock climbers! 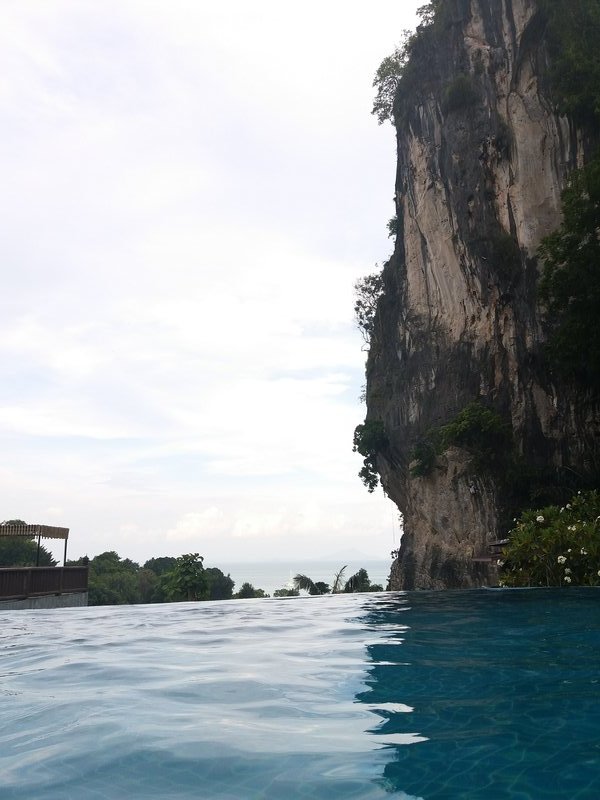 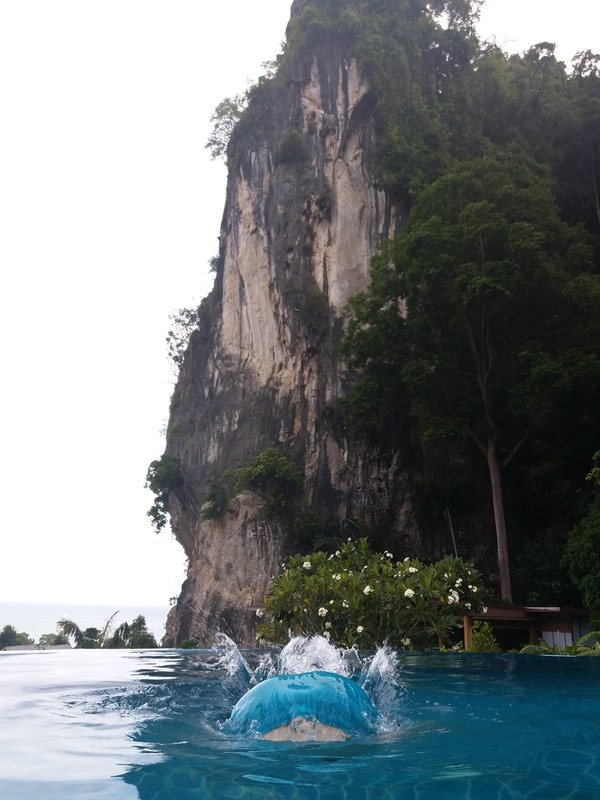 We played like children in the pool until our fingers turned into prunes (perhaps another reason why we had the pool to ourselves!) and headed to bed early so we could have a full day activity the next day. 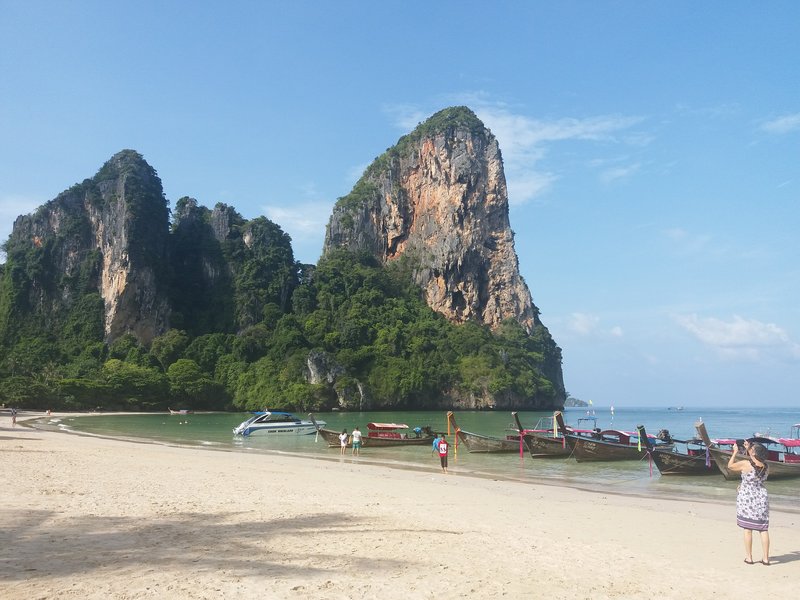 We had breakfast on the beach at a little cafe and then hired a kayak to go off adventuring around the karsts in the sea. Needless to say, we took to the team kayaking like a dream, and as competitive as we both are, made sure we were the fasted kayak in the whole area (although I don’t think anyone else noticed!). 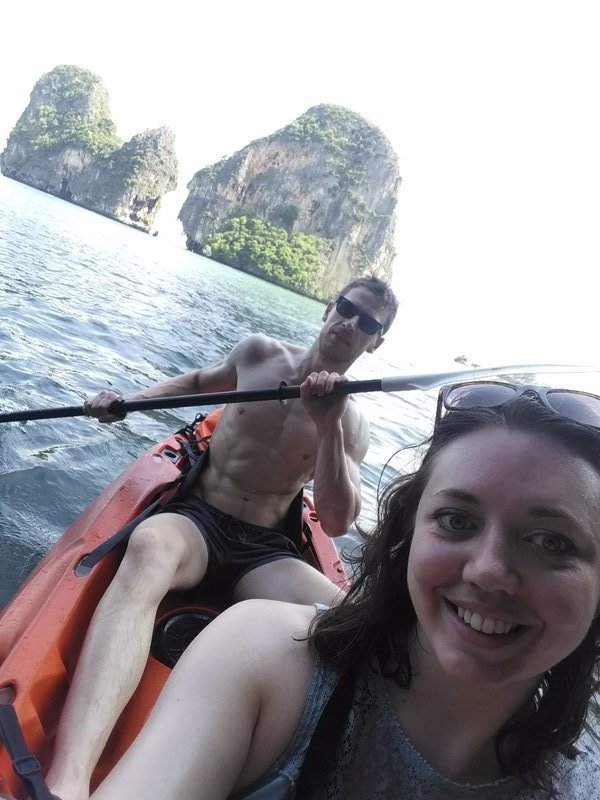 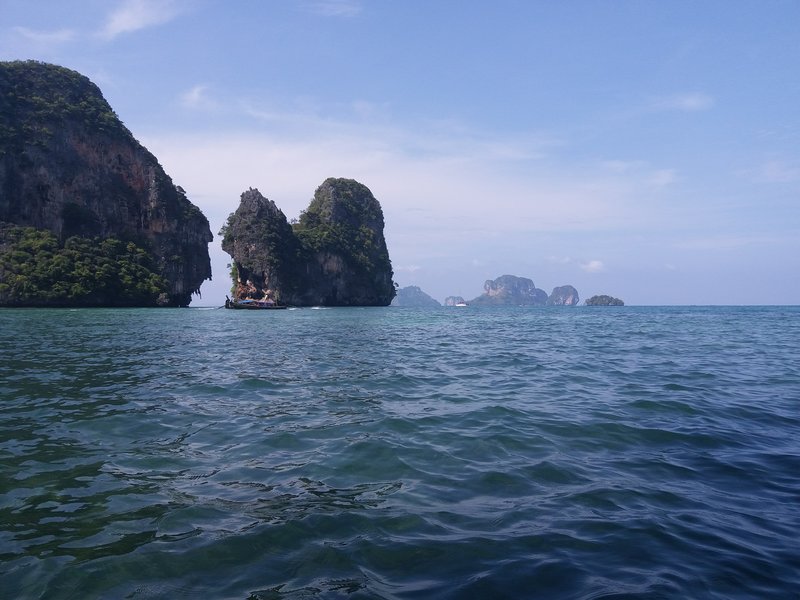 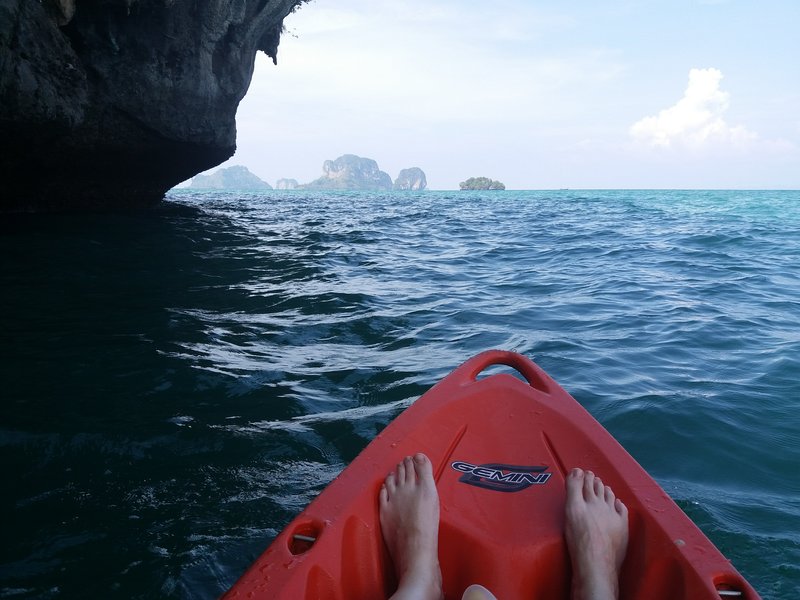 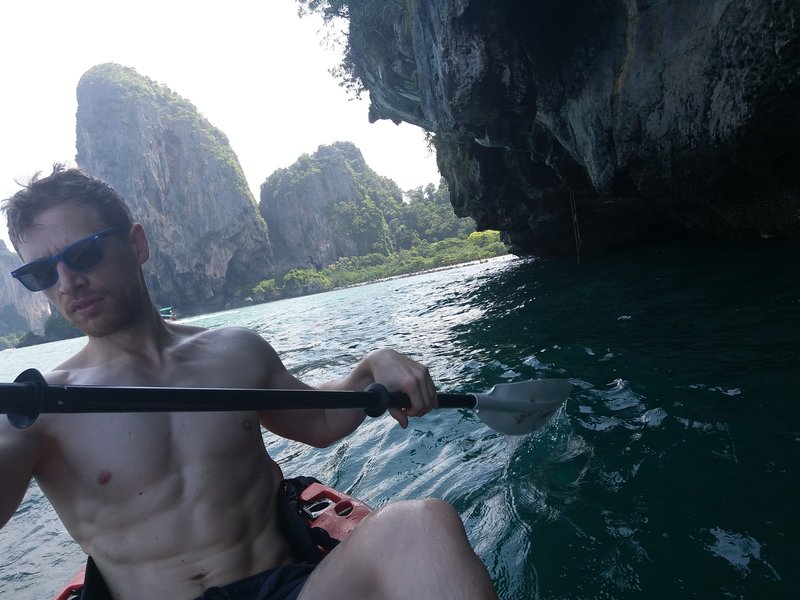 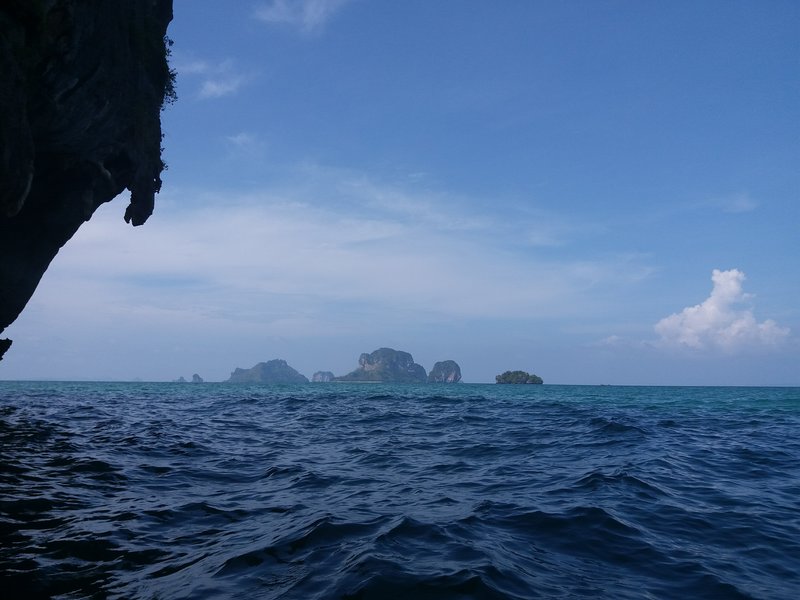 After kayaking around some of the karsts, we stopped at Ao Phra Nang, another secluded beach within the secluded beaches…. only it wasn’t so secluded, it was incredibly busy…. We did manage to find a relatively quiet spot at one end of the beach. 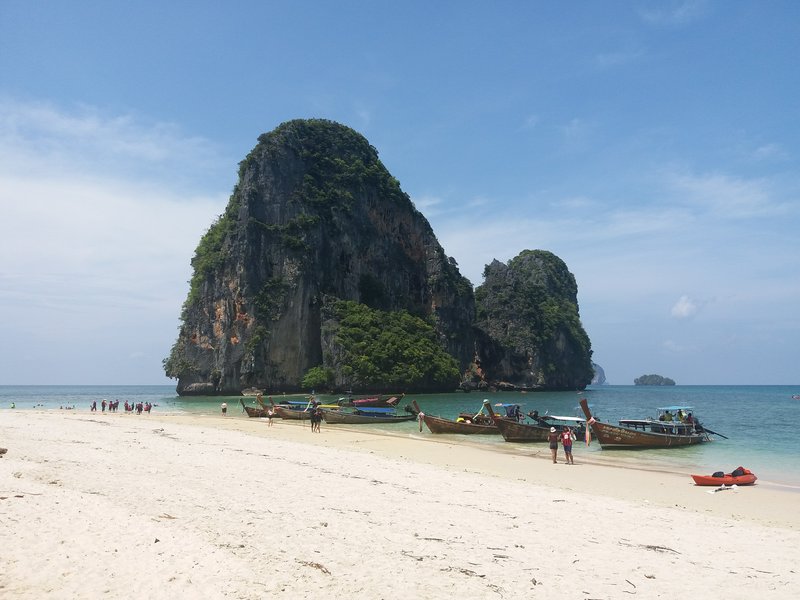 After a chill in the shade, we headed back out on the kayaks, on the way out into the sea we spotted a small lizard swimming. We were curious so got as close as possible to see… Suddenly, the lizard ‘died’, it stopped swimming and began to sink a bit. Both a little worried, Pete scooped it up on his kayak paddle and carried it back to the shore, placing it in the shade of the jungle. It stayed dead for a while, I thought Pete might start doing CPR when, as suddenly as it had died, it sat up – definitely alive. We realised we had been tricked by the little lizard which was obviously playing dead… we probably ruined his nice afternoon swim! 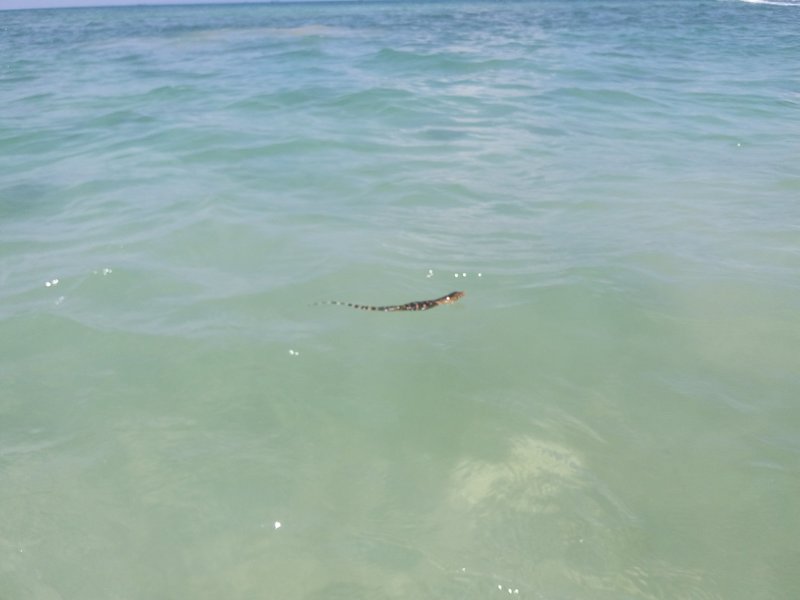 Back on the water, we found some more wildlife to watch, as many birds live in the karsts as well as crabs and monkeys. We also found a small cave to kayak through which was nice and cool… literally… it was roasting in the sun, so we sat in the cave for a bit cooling off! 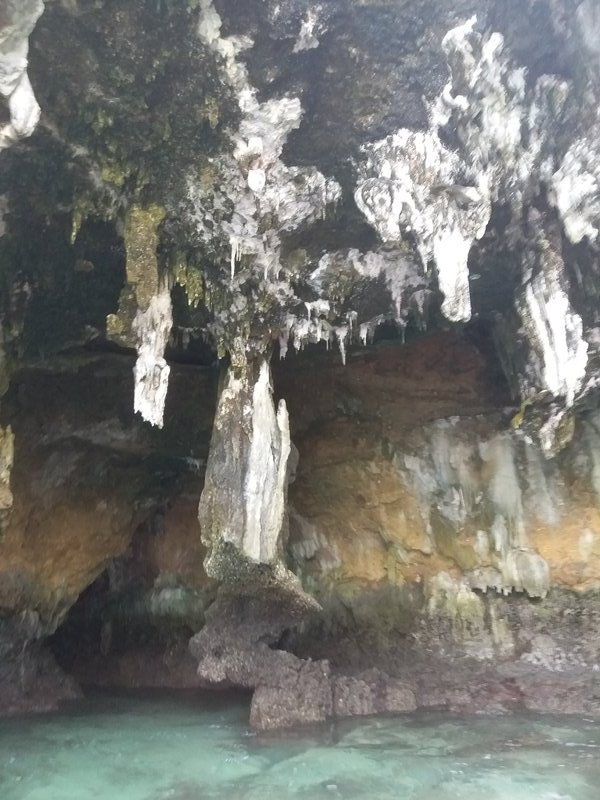 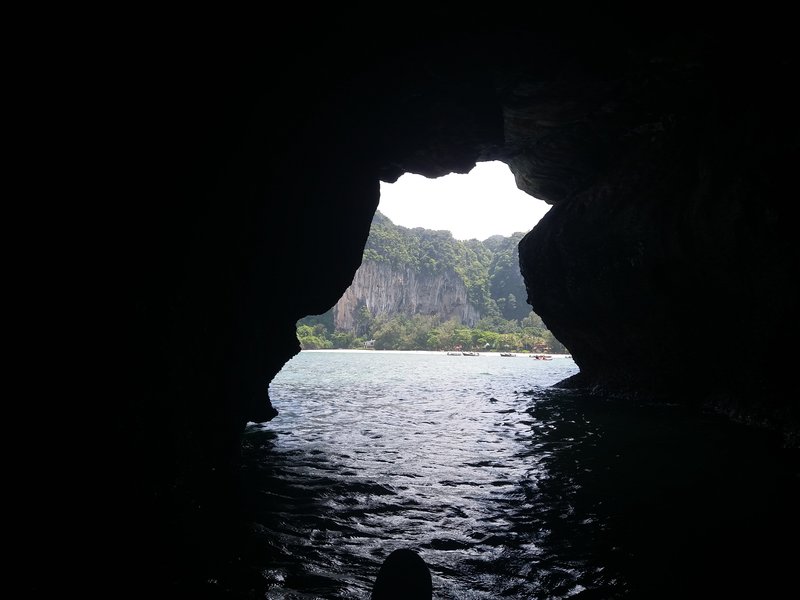 Cooling down in the cave 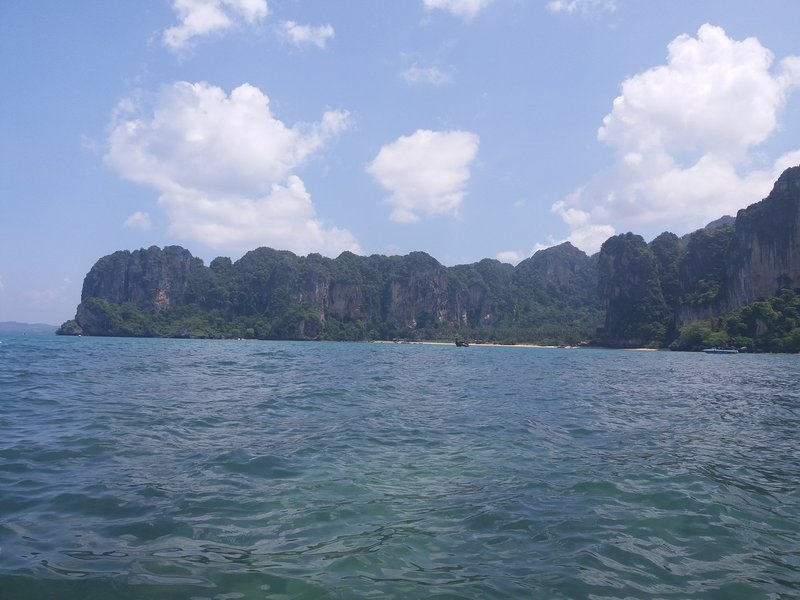 Back on land we had another chill in the pool, watching the climbers on the karsts – both humans and baboons, before heading out to a little cafe built on stilts over the water and with small treehouses. We expected it to be very busy, but we were the only ones there all night! 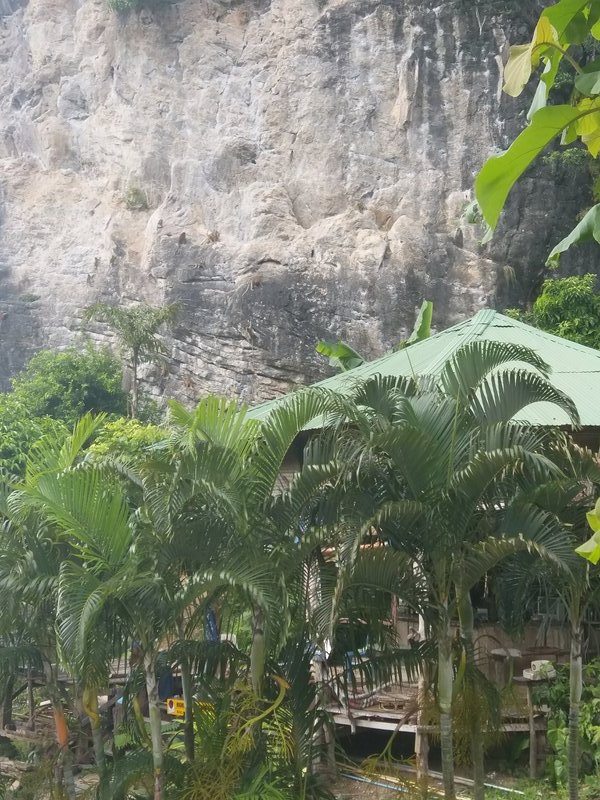 You can just about see the baboons on the cliff face 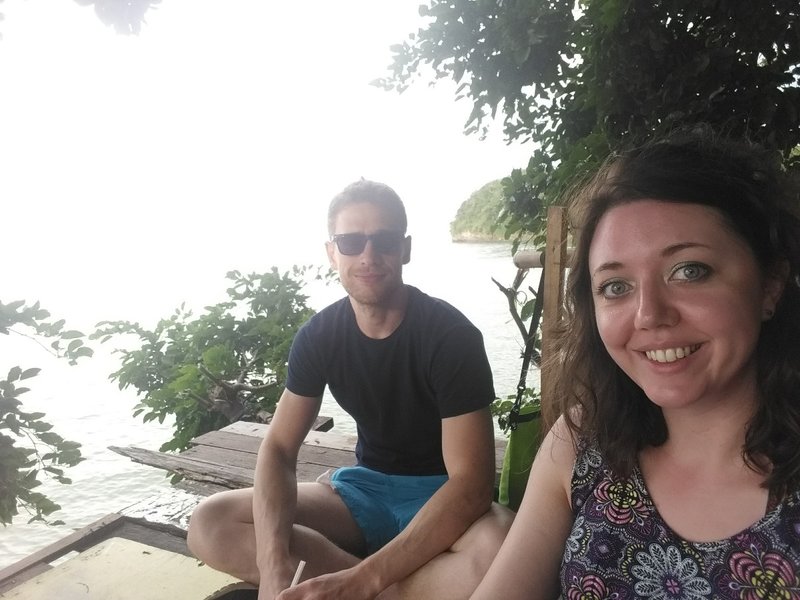 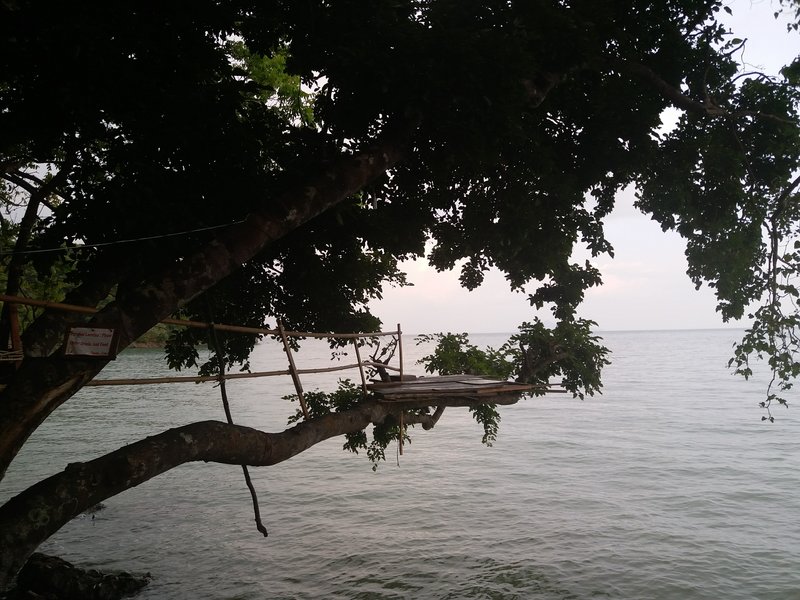 The treehouse seating was cool, but after a few cocktails, we decided that walking across a 1ft wide tree branch to get back to out seating area (with drinks in hand) was not the best idea so moved to a more accessible seat! We stayed at the bar to watch the sunset and eat delicious stonebaked pizza. On the way back to our hotel the steep walk up the hill takes you behind all the houses and basically through the jungle, which was a little scary in the pitch black – especially since both our phones had died (which we were using for torches), but then…. fireflies. They were amazing and everywhere, which made the walk back to the hotel magical and memorable. 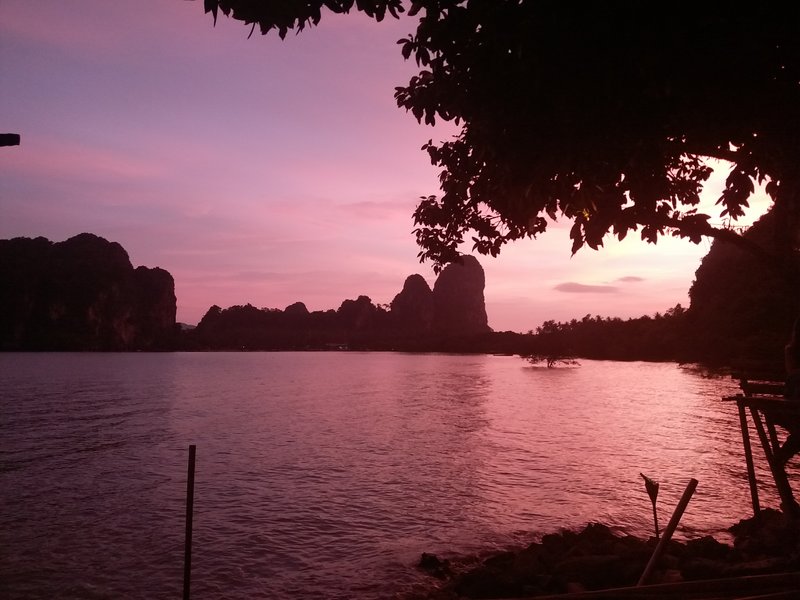 My best sunset pic – with no filter! Honest!

We loved Railay, it was beautiful, but everywhere we had been so far on our adventure was not as Pete had expected from my fond Thai memories. Places were busy and ‘touristy’, which isn’t necessarily a bad thing, but from my stories of previous adventures, Pete wanted to experience a quieter side of Thailand, less influenced by mass tourism. I also wanted to go somewhere new for me too. So we decided to take a trip to Nakhon Si Thammarat. A city in the South East of Thailand which I had wanted to visit previously….