After a boat and taxi to Krabi bus depot, we boarded a local bus to Nakhon Si Thammarat City which took about 2 hours. I booked somewhere again on the way, but as soon as we arrived a huge thunderstorm began and we waited at the bus terminal for a while for things to calm down a bit before heading out. 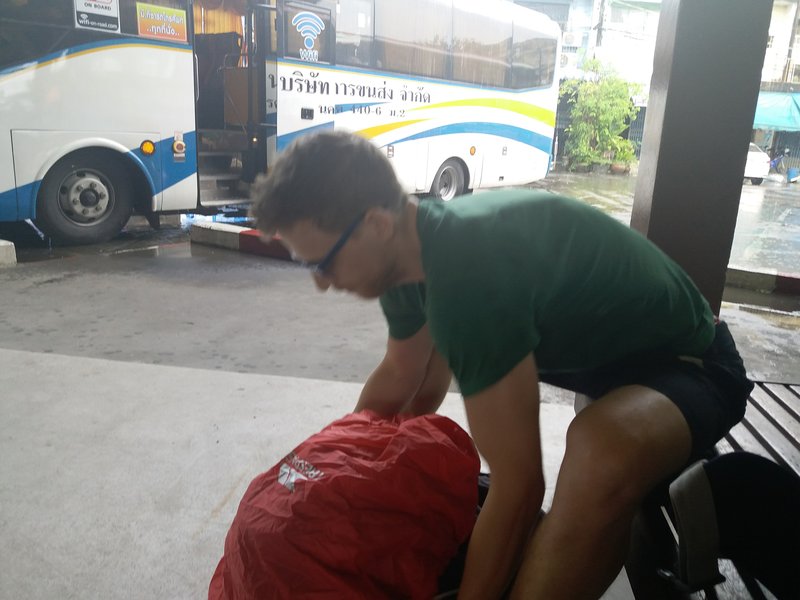 Preparing our bags for the thunderstorm

We got a short taxi to the accommodation which was pretty and headed straight out to get some food. We ended up stopping at a small street food vendor who didn’t speak any English. I tried pointing to the things we wanted and tried to communicate ‘no meat’, but our noodle soup that arrived was full of pork! We still ate it, and order extra crispy noodles as well! After we headed to a new small cafe which served the most ridiculous desserts! 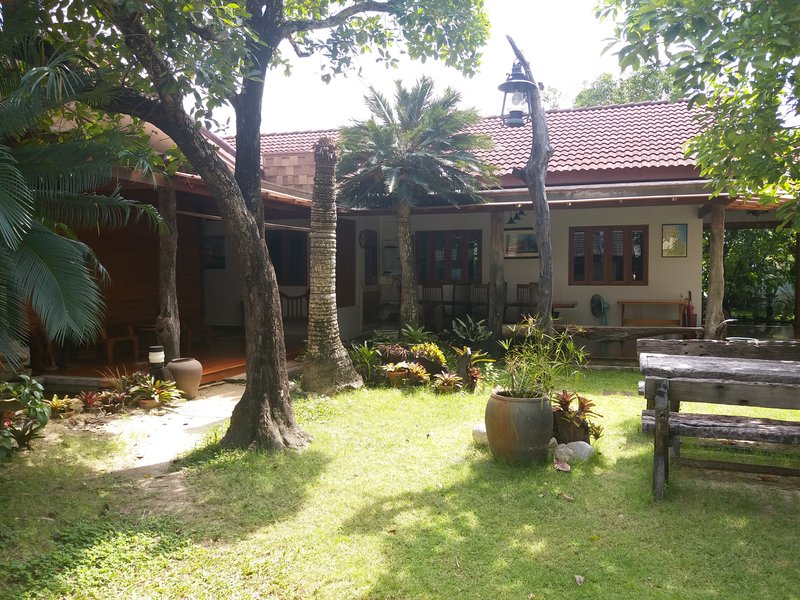 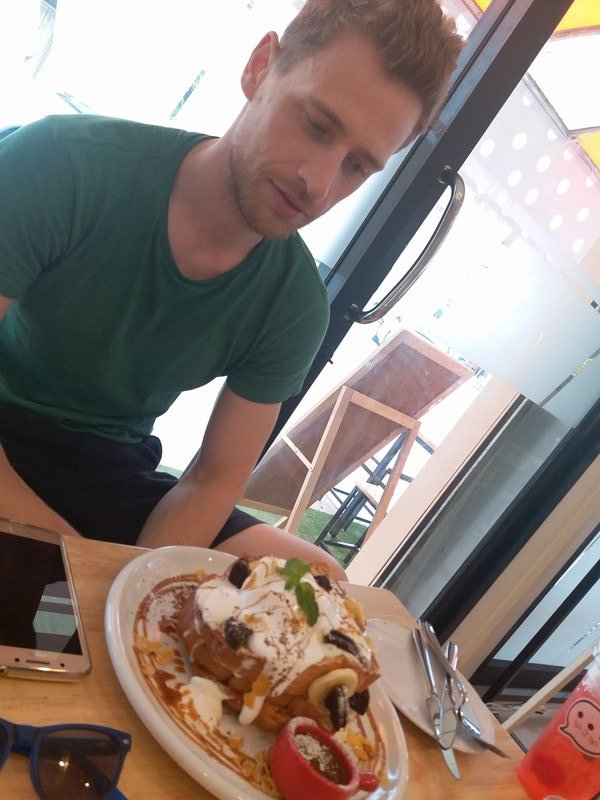 Pete started feeling bad again that evening so we went to bed early, managing to arrange a scooter to hire the following day so we could go out to visit some of the local areas. The next day we took the (manual) scooter (good job Pete is a quick learner) over to a small town which was almost wiped out during a mudslide in 1988. Since then, the village rebuilt and is now an open village to go and learn about sustainable farming and organic fruit growing. The drive was great and the roads were nice (if a little jerky on the gear changes). 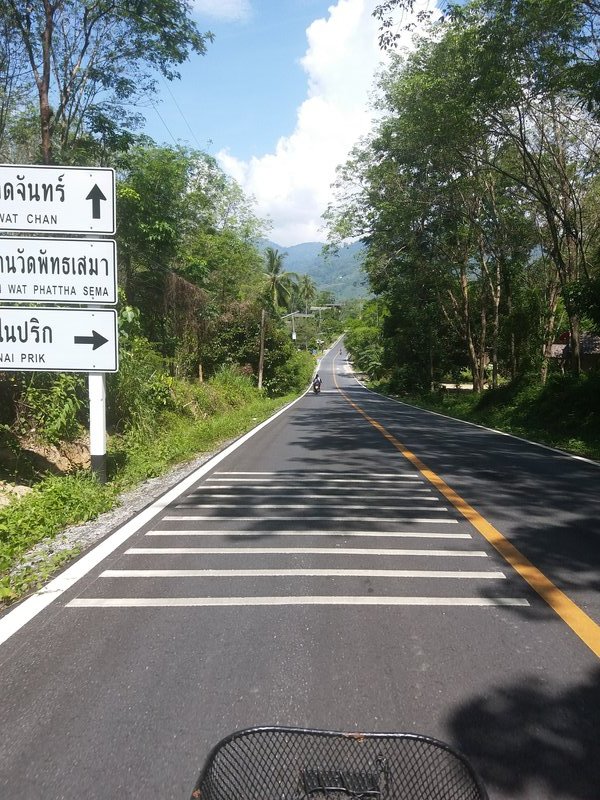 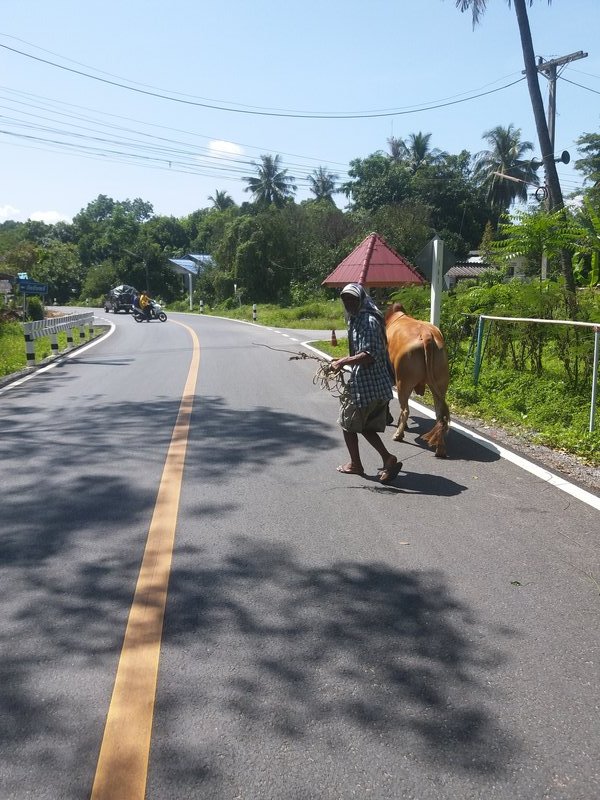 The village was beautiful and we ate at a little cafe before exploring the area and stumbling upon a popular swimming spot in the river upstream from the village. With Pete still not 100%, we chilled at the river for a while. It was nice and cool sitting in the water. 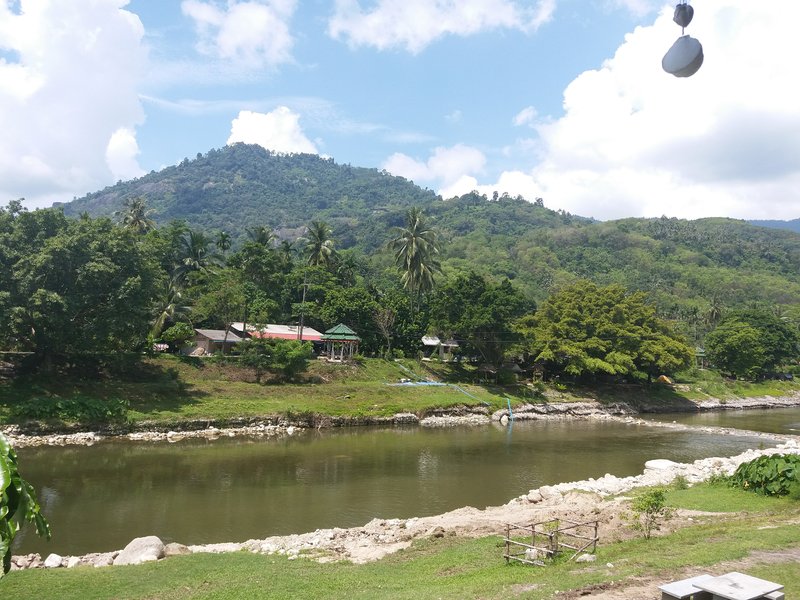 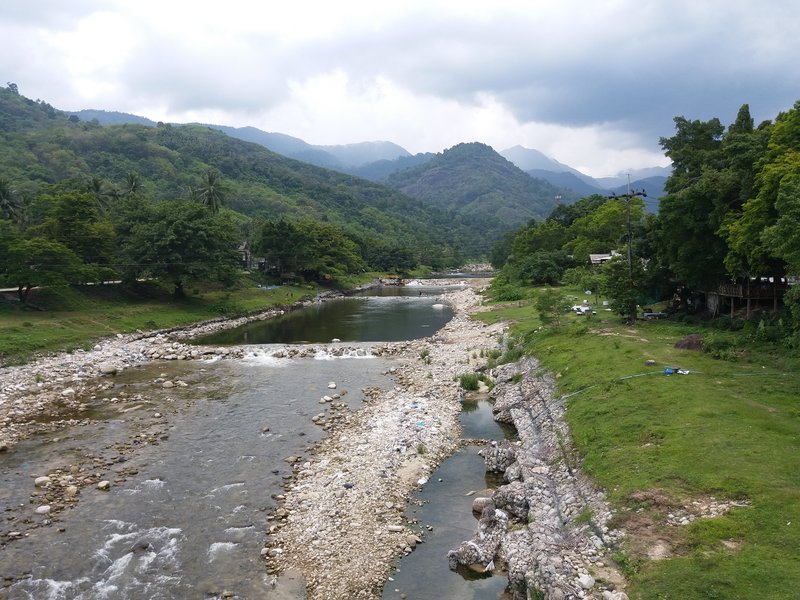 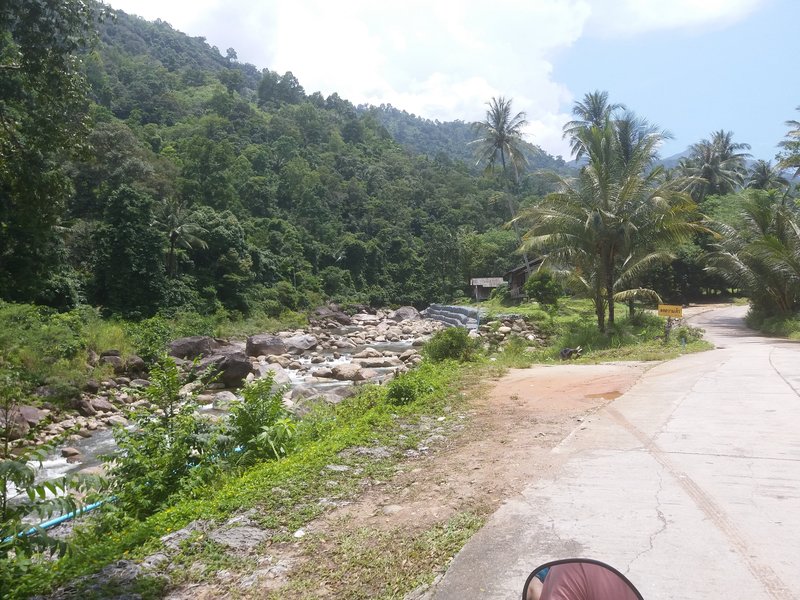 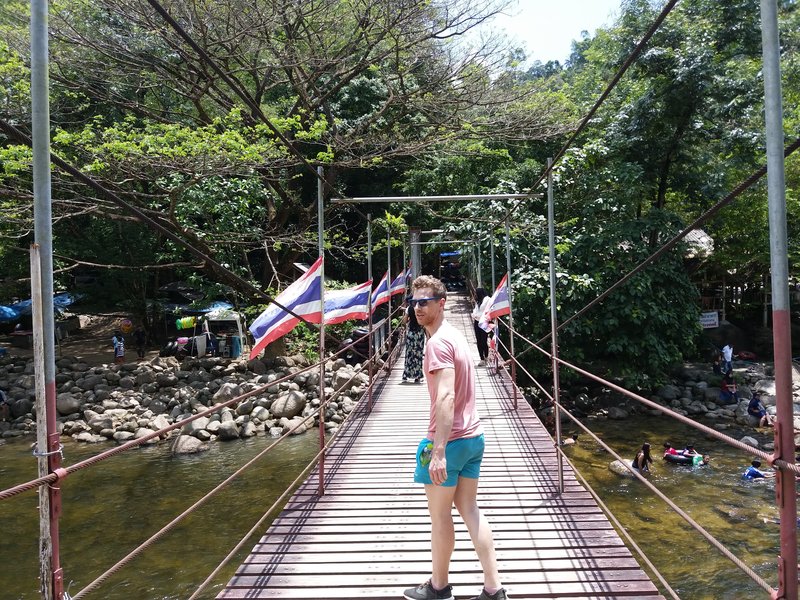 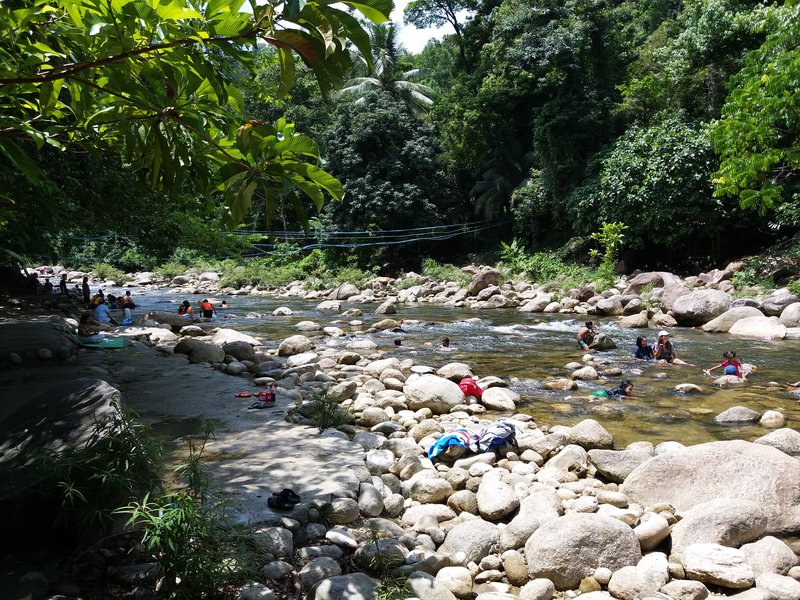 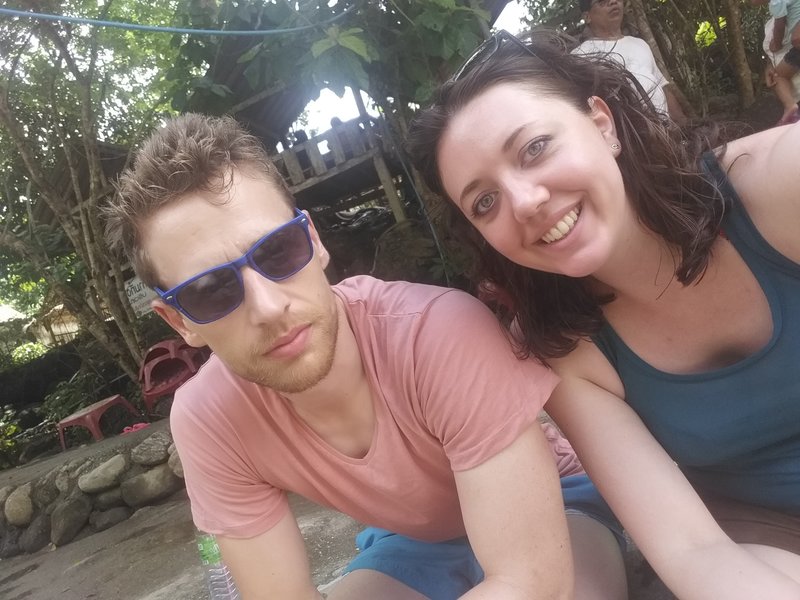 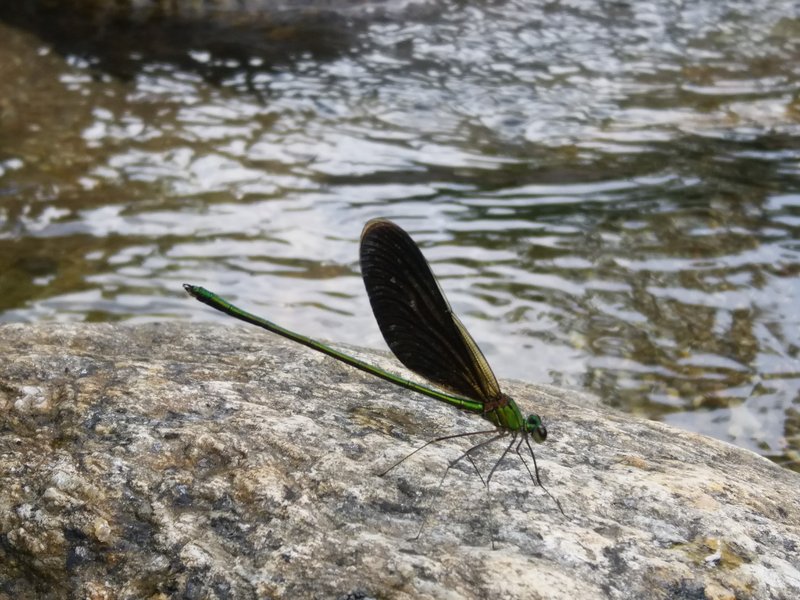 On the journey back to the city, the heavens once again opened and we were caught in a hailstone storm which forced us to stop because it was too painful with the hail hitting us! The wind as we drove got us very cold as well, so we stopped at a little cafe for hot drinks to warm up and to buy some ponchos for the rest of the journey back. 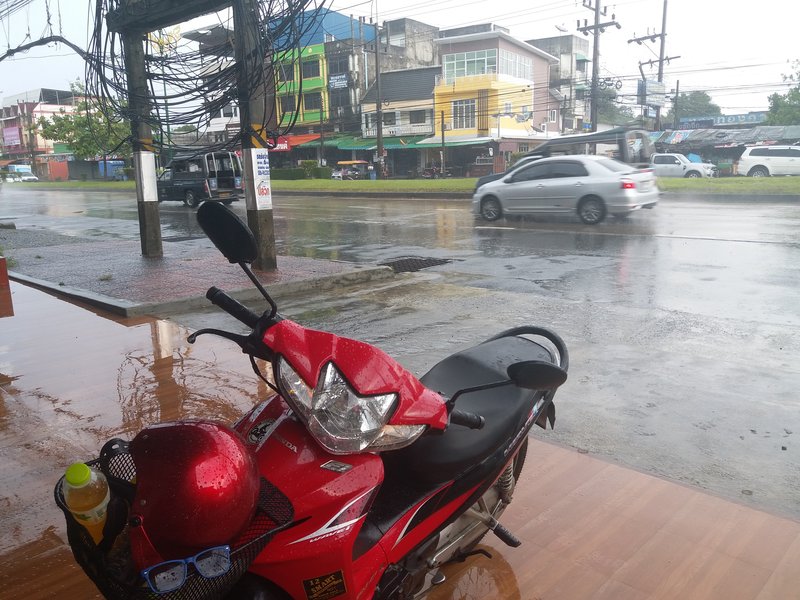 The weather stayed bad all night, as did Pete, so I rode a bike up to a local Maccies for takeout and we slobbed out in the room watching Muay Thai on TV!

The next day had cleared slightly, so we headed out again on the moped. I had planned to visit a nearby waterfall which Google said was only 1 hour away. An hour later, we were only a third of the way there thanks to our low cc little moped, so we turned around and headed back to town. We took the moped back and decided to head out on the free bicycles instead, which was another error. We went over to a local food and fruit market – where I treated Pete to some rose apples… delish! But on the way back Pete’s bike got a puncture! We went to about 4 different bike shops before finding one with the tools to help us. As the fixed the bike, I got some food from a street food vendor who had a little som tam cart attached to a bike, he was riding through the streets stopping regularly. I ordered a som tam salad (spicy papaya salad with peanuts) and he showed me how to make it! I got some sticky rice to go with it, it was one of the best papaya salads I’ve had!

Once the bike was fixed, we decided to return to the hostel and swap to the moped – we didn’t want to push our luck on the bikes! We headed back out to look at the temples in the town and attempted to go to Wat Phra Mahathat – supposedly the oldest Theravada Buddhist temple in Thailand – but unfortunately, it was closed when we arrived since by this time it was after 4pm. 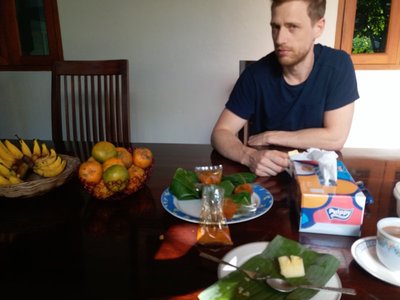 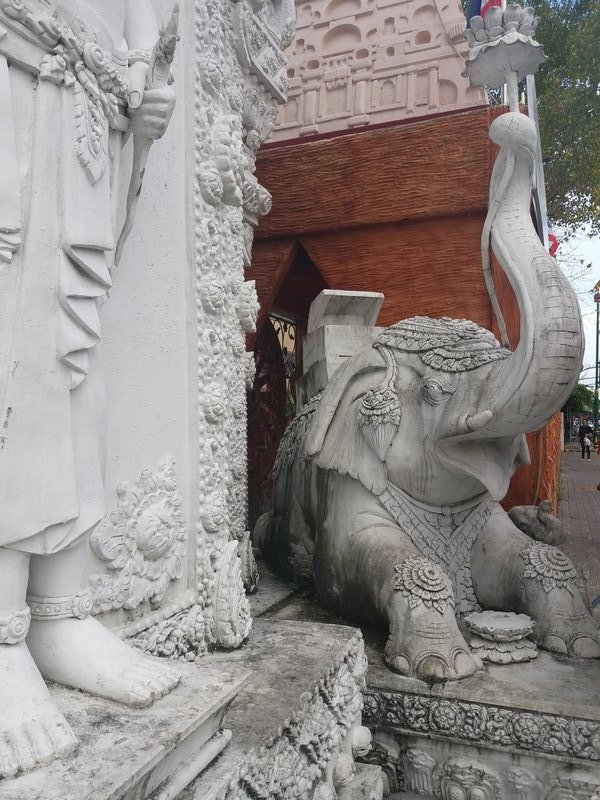 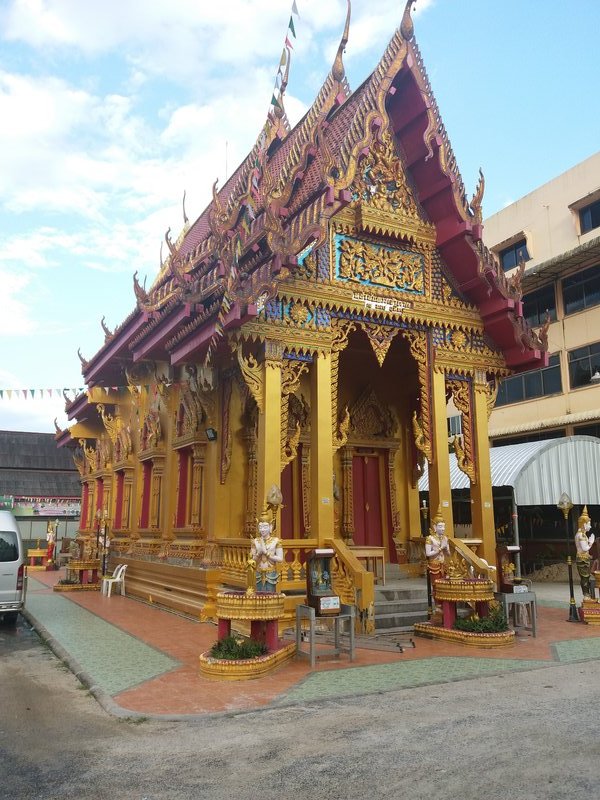 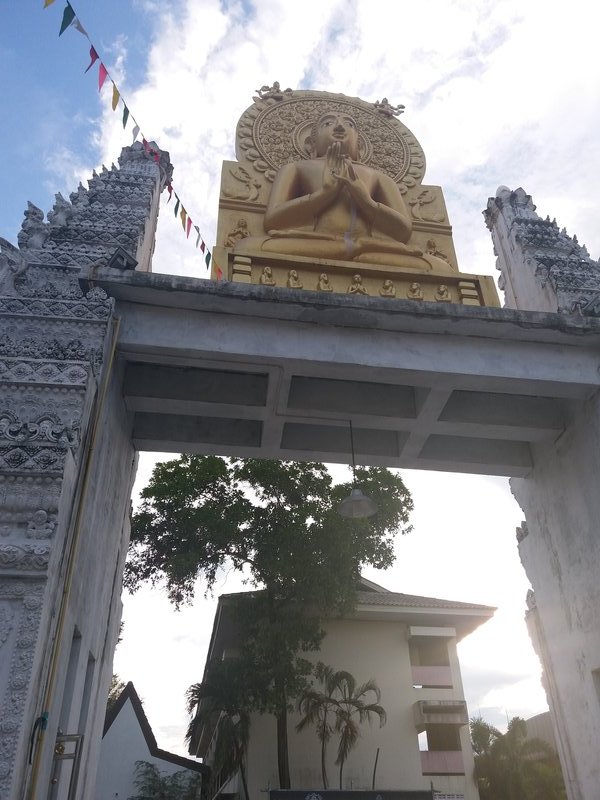 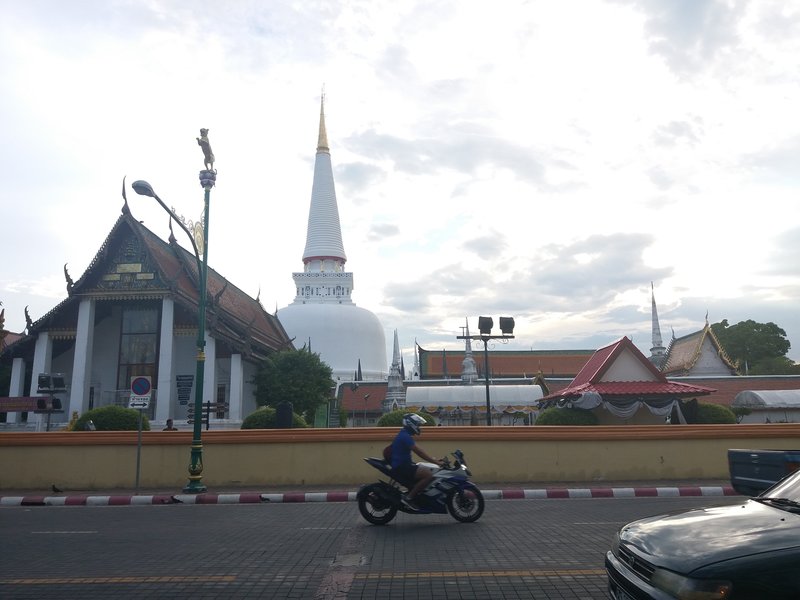 We stayed out for a while until it started going dark, we headed to the central park of Nakhon where local people were exercising and playing sport. We watched a group of people playing with a rattan ball. There was also another group, also with a rattan ball, playing a game where they were trying to kick the ball into a very high basket. It was fascinating! 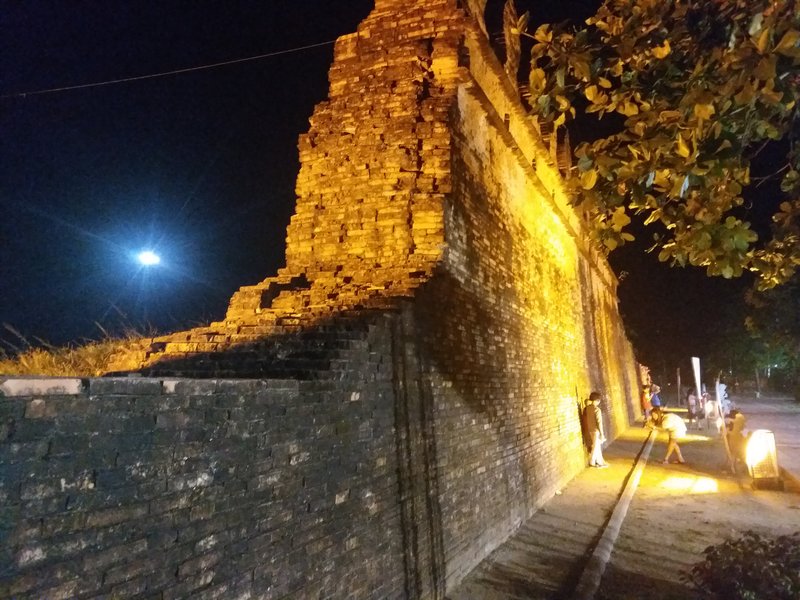 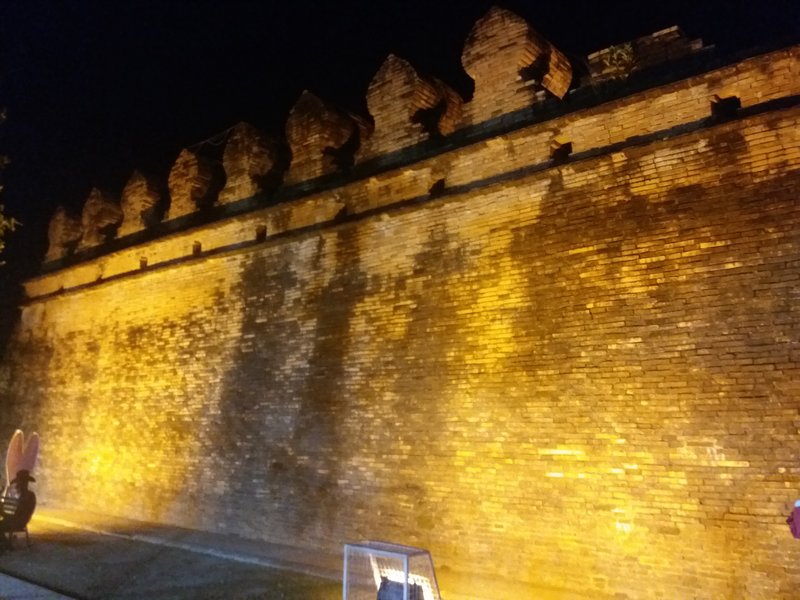 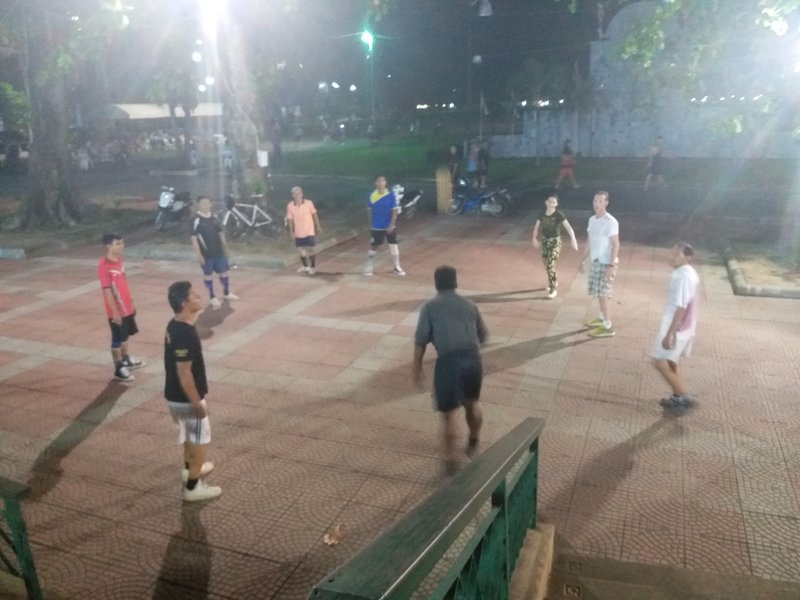 Circle of people playing with a rattan ball 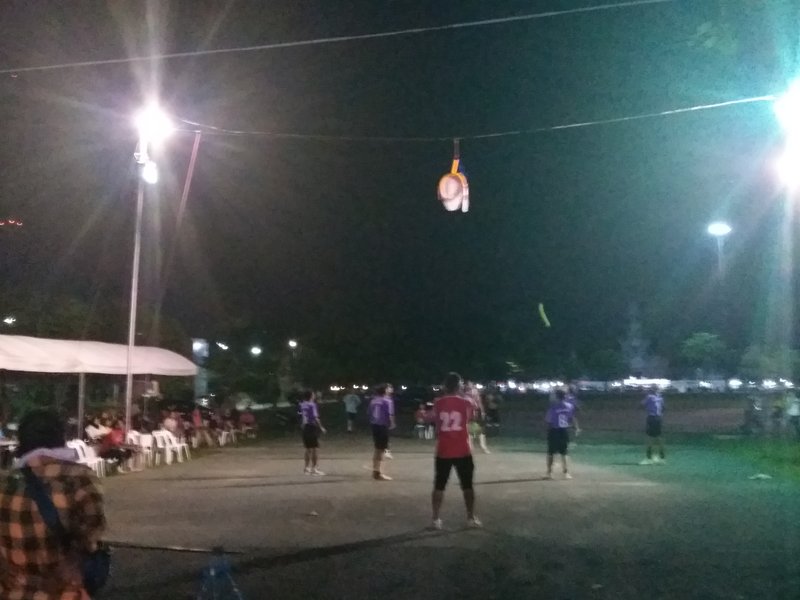 Trying to get the ball in a basket!

The following morning we got up early to visit Wat Phra Mahathat whilst it was open. The temple was beautiful with a lot of monks about. In one of the leaflets at the temple it said that a lot of monks do a pilgrimage to the temple because it is so old. 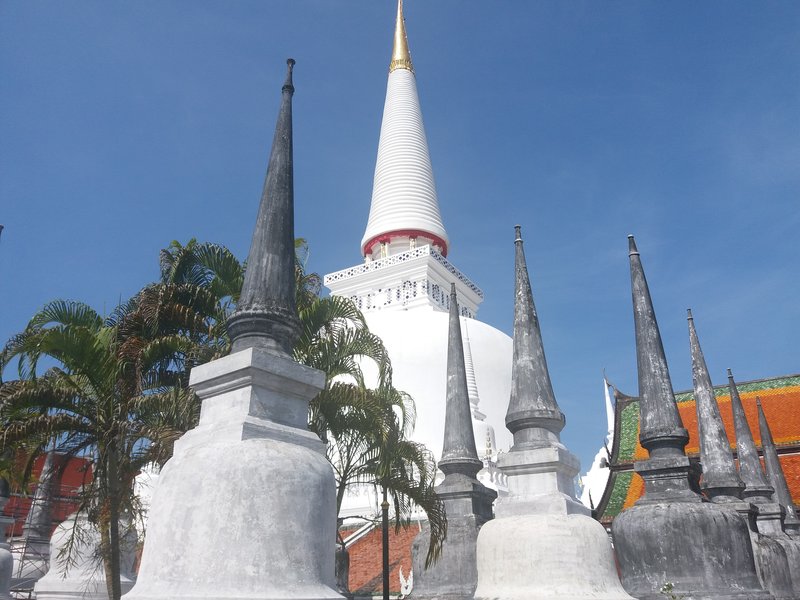 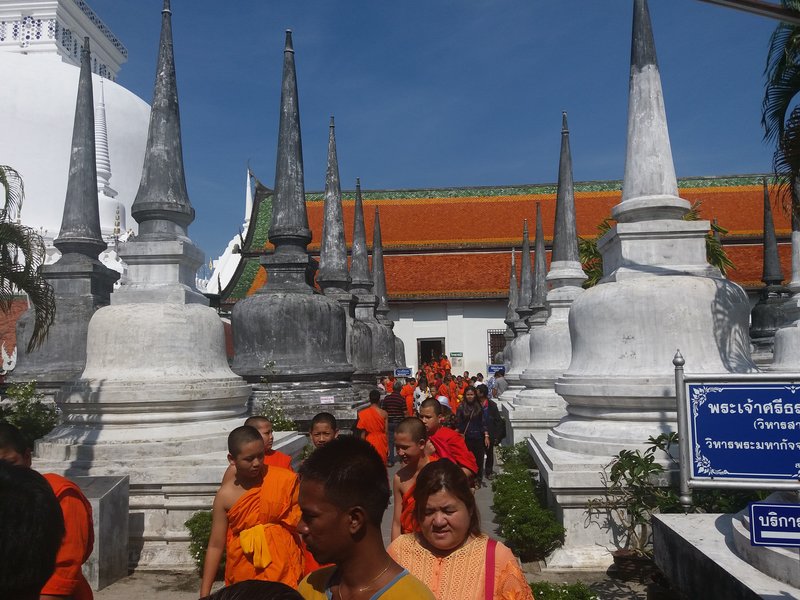 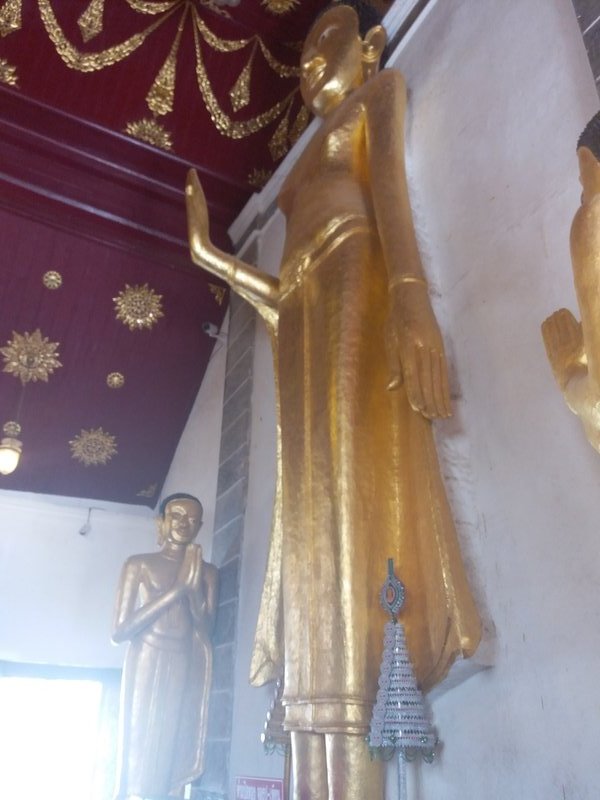 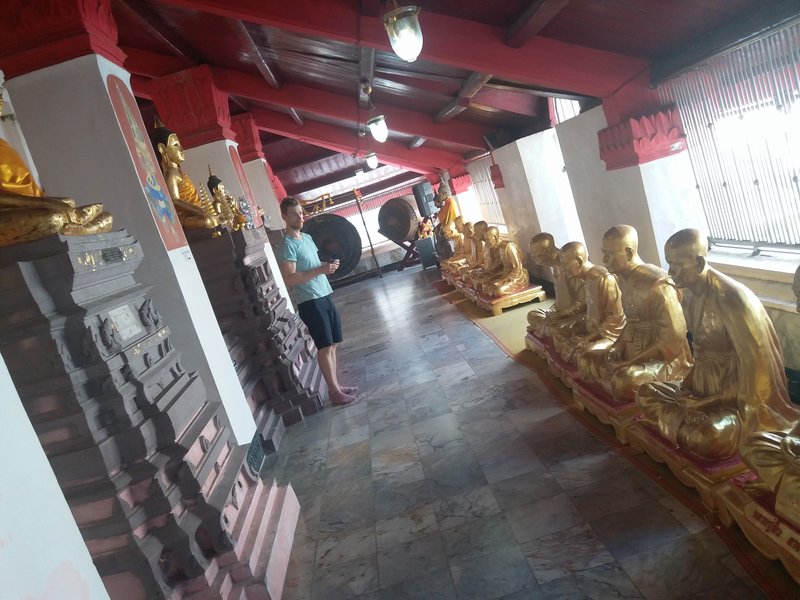 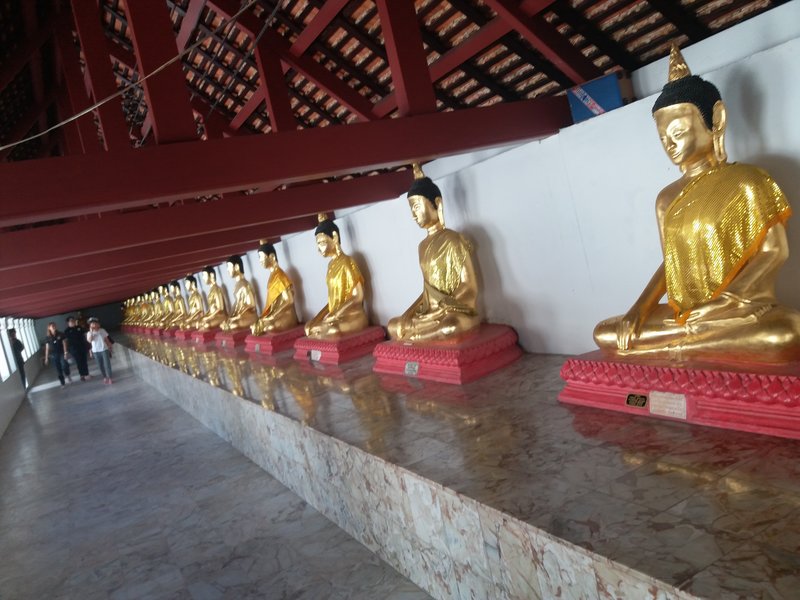 From the temple, we headed back to pack and fly from Nakhon airport to Bangkok in time to catch our flight home…

We had a great time in Nakhon Si Thammarat, there was lots to do here and it felt a little more ‘off the beaten track’. Overall I think I got the balance spot on for this holiday, we visited the capital, we experienced Songkran, played in waterfalls and in-land jungle, beautiful beaches, Thai islands and visited a traditional Thai town. A well-rounded holiday!

My love for Thailand and Thai culture grew and I will definitely continue to visit here in the future. Pete also really enjoyed it, apart from the unbearable heat – and it was hot – insanely hot, but then it was the hottest time of the year that we chose to go. I am not sure if I convinced him to live here in the future… I guess I’ll have to keep working on it 😀

It appears I did manage to convince Pete and we are now working on plans to move to Thailand!