Stage 3 of our Big Easter Adventure!

It’s Pete’s birthday on 5th May, which was in 2 days, so for his birthday, I suggested upgrading our 9-hour direct flight from Auckland to Bali to business class. We’ve flown business before with Etihad by using their bidding service, we bid £100 each for the upgrade and got it, it was amazing. This time we were with Emirates which also have a bidding system, but it looked like the minimum bid was more in the range of £400 ish, so I didn’t bother. But a few days before our flight I got an email from Emirates with a special offer for an upgrade which was pretty ‘cheap’, I think it was still about £300 each, but for Pete’s birthday and for such a long flight, we thought it might be worth it…

It was pretty good. Proper meals, really tasty wine and champagne, fully flat bed-seats, so we managed to get a decent sleep. Big TVs, free wifi, special service and fast track, yeah it was great… especially for such a long flight. Although, I still don’t think it’s worth the extra you’re supposed to pay. Special offers and bidding are the only way we would upgrade I think (unless I win the lottery of course…) 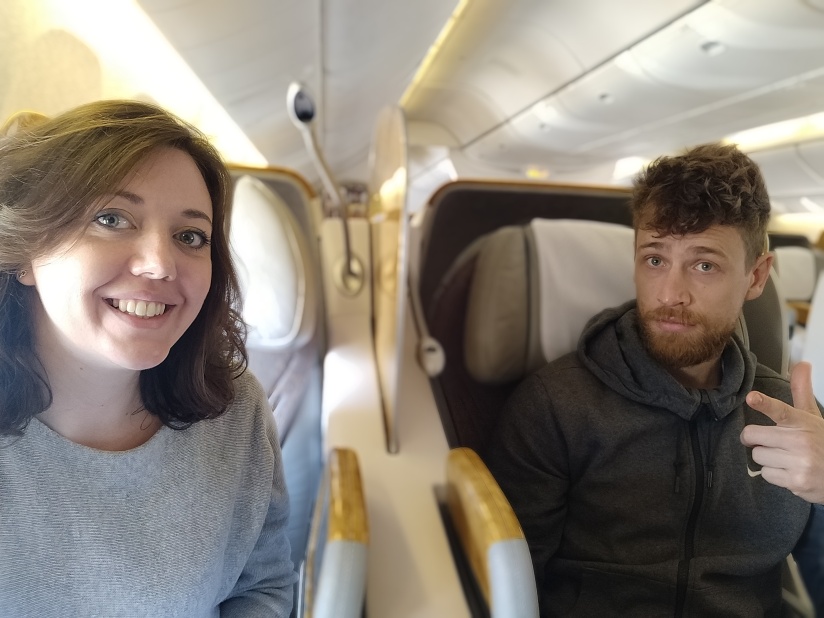 The views from the aeroplane windows were really cool though. We took a route over Northern Australia which seemed to be a red rocky desert for as far as you could see until we reached the coastal area. Then we spied some remote atolls and islands which looked incredible, my favourite was Browse Island (I was able to find it because of the free wifi!).

Views from the plane window – desert

Found out this island is called Browse Island

We landed in Bali and got picked up by our guesthouse from the airport. The guest house was stunning and in a less-touristy area of Klungkung. I have been to Bali before during my solo backpacking trip and although I absolutely loved the island and the culture, I found it extremely busy and touristy, especially around the South of the island – think instagrammers everywhere and lots of cool and unique features of the island that aren’t really enjoyed, just used as background-fodder for selfies… I think the Balinese culture is strong enough to accept the level of tourism and not to change too much, but this Instagram culture is hard to endure sometimes…

So anyway, armed with my previous knowledge of the island, we tried to go to places a little bit off the mainstream path…

The first full day in Bali was Pete’s birthday! We wanted to hire a motorbike and explore the region around Klungkung for the first day, to go to Padang Bai etc (one of my favourite places from last time), but in the morning the staff at the guest house said they didn’t have one for us, another couple took it, which was a bit frustrating since we asked them the night before. So we completely changed our plans and decided instead to take a boat from Kusamba beach over to Nusa Penida; a smaller island just 30 mins from Bali.

Kusamba beach was beautiful black sand, we got there just as they were getting the boat ready and watched the locals placing their offerings on the beach and by the temple, brightly covered flowers and incense sticks were everywhere.

When they were ready to go, a team assembled a little jetty to take you from the beach to the boat, before we finally boarded the Sekar Jaya boat. If you want more info about this Sekar Jaya boat crossing from Kusamba beach just Whatsapp the company on +62-812-3676-6618 or look on Google maps.

The journey to Nusa Penida was nice, but when we arrived we were overwhelmed with the number of people trying to sell us tours of the island, or motorbikes for hire etc. We tried to enjoy the crystal clear aquamarine water of the bay, but instead, we ran for some space behind all the crowds.

We then approached someone about a motorbike on our own terms and got a little moped for the day to take us to explore the island. I had a look at all the amazing thing to do, but in order to get the last boat back to Bali, we only really had 4 hours exploring. Since it was Pete’s birthday, I asked him what he wanted to do and he just wanted to have a beach day for once, so I checked Google maps for the highest-rated beach less than an hour away. We headed to Crystal Bay.

The drive there through the island was gorgeous. It’s way less-developed here than Bali and it seemed like there were only really smaller hostels and guest houses, not resorts or hotels.

We arrived at the Bay and hired some sun loungers to chill and do a spot of people watching. It was shocking how instagrammy the beach was. We sat here for about 3 hours, swimming, eating, sunbathing, and countless people were coming and going in that time, literally turning up for 30 min, taking about 100 photos in various unnatural positions with their arms in the air or on the edge of the sea, then just leaving… I honestly don’t get it. People seem to just ‘pretend’ to enjoy their time in places, when really all they do is perform a photoshoot then leave… The stunning Crystal bay was relegated to just background fodder for a few likes on Instafake… It makes me quite sad actually 😦 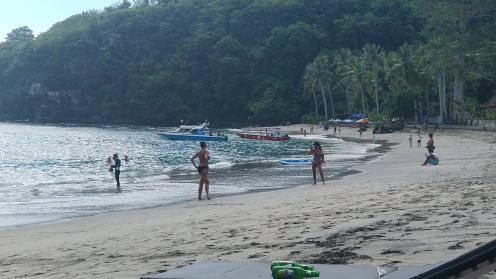 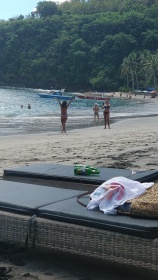 Pete did a few poses for me on the beach taking the piss, but I didn’t manage to open my camera in time! lol

Despite the weird Instagram vibe of the beach, we did enjoy our day. Although the beach itself was a little over-rated I thought – probably because of all the instafake photos hyping it up. It was nice, but I imagine it’s actually no better or worse than any other beach on Nusa Penida, they are all gorgeous really. But anyway, it was a nice birthday trip out to see a different part of Indonesia and have a chilled beach day finally after 2 weeks of hectic travelling. 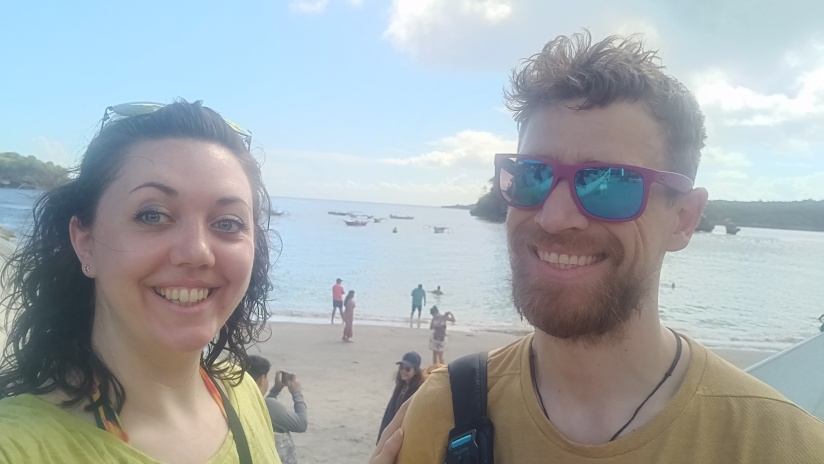 We got the boat back to Bali and chilled in the pool at the guest house which was really stunning, before heading to the Monkey Bar for tea and some birthday drinks. The sunset from the Monkey Bar was gorgeous! 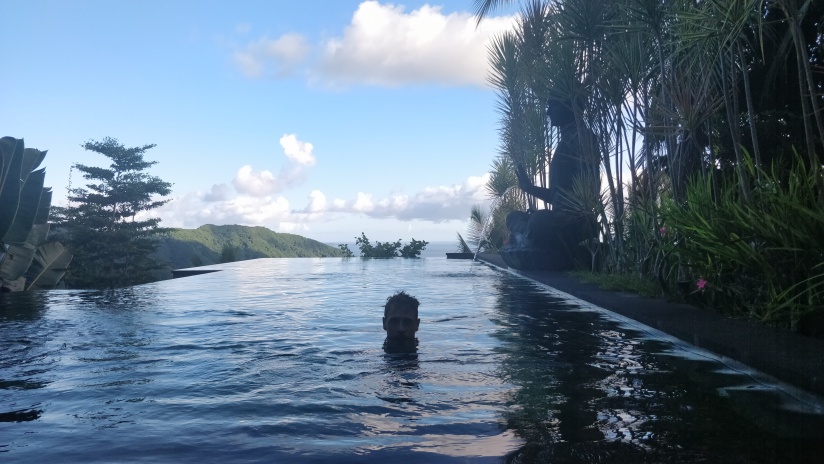 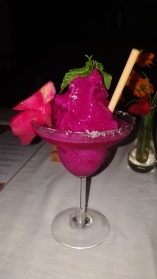 A vegan nasi campur with tempeh and tofu 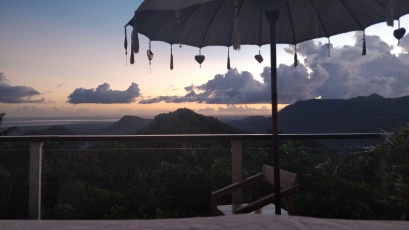 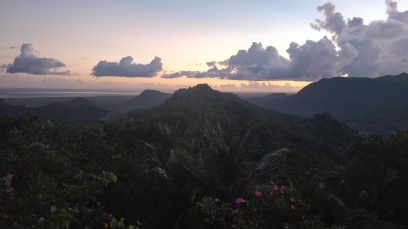 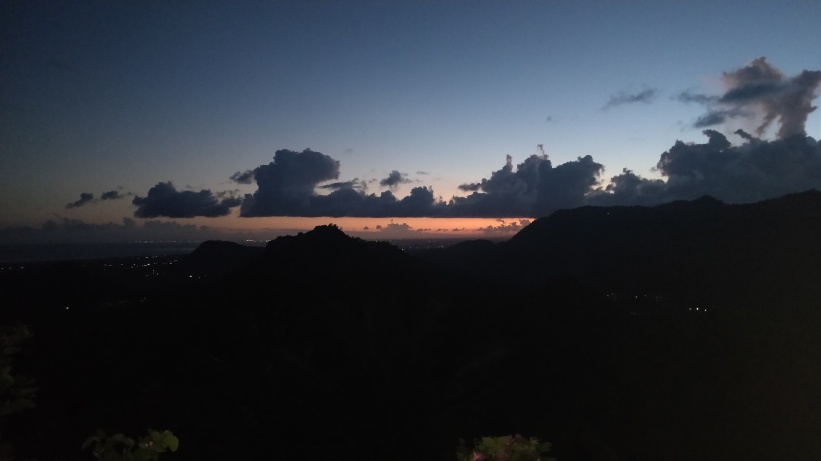 I had told the guest house in advance that it was Pete’s birthday and asked them if they could do something special. I suggested some pancakes for dessert since that’s Pete’s favourite. We ate our meal and waited at the end… but nothing more came and I couldn’t seem to find an opportunity to ask without Pete seeing/hearing… I was quite sad since I had hoped to make a bit of a fuss for Pete. We headed back to the room a bit, but upon getting there, we entered to this: 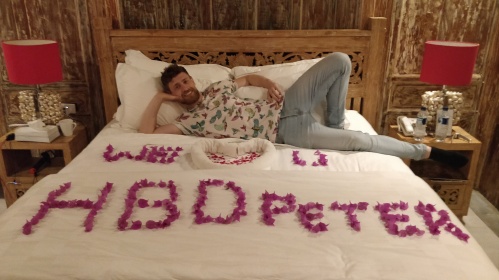 The staff had set a surprise up in our room instead, they had decorated the bed with flower petals, made him some pancakes with candles to blow out and delivered fresh coconuts to us too. All the staff at the guest house came in singing Happy Birthday to him and made a big fuss, just what he needed! Thank you so much Bella Kita!!

It topped off a lovely day for Pete’s birthday and our spontaneous trip to Nusa Penida. If we were to have planned it properly, we would have taken the first boat out in the morning and perhaps planned to stay overnight too before returning in the morning. There seems like there’s so much to do and see on the small island, a few hours just wasn’t enough. Still, even a short time is better than no time 🙂

2 thoughts on “Day Trip to Nusa Penida from Bali”