Stage 3 of our big Easter adventure!

After driving around Northen Thailand for the past 5 days, we decided to change things up a little and hire a moped for our final 2 days in Chiang Mai. If you’ve read previous posts of my travels you’ll know that one of my absolute favourite things to do when travelling is riding a moped. So much so, for my birthday last year, Pete booked us both on a CBT motorbike exam on a 125cc manual motorbike. We both passed and have since bought our own motorbikes in the UK.

So instead of getting a little engine moped, we decided to treat ourselves to a 600cc cruiser. We tested it out at the shop and it seemed comfortable enough for a days’ riding. We grabbed a couple of helmets and off we went… 200m down the road to a breakfast place 😂 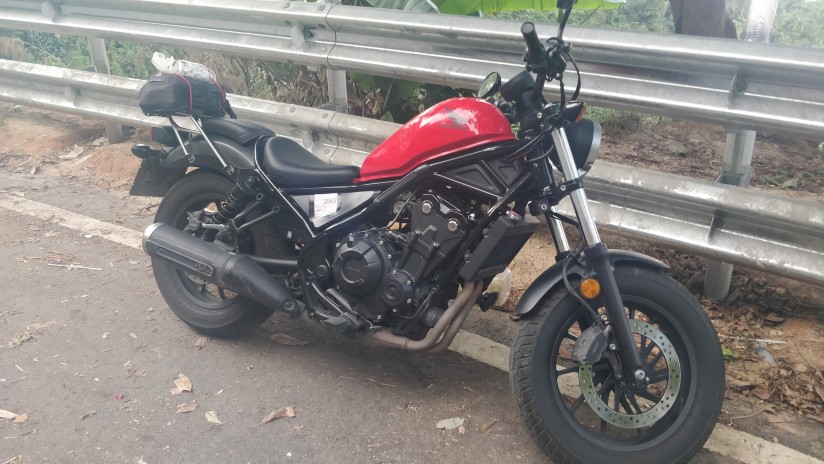 After breakfast, we really set off, and Pete was able to open the throttle a little bit, which resulted in me nearly flying off the back and then clashing heads when he broke. This bike was pretty powerful, but fortunately, we both got used to it pretty quickly after that.

We headed North out of the city towards Mae Sa Waterfall. Immediately on the highway, we were pulled over by the police along with about a dozen other tourists on motorbikes and scooters. Most were getting issued fines or being told off for not having a motorbike license, so our officer was genuinely impressed when Pete whipped out his driving license along with the international driving license I had gotten us both from home. He was even more impressed that it had the motorbike stamp in it, he actually gave Pete a high-five!!! 😂😂😂

After that, it was all smooth sailing to the waterfall, albeit one tiny problem… whilst the motorbike’s seat was comfortable for Pete, perched on the back as a pillion passenger, I was NOT comfortable and we literally had to make regular stops so I could get off and walk a bit to stop my bum from going numb! 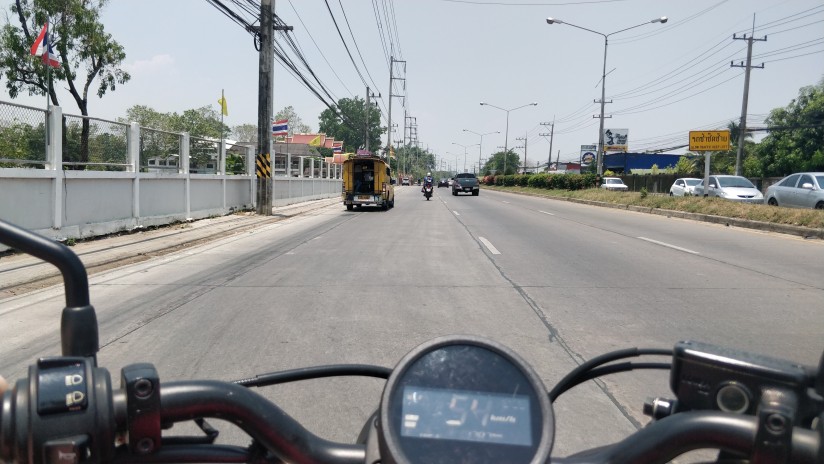 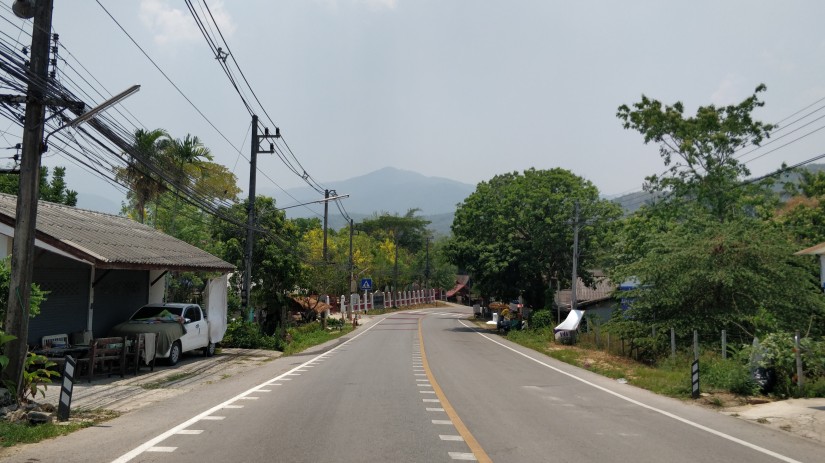 We eventually made it to the waterfall, which was really quite busy with people, although mainly locals. We remembered it was Saturday and almost lunch time now, so there were lots of families stocking up on snacks and food from the shops and carrying them up to the waterfall in little baskets.

The waterfall itself was quite nice, but the brown water was not so appealing when compared to other Thailand waterfalls we have visited in the past, like Erawan falls. Pete got in and had a play in the water, but it was very cold so I stuck to dipping my legs in!

We walked around and played in the waterfalls until we got hungry, so we returned to the car park and used our Thai skills to order some vegan food from a small vendor. She even made my Som Tam salad “nit noi phet”! 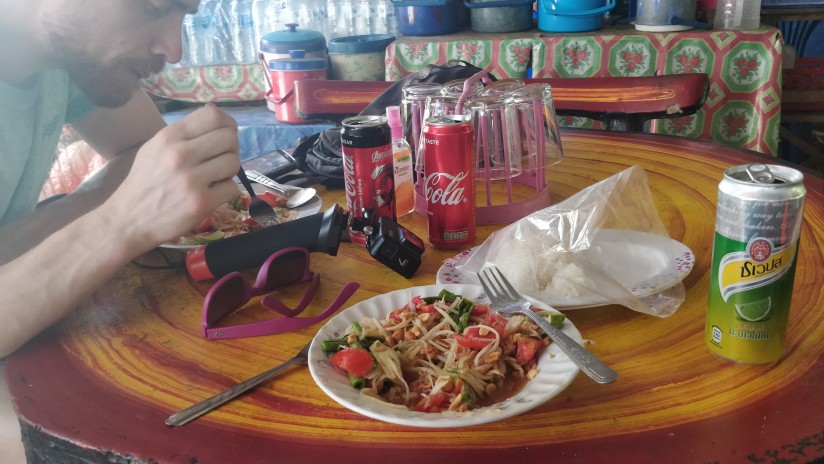 From the waterfall, we headed over to Doi Suthep, just to the West of Chiang Mai. The temple near the top is supposed to be one of very high significance to Thais and Buddhists. It was very busy with tourists and locals and was great for people watching. Especially at the main Chedi, where both tourists and locals would pose in front of it for multiple photos. Some of the poses were very Instagram-ready! I even tried to do one, although I’m not quite as photogenic… 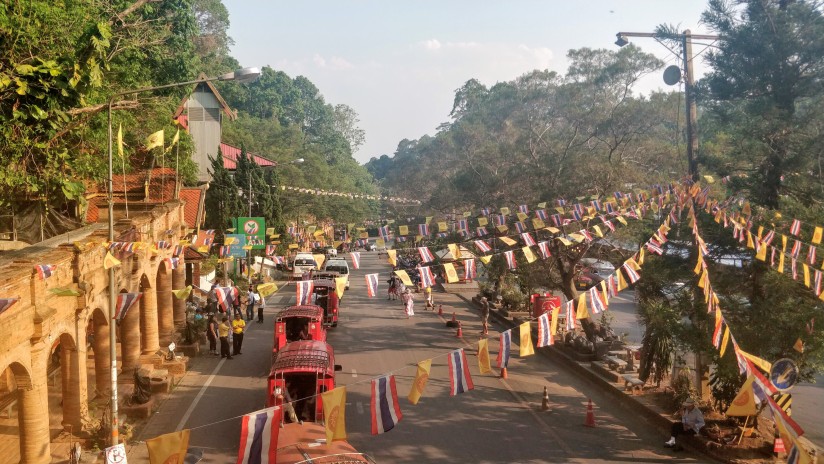 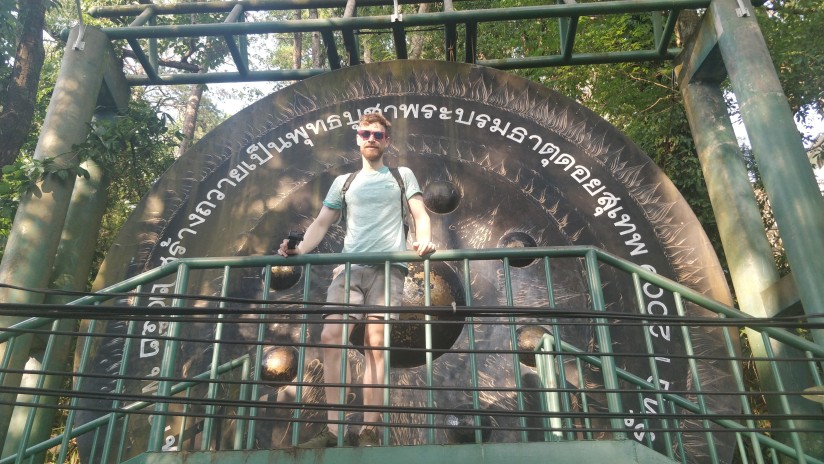 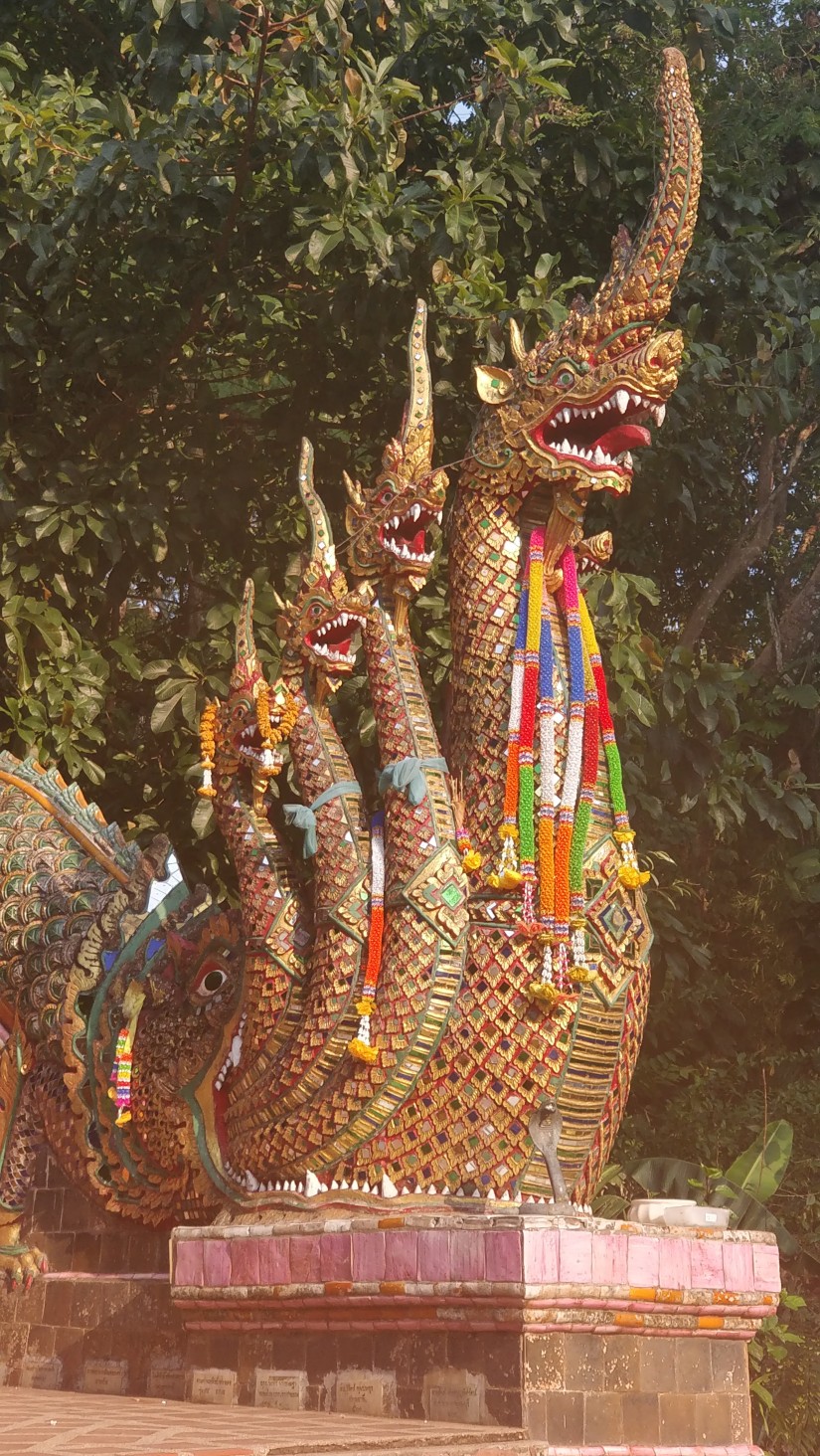 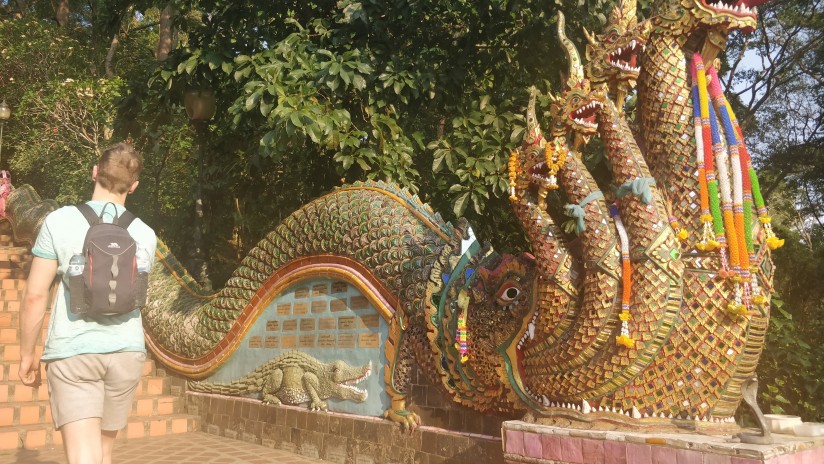 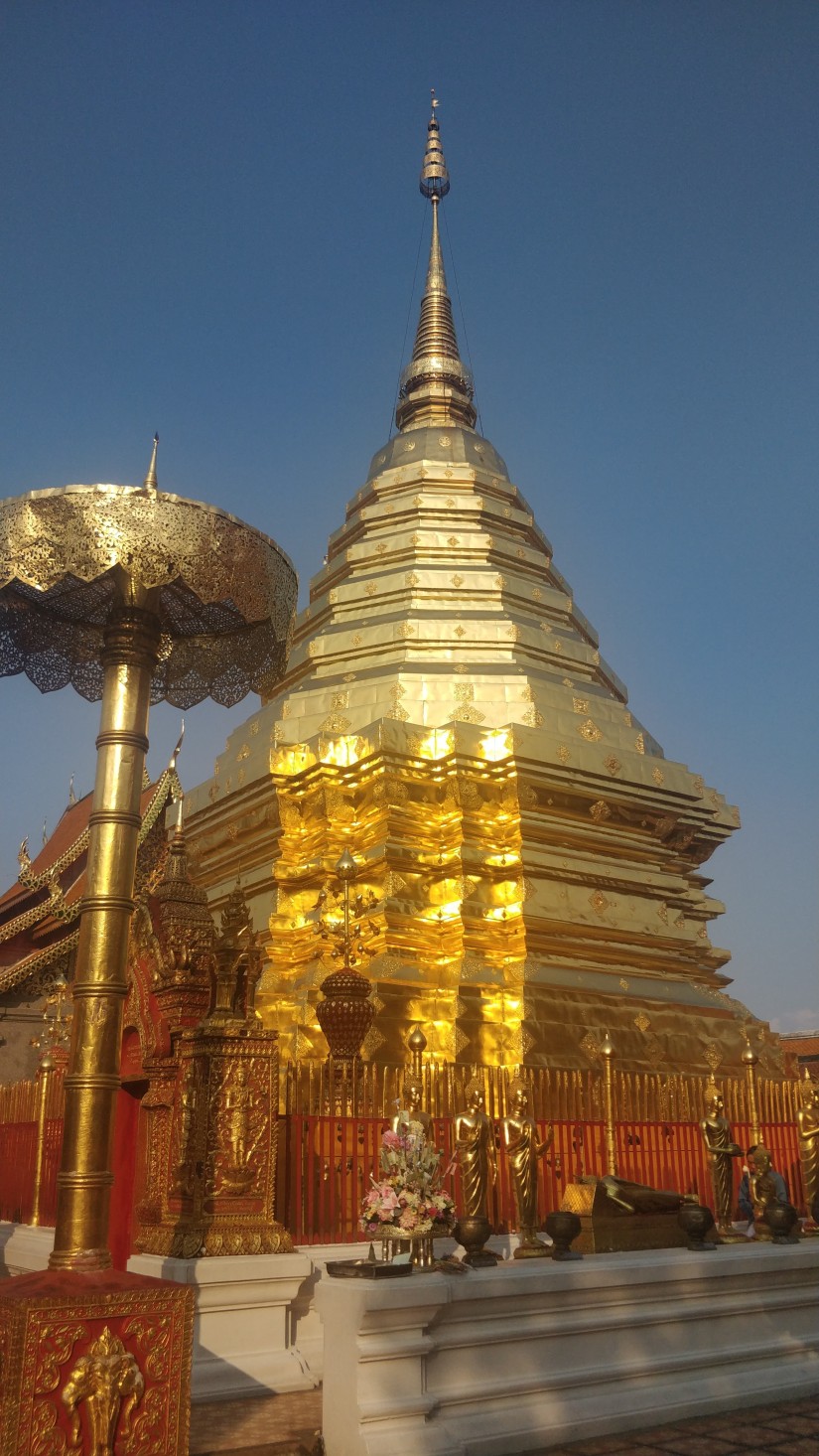 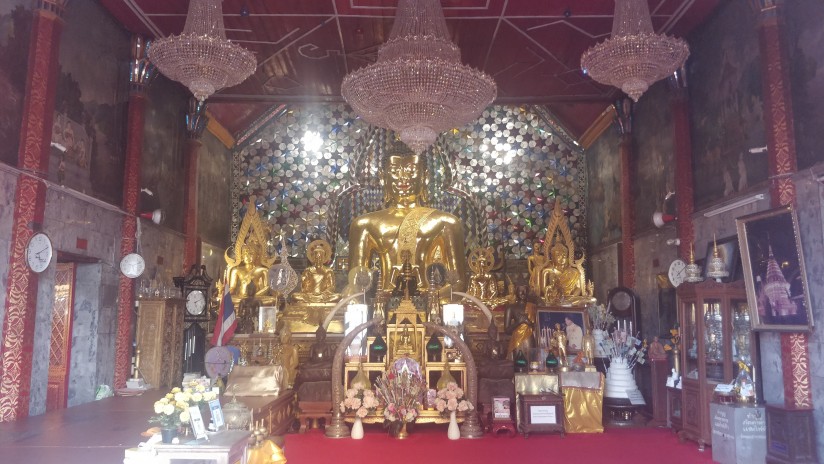 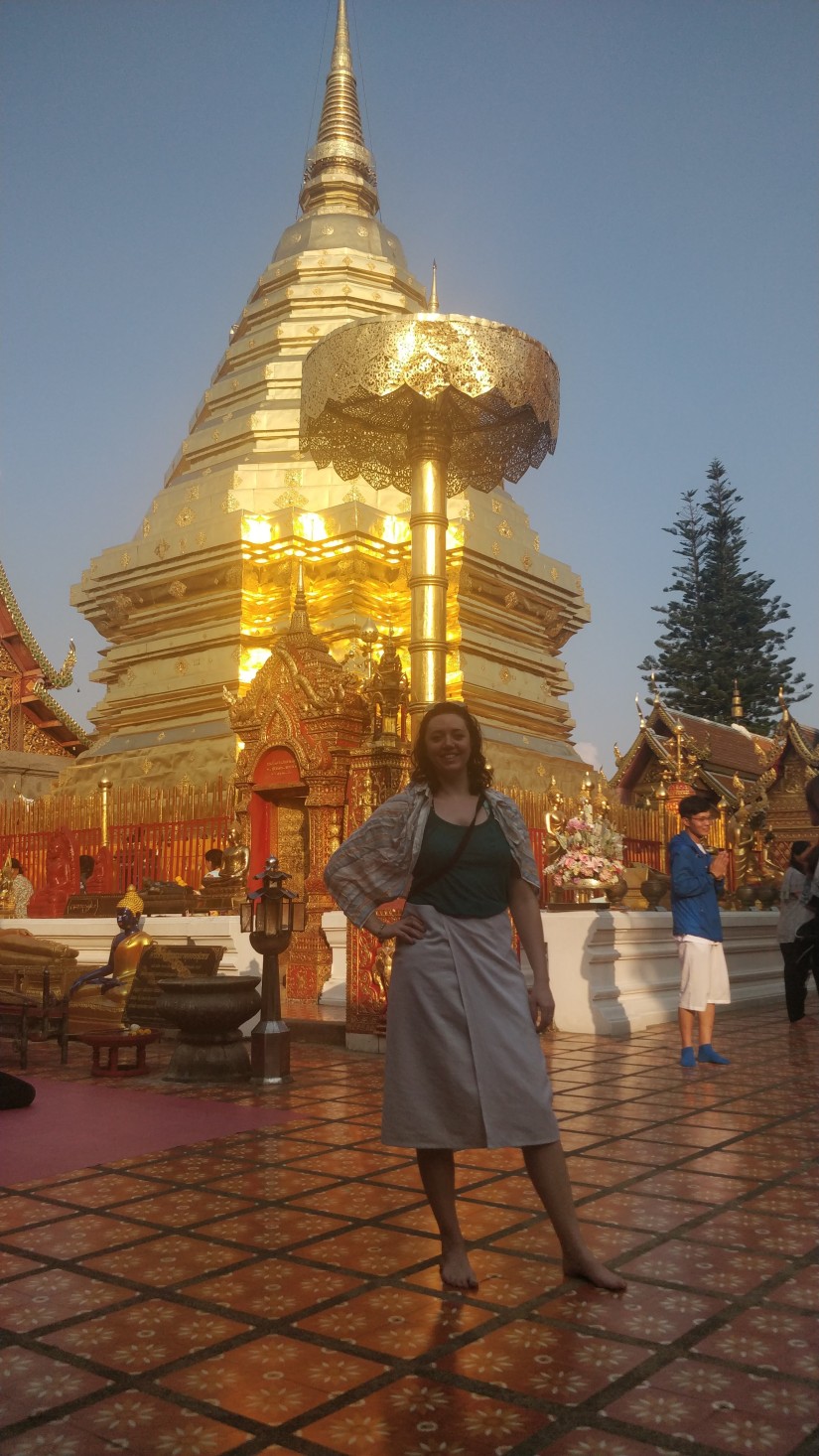 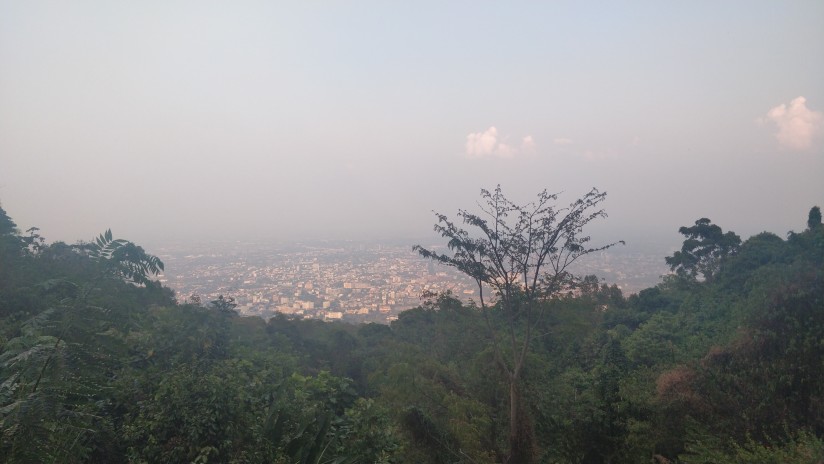 The view of Chiang Mai from the viewpoints let you see just how big this city actually is. We spent a lot of our time in the walled Old town, which makes Chiang Mai feel like a small town, when in reality, it’s far from it and there is much more of the city to explore.

However, not right now, as sadly our 1 week in Thailand was almost over. It had gone so quickly and yet, on the other hand, we felt we’d been travelling for weeks, a strange feeling. We spent the morning on the last day spending of last Baht before catching a flight back to Bangkok, the first of 4 back-to-back flights which would see us end up in Queenstown, New Zealand.

We love Thailand, the food, the people, the culture, the nature. It really is somewhere close to both mine and Pete’s hearts now. We have vowed that we will at the very minimum return to Thailand annually from now on, but the perfect scenario would be to eventually live here. Let hope we can make it happen 🙂