We woke up at 7am the next day to pack up and get the first train out to Kanchanaburi. However, the train station we needed was across town. Anyone who knows me, knows I’m not the best at being on time and about 5 minutes into our taxi ride to the station I declared to Pete that we were definitely not going to make it in time… fortunately there is also a bus station on that side of town which runs public buses to Kanchanaburi, so we committed to missing the train and asked our taxi driver to continue on and take us to Sai Tai Mai station. We got there and were able to board the next A/C bus for around £2 each. We only had to wait 10 minutes for the bus to fill up and depart – the bus was faster than the train, had aircon and stopped in the same place we needed to get our next bus! This was the beginning of Pete learning how lucky I am when travelling! To be honest, we should have done this in the first place! 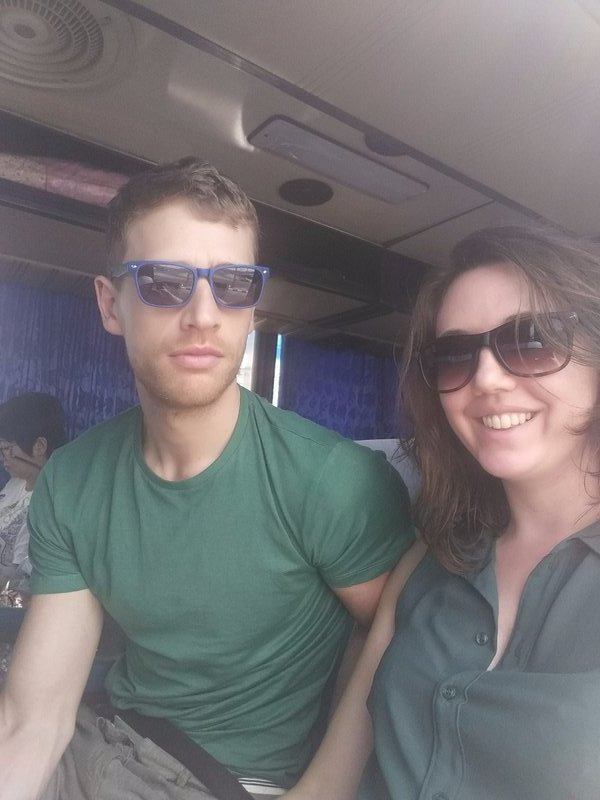 We arrived at the bus station in Kanchanaburi and hopped onto the next bus along which was going to Erawan National Park, home to the 7-tiered waterfall I had visited and loved in the past. We got on the bus with a minute to spare. The bus to Erawan was funny, it looked like a disco bus and struggled to get up the smallest of hills, my google tracker thought we cycled some of it, it was that slow! However, the journey is nice as the scenery is beautiful as you drive alongside the river and through small villages in the hills. 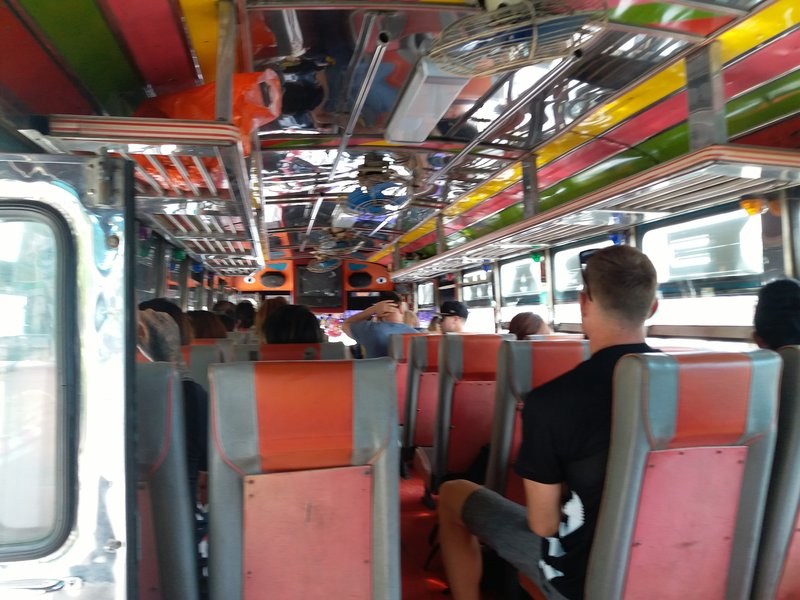 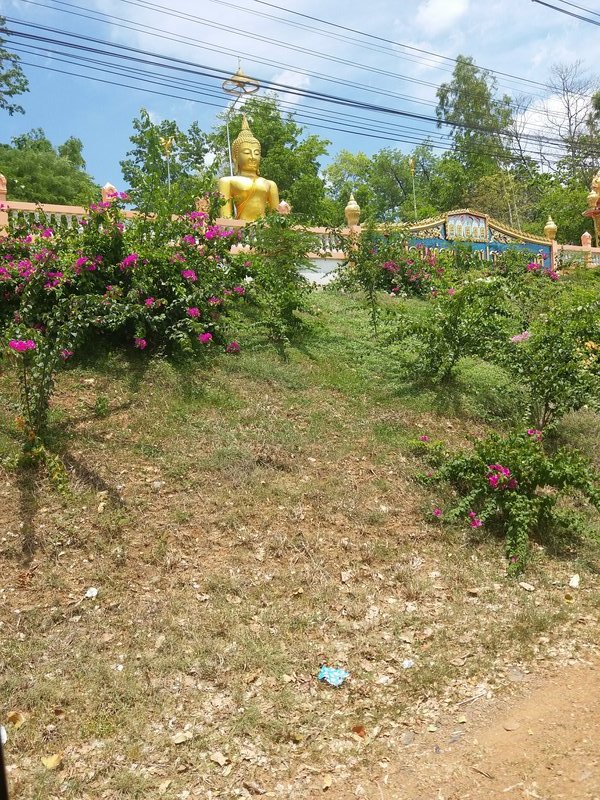 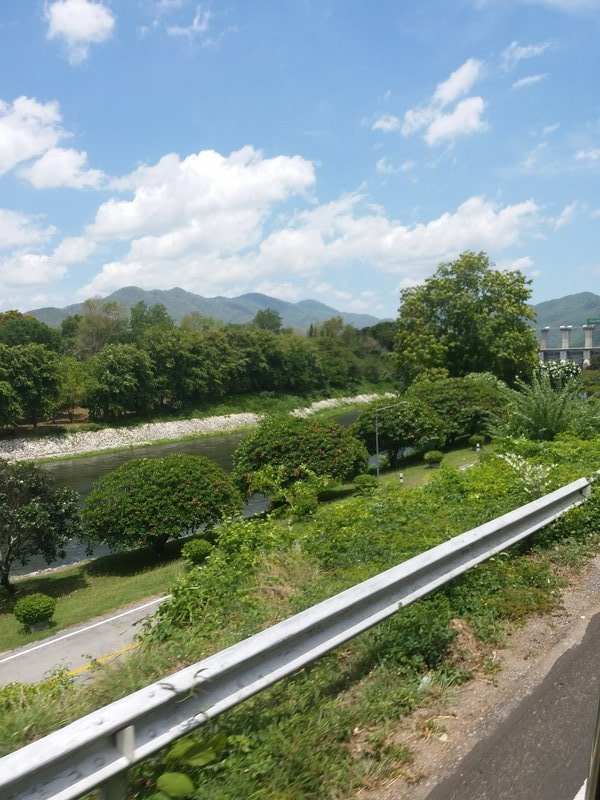 Beautiful scenery all the way 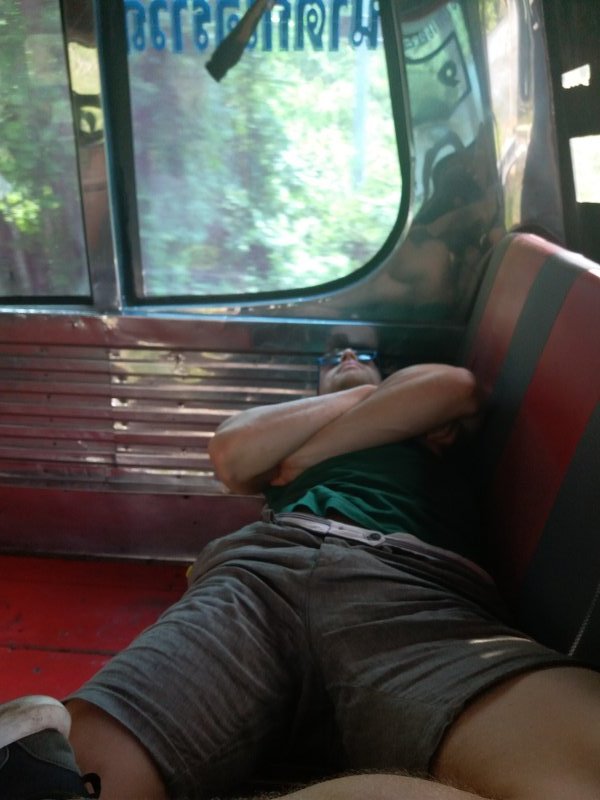 Since we had the whole back row, Pete took the opportunity to get more rest! 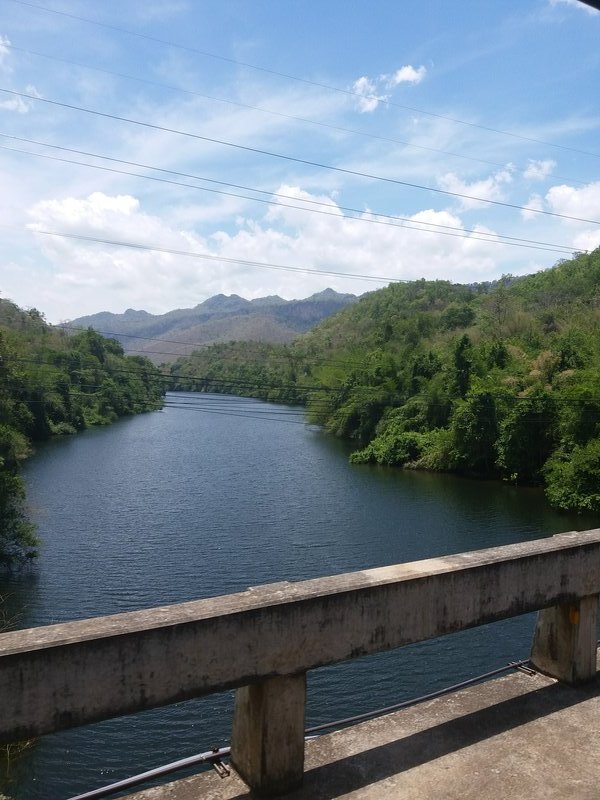 Crossing the river to enter the park

As soon as we arrived, we headed down to the park rangers office to try and rent out one of the small bungalows that are inside the national park. Fortunately, there was one the A/C available, but check-in was only from 2pm, so we ate and chilled at one of the restaurants nearby. 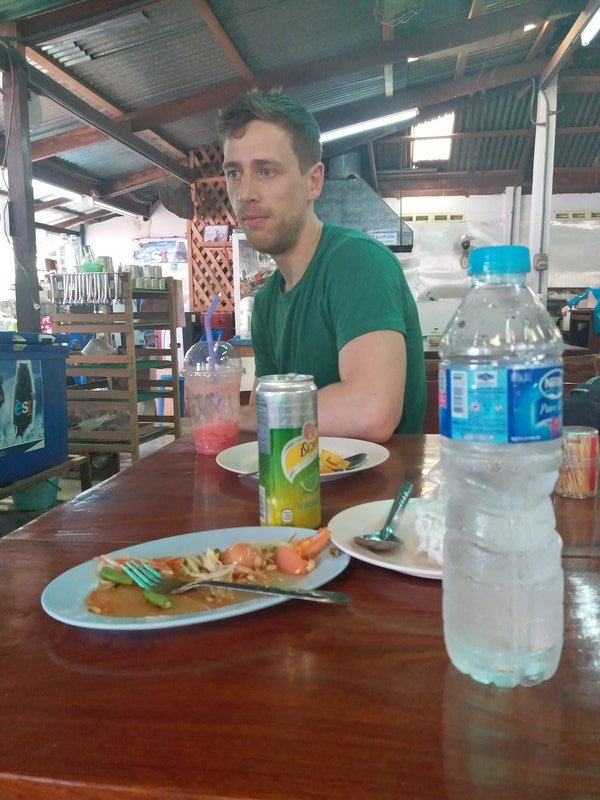 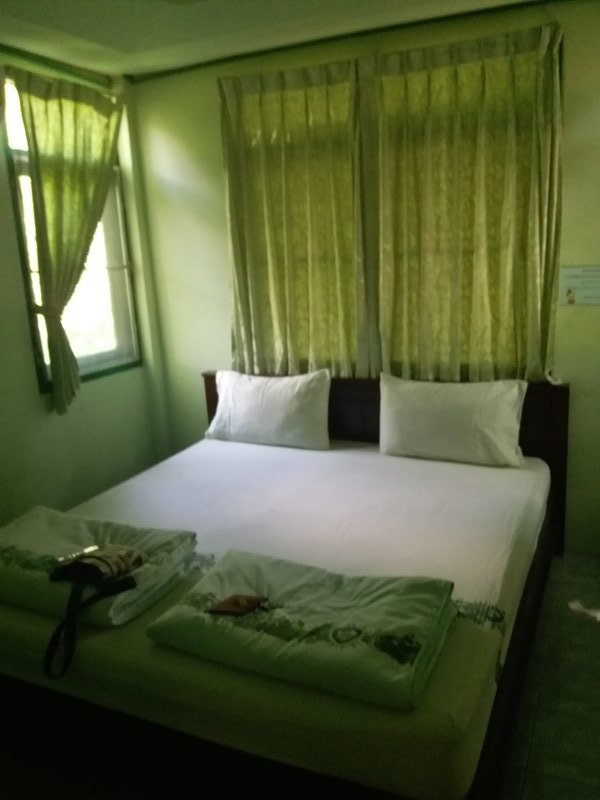 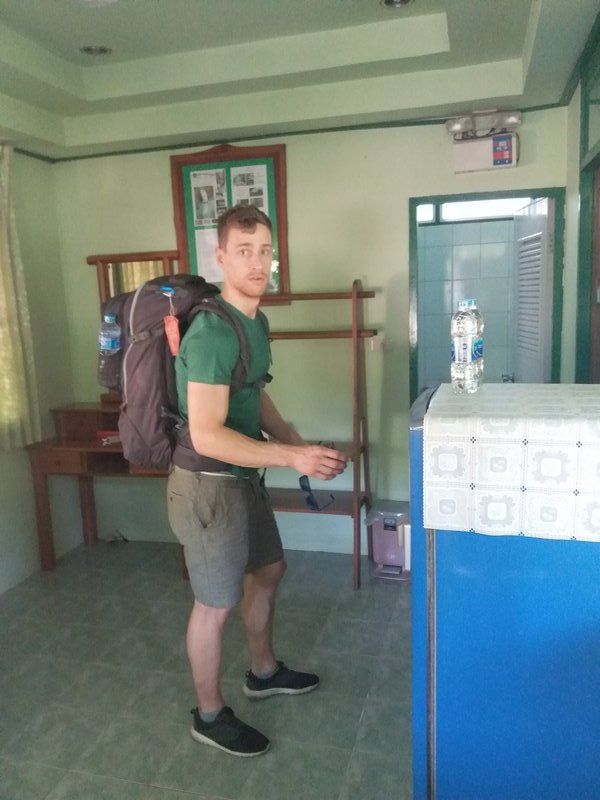 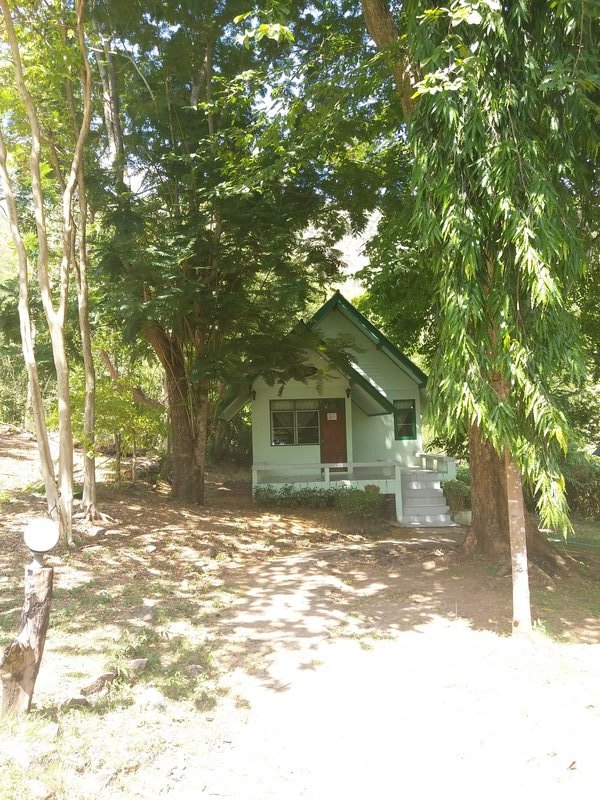 By this point, it was getting late, as the park closes at 4pm, but we headed out any way to scout it out for the next day! 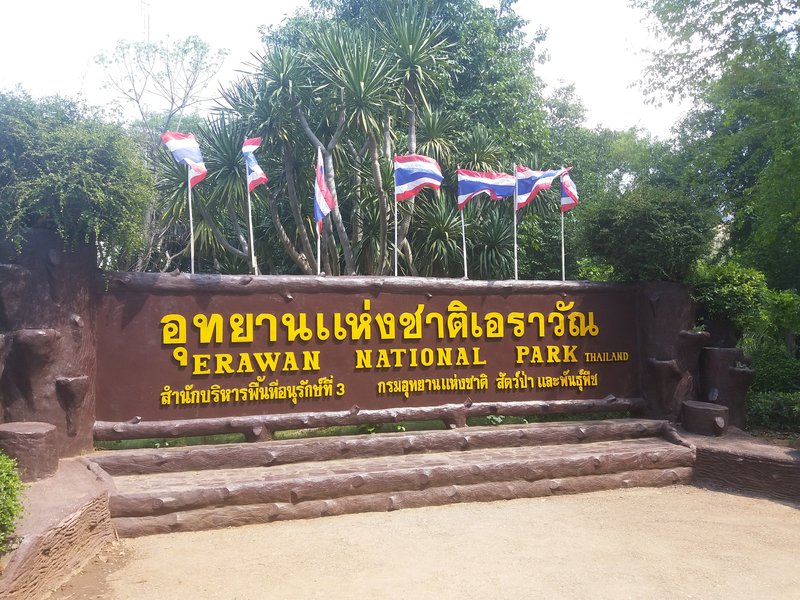 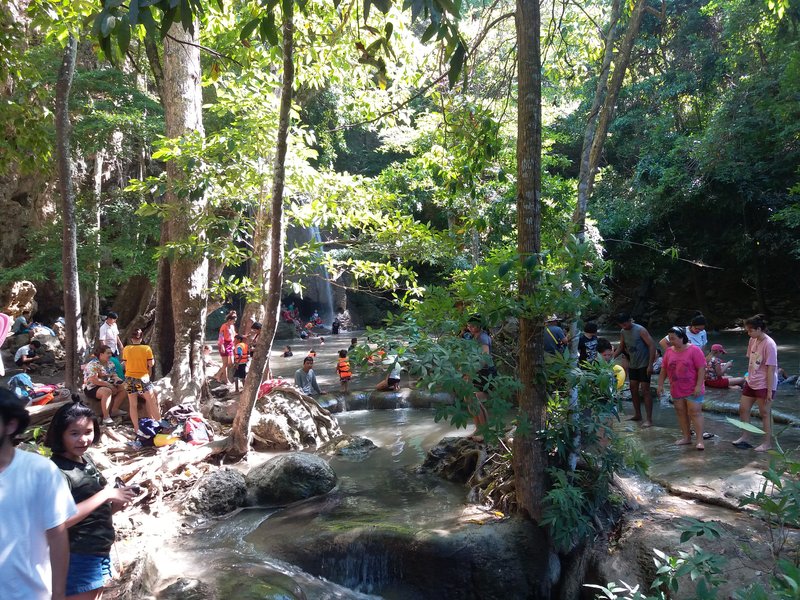 With it still being a thai holiday, the park was rammed! 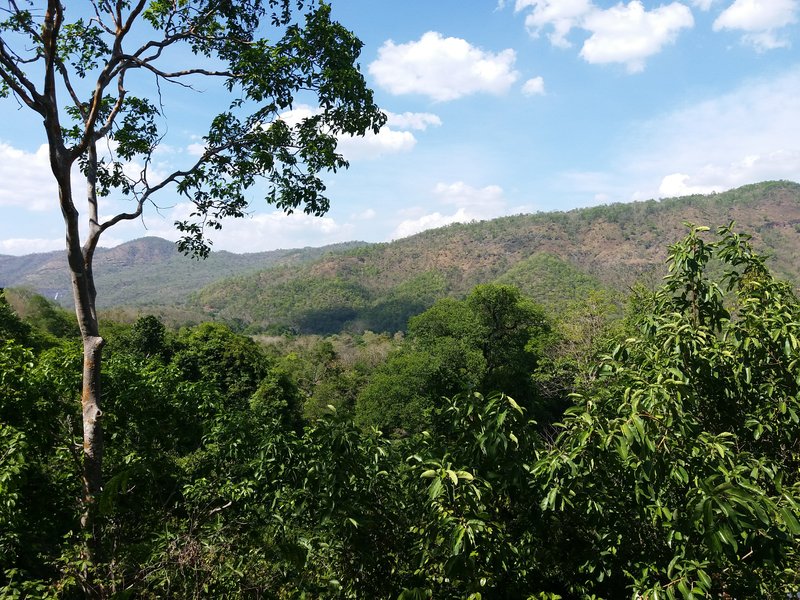 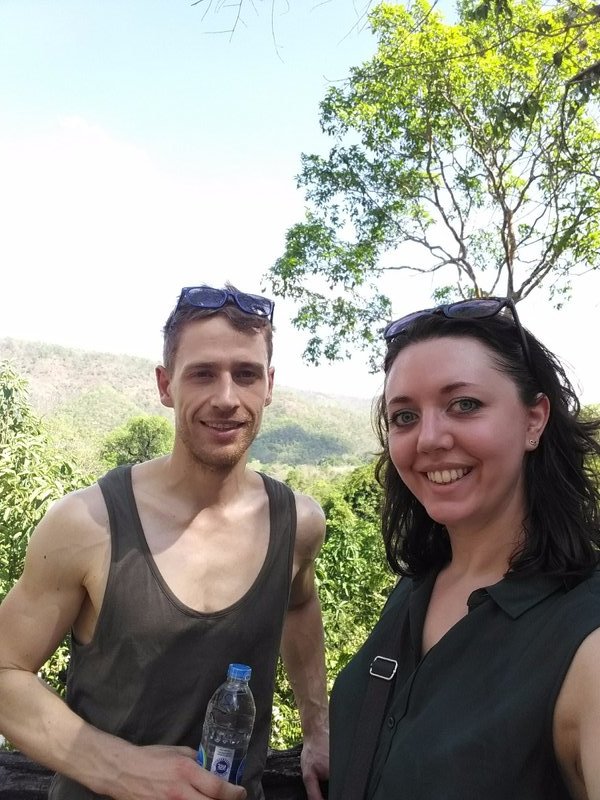 But we did manage to find some peace in the nibbly-fish pond! 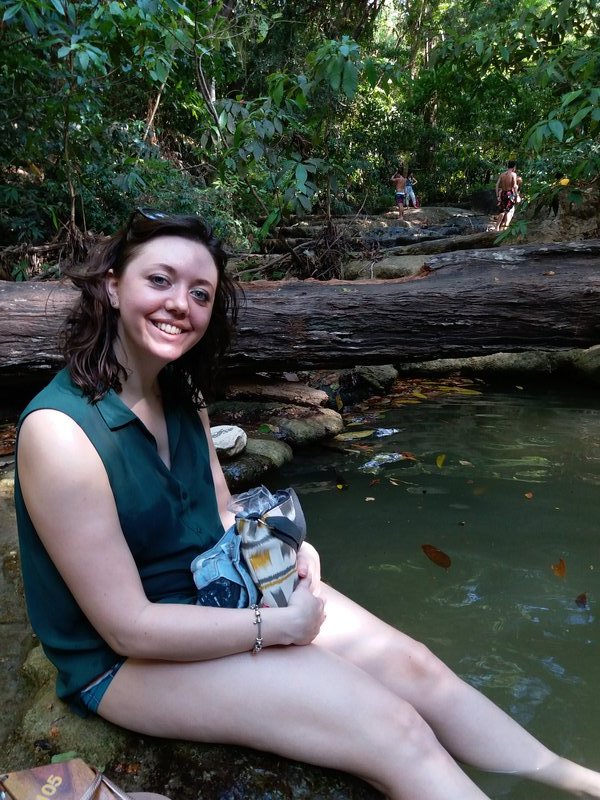 Getting my feet nibbled

It went dark fast that night and since we were in the middle of a national park with not much to do, we got an early night ready to get up early the next day to be first at the park… if only I had remembered to set an alarm… So we got to the park at about 10am in the end (oops), but it was still nice and quiet. We headed straight to tier 5 where the is a deep pool and some slippery rocks you can slide down. It was really fun just playing in the water and trying to avoid the massive fish! 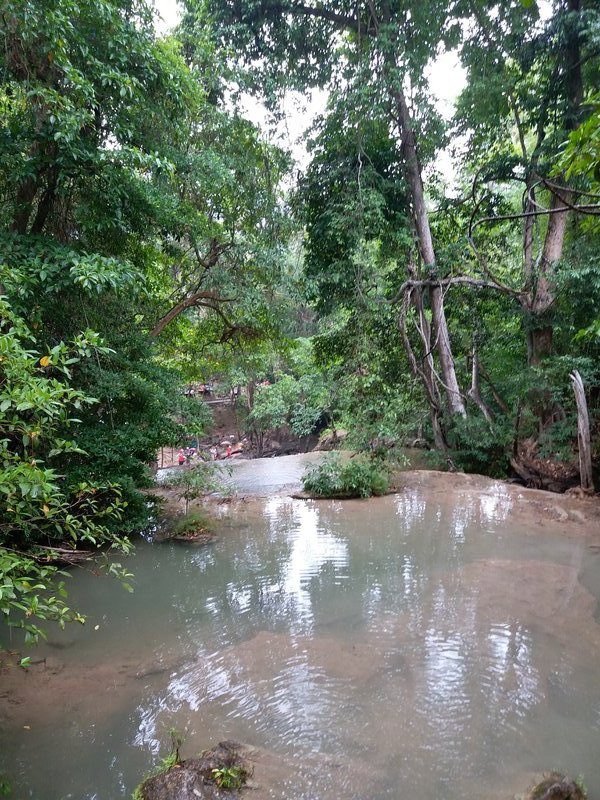 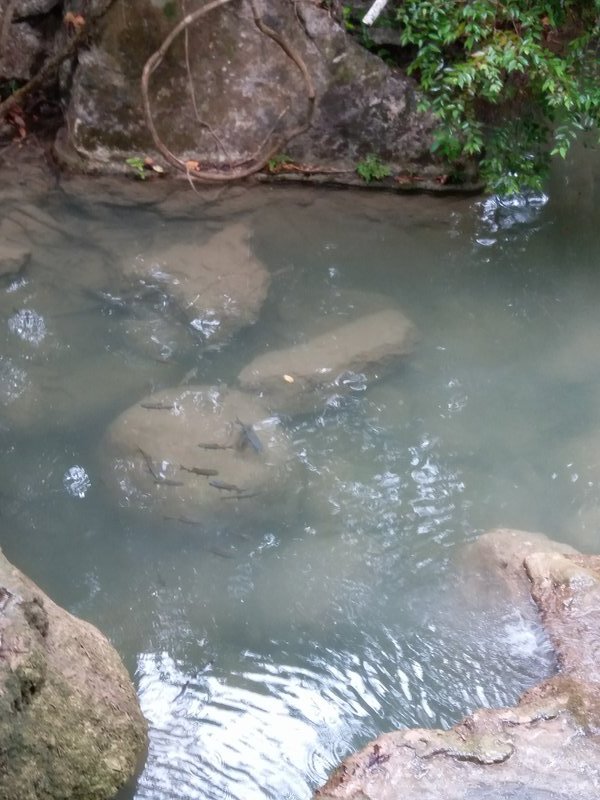 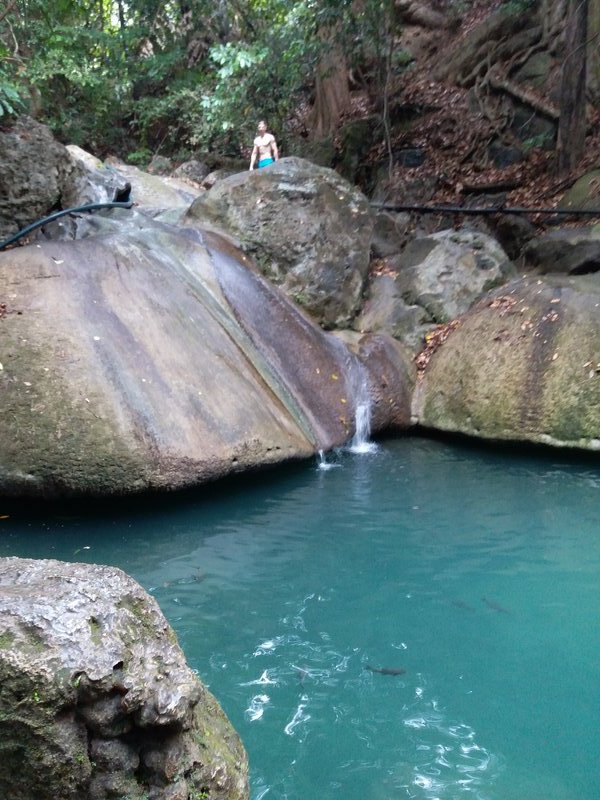 From here we walked up to tier 6 for a chill looking out over the valley. 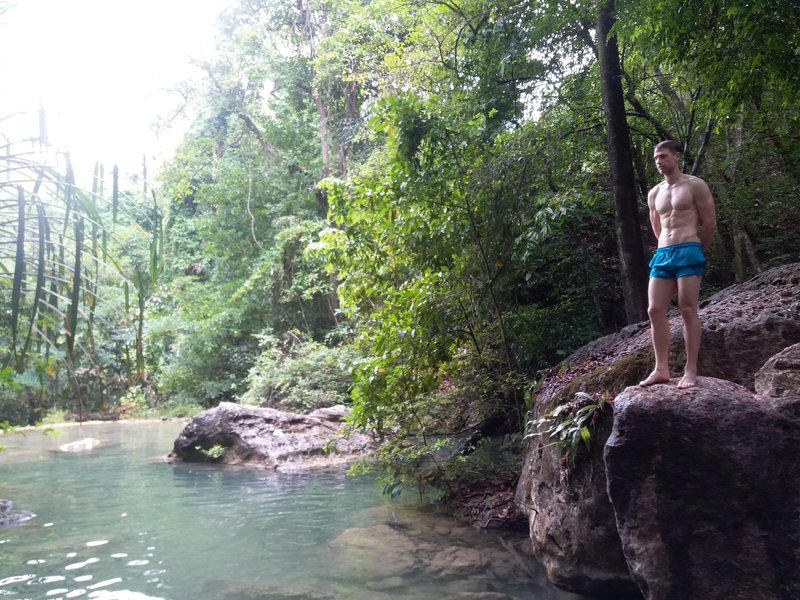 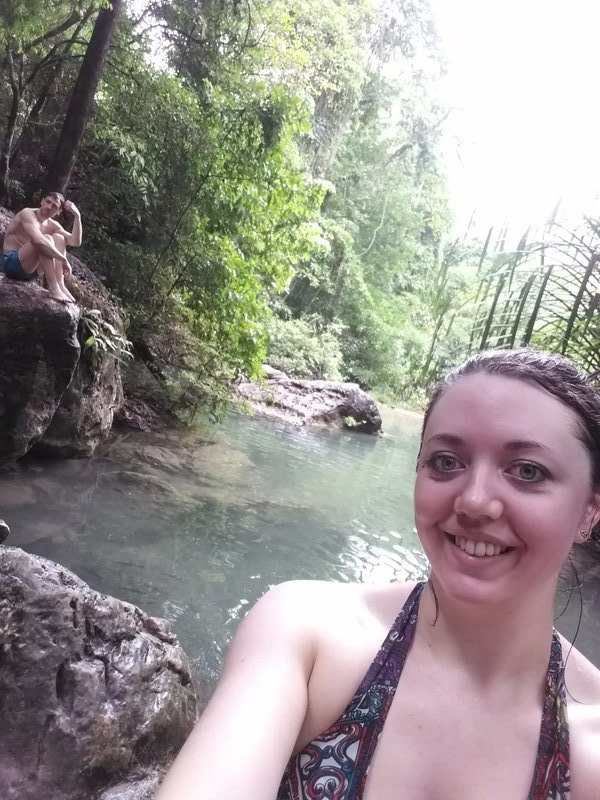 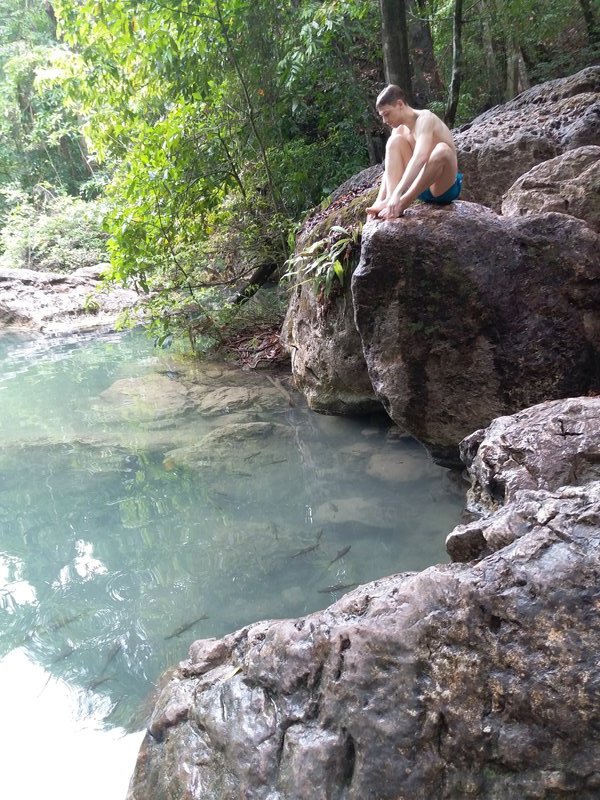 Big fishies in this one too!

Conscious of the train we had to catch that evening, we then headed back down to tier 3 for a short while before we got a little overwhelmed with mossies. However, on the way out we saw a collection of butterflies which Pete managed to film in slow-mo, it was beautiful. Again, to save some time (and sweat) we grabbed one of the golf buggies that run to and from the ranger’s lodge and made it to the bus perfectly with about 1 minute to spare! 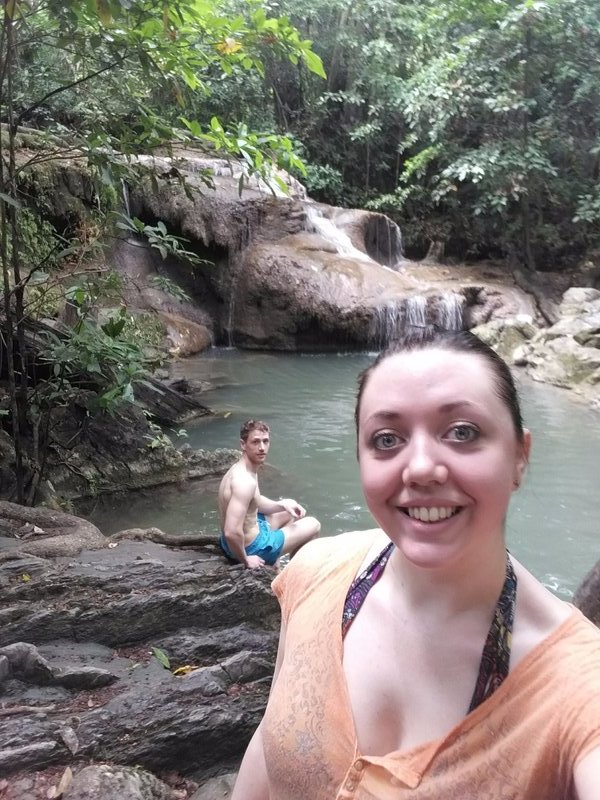 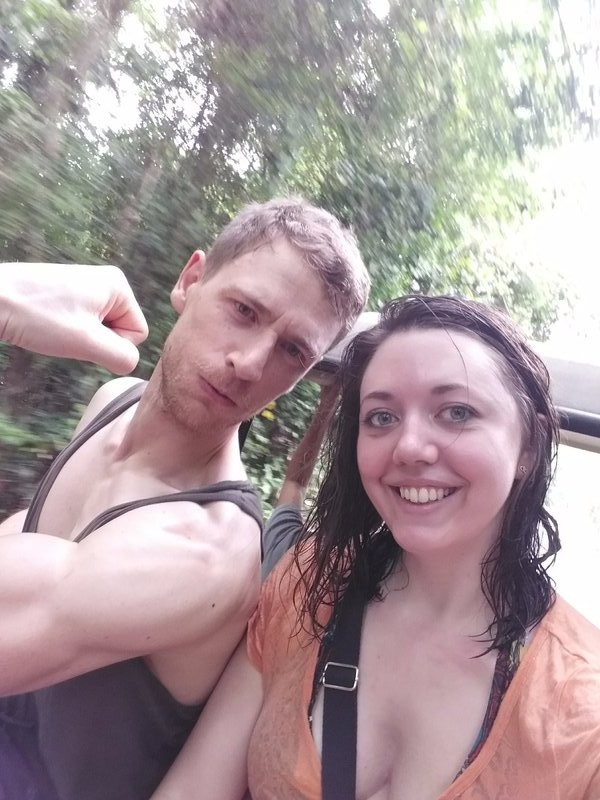 Unfortunately, we weren’t so lucky on the bus out of Erawan, and it was packed to the max. Pete gave up his seat halfway through the journey, but ended up in the aisle getting slept on! 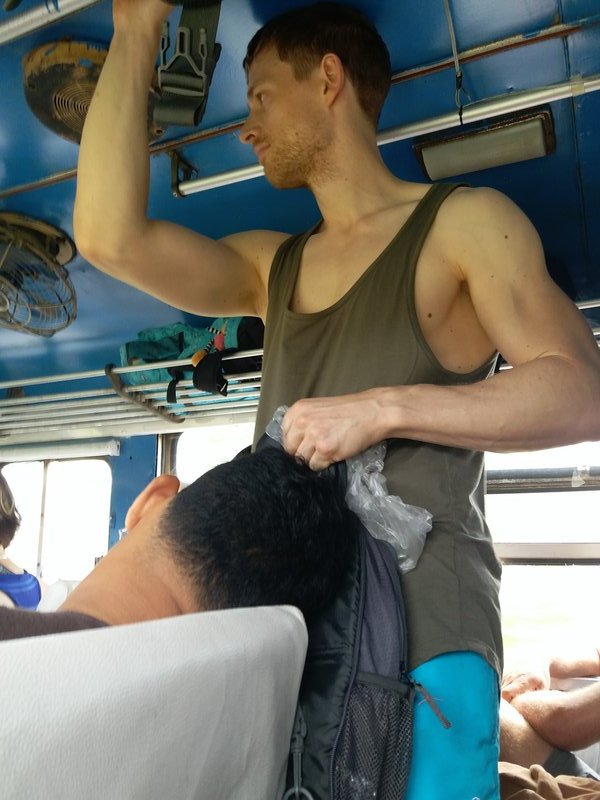 The initial plan was to get a bus from the park back to Kanchanaburi, then the bus back to Bangkok, then a taxi across Bangkok to the train station to board our overnight train to Surat Thani. However… Songkran hadn’t stopped for the people of Kanchanaburi and it took us almost 2 hours to drive at walking pace through the festivities of the town. This ate up our entire 90-minute buffer… we were going to miss the train. The only part of the holiday I had booked beforehand…. We were getting stressed out… So I did some research on my phone. Thank god we got a Thai sim card, and that we had a small portable charger. After about 5 minutes I found out that the train from Bangkok stops at a station in Nakhon Pathom, a town we were also due to drive through in about 20 minutes – we had the perfect solution! I ran to the front of the bus to ask if we could stop, and 20 minutes later we were dumped in the middle of Nakhon Pathom. A short taxi ride took us to the train station where we double checked the train times and our tickets before heading out to briefly explore the town in the 2 hours we had to wait.

Straight out of the train station you can see the famous chedi of Nakhon Pathom; the tallest stupa in the world apparently and one of the oldest in South East Asia, supposedly built in 193 BC. So we headed along the street to get a closer look. We grabbed a really tasty pad thai from a street food vendor for about 50p each on the way. Probably the nicest pad thai of the whole trip! I was actually really glad we got to stop here and spend a few hours in the town! 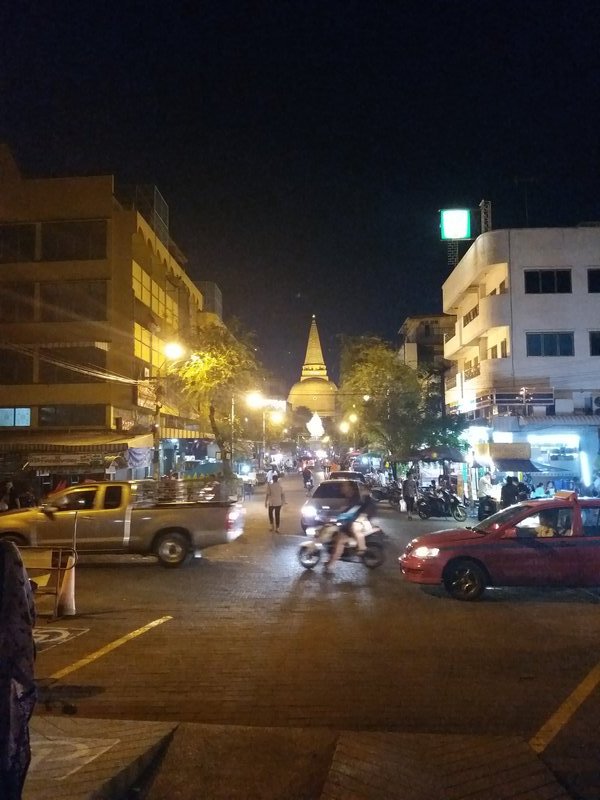 Stepping out of the station 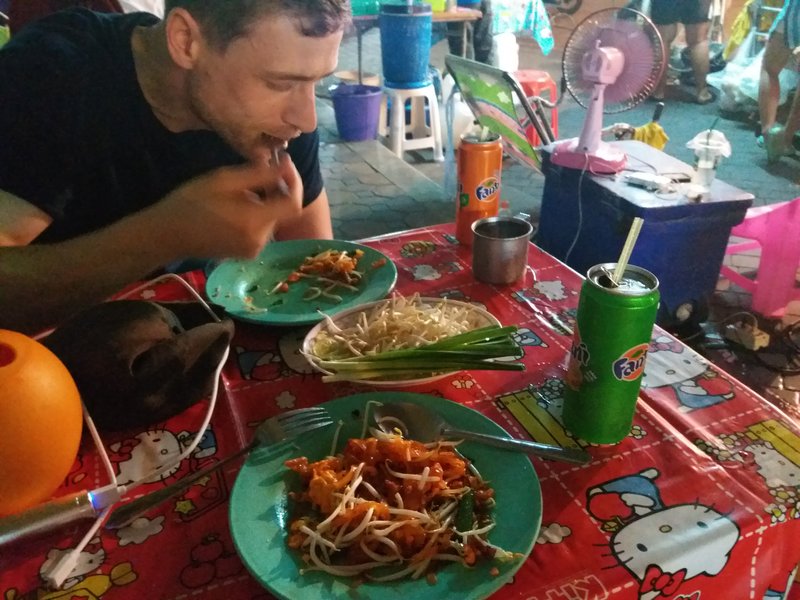 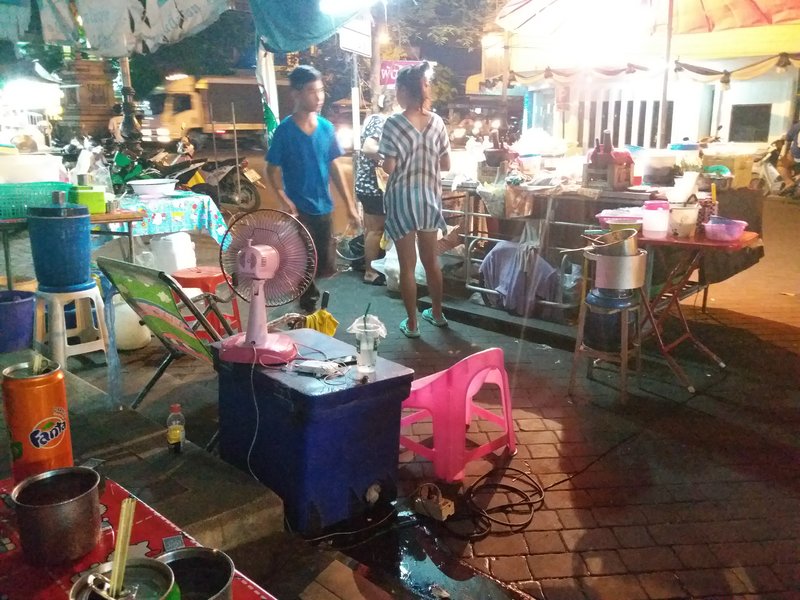 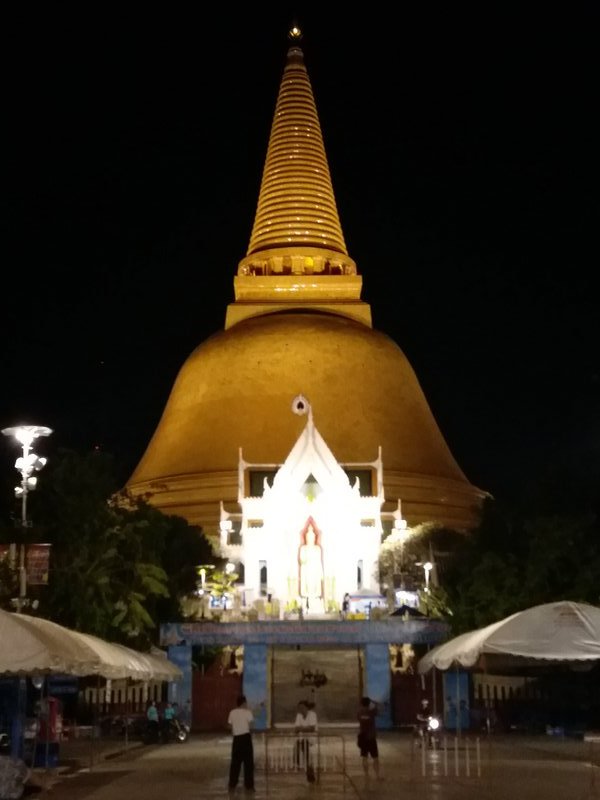 We headed back to the station to catch our train at 9pm and was shown to our modest first class cabin! We would arrive in Surat Thani the next morning at 7am!

2 thoughts on “Playing in Kanchanaburi”