The flight to Bangkok was fairly uneventful; my Grandad dropped us at the airport and we had a slight delay before boarding our 7.5-hour flight to Abu Dhabi. Pete was very impressed though as I prebooked him a vegan meal for the flight

and we also found a vegan coffee (almond milk) shop at the airport. I was off to a good start! Another 6 hours later and we landed in Bangkok! Woo!

As I said in the last post, I have been to Bangkok several times before (read my previous posts on Bangkok here, here, here and here). I loved the city, but I had never been in Bangkok during Songkran; the Thai new year water festival where everyone takes to the streets in a giant water-fight!

I booked 3 nights accommodation on the outskirts of the tourist district of Khaosan Road. Close enough to the action to walk there, but far enough away to be peaceful. To get there we got the airport rail link to Phaya Thai and hoped to get a taxi from the station to the hotel. However, it was slim pickings on the taxi front and we ended up settling on a relatively cheap tuk-tuk to out hotel… what a great introduction for Pete to Thai driving! The tuk-tuk driver was insane! We were weaving in and out of traffic, reaching speeds of about 50mph on the busy roads and braking far too late for everything. It was a white-knuckle ride, but we did eventually reach our beautiful hotel.

After a small nap and a shower, we headed out towards the Songkran area, walking along Phra Sumen and Phra Athit. We stopped for food at a small restaurant along Phra Athit; Pete’s first taste of Thailand. I recommended the Pad Thai to start and I got a Penang Curry. I got the best compliment from Pete ever when he was shocked at how they both tasted like my home-cooked Thai meals! He now appreciates my cooking even more! 😀

From here we walked over to Khaosan and Rambuttri Streets where most of the water fighting was taking place… Oh my god… I had experienced Songkran before in Chiang Mai. I thought it was crazy there, but this was another level! It’s hard to explain what it’s like but I did manage to capture a quick video with my phone in a plastic bag! 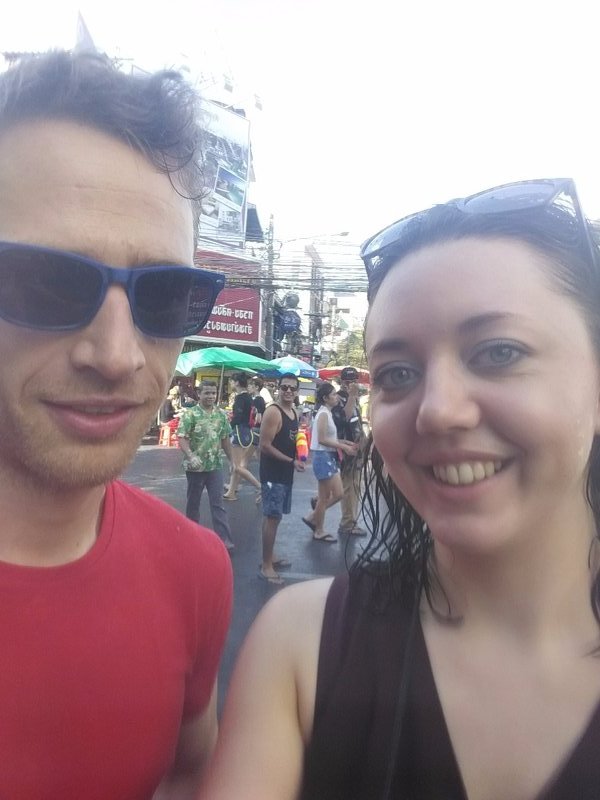 Jet-lag was still on us, so we headed back sodden for another nap and that evening my HappyCow app directed us to a vegan restaurant not far from our hotel called May Kaidee’s which was delicious!

Back in the UK, Pete used to do a lot of Muay Thai, so one big desire for him was to visit a Thai boxing gym for some training, as well as to watch some Muay Thai at a stadium. We had a look at some of the local gyms and Pete decided to visit Sor Vorapin Gym which was close to Khaosan. I went with him as I thought it would be interesting to watch, and I wasn’t wrong! It was great watching… and Pete was really very good, I was so impressed! Even the trainer was impressed with him! It was especially impressive because of the intense heat; there was no aircon, just a single fan (which was in the seating area I was sat in!). 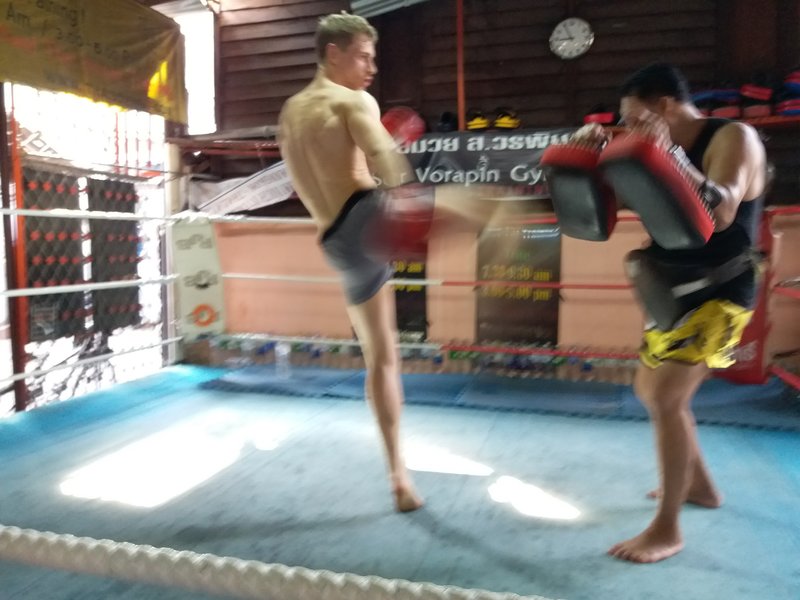 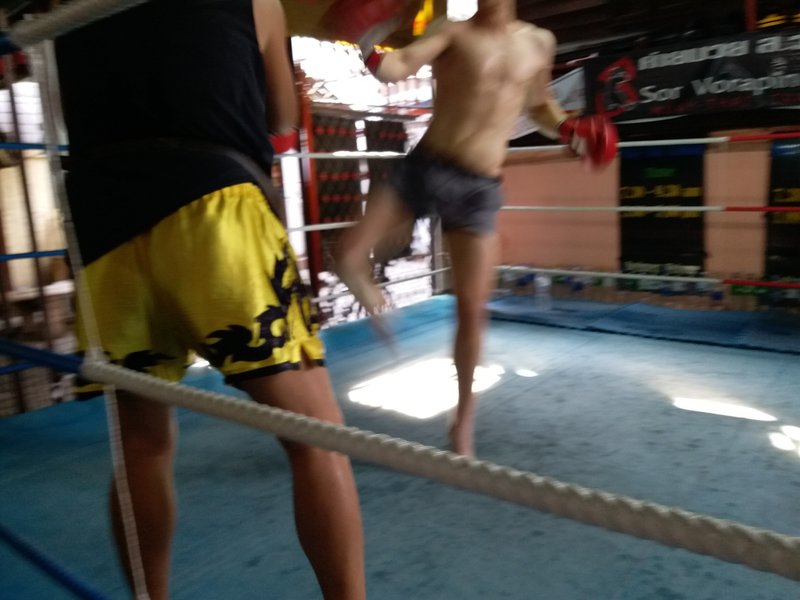 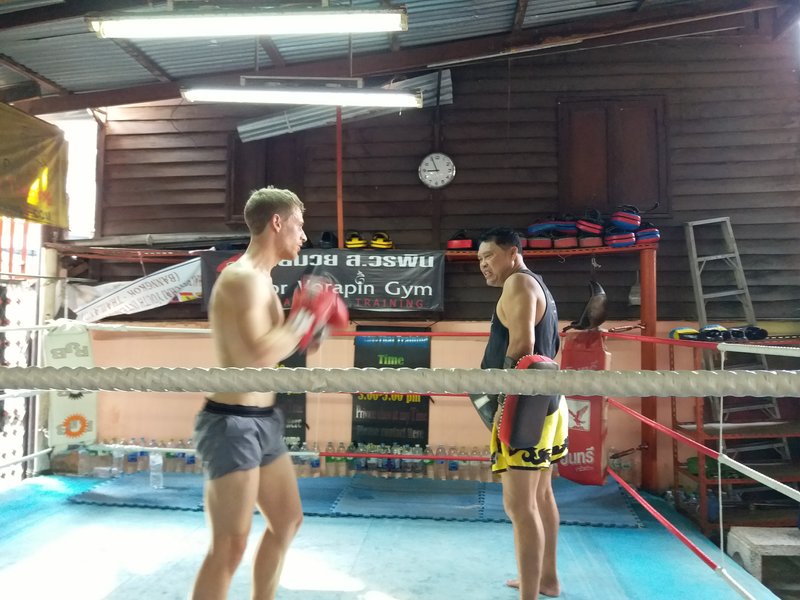 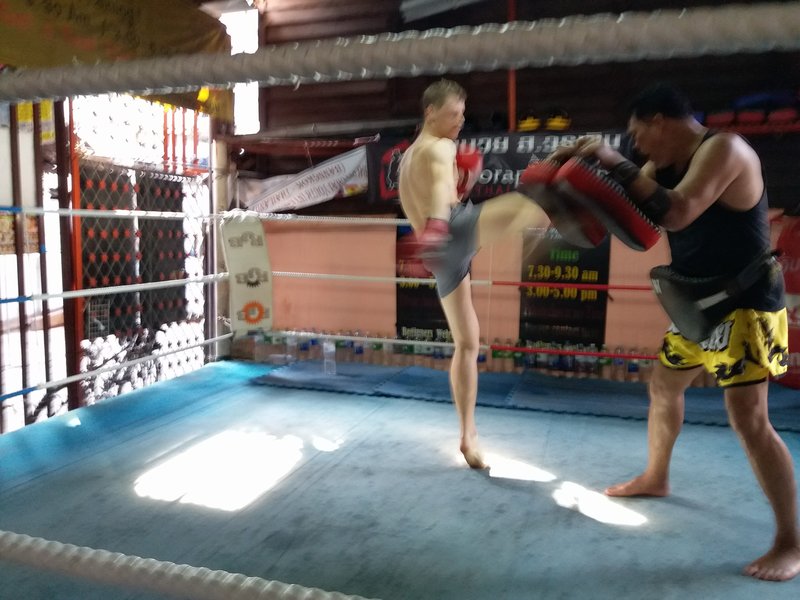 The trainer seemed to like Pete and made him work really hard. They also had a few laughs which was nice!

We also got chatting to an American couple, Libby and TJ, who live in the UK. They were both doing the training. Pete got paired with TJ in a few of the sessions. 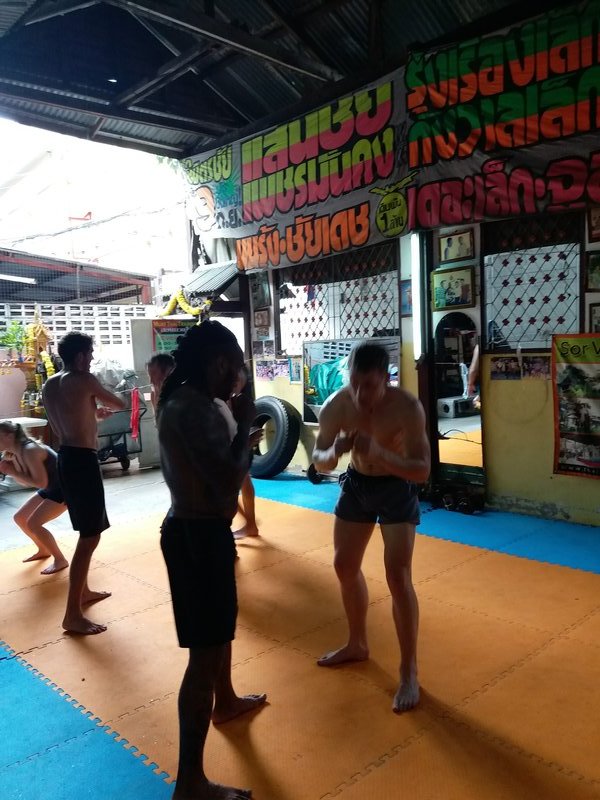 After the session, Pete was very hot and very sweaty, so we walked back to the hotel for a quick shower and sit in the A/C. Once cool we headed out to a HappyCow favourite; Mango. The food here was really delicious and the staff were impressed with my (extremely basic) Thai when I asked for the bill with a simple “Gep dang”!

From Mango we walked through the backstreets of Bangkok over to the Golden Mount, or Wat Saket. Half of the walk was beautiful amongst gardens and in the shade, whilst on the other side, it felt like we were baking alive! 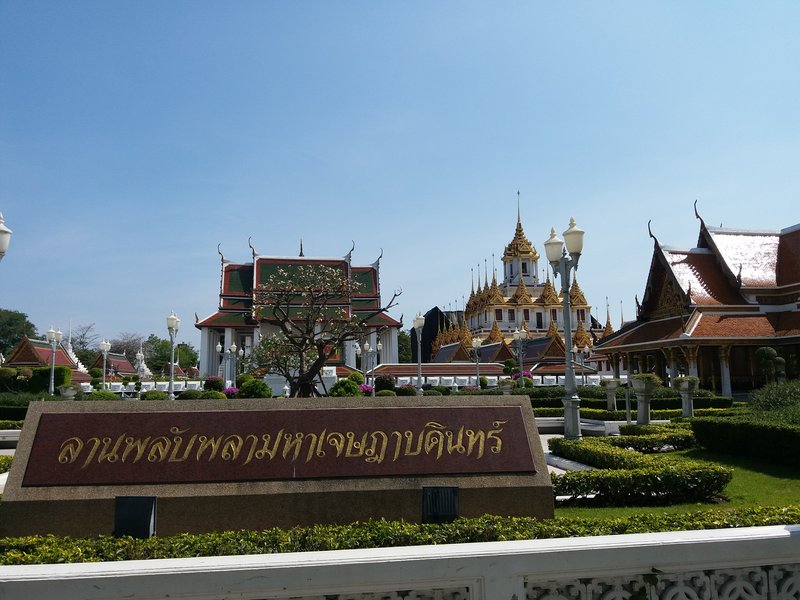 The Royal Pavillion on the way to Golden Mount 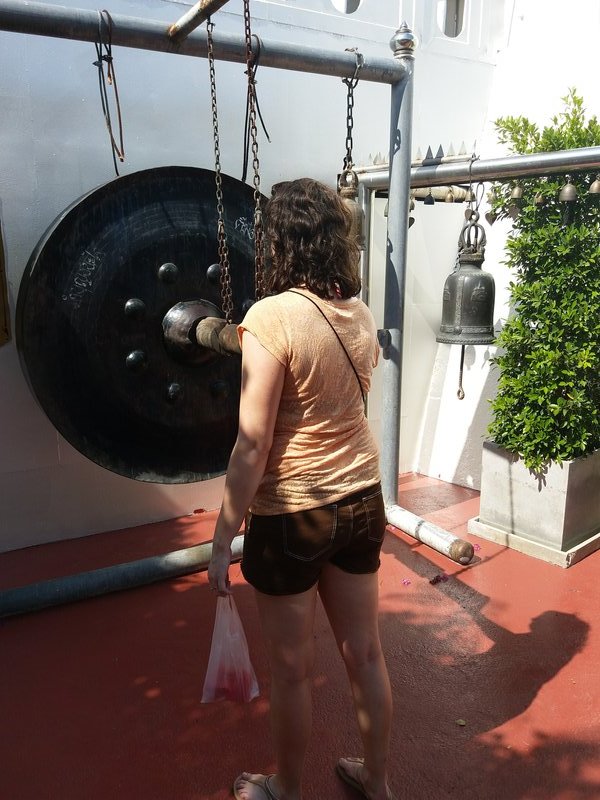 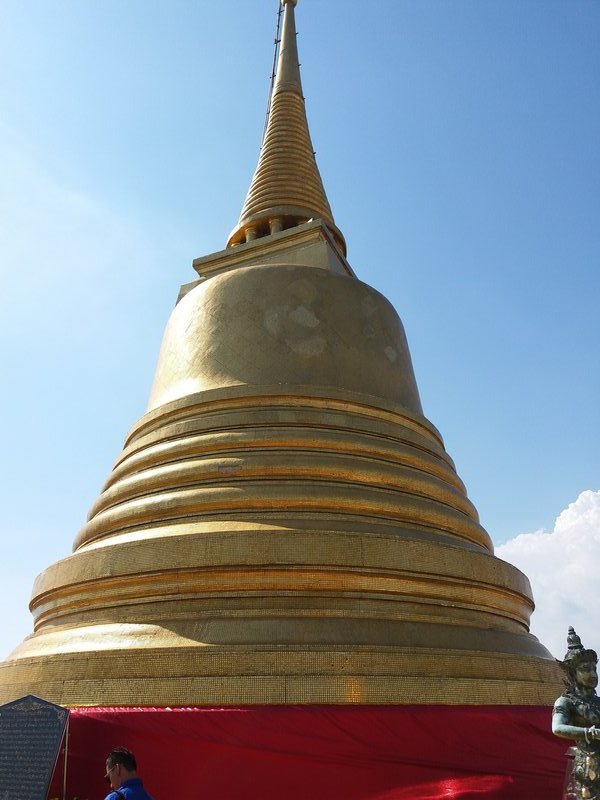 The golden chedi on the top 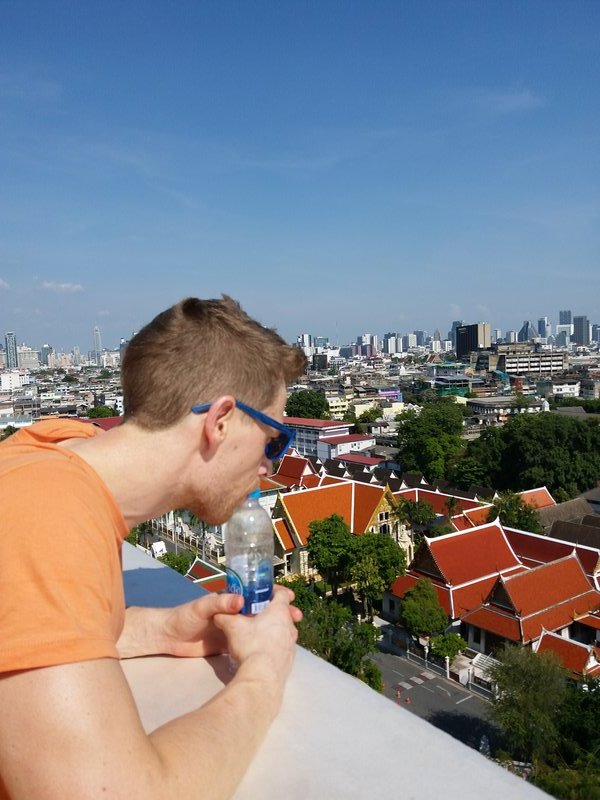 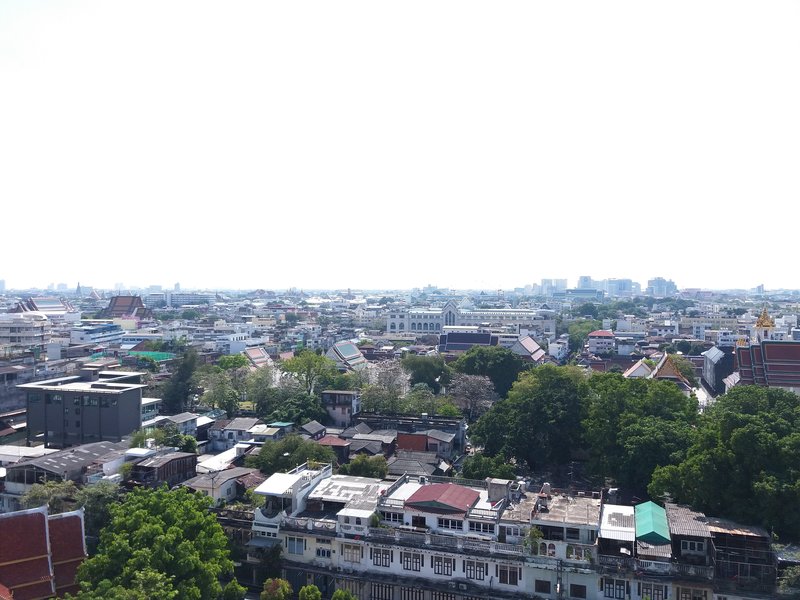 Views of Bangkok from the top

After a cooling-off session with some ice cold water and fruit, we then headed out on the canal boat service that runs through Bangkok. There are waterways everywhere and tourist and commuter boats continually run up and down them. This one was free and we caught it from Phanfa Bridge all the way down to Hua Chang, close to Siam Square. 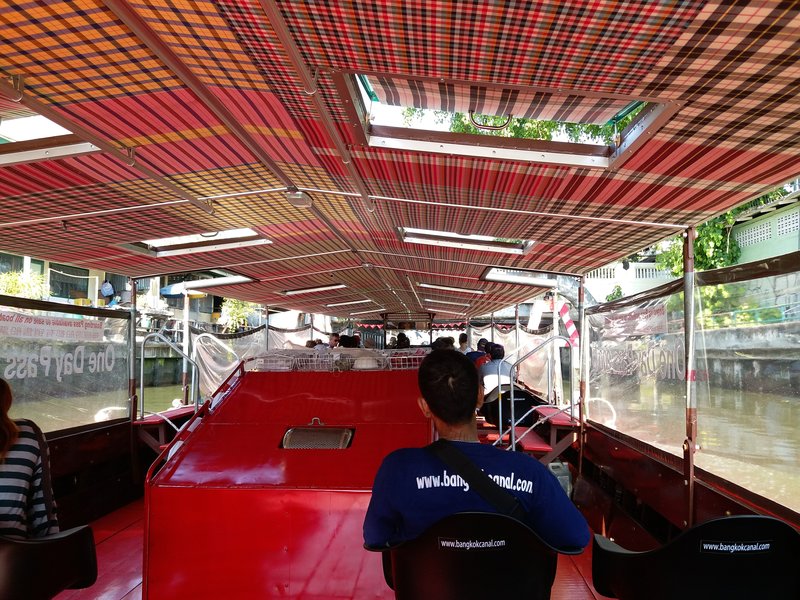 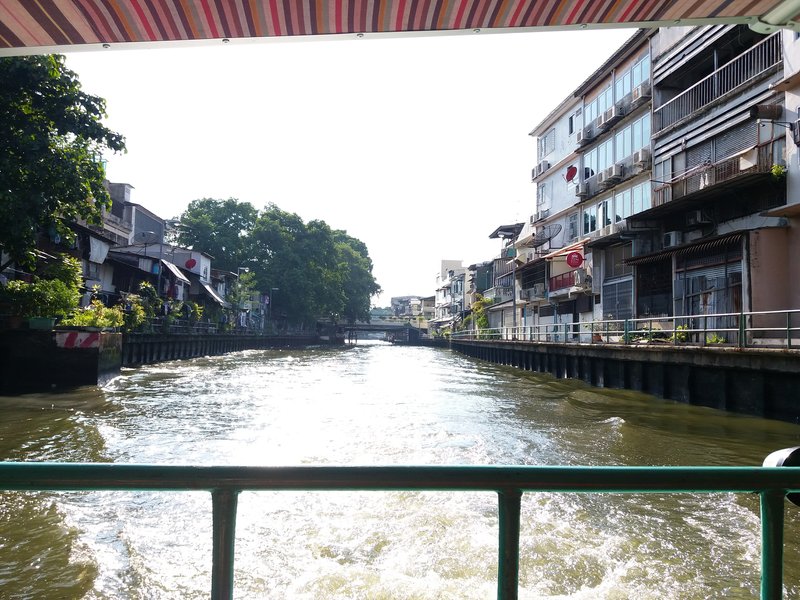 I really love looking into peoples back gardens and houses that you can see from the canal, it’s so interesting!

Hot again (it really was hot today) we headed towards the A/C paradise of some of Bangkok’s best malls, including Siam Discovery and Paragon. We stopped for another vegan meal before Pete started to feel exhausted – it appeared he had pushed himself too hard at the gym in the morning, so we headed back to the hotel for a short nap before heading out in the evening to meet Ben on Phra Athit. 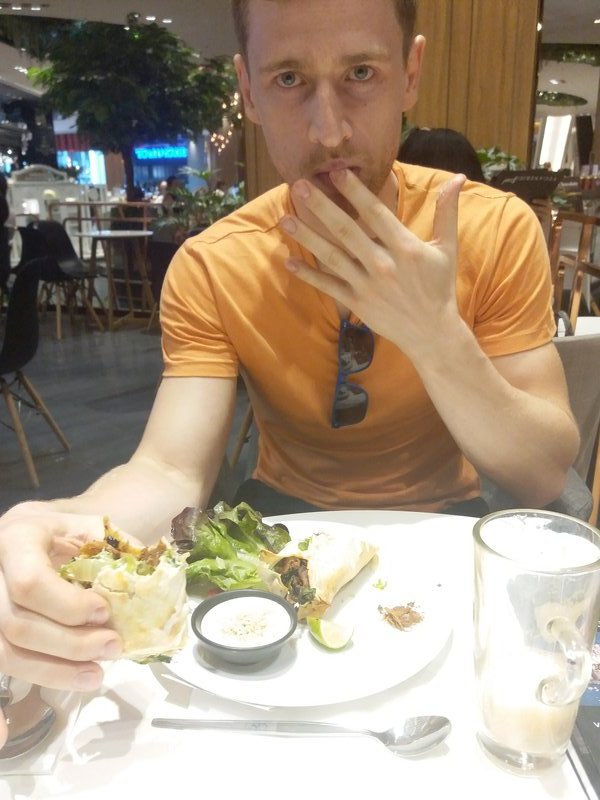 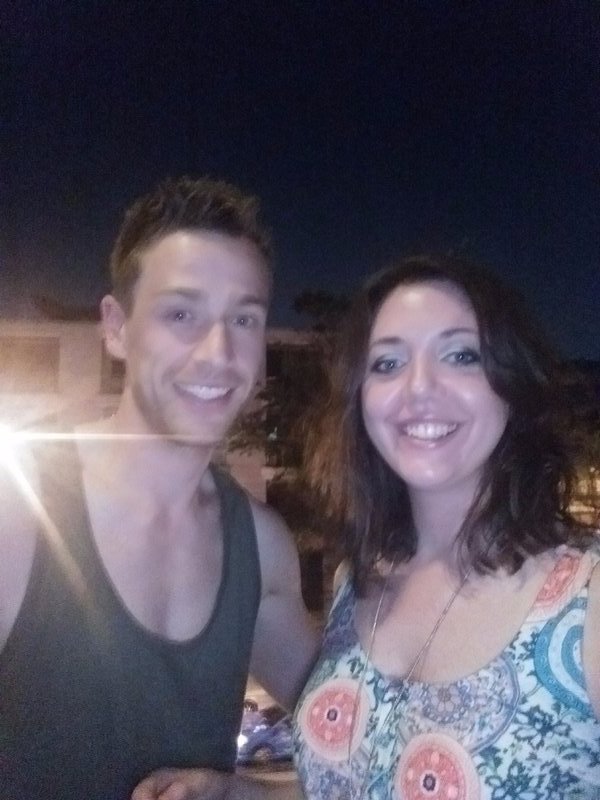 Ready for a night out! 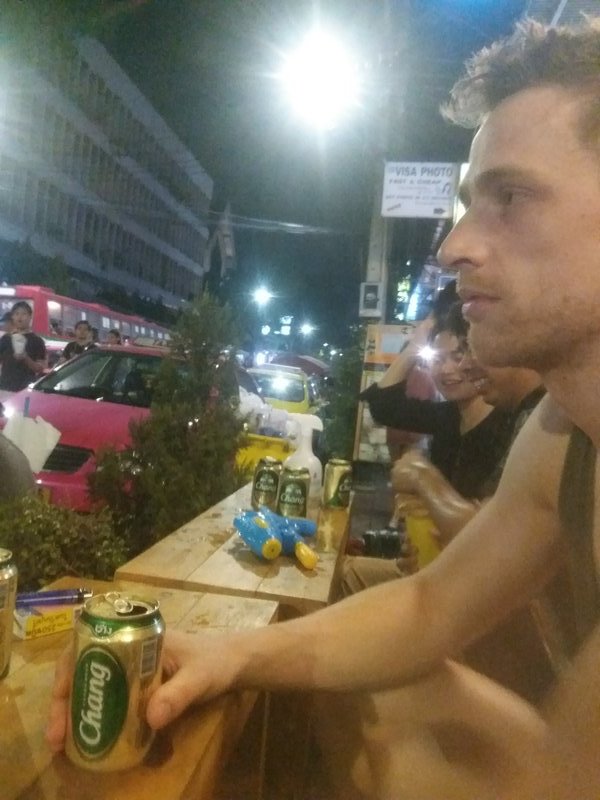 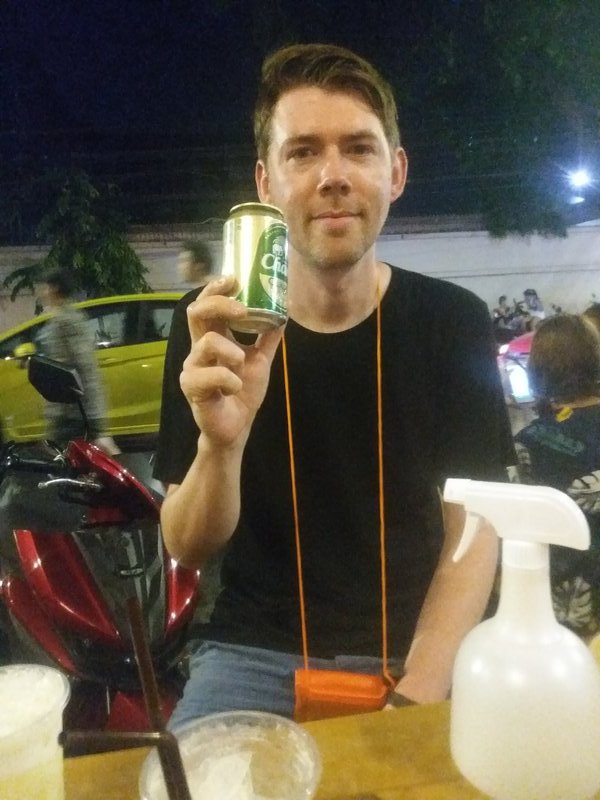 Unfortunately, Pete felt much worse the following day, I think it was a bit of heat exhaustion, probably cause by the Muay Thai… so I played nurse for a bit until he felt well enough to venture outside. We took a taxi over to Phra Athit Boat station on the Chao Phraya river, but not before stopping at a little roti shack which Ben told us about. Roti’s were one of my faves during my last trip and these were delish! 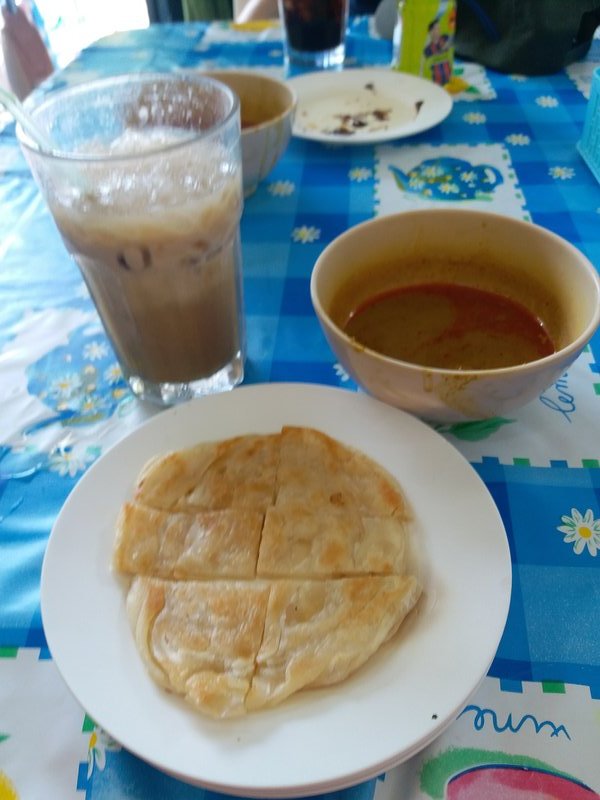 So we grabbed the boat from Phra Athit over to Wat Arun, one of the oldest temples in Bangkok where Buddhism is merged with Hinduism. It is a Buddhist temple really, but the Khmer architecture and scary Hindu style figures stand out as different from other Buddhist temples in the region. It’s really interesting to look at and is simply beautiful. 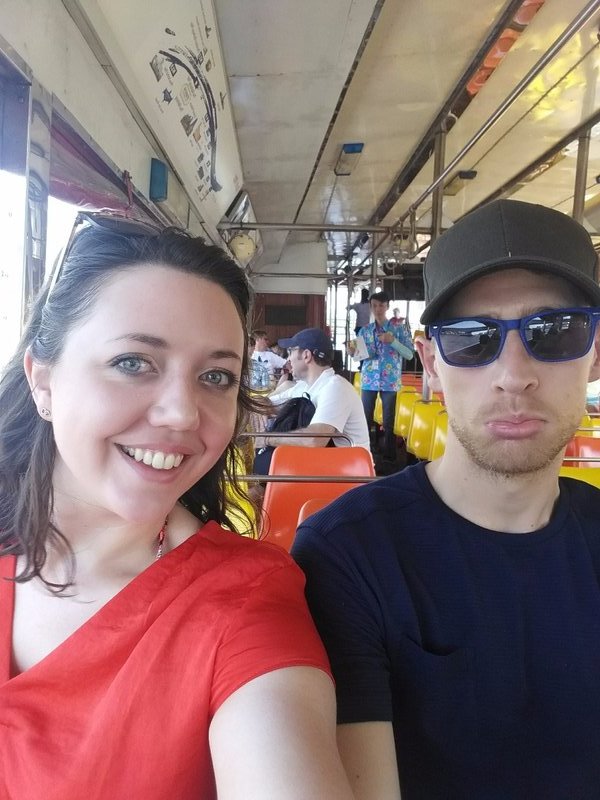 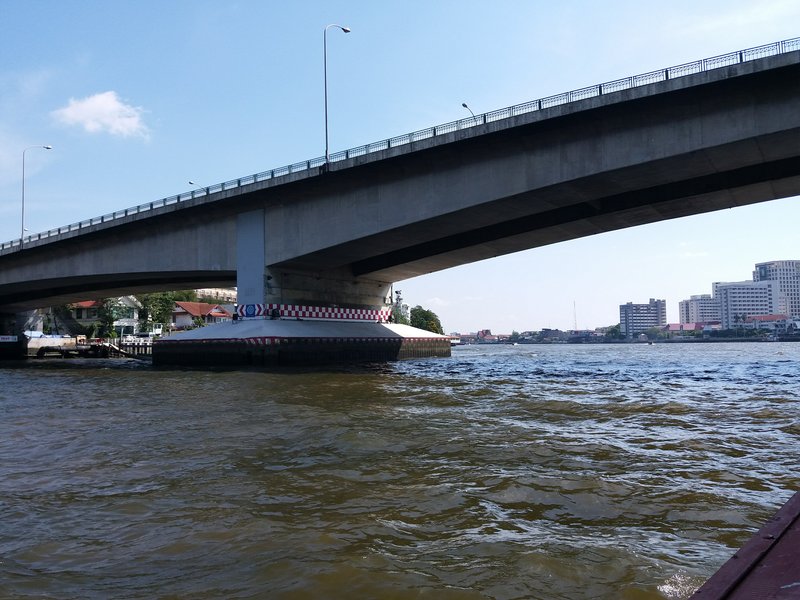 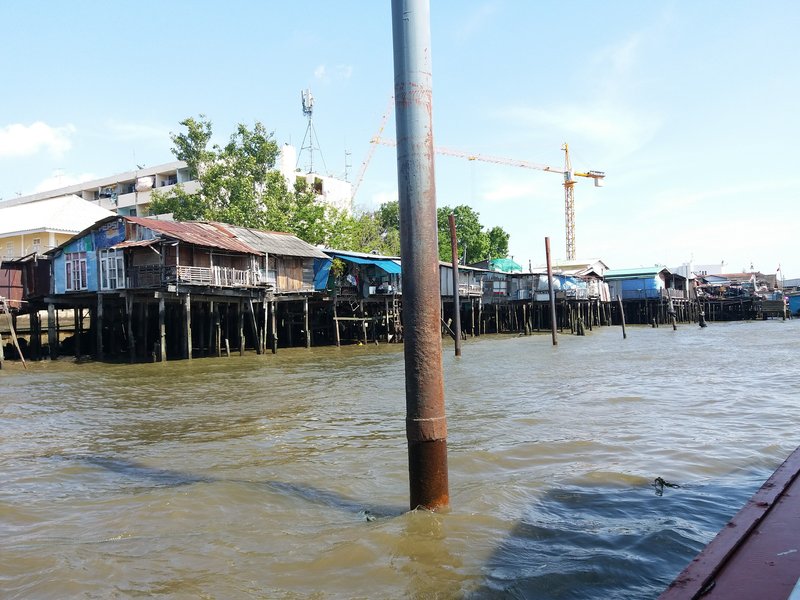 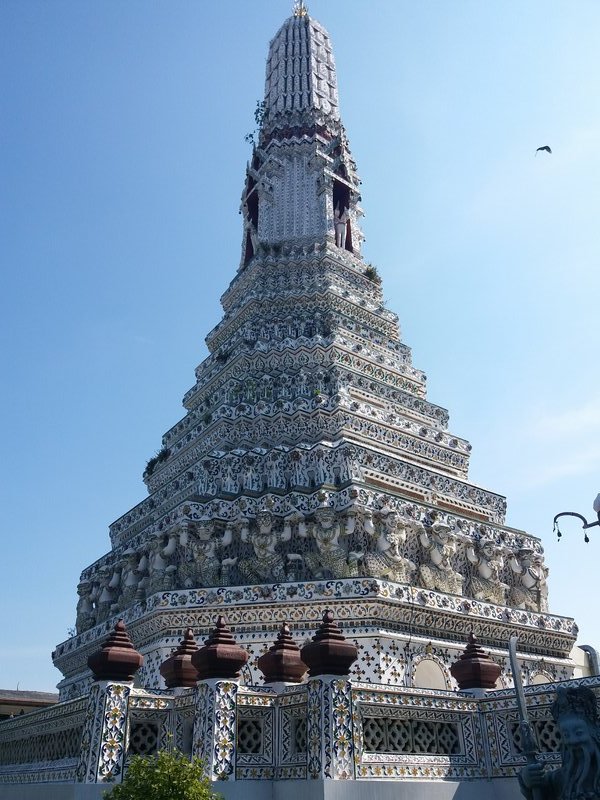 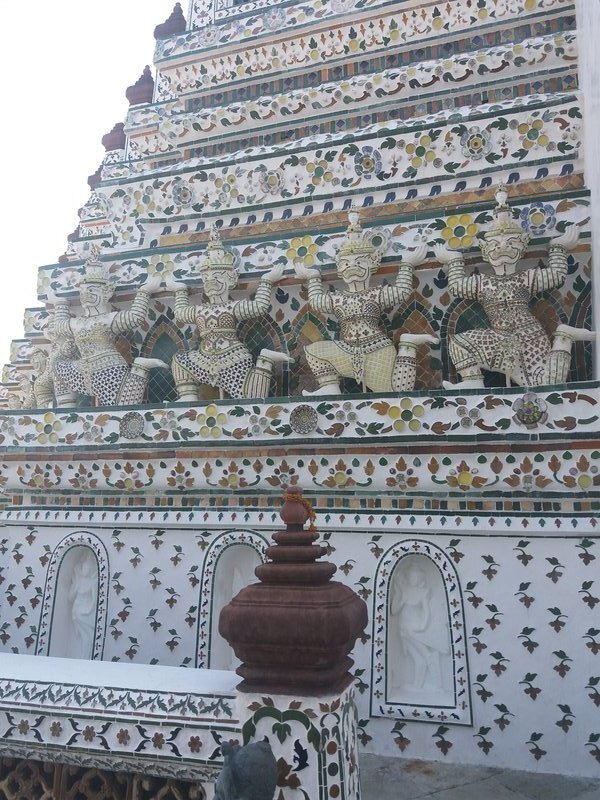 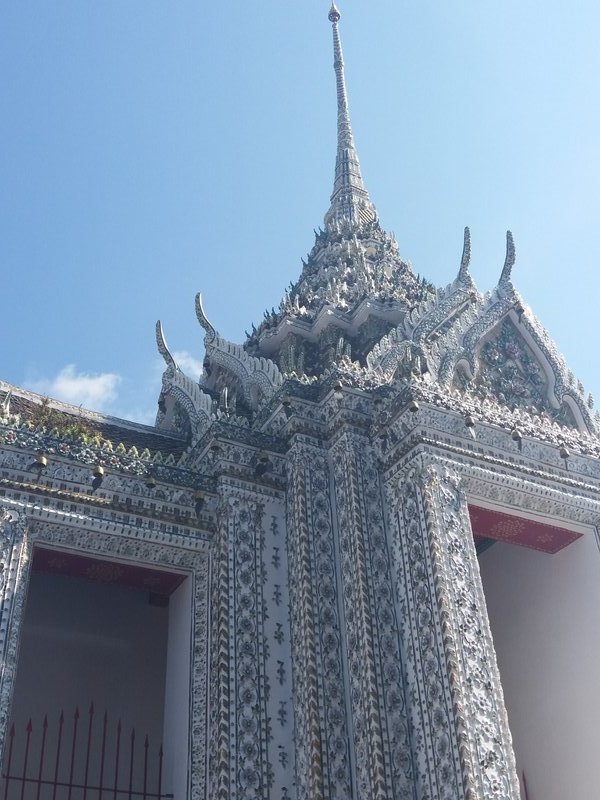 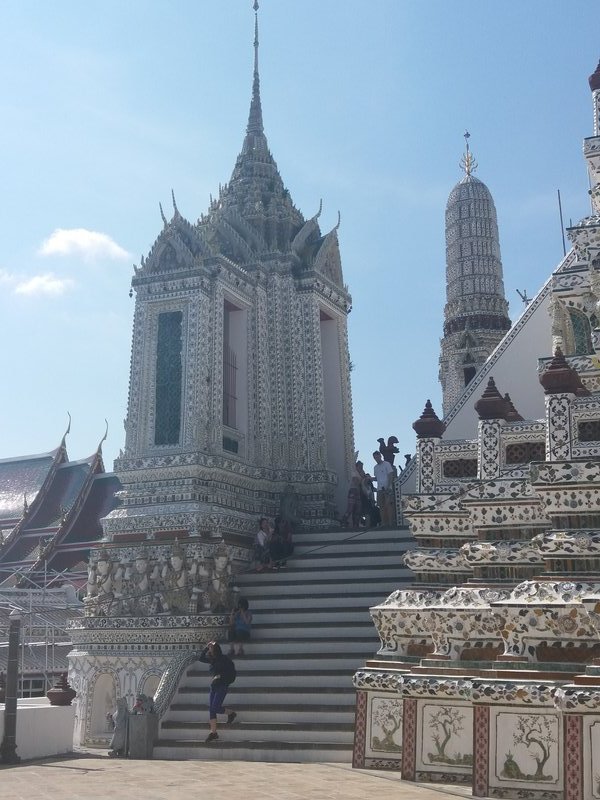 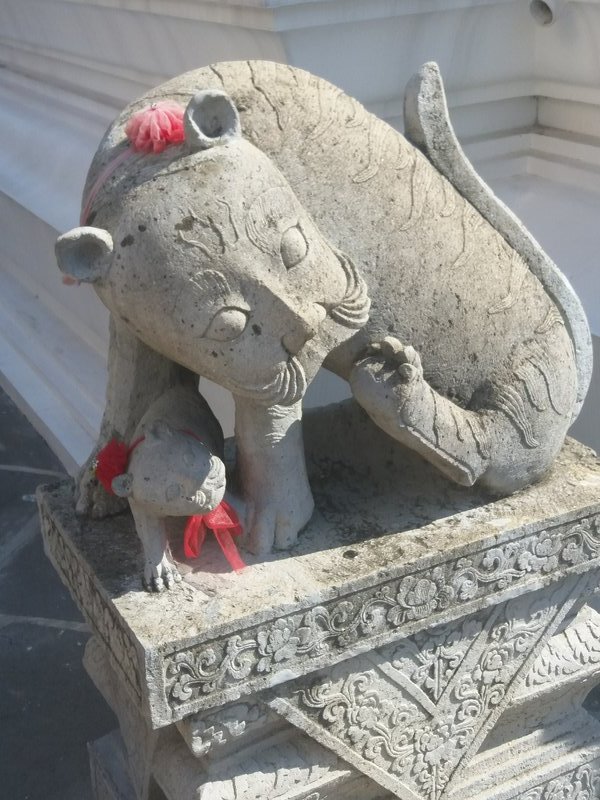 Chinese lion
It really is a mesh of different cultures and religions!

We had then planned to go over to Lumpini Park to chill for a bit, but on the way, Pete started to fade again so we looped back around and headed back to the hotel. Although on the way we stopped at one the BTS stations in the Silom district of Bangkok and witnessed one of the craziest Songkran sites we saw… the street was packed full of people and the noise and atmosphere was immense. Again, it’s hard to explain, and even the video I took doesn’t do it justice, but still… incredible.

Back at the hotel and Pete wanting to recover for the rest of the holiday, we decided to have an early night ready to get up for an early train to Kanchanaburi the next morning.