We decided to begin the journey back to Marrakech on Friday so we could relax more on Saturday and not have to worry about getting to the airport. The drive wasn’t that far, but the roads on the way had been unpredictable so we were playing it safe. We decided to leave straight after the morning camel ride and stop halfway for lunch, before staying overnight at our favourite; Ait Ben Haddou. That was so on Saturday we’d only have a 2-hour drive back to Marrakech. The plan was perfect….

We started the journey and at around 1pm we stopped at a village just outside Agdz for some lunch. At the table, we were both mesmerised by a strange fly. It looked different. It had large eyes that watched you and an open mouth that made it seem to be smiling. Pete ‘played’ with it for a while, moving his pointed finger in front of it and watching it hover in sync with the movements. It was very strange. Pete even filmed it(!)

Our food came so our attention turned to the table. But at that moment the fly swooped down to Pete’s eye level and hovered in front of his face before ‘spitting’ something into his left eye…

Pete was shocked and not sure of what had just happened. He went to the toilet to look in the mirror. Both of us had a look in his eye and couldn’t see a thing. We thought we must be exaggerating what had happened. We waited for a few minutes to see if the sensation in his eye would go, but it only got worse until Pete described the feeling as “wriggling”. That got me worried and so I googled ‘fly squirts something in eye morocco’… I did not like what I saw and got quite panicky.

Quickly, the strange sensation turned to pain and Pete was soon in agony with the pain of wriggling in his eye.

We checked the maps for hospitals, the closest one was back in Zagora or onward to Ouarzazate, so we decided to continue on with me now driving. Hoping to stop at a pharmacy in Agdz on the way.

We stopped at the first pharmacy we saw and told the people and the resident doctor what had happened. They told us to calm down and that everything was fine. The pharmacist gave Pete some eye drops for conjunctivitis and said it would be fine in a few minutes to an hour. We relaxed slightly, maybe it wasn’t so bad. Pete used the drops immediately but felt no relief so about 5 mins down the road on the way out of Agdz we stopped at a second pharmacy. This place was worse and even laughed at us saying that we were being mad. The wriggling feeling Pete could feel lead us to believe that perhaps fly larvae had been deposited into his eye, but the pharmacist said this was not the case and that the drops we had already been given would do the trick.

Reluctantly we drove onward, convinced it was something more serious, and also driven by the pain that Pete was in, we decided to continue on to Ouarzazate hospital…

2 painful and stressful hours later we arrived in Ouarzazate and went to a pharmacy to ask for directions to A&E. The lady at this pharmacy understood us more clearly and told us the situation was very serious and that Pete did, in fact, have fly larvae in his eye…. She gave us directions to the polyclinic which had an ophthalmologist specialist for emergencies. We went straight there. It took us a while to find, but eventually, we were with the doctor and calmer.

The doctors but some special drops and cream into Pete’s eye and had a look with a camera. The camera was attached to a tv screen on the wall which I could see but Pete couldn’t… I’m glad he couldn’t…

When the doctor focused on Pete’s eye, you could clearly see about 15 white wiggly larvae with black heads. Pete told me to video the screen, but I honestly was nearly throwing up, it was disgusting. I managed to get one photo of a single worm: 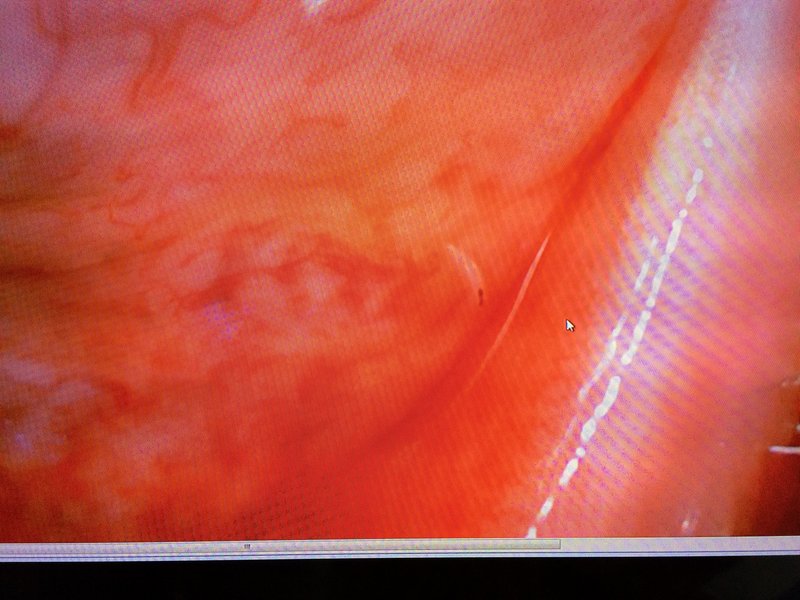 The nurse told us that this was a common problem in Morocco, it is this fly, known as Oestrus Ovis or more commonly a bot fly: 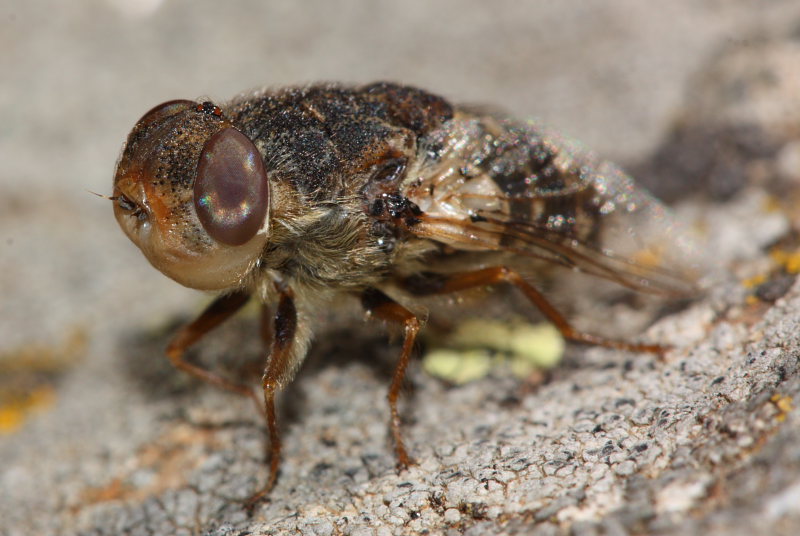 The bot fly is trying to deposit its larvae into sheep or camel nostrils where they develop fully in the mucus, however, during Autumn months they can often mistake human eyes as hosts. It’s not serious and usually only leads to conjunctivitis, but there are reports of people losing their eyes, so we are glad we were able to get this dealt with as soon as we were able.

The doctor got as many of the fly larvae out of Pete’s eye as he could, but the procedure was painful. He basically just used cotton buds to scrape them out… Pete was left with 3 or 4 in his eye and given steroid drops and cream which he was to apply for the next 2 weeks. The doctor said the drops would paralyse the larvae within 2 days and they would fall out of his eye.

All-in-all it was a pretty horrific experience even for me, so I can only imagine what Pete was feeling. He dealt with it very well and we tried to enjoy the rest of our holiday as best we could. We stayed that night in Ait Ben Haddou again, using the experience of our first visit, we decided to stay at Chez Brahim, one of the houses with a view of the old kasbah and we were not disappointed, it was my favourite place we stayed, simply because of the view. 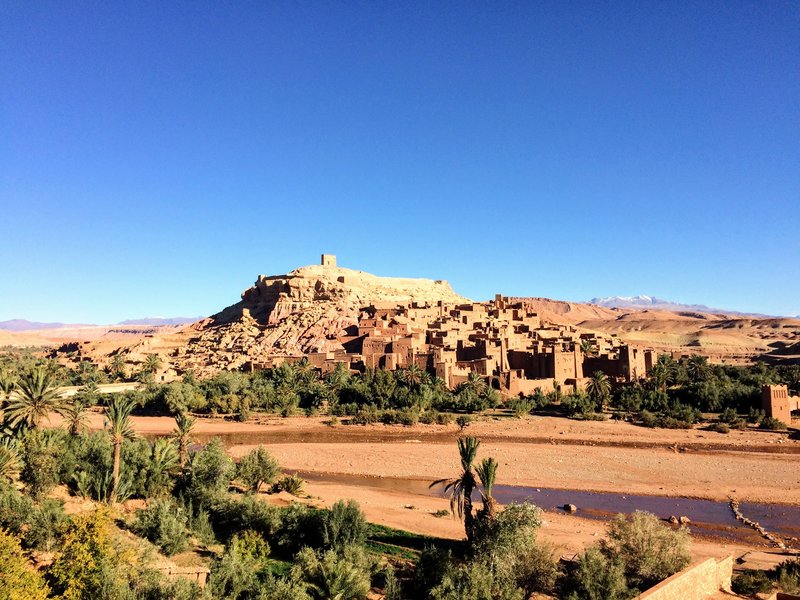 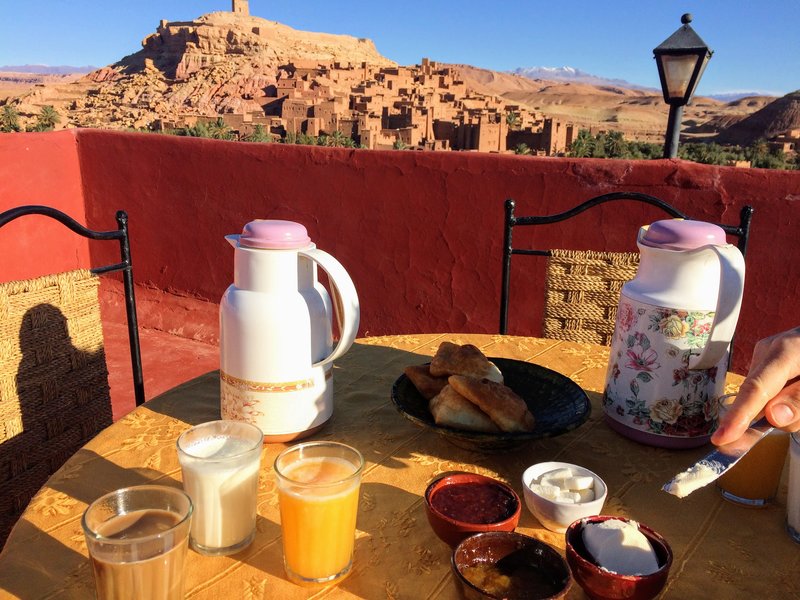 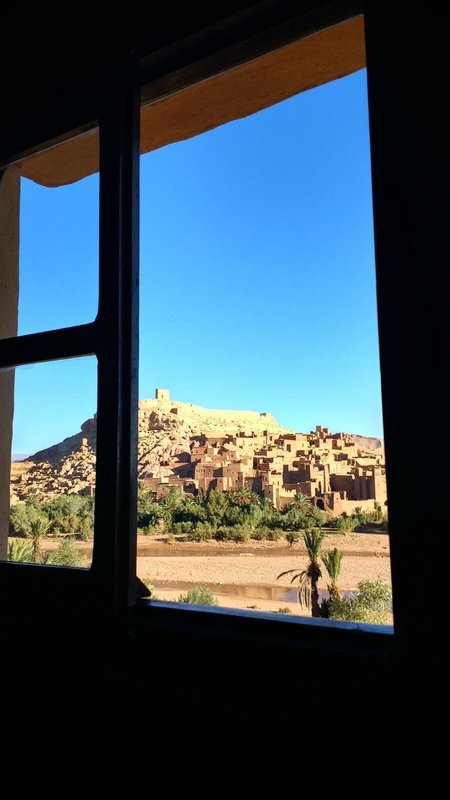 The next morning we drove back over the Atlas mountains, stopping briefly for lunch half way at Café Assanfou, before continuing to the airport in time for our flight home. This time we drove along the N9 Tizi N’Tichka in the sun and as we predicted, it was our new favourite road in Southern Morocco! It’s just a shame we couldn’t enjoy it more. Pete was in a lot of pain, so we didn’t stop often and just tried to get home as soon as we could. 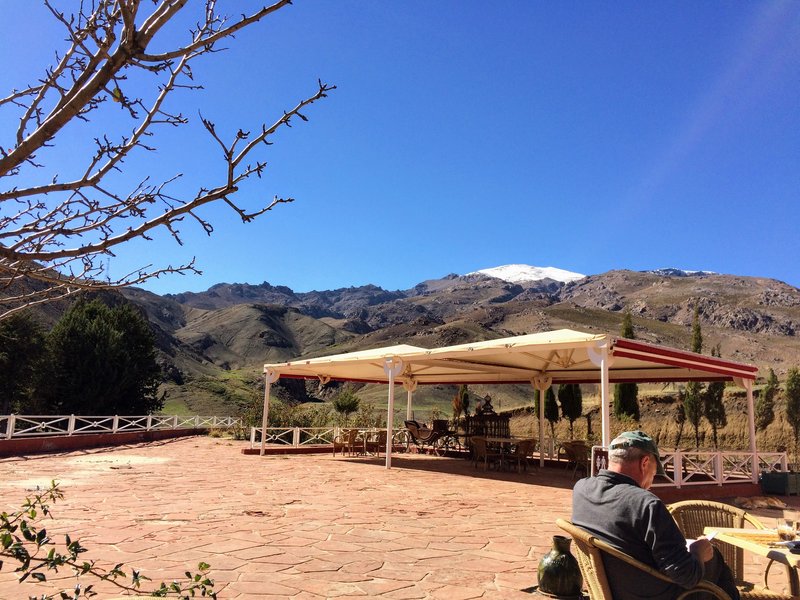 We really enjoyed our Moroccan adventure (apart from the fly larvae bit). The landscapes and scenery of Morocco are inspiring, I had no idea it would be so beautiful. We had a few stresses with the cultural differences, the haggling and hassle we received were at times overwhelming, but we tried to be open-minded and gave people chances when we could. If we were to come back, I think we would have headed directly to the desert, camped out there and done activities and stargazing. In hindsight, we tried to pack too much into the short week and ended up spending most days driving.