From Zagora it was a long drive to the desert. M’hamid is often called ‘the gateway to the desert’, where people go to experience sand dunes and stars. The road was surprisingly good for most of the way, with only part of the way being a single-track road. 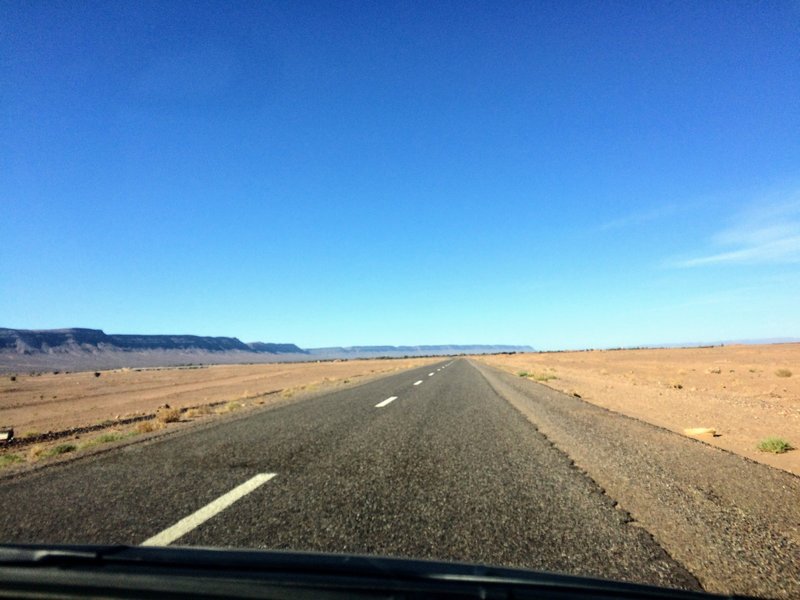 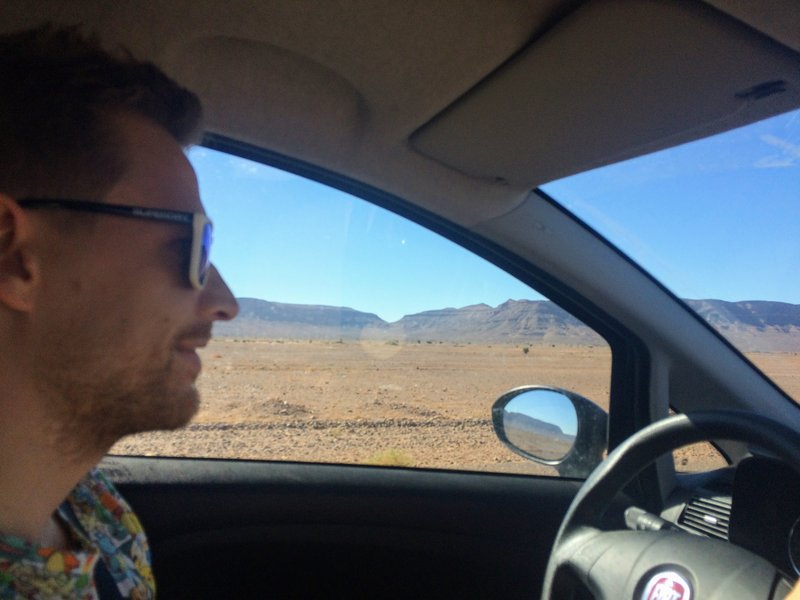 Once again, the views were incredible. The desert crept up on you with small sand dunes appearing sparsely at the start of the journey, eventually turning into large dunes and finally sand for as far as you could see.

We had hoped to go quad biking on the dunes near M’Hamid, so headed out to a small hostel which had great reviews for quad tours. When we got there we stopped at a small shop for directions (and some local clothing). The shop owner Mohammed helped us find the hostel but when we got there, there was nobody around apart from the groundsman of the hotel. He told us the hostel owners were already out on a tour and so suggested an alternative quad tour. The helper from the shop, however, seemed to feel like he had to stay with us and despite us asking him not to, followed us to the quad-biking place… 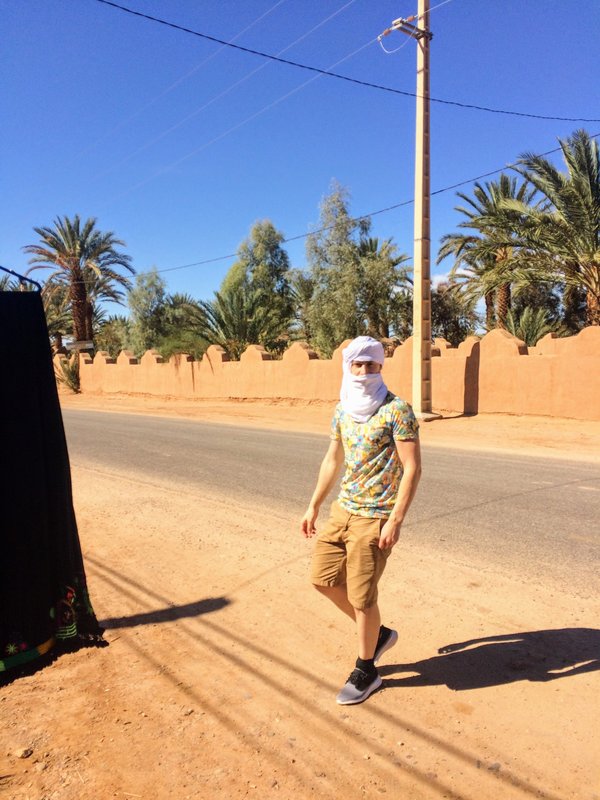 Pete trying to blend in

It took us nearly half an hour to negotiate a price for the quad-biking, as we were told in Zagora to pay no more than $25-30 each… we ended up paying $35 after getting them down from $50. The negotiating experience was quite stressful, especially since it takes so long. The locals want to drink tea and do it slowly, enjoy it. We just wanted to go quad-biking and not waste time worrying about money! 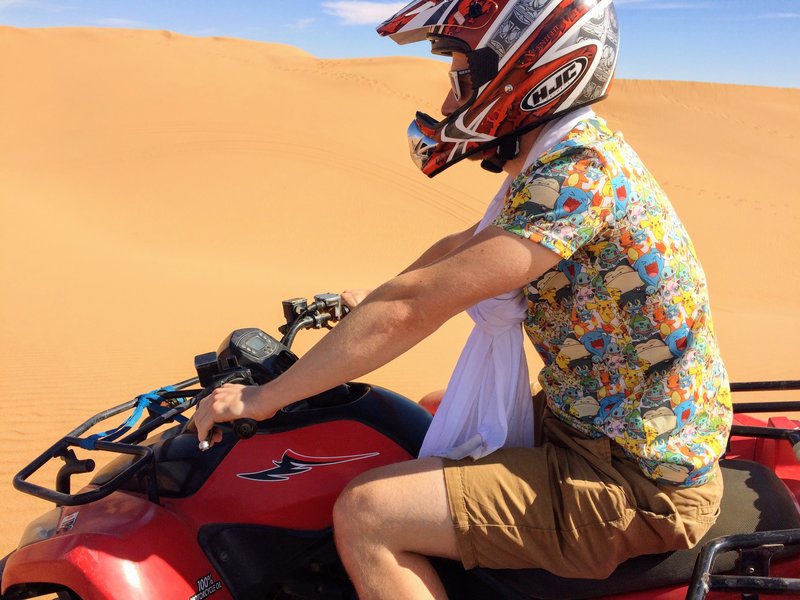 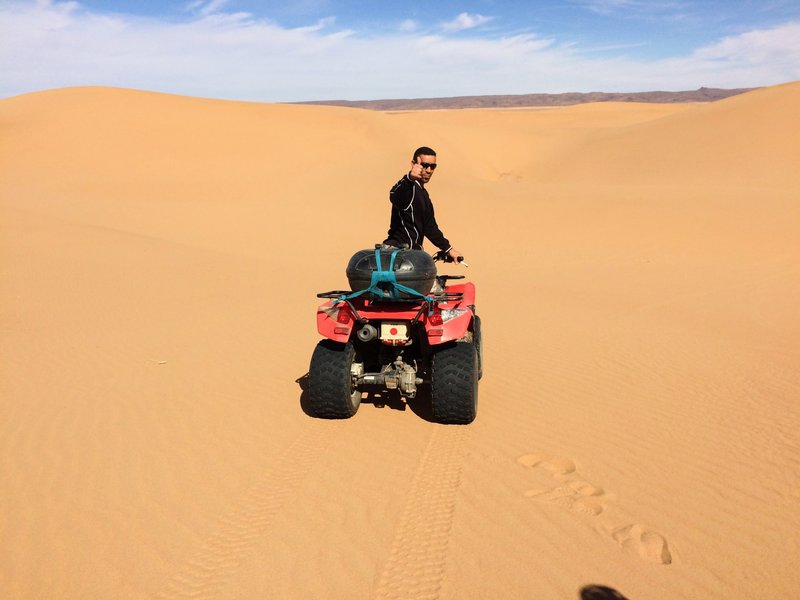 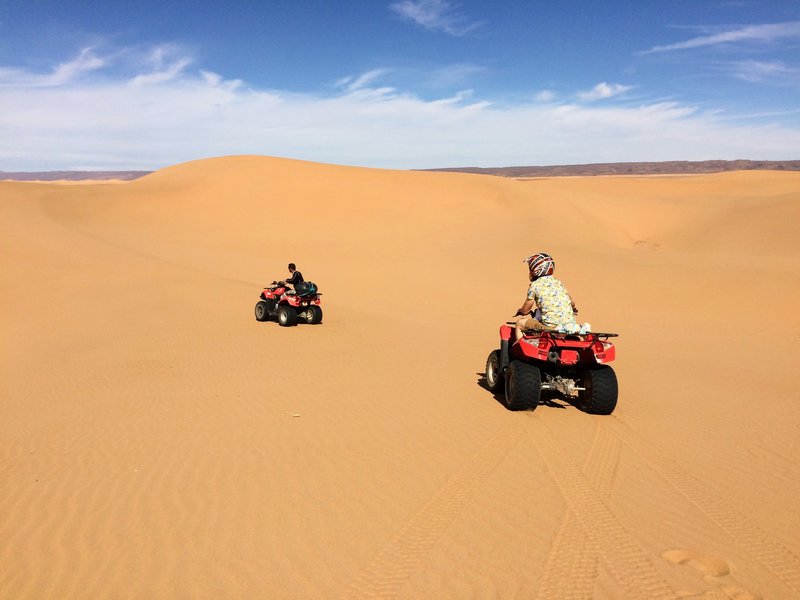 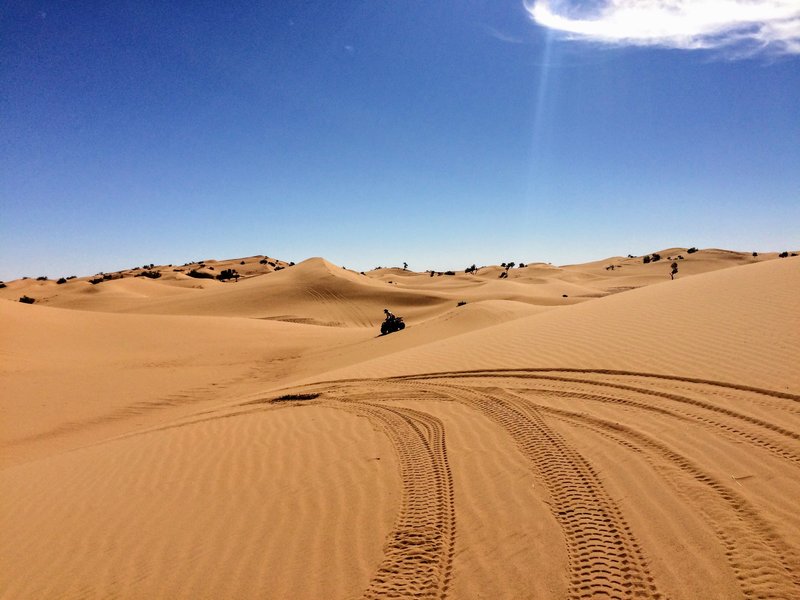 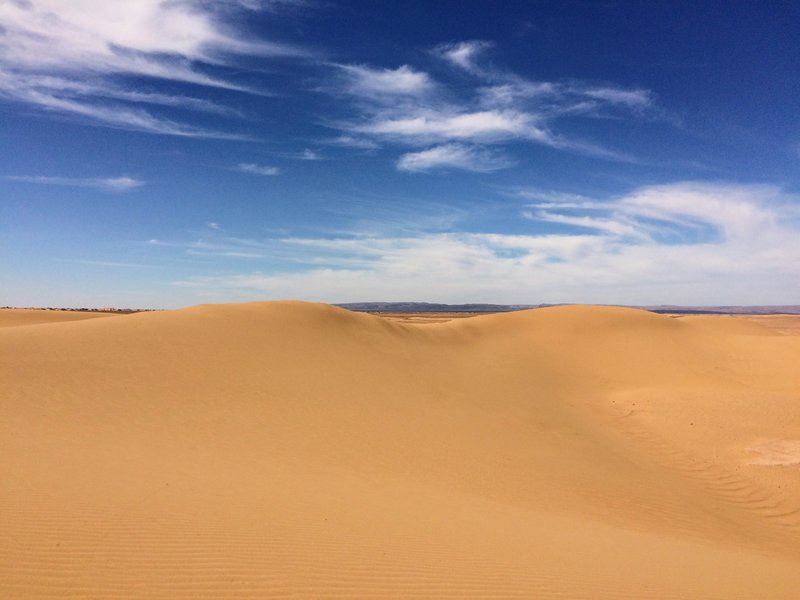 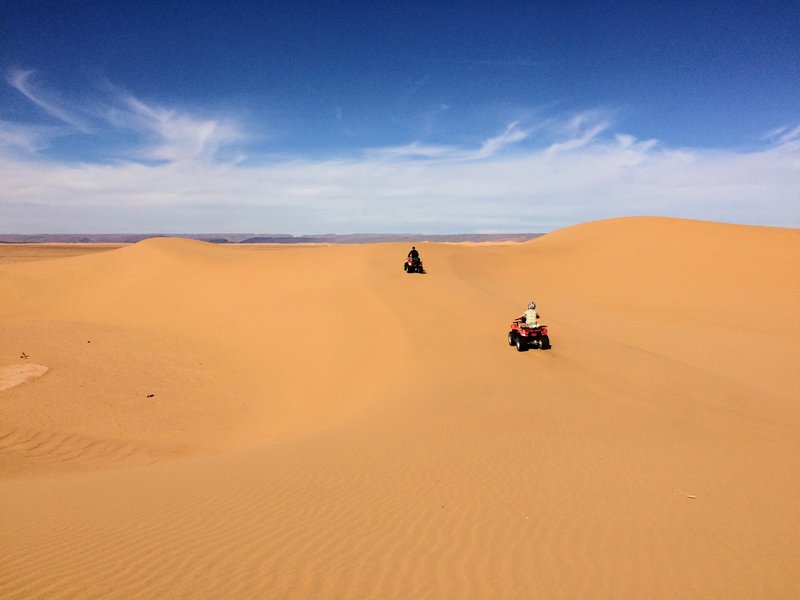 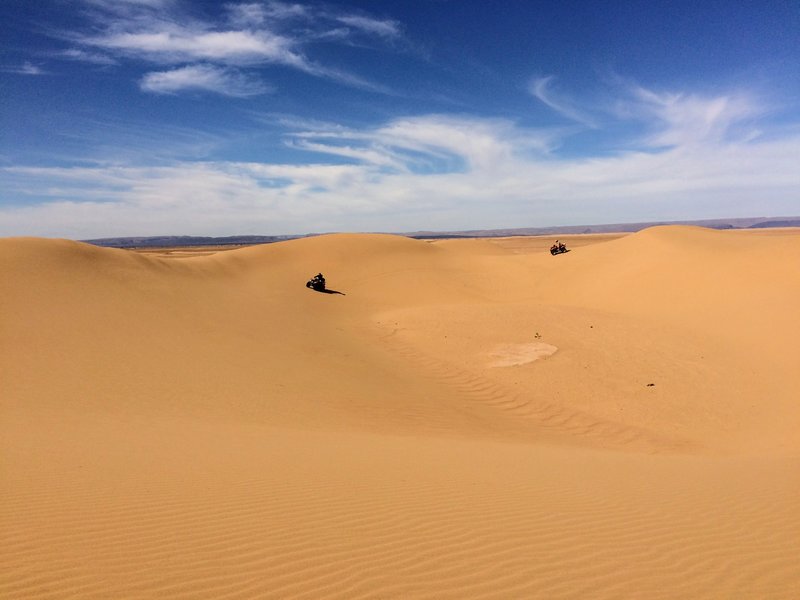 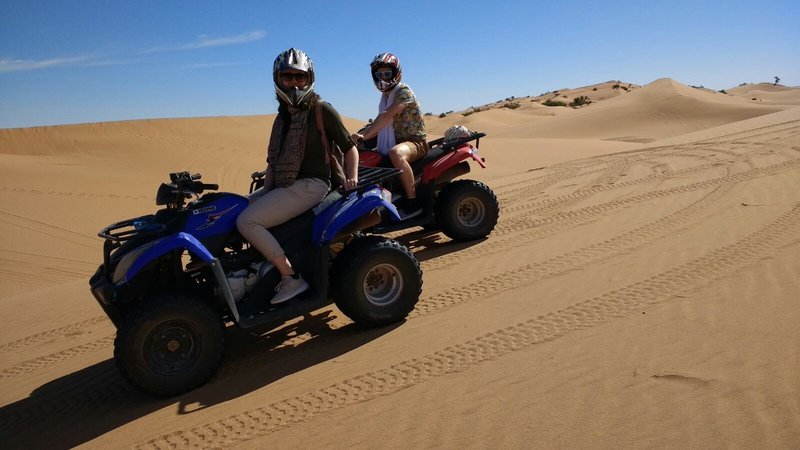 Quad biking was AMAZING though, we absolutely loved it, especially Pete! The sand dunes were much bigger than we had expected, we felt in the middle of nowhere at times as there were some points where all we could see 360 degrees around us was desert!

When we returned to the quad organisers, they caught wind on us wanting to camp in the desert and we ended up negotiating with them again for roughly an hour on the price of a night on the large dunes Erg Chegaga. The price they wanted we felt was unreasonable and more than what we were offered in Zagora! After another long and stressful negotiation, the decision was that we would drive ourselves to a smaller, more local dune and stay at a campsite there. By doing this we would save the cost of the 4×4 to take us. The guys assured us that the road was good and that our car would make it. The deal was that our ‘helper’ from the shop would also continue with us as our ‘guide’… despite again us asking him to leave. This kind of situation made us very uncomfortable. It wasn’t the first time a local had put a lot of time and effort into ‘helping’ us – this guy had his own shop to run, and instead wanted to be a guide for us overnight?! We were never sure what the reason for the help was. We wanted to believe that the ‘help’ was genuine, but we couldn’t help but feel that often there was an ulterior motive… I’m certain that we were paying for this help in higher prices. But we were conscious about not being prejudice after all the Moroccan culture is different, we wanted to accept and embrace that, but we just couldn’t shake the feeling that we were being exploited at times….

We decided to take a leap of faith and drove with our guide out towards the campsite. The road started well, fully tarmacked, but then our guide asked us to turn off road… We were not sure of this but were promised by our guide that it was just this first bit and the road would return. We drove off-road for about 40 minutes. We didn’t go particularly far, it was just slow going and difficult terrain. Eventually, we got stuck. It seemed inevitable, despite the positivity of our guide. Mohammed promised us the road would get better, but with the sun beginning to set we decided it was just too dangerous and turned around after we freed the car.

At this point, our guide told us there was a different “better” road, which was fully tarmacked the whole way but by this point, our trust was lost, we couldn’t understand why he didn’t take us that way first!! They asked us to pay for the tent and food since they had already set it up for us. We refused and after a strong and stressful negotiation, we were finally free of our guide and back on the road by ourselves feeling both guilty (for wasting Mohammed’s time) and disappointed (at not camping under the stars). 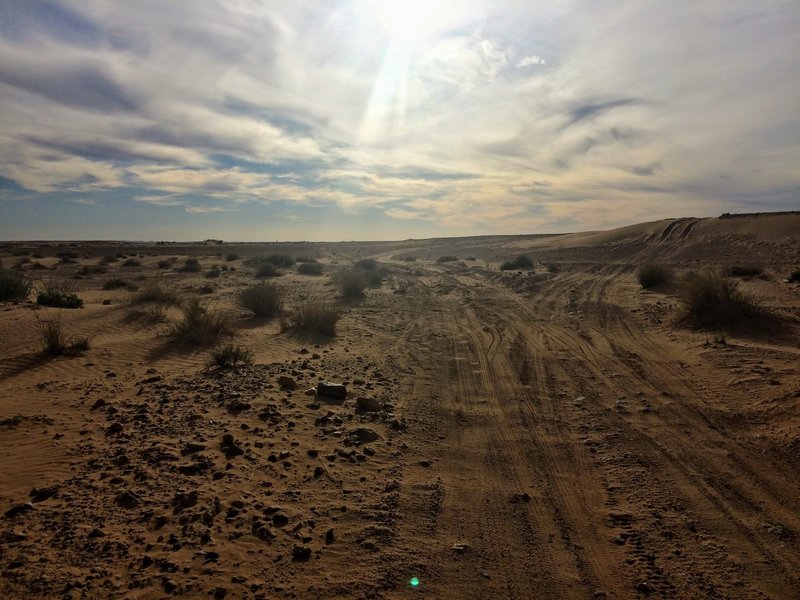 The stressful situation left us exhausted, so I decided to treat us to a special hotel for a night and so we stayed in one of the African bungalows at Chez La Pacha. The hotel was stunning, we loved our room and the gardens and the pool were peaceful. We had a few drinks to unwind. 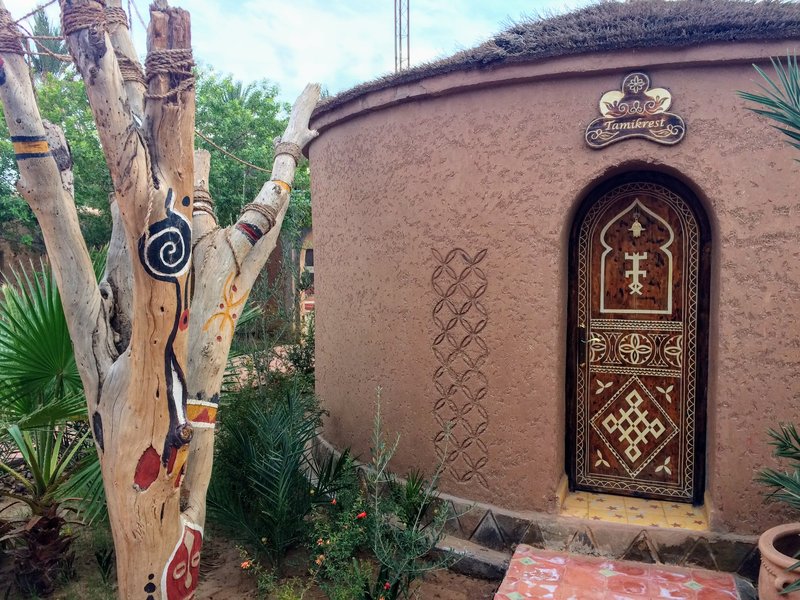 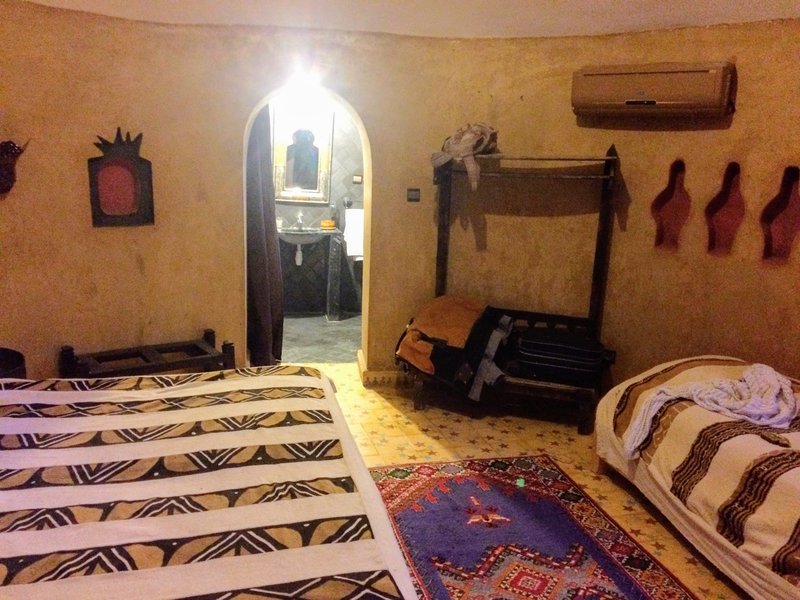 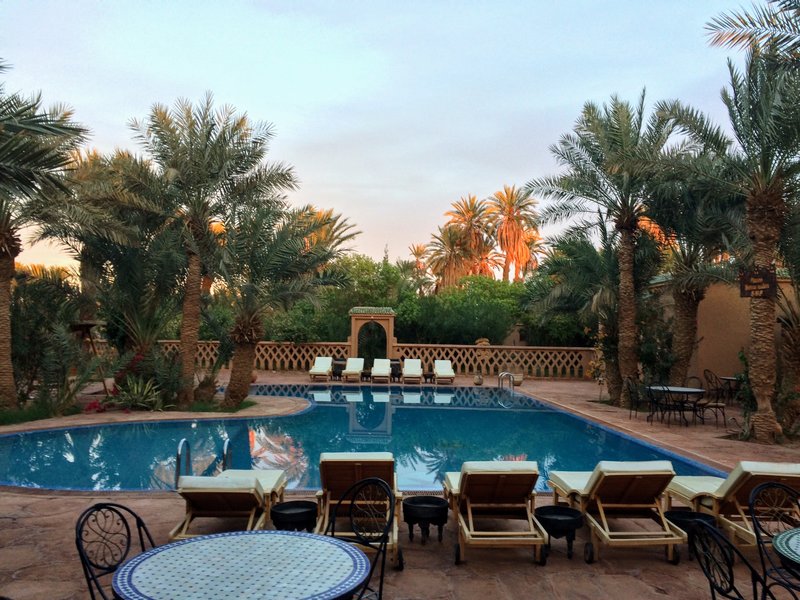 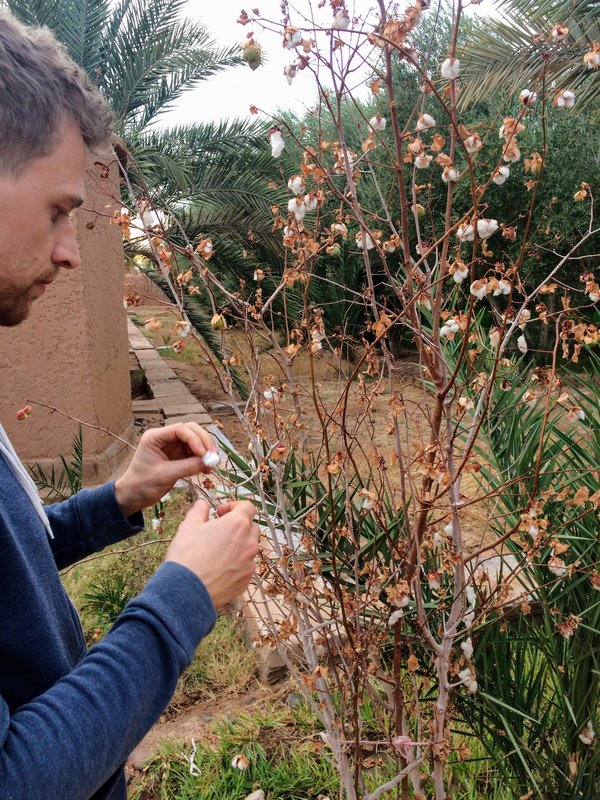 The following day we decided to chill some more. I wanted to go for a camel ride, however, Pete’s not a big fan of Camels, so we settled on me riding a camel and Pete to walk next to me! The ride/walk was very relaxing and tranquil and once again we were amazed by the dunes. The camel gave me a great vantage point to look out over the landscape, and the slow pace of the camel compared to the quads made the desert feel completely different. 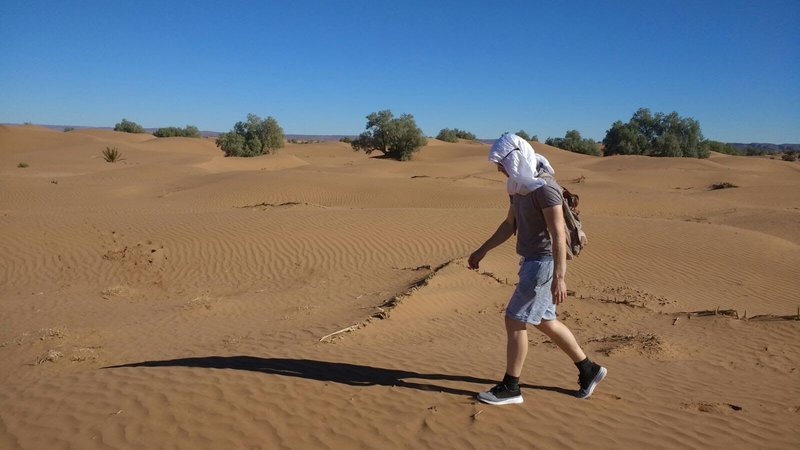 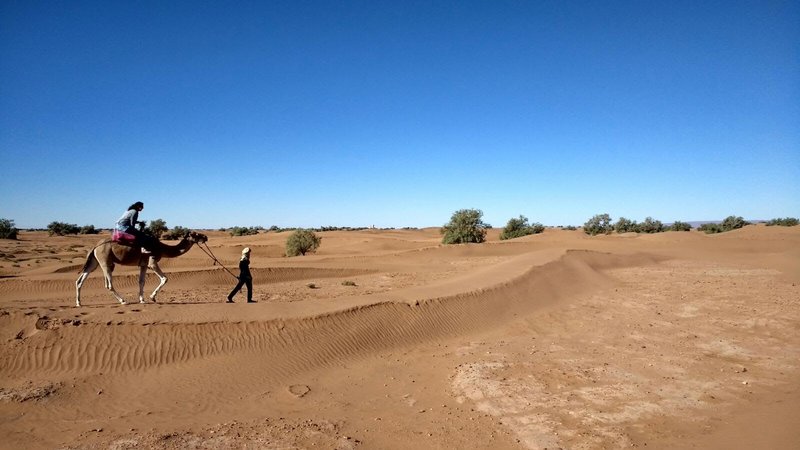 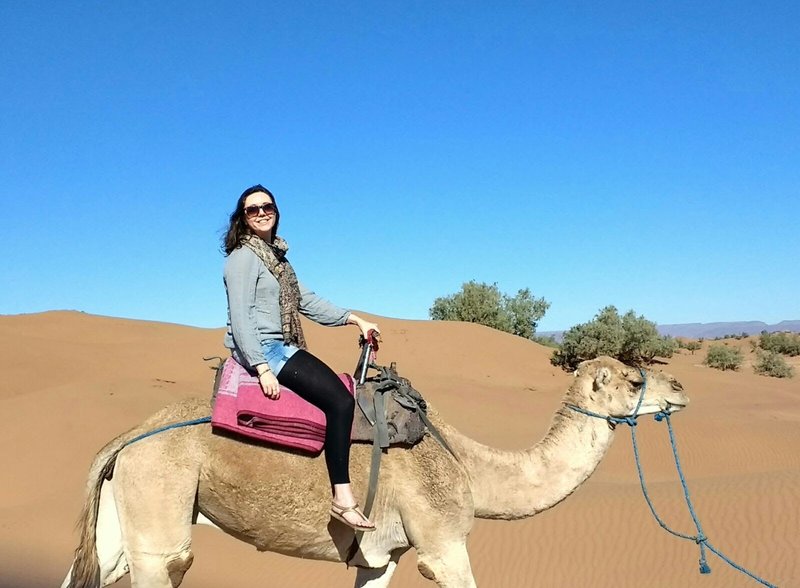 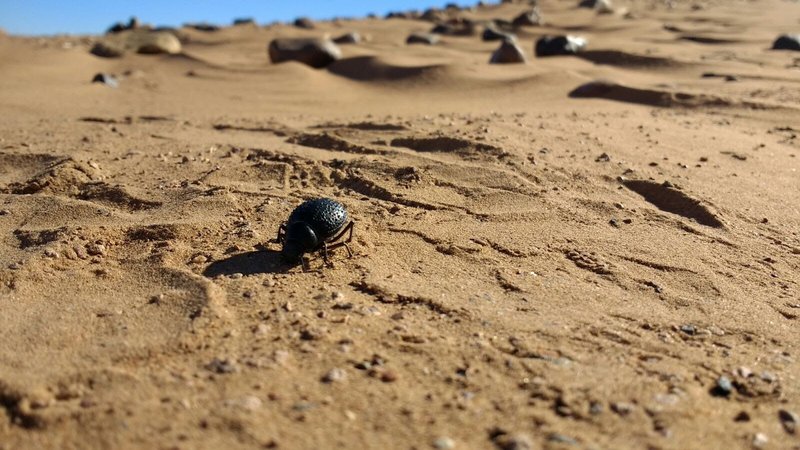 We loved the activities you could do in the desert, the quad biking was so fun! We wished we had gotten to stay in the desert as one thing we had hoped to do was stargazing – Apparently it’s so dark you can see stars on the horizon as there’s no light pollution. But, we did the best that we could in the time that we had. Everything adds to the experience and adventure 😀