Well… at least we tried to leave Marrakech… we had downloaded satnavs for our phones, but even they found navigating through the Medina difficult as they didn’t seem to understand the concept of one-way streets. We seem trapped inside the walls of the city and so just drove as close to the wall as possible on a parallel road until we found the nearest exit!

Unfortunately, outside of the city the driving didn’t seem to improve as Moroccan’s seem to have zero patience on the roads and certainly don’t stick to the highway code as Pete and I do. Not as we experienced it anyway. We got cut up, tailgated, flashed at, pulled out on, beeped at, shouted at and flagged down by what seemed like every other car on the road! It was daunting at first, but Pete soon got used to it and I learned to divert my attention to the scenery and looking out the window!

It had rained in Marrakech the whole night before and was still raining in the morning when we set off. We figured that Morocco isn’t that used to the rain because all the roads had flooded…. quite badly. Had the roads not been busy so we were able to follow someone to know how deep the water was, we may have turned around and waited for the waters to recede. 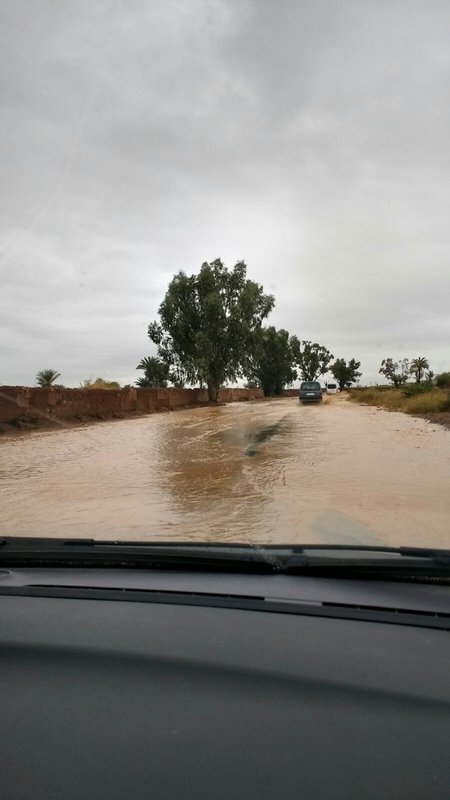 The journey from here didn’t get much better as the ascent up and over the Atlas Mountains began and we went deeper and deeper into the fog and rain clouds. This road: the N9 aka Tizi N’Tichka was supposed to one of the most beautiful roads in the world, but unfortunately we couldn’t see a thing… 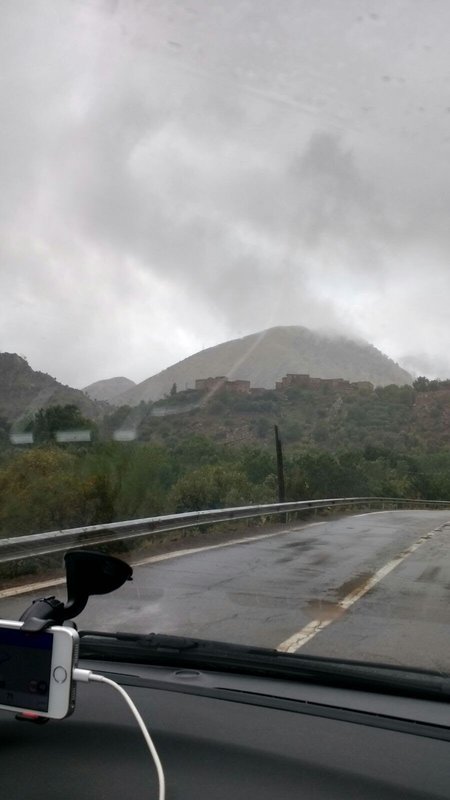 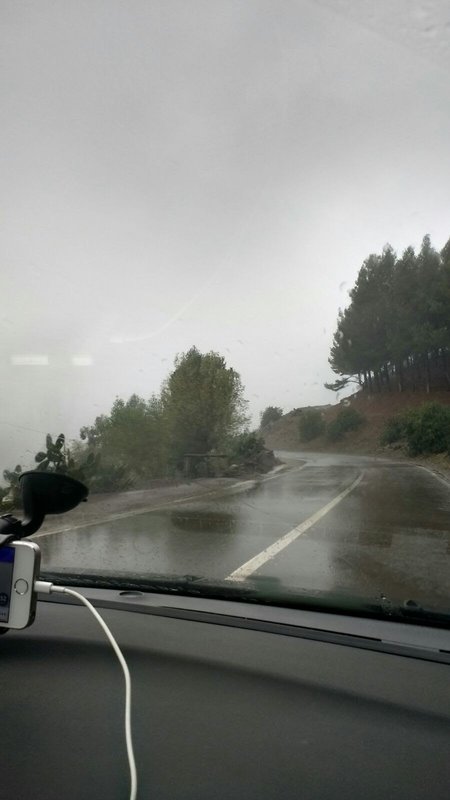 But still, I’d much rather have been in our car than on a tour bus… 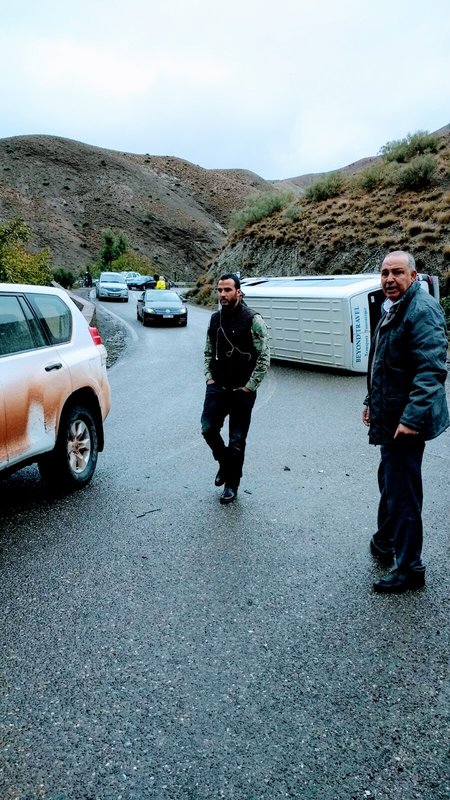 Quite a scary sight, the passengers looked shaken up but luckily uninjured 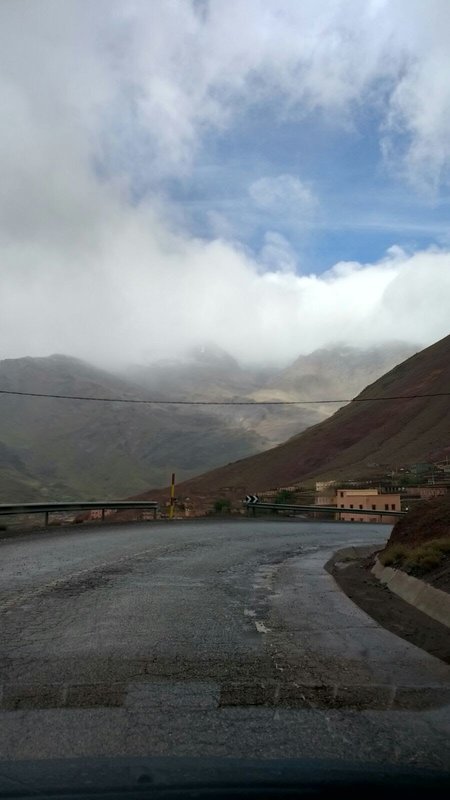 …I think this was when we decided that we should make sure our plans included a return trip back over this mountain pass on a more sunny day.

We arrived at our guesthouse which was still high in the mountains but at least to the south of them. Riad Irocha was a small guesthouse in Tisseldei, a very sleepy village with only a handful of houses. It was lovely and the owner, Ahmed, was very hospitable. 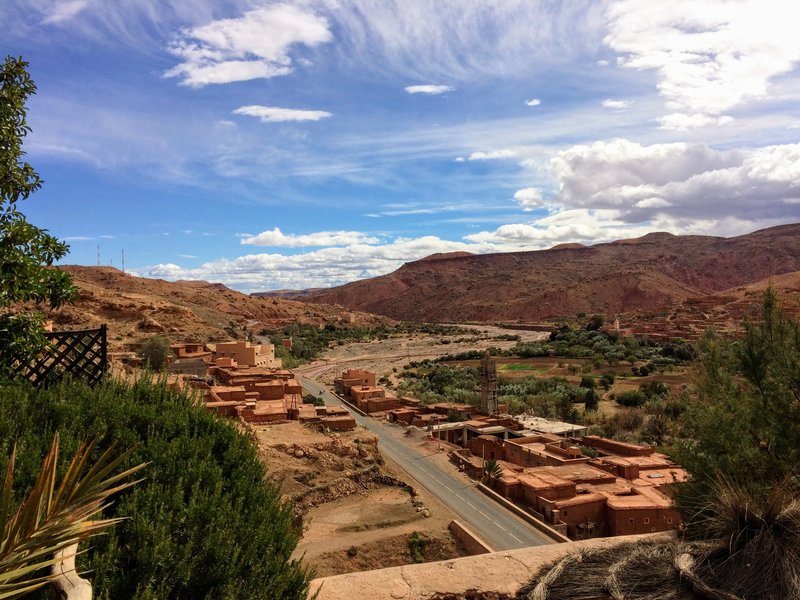 We ate some tasty food here and then took a short walk out of the riad down into the village and then to the palmerai (oasis) which was about 5 min walk over the road. The best, and most unusual, part of this village was the geology and rocks. They were incredible as you could see the veins of quartz and metal ores running through them. We dug quite a few bits of quartz out for ourselves which we have on display in our house now. But they are not nearly as striking as how they appeared buried in the rock face. 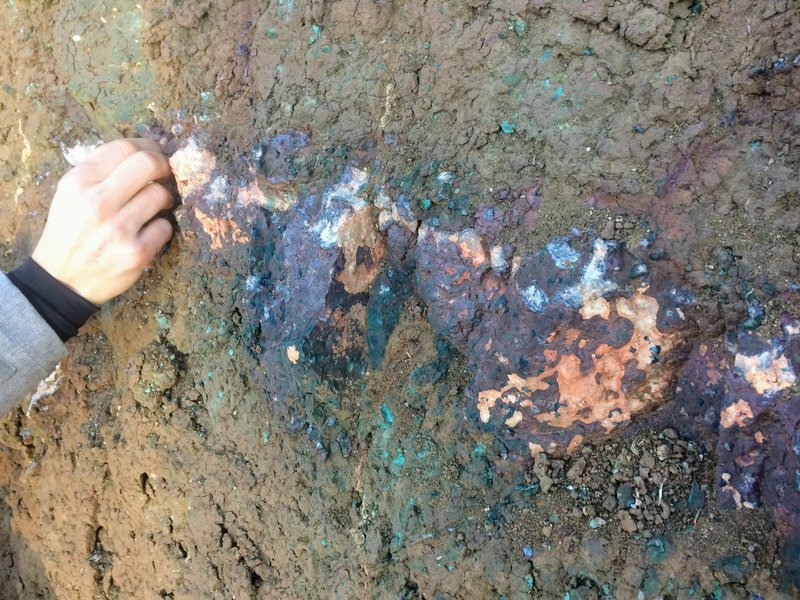 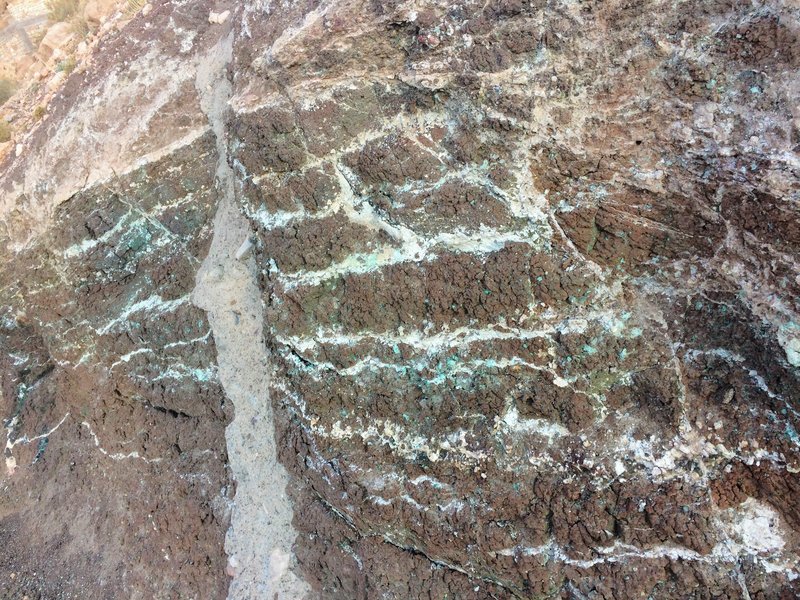 The following day the weather was glorious and we finally got a glimpse of what we had missed; the snow-capped atlas mountains now behind us… 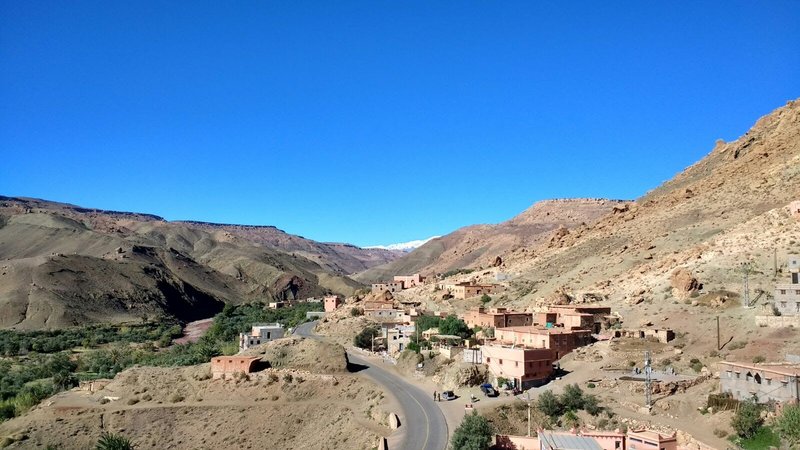 However, we focused on the day ahead as I had planned for us to visit the iconic Kasbah of Ait Ben Haddou. A traditional fortress and village built of mud brick and carved into the hillside.

I thought that this might be one of the few places where we would see the traditional mud houses, but as we journeyed from Tisseldei towards it we noted that all the houses we could see were, in fact, mud/clay houses. They blended into the landscape, clearly made from the mud/clay on which they were built. The only colours we saw to complement this were greens and blues, which only added to the natural charm of the buildings. 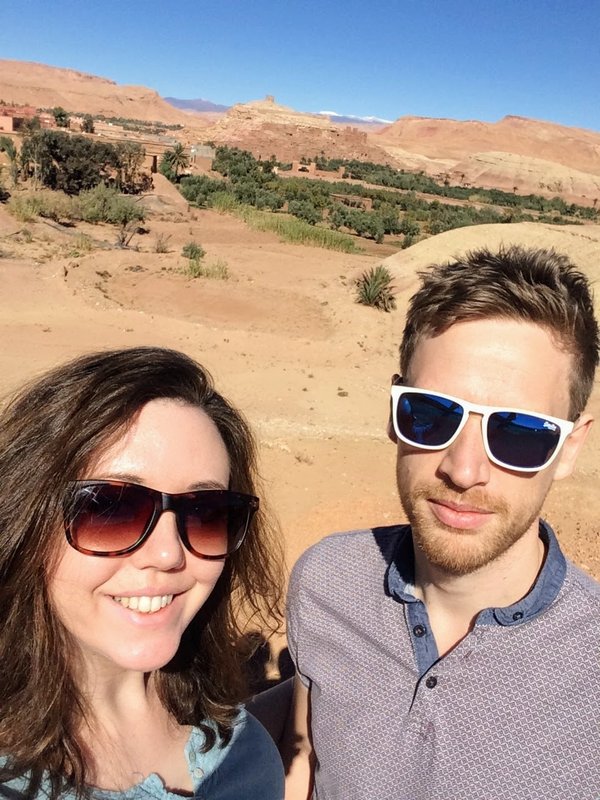 Ait Ben Haddou was spectacular. The setting was firstly amazing. The barren landscape on its own is beautiful and very different to other places we had been before, but seeing the Draa river cut through it bordered by a lush green oasis gave such a stark contrast, we would have been happy just visiting to see that! But just across the river was the traditional kasbah, rising out of the ground and up the hillside, in the natural colours we had identified so far… 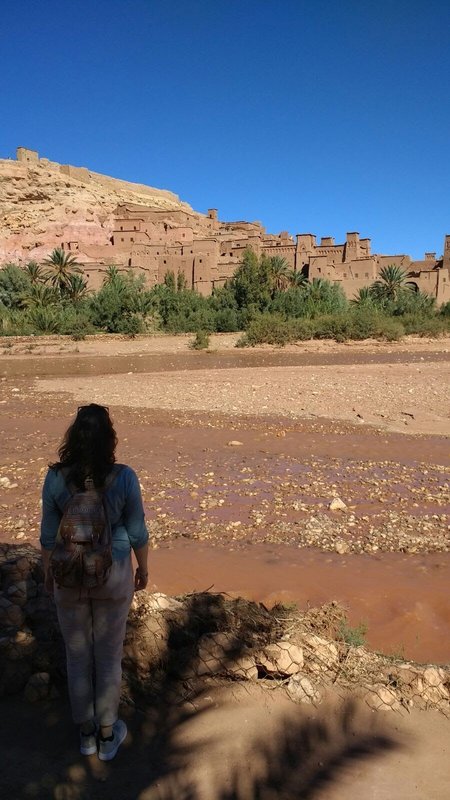 First spot of the kasbah 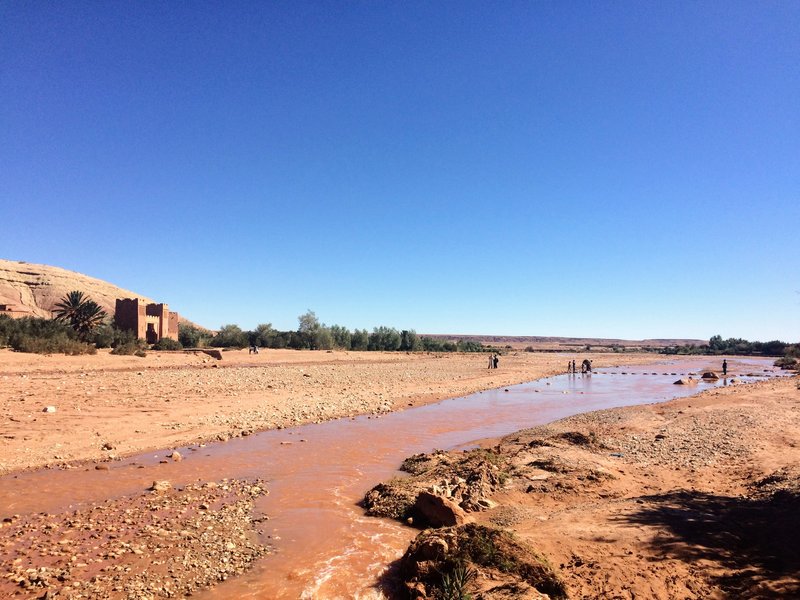 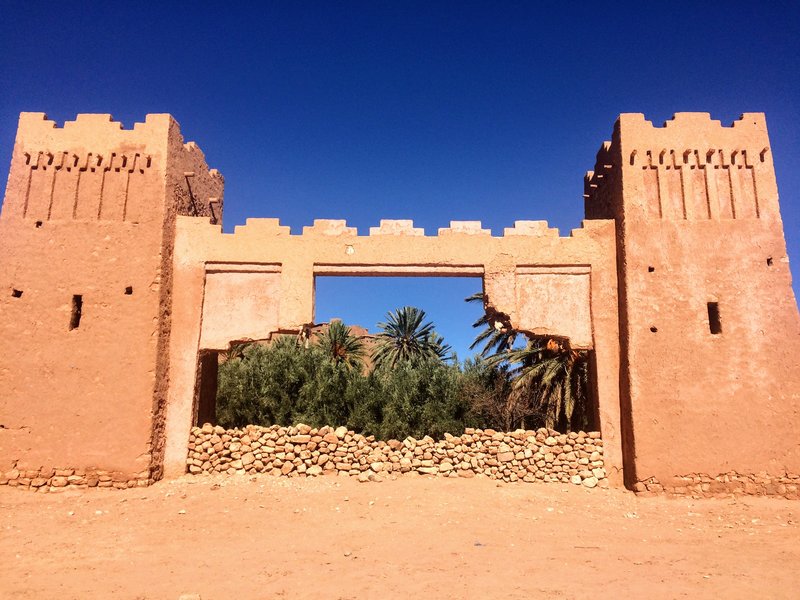 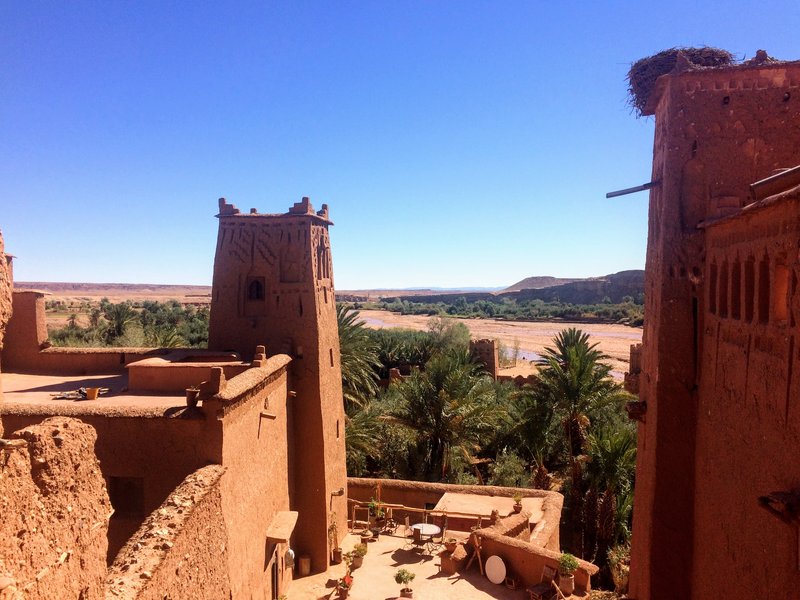 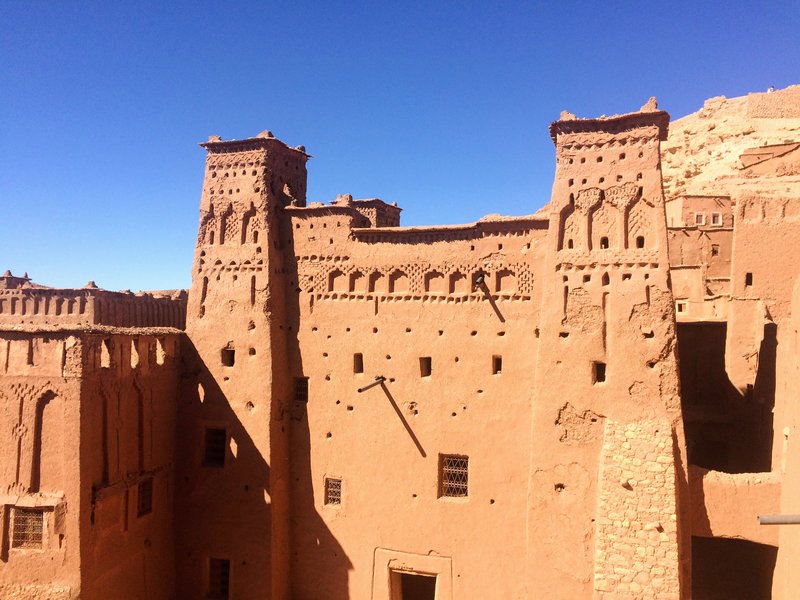 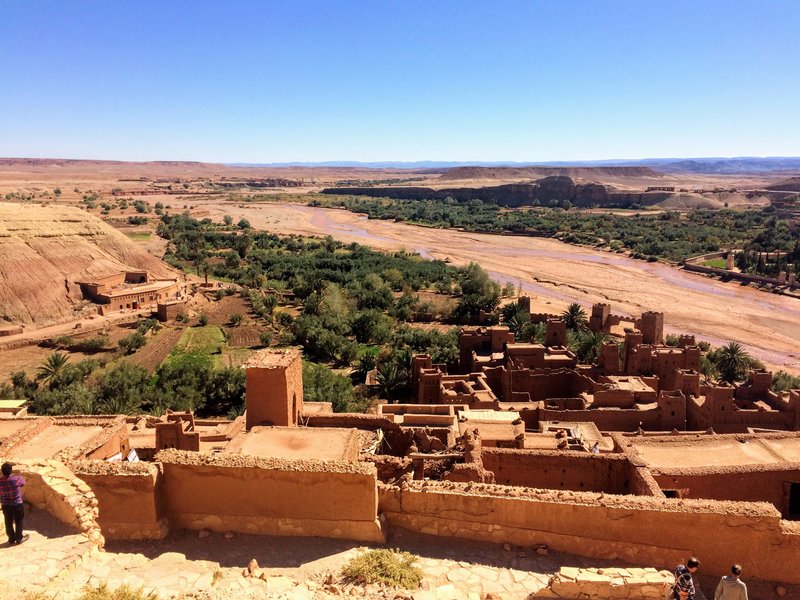 We climbed through the old kasbah, which then turned into a thriving village with many shops. You could climb all the way to the top of the hill and from here the 360 view out over the desert, kasbah, oasis and snow-capped Atlas mountains was breathtaking… 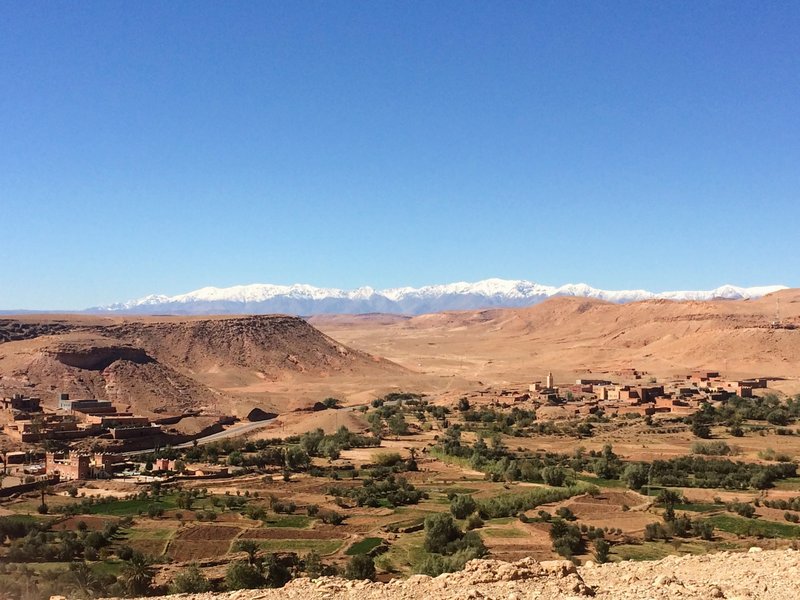 Playing around with panoramas!

We loved this place and the journey so far inspired us to take ourselves further into the Southern Draa Valley…. However, I had also heard that the Dades river valley through Ouarzazate and Skoura was beautiful, so we took a 1-night detour to Skoura, just east of Ouarzazate.