We arrived in Marrakech on Saturday evening and took a short walk to the arrivals lounge and passport control. We were excited and eager to see the new country and hoped we could get through quickly to make the most of our short holiday.

Unfortunately, Marrakech did not co-operate and we joined the back of a 2.5 hour “queue” of people waiting to get through passport control. The room was bedlam… people pushing through the barriers and rope to direct the queue, fights and people fainting, arguments and the inevitable ‘tutting’ tourists trying to be British. The windows and counters of the passport control booths looked more like a bar on a Saturday night as travellers pushed up against them waving their passports trying to get served next. The process was incredibly stressful, but actually quite a good initiation for what to expect over the next week. 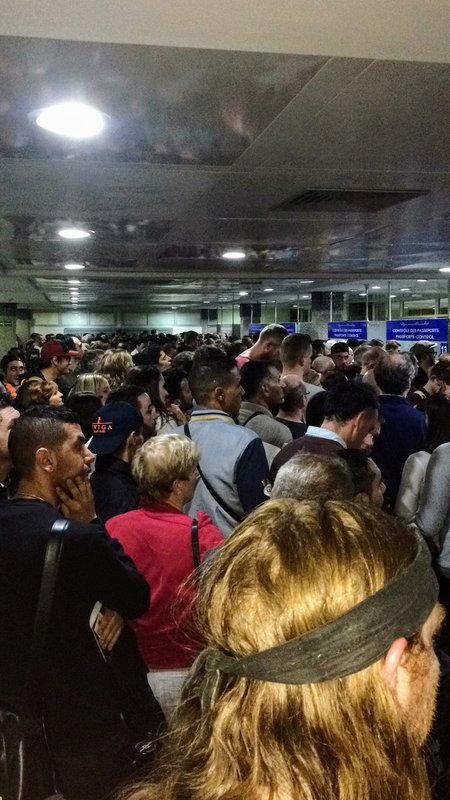 We eventually made it through and collected our little Punto, which seemed in incredibly good condition compared to the bumped and bashed cars we saw along the way. The journey to our Riad was eventful to say the least. It started with a ‘tap’ from a white van who seemed to think we had left more than enough space between us and the car in front and tried to help us out by nudging us forwards… cheers pal… and ended with some overly helpful Marrakeshis who were slightly obsessed with helping us park.

With slightly lighter pockets (obviously someone had to pay for all that helpfulness) we made it into the calming oasis of our Riad; Riad Challa. 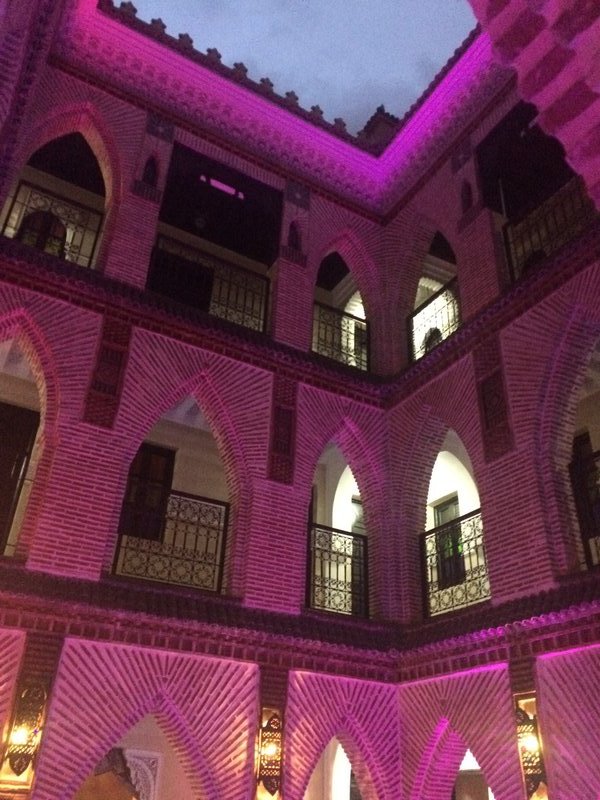 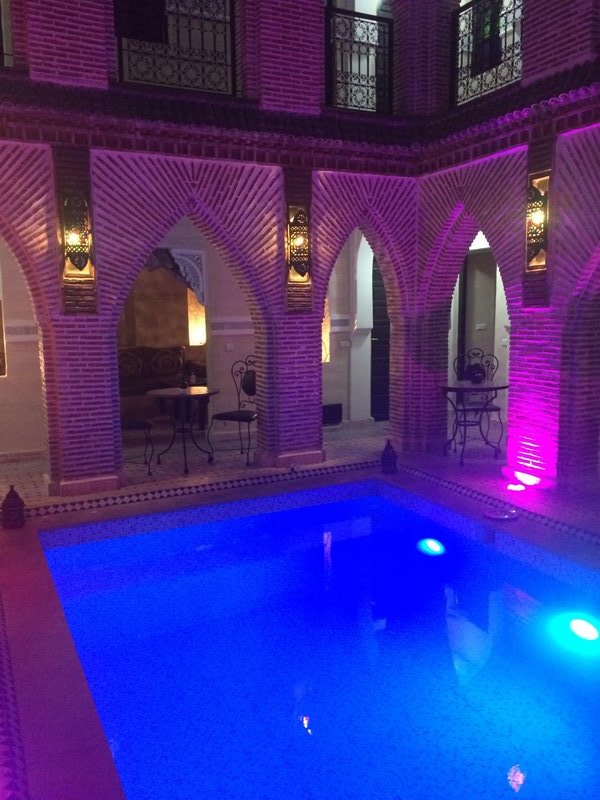 Although the owner of our Riad had told us that we may struggle to find food and that the city would probably be quiet, we found it to be quite the opposite. At 11pm Marrakech seemed to come alive, with street vendors setting up shops wherever there was space and seemingly doing great business. The square of Jemaa el-Fnaa was also alive with musicians, henna artists, monkeys and snakes charmers. We found some falafel and sat just chilling and absorbing everything. 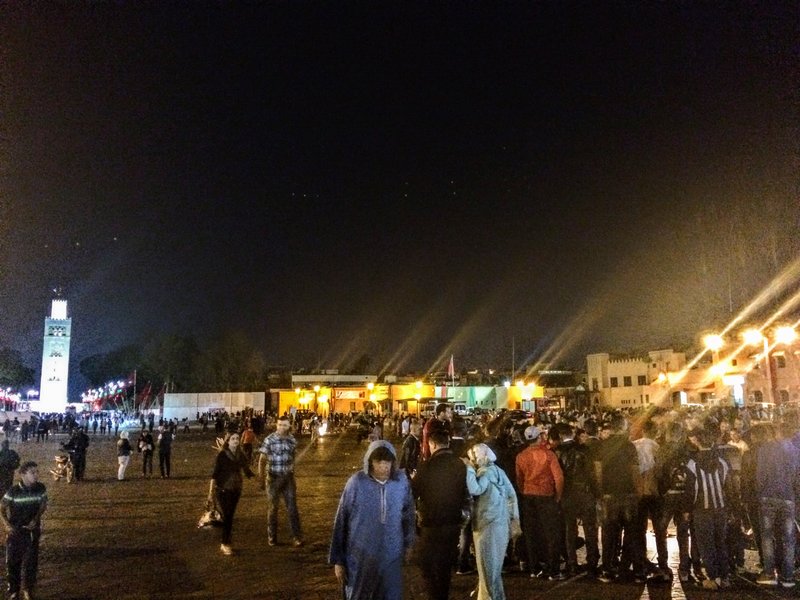 People circle to watch the musicians

The following day we spent the whole day exploring the Medina and the souks. We didn’t take many pictures as it seemed to be the trend to ask for money if a picture was taken of you and we didn’t have any change! We visited the souks, the main mosques and the Saadian tombs. We walked everywhere and stopped occasionally for coffee and people watching. 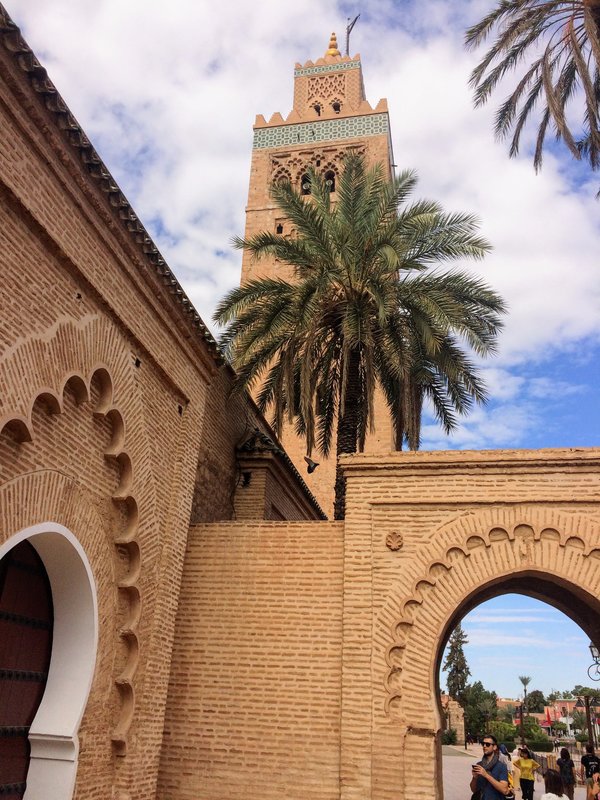 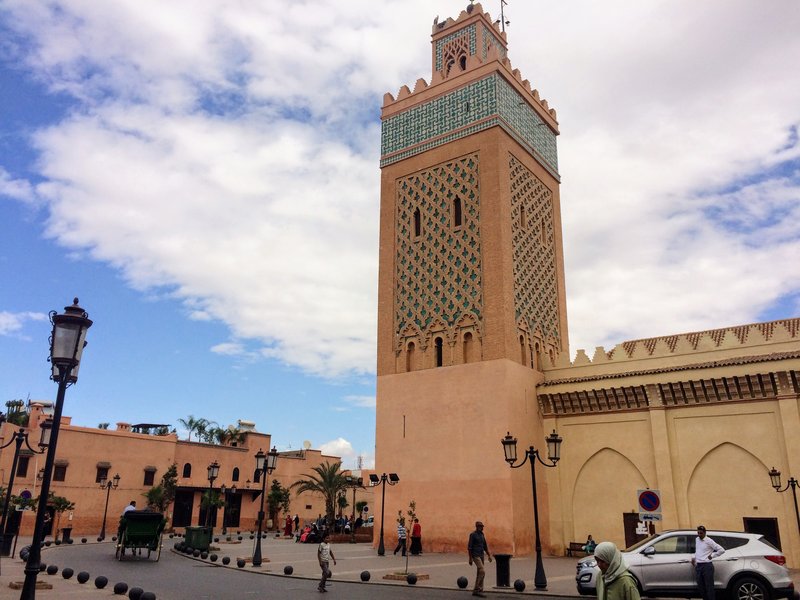 In the Kasbah district 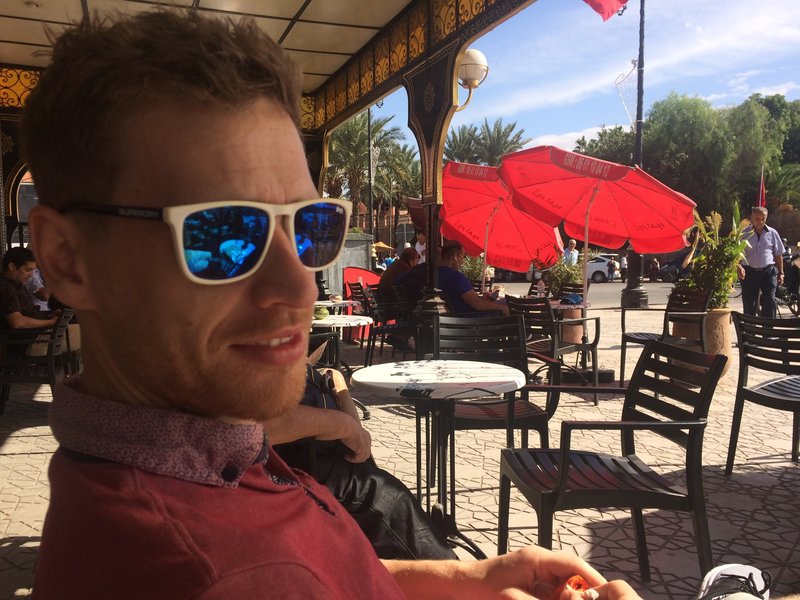 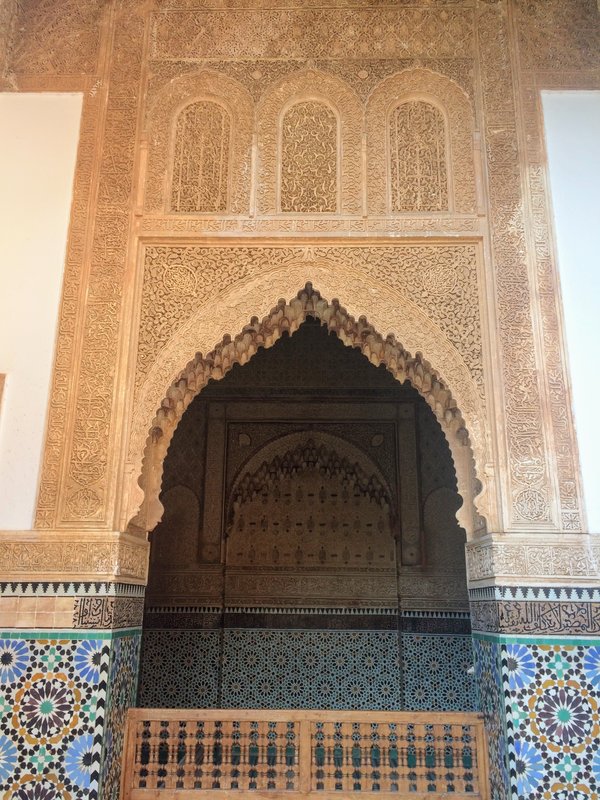 We tried to stop for food at a great cafe I had heard about; Roti D’Or, but the queue was down the street(!) so we settled for one of the standard cafes looking out onto the Jemaa El-Fnaa square – it was average. 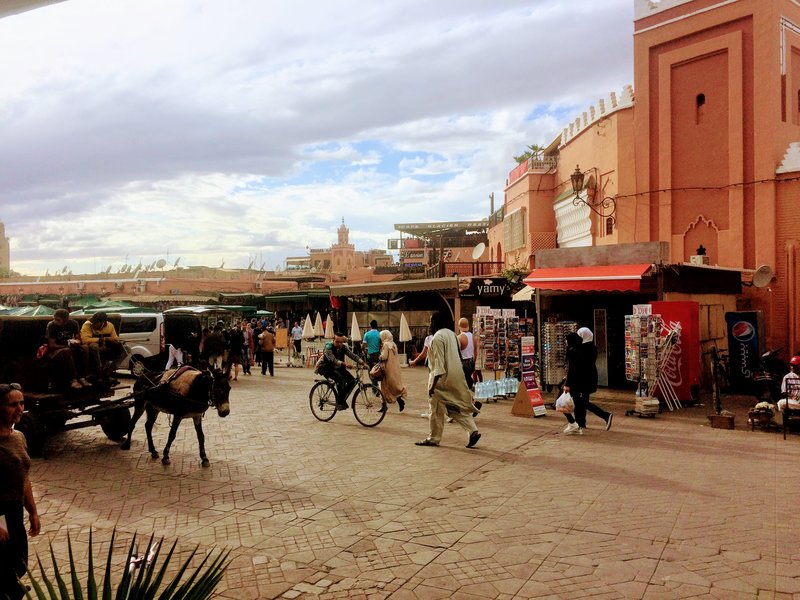 That night we decided to venture South from our Riad towards the Medina walls and the Toureg district which is centred around a nice square. The walk down Riad Zitoun Lakdim street was great and we wished we had found this part of the city earlier in the day. We had a few (a lot) of cocktails at Kosybar, which we both really liked. It had a view out over the square and you could even see the storks nesting on the city walls from the balcony. 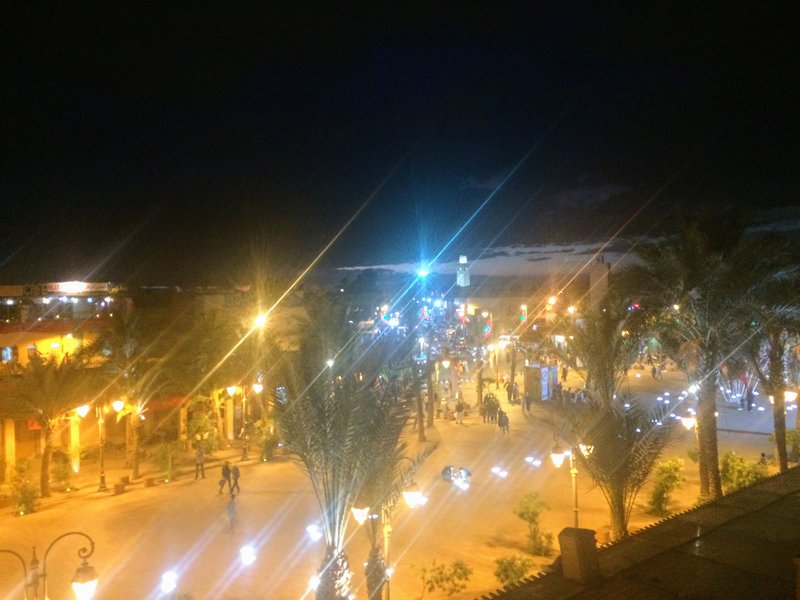 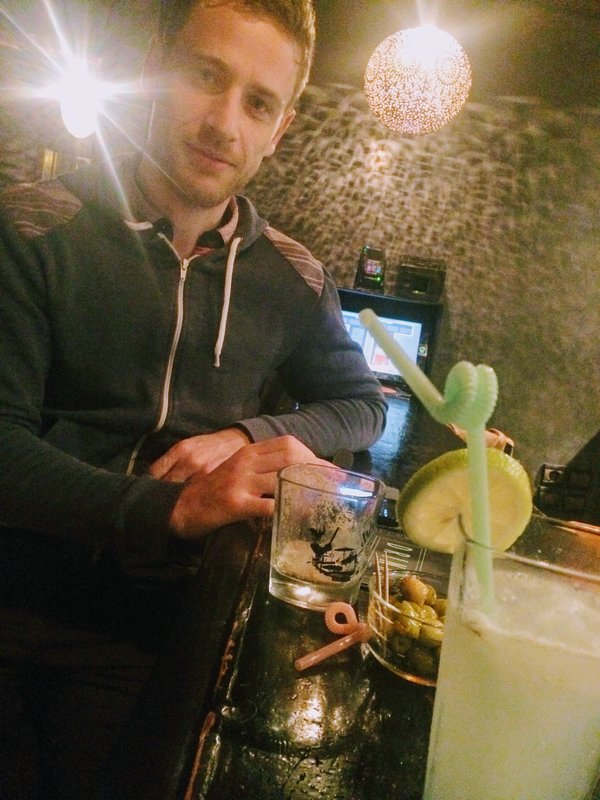 After some (too many) shots of Cachaça we stumbled back towards our Riad and on the way into a fantastic little alternative restaurant called Fox Art Food which was run by a group of young Marrakeshi friends. We got chatting to them and ended up staying there a while. 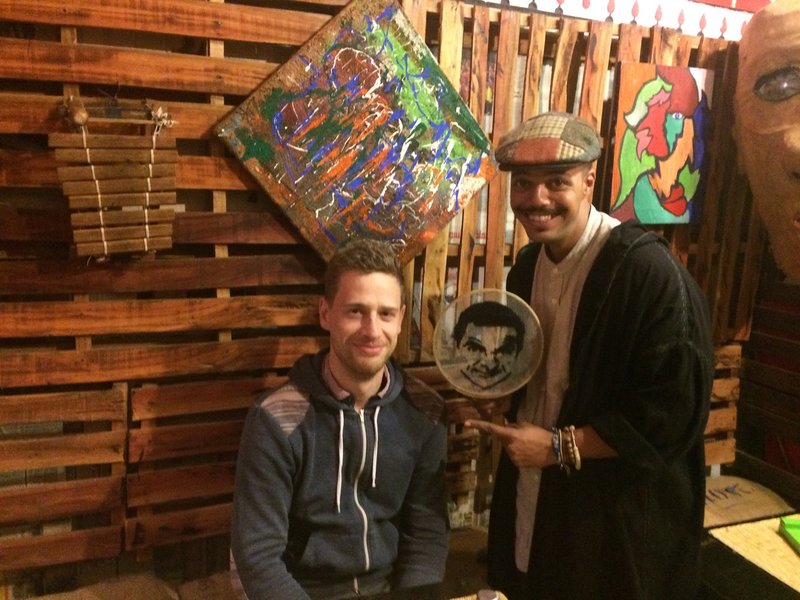 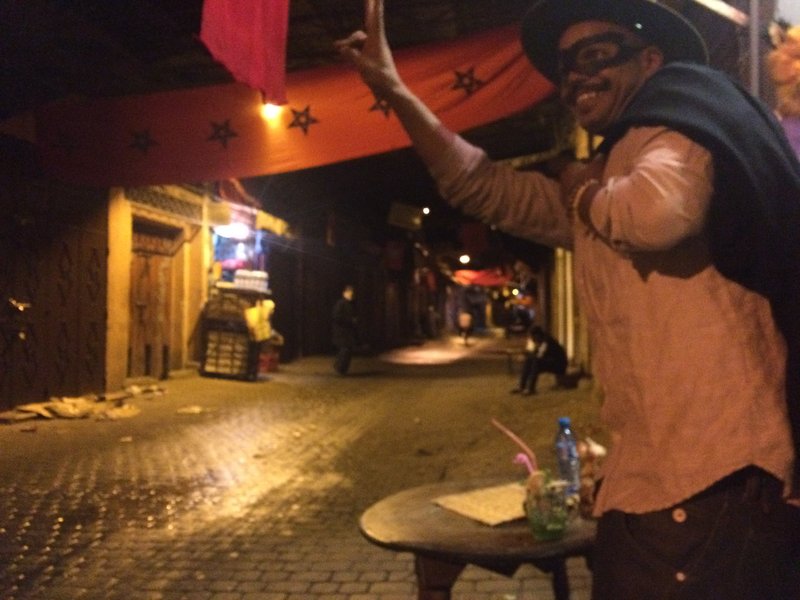 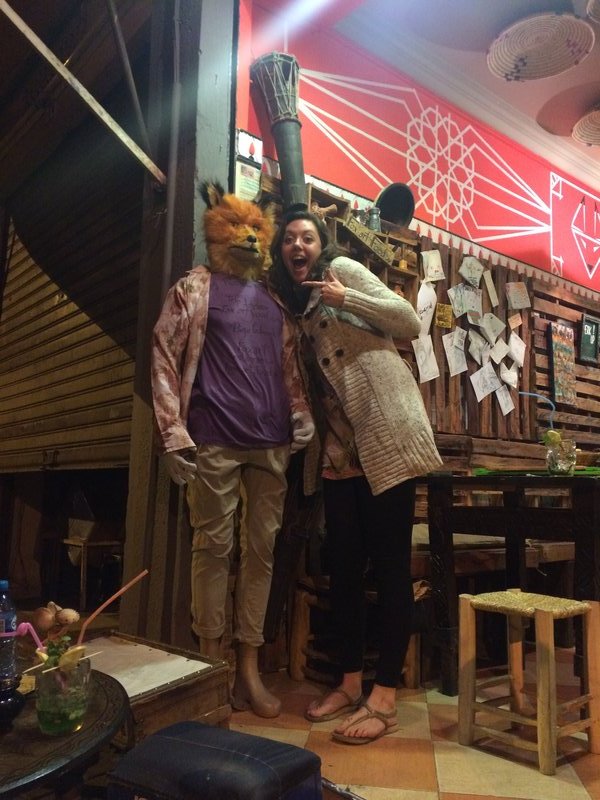 There is no denying that Marrakech is crazy, it is wildly interesting – there’s almost too much going on and too much to see. The people are everywhere, packed into tiny spaces and streets that run between the seemingly endless shops and souks. It’s chaos. Whilst we enjoyed our day here, we had hoped for a more relaxing holiday and so the following day we moved on from Marrakech…