Hvar, along with the Plitvic Lakes, was the other crucial place I wanted to visit, mainly because of what I had read about the Pakleni islands and the natural beauty of the ocean here…. It did not disappoint and Pete and I had our best days in Croatia here.

We arrived on the ferry into Stari Grad, the major port on the island of Hvar. This wasn’t the plan, but we went with it and fortunately, there was a lot of onward travel waiting to take us to Hvar because of the cancelled cats. There were 2 tourist coaches that were slowly filling up… Pete looked at me with fear in his eyes, we didn’t come to Croatia to get on a tour bus, so I scouted the area and luckily, there was a small 10-seater minibus which was ready to take any overspill from the coaches… we pushed to the front and got the best seats 😛

We finally arrived in Hvar town and again, thanks to being off-peak, we found peace and serenity. 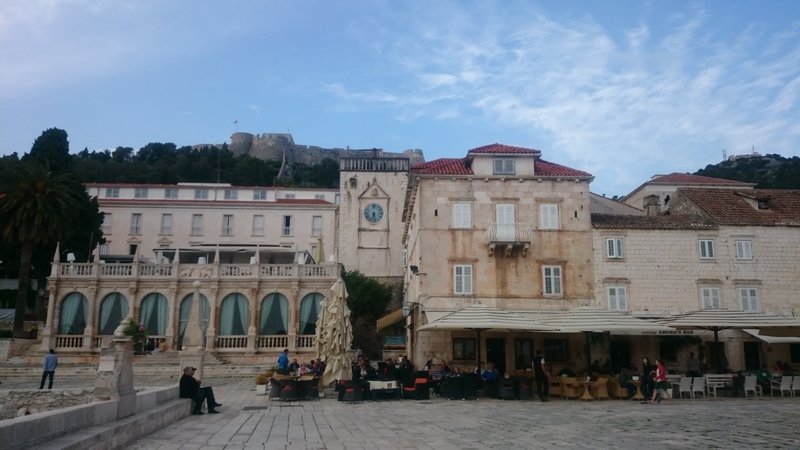 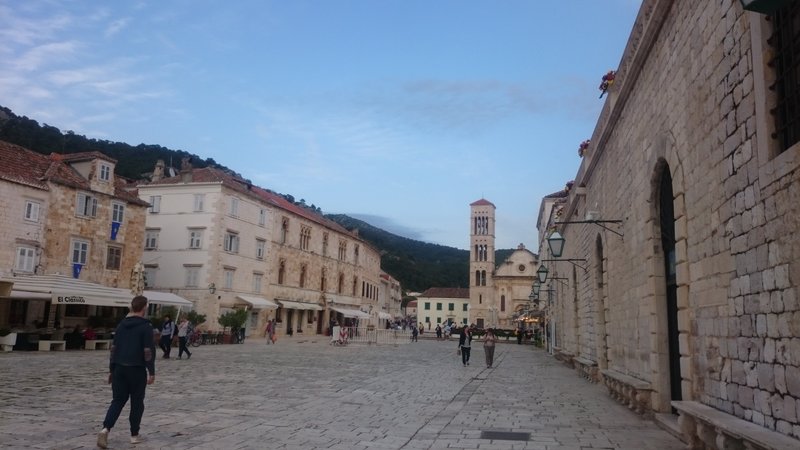 I’m sure these streets will be full in summer…

We checked into our guesthouse; ‘Hostel Vila Zorana’, where I think we were the only guests, half of the town was shut! Our room had been upgraded to the apartment – although we never used it… 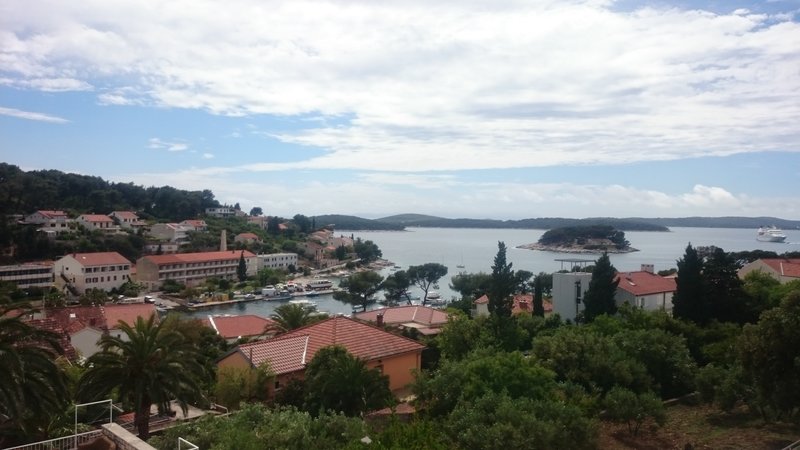 View from our balcony out over the Pakleni Islands

The first day in Hvar we rented mountain bikes from one of the shops in the town and headed out to some of the beaches on the South side of the island. they were quiet, peaceful, stoney and COLD! I didn’t dare go in the water deeper than my knees; it was freezing! 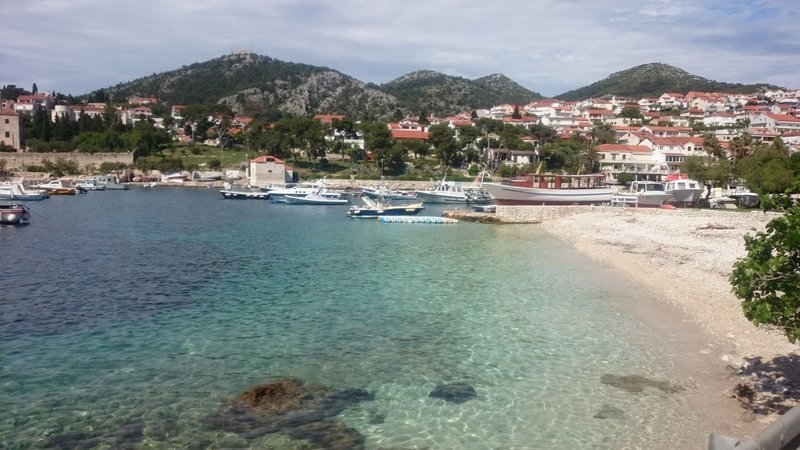 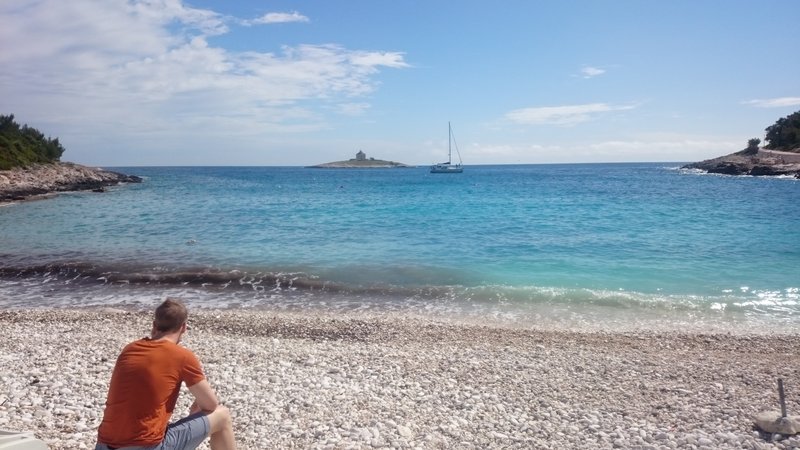 When we got to basically the end of the road, we turned around and went back into the town and out to the beaches to the West of Hvar town. This area of Hvar was more developed, but all the restaurants and hotel resorts seemed to be preparing for summer, painting, building and fixing the seats ready. We felt so lucky to have most of it to ourselves. 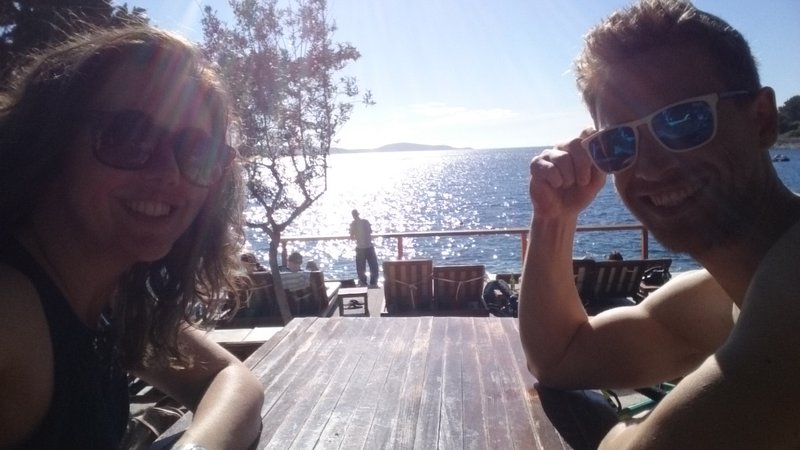 Again we reached the end of the road, so this time we decided to go North out of Hvar and up the steep hills up to the viewpoint of Hvar Fortress, this was my favourite bit, as you got the most incredible views out over the Pakleni Islands and the town. It was also lovely and cool up there in the wind. 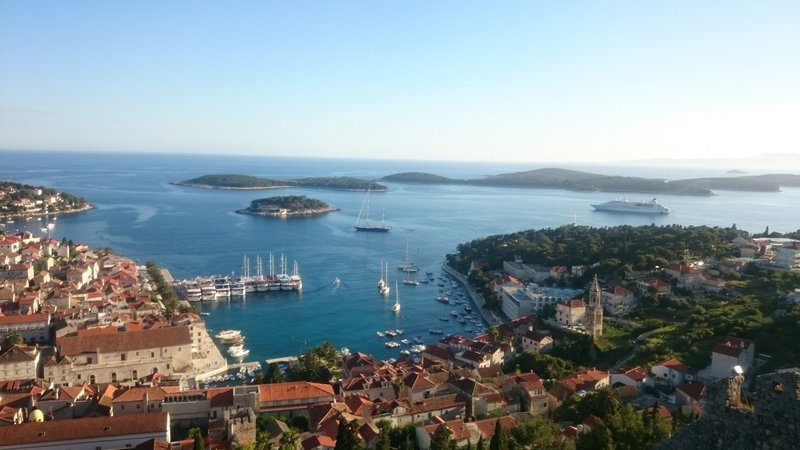 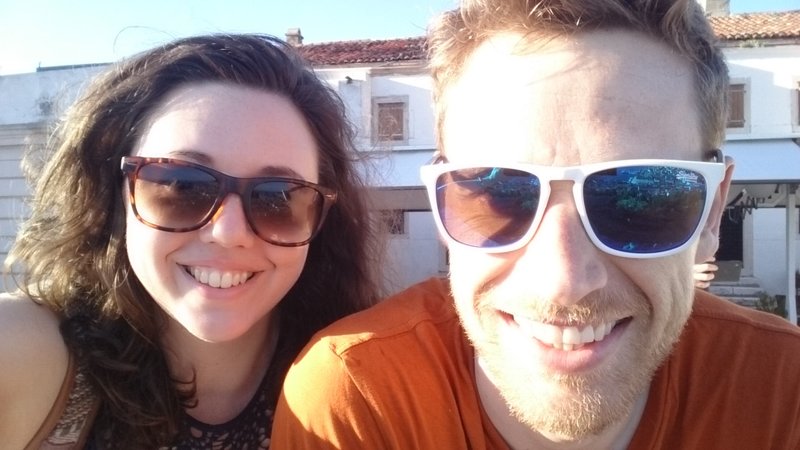 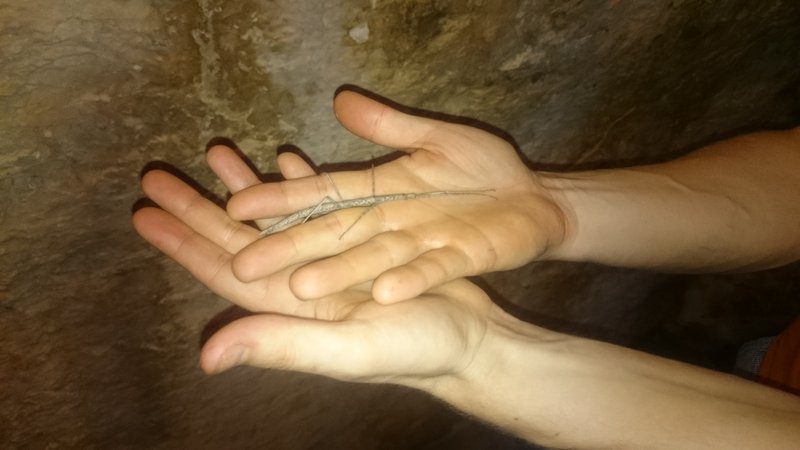 Making friends in the jail of the fortress! 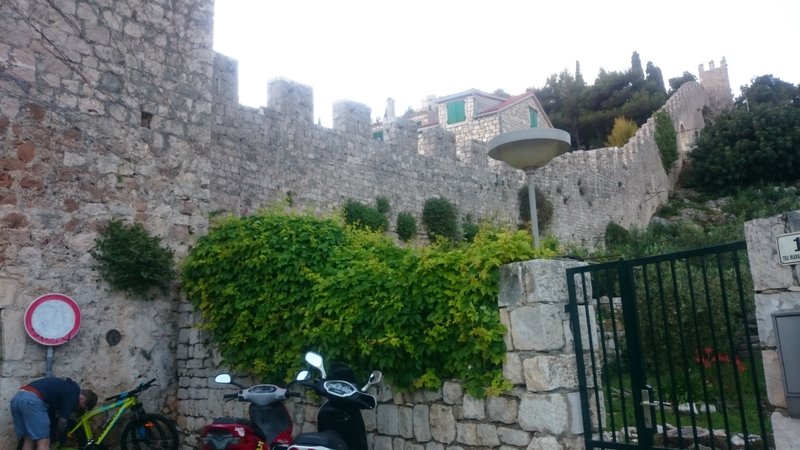 If Pete and I were totally honest, the food that we had experienced in the whole of Croatia up to this point was below average… we had been hoping for a taste of the med almost, the climate is similar and most of the places we visited were on the coast so fresh fish and salads got us excited… but it really wasn’t the case. We really struggled with food, despite always checked TripAdvisor along the way…

So, in Hvar town, we decided to change that, up our budget and splash out on some good food. We tried Dalmatino Restaurant, just in Hvar town and it was amazing, well worth the 40euro we spent there for the next couple of evening meals! The service was amazing and they brought small aperitifs and liqueurs between every meal. My TripAdvisor review is here. 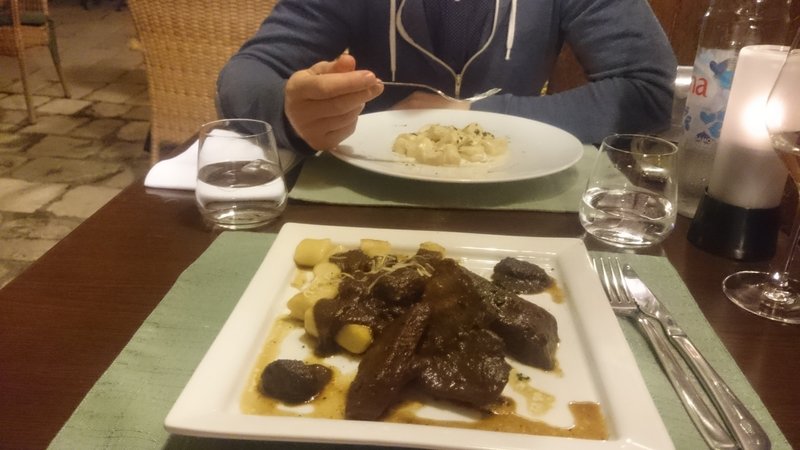 The next day we had always planned to hire a boat, we got one for £25 for the day from a friend of the Hostel owner; which I thought was a bargain.
The whole day was amazing. Pete got to play captain and he was amazing at it, and I got to sit on the front of the boat and look at everything enjoying the sights!

We drove out to the Pakleni Islands, stopping at a few of them to visit the beaches. 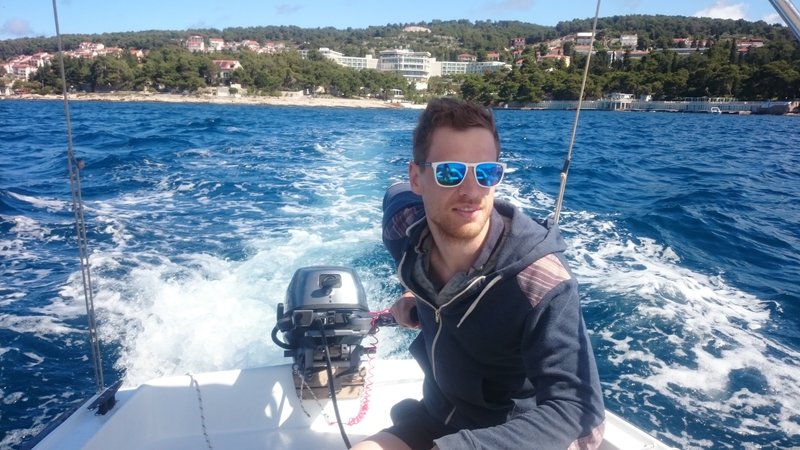 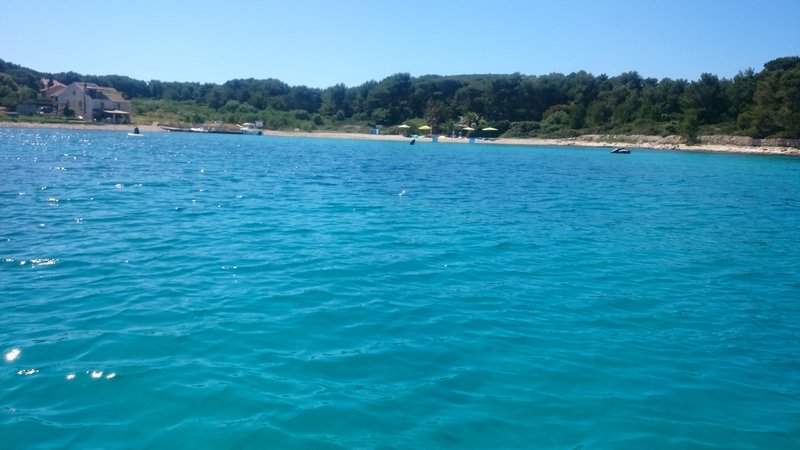 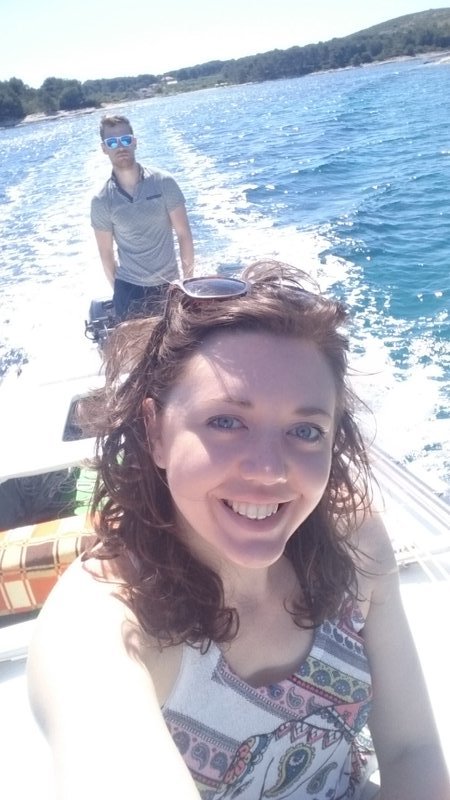 However, the boating wasn’t all rosy as we had some issues when it came to anchoring… The first place we stopped was Palmizana, where the idea was to park the boat and walk up and over the island to a nice beach on the other side where there were nice restaurants. When we arrived there was a long Jetty to moor on, so we did, before someone shouted that we would have to pay to moor there… being the ultimate thrifty travellers we moved to somewhere else and dropped the anchor…. Then we saw that there was a small boat house which was free to use and had a lot of similarly sized boats in it… unfortunately, when we tried to move we realised we were stuck! The anchor was completely wedged in a chain on the bottom of the sea. We tried to break it free for about 15 minutes before Pete decided there was only one last resort before cutting it off and leaving it there; he stripped off and jumped in! Using the anchor rope for guidance he shut his eyes and dove to the bottom to free the anchor! It worked! He must have dived 10 metres. He got back in the boat shivering – the water was NOT warm. But my hero Peter saved the day! 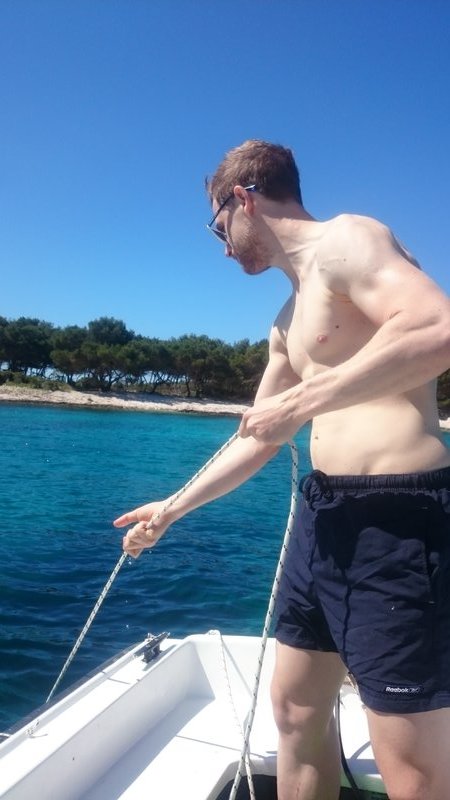 From here we then manoeuvred into the tiny boathouse – (it was great teamwork!) – and walked up and over to the beach. It was beautiful, but nothing special compared to other beaches in Croatia we had seen… 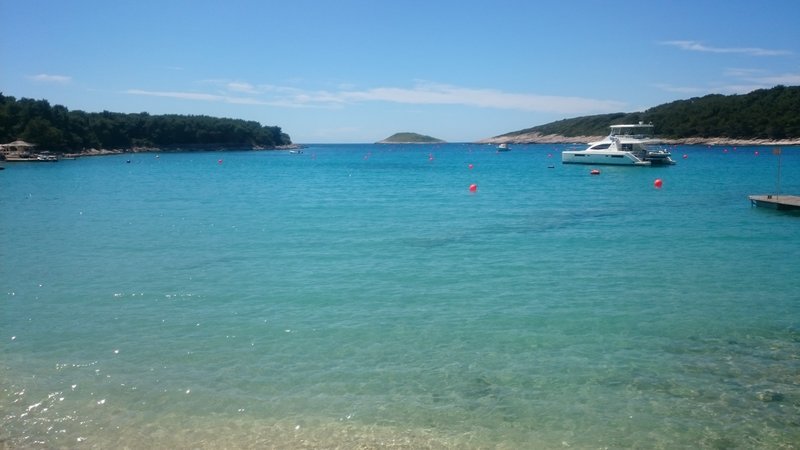 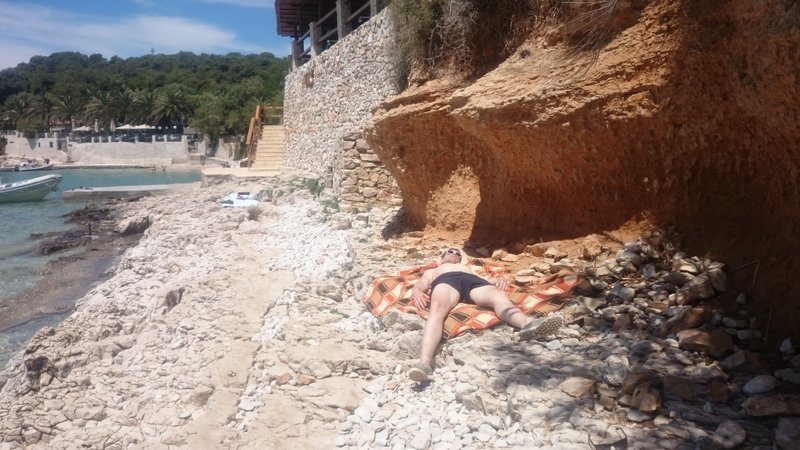 Unfortunately, the beach wasn’t sandy and the rocky ones aren’t the most comfortable!

We then headed over to Jerolim island which apparently had a nudist beach… but sadly there was nobody else there except some repairmen working on the restaurant – fortunately their clothes were intact!! 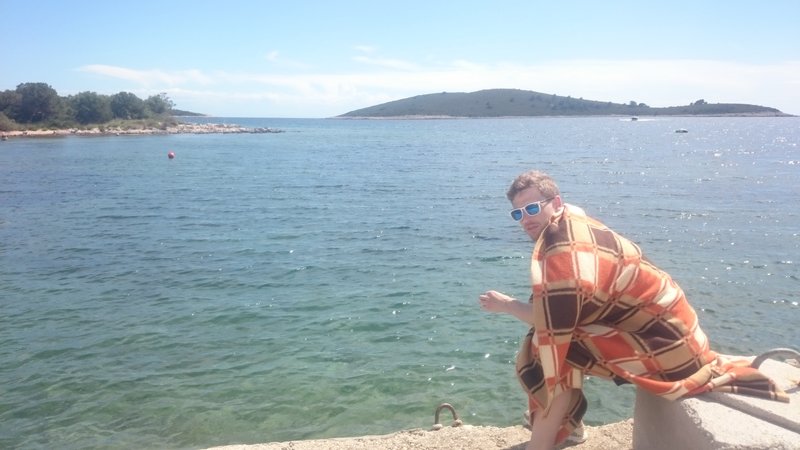 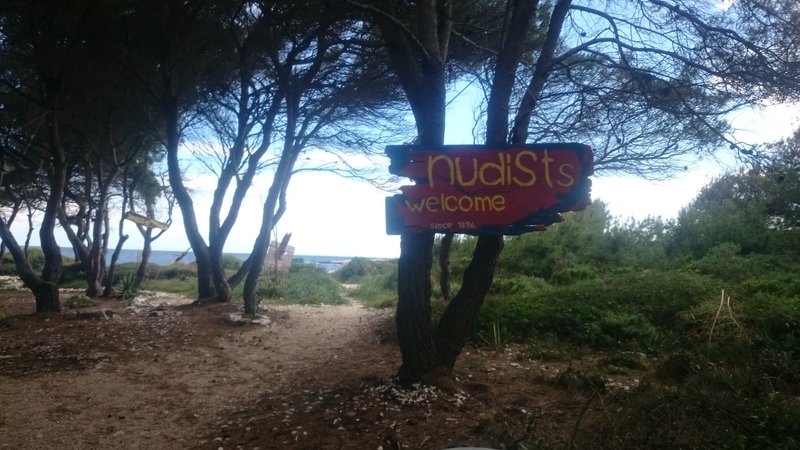 Pete was excited to visit this beach

When we returned to the boat from this beach, the anchor was once again stuck, but this time much deeper than before. It was also later in the afternoon and a lot cooler – needless to say, Pete did NOT want to be a hero again. So instead we manoeuvred the boat to try and dislodge the anchor. Luckily, the water was so clear you could see exactly what you were doing and after around 15 minutes we were free! 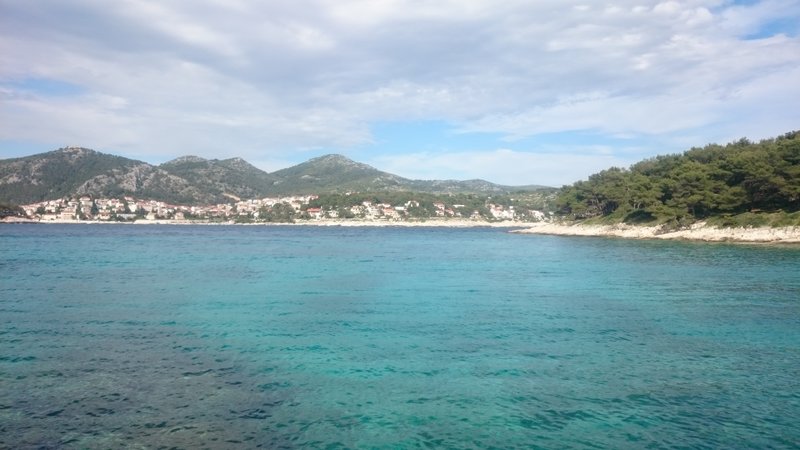 All in all, it was a great day on the boat, the Pakleni islands were peaceful and beautiful but maybe they would have been more interesting with a few more people and some open restaurants!

The next day was sadly our last day in Croatia, but our flight home was late at night, so we decided to take a nice leisurely trip back to Zadar via some of the coastal towns along the way.

The catamaran was running again, so we got the first one out in the early morning back to split directly. We picked up our car which had stayed safe in the back streets of Split and headed out on the coastal route to Zadar.

We headed first to Sibenik and stopped for lunch at a lovely little vegetarian cafe before heading up towards Skradin where we planned to visit the Krka national park which was supposed to be like Plitvic. However, the entry fee was very high and it seemed much more touristy than Plitvic and not as nice, so we decided against it and continued on the coastal road. 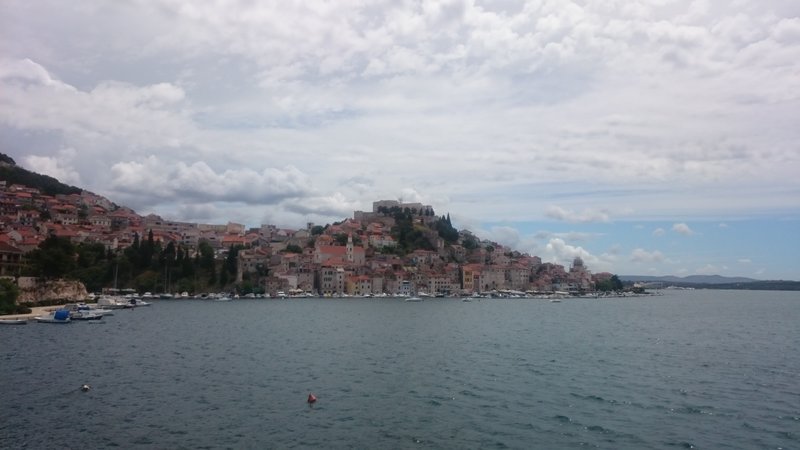 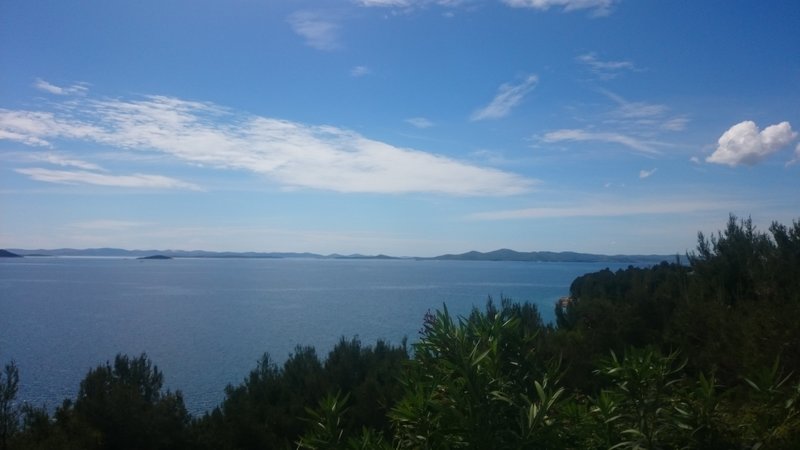 View from the road

We stopped at a few more places along the way, but we spent the longest in Sukosan, walking through the village and having an above average meal for once! We spent the rest of the evening trying to hit a buoy with stones on the beach. 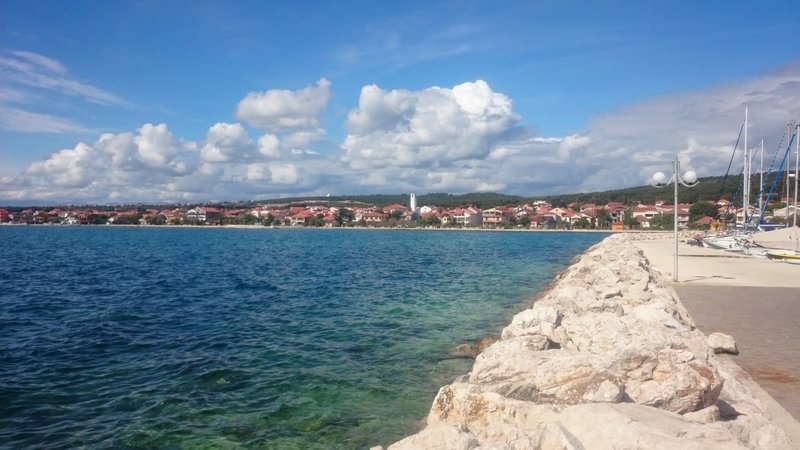 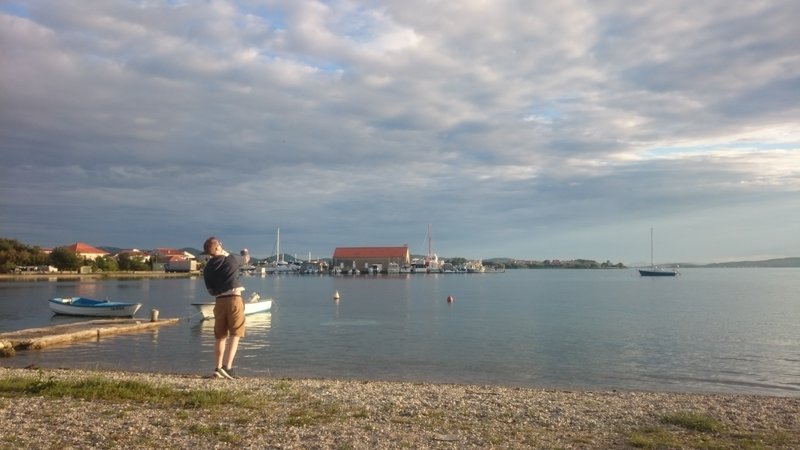 As a whole, Pete and I loved Croatia. I split the trip up into 3 parts really, trying to capture Croatian architecture and culture, natural beauty and relaxing adventure. I think we certainly achieved that in the very short time we had; we really got the most out of our trip. Although we both agreed that without Dalmatino restaurant, our opinions of Croatian food would have been very low. The salad on the first day and the pizza on the last day were the only other saving graces… But really what I will take away from this holiday is the beauty of this country. The natural landscapes are incredible and the architecture and style of the towns make for very pretty pictures.

Would we come back to Croatia?
I think the priority to return anytime soon falls below our desires to explore new places. So, for now, Croatia, we’ll see you around.