From Georgetown I decided to take a bus to the city of Ipoh, not a place in Malaysia that is well-renowned for tourism, but it was only a short journey away and the bus was cheap! The bus dropped me at a bus-station that was quite a way out of town, but I didn’t feel stranded for long; local people in the station showed me the way to the public bus into the city centre which cost about 20p!

Once in the centre I checked into an awful hostel… probably the worst I stayed in my whole trip, small with no window, pretty foul smelling and overpriced… but it was the only hostel in Ipoh that I could find. That evening I ate at an Indian restaurant, and on the way back to the hostel bumped into 2 swiss guys, Greg and Fady. I guess just cause we were all tourists, they said hi to me in the street and we chatted for a while before exchanging details to perhaps meet somewhere else in Malaysia since they were heading off.

The following day I planned to head out to some of the local temples and caves, but I was finding it difficult to work out how to get there. As I mentioned, Ipoh is not a busy tourist town, and so the infrastructure to the sights is practically non-existent, and I couldn’t find anywhere to rent a bike or scooter even the locals didn’t know how to get there. I eventually found one guy who was in the reception of my hostel talking to the manager who knew which bus to get to the temples, so I headed out.

However, I decided to go and grab some food first since and headed off in the opposite direction to the bus stop… a few minutes later, the guy who gave me the directions caught up to me in the street, concerned that I has misunderstood his directions. When I explained that I was getting lunch, he got excited to take me to his favourite kari mee (curry noodles) restaurant which we said was just around the corner. I figured that it was worth a try, and it didn’t seem like he was trying to trick me. So we did go just around the corner to a little oudoors stall which was quite busy, and the kari mee was…. amazing! 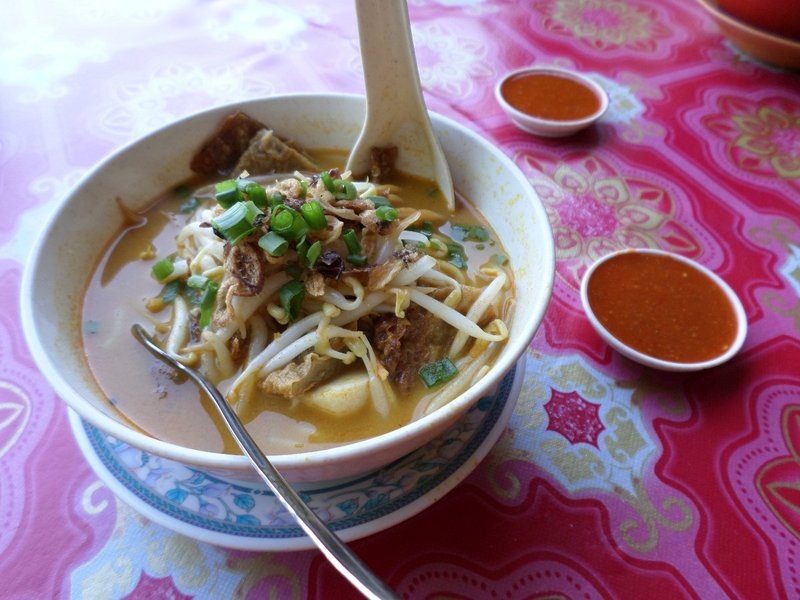 This is what sparked my addiction to kari mee, which I then had almost everyday for lunch!

At lunch, I got talking with Ikram and he asked if I was still thinking of visiting the caves… I was. Ikram asked if he could join me in visiting the caves since he had never been before. I was a little doubtful at first, but based on our conversations I agreed and we went to the Sam Poh Tong Caves in Ikram’s car. From here, we drove to Gua Tempurung, a massive cave system, and joined a walking tour through the caves which was full of local University students (who again all wanted photos with me, as the only tourist..). Ikram and I had a fantastic day, it really was fun. In our journeys between the caves we discussed the differences between our cultures and mainly religion. Ikram was muslim and couldn’t believe that I didn’t believe in any higher being. He kept asking, “but what do you think happens when you die?!”, he couldn’t get his head around it, and in the end we both just laughed about it! 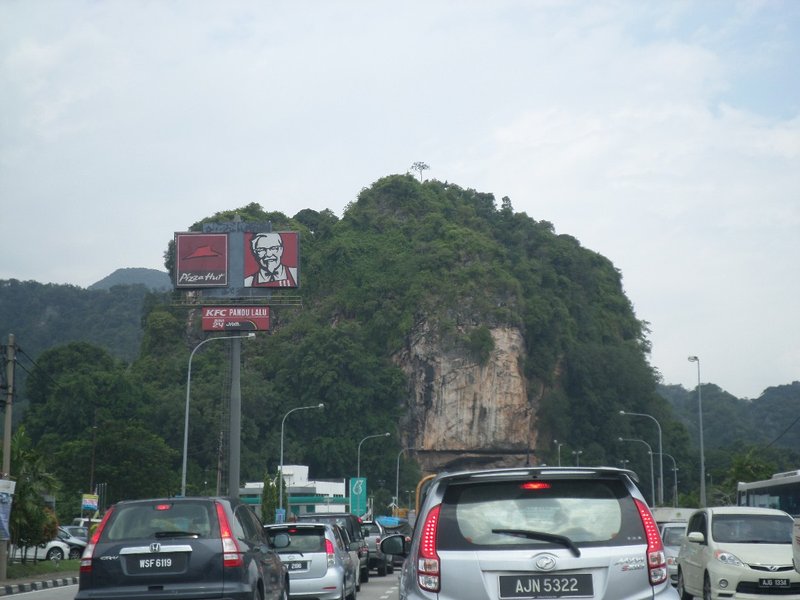 A beautiful view of limestone karsts…. oh, and a kfc sign 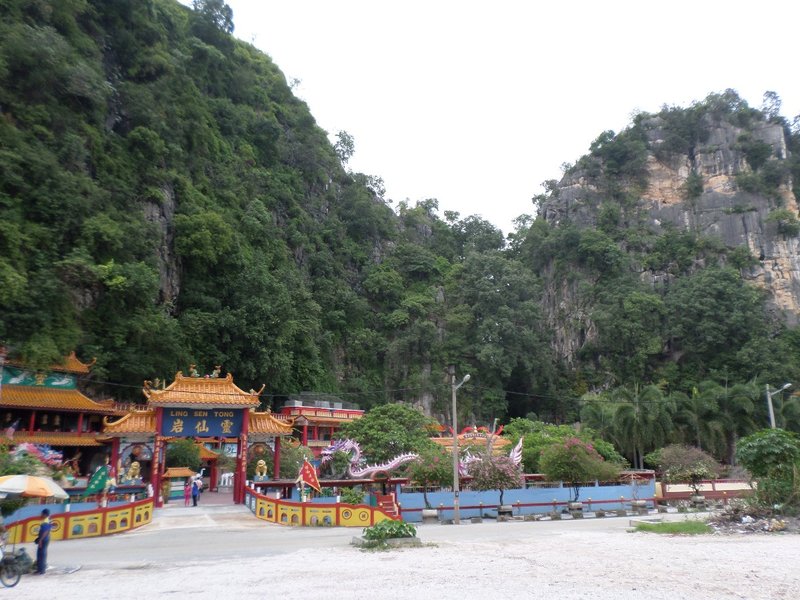 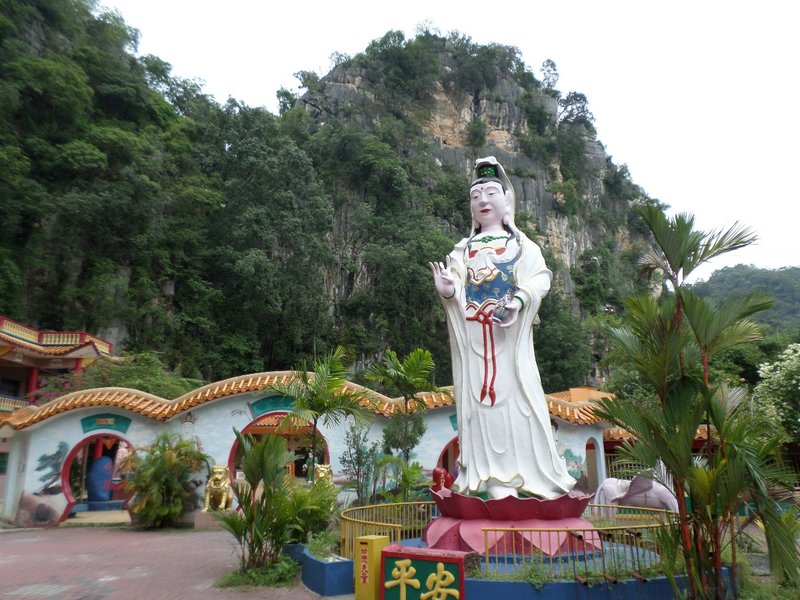 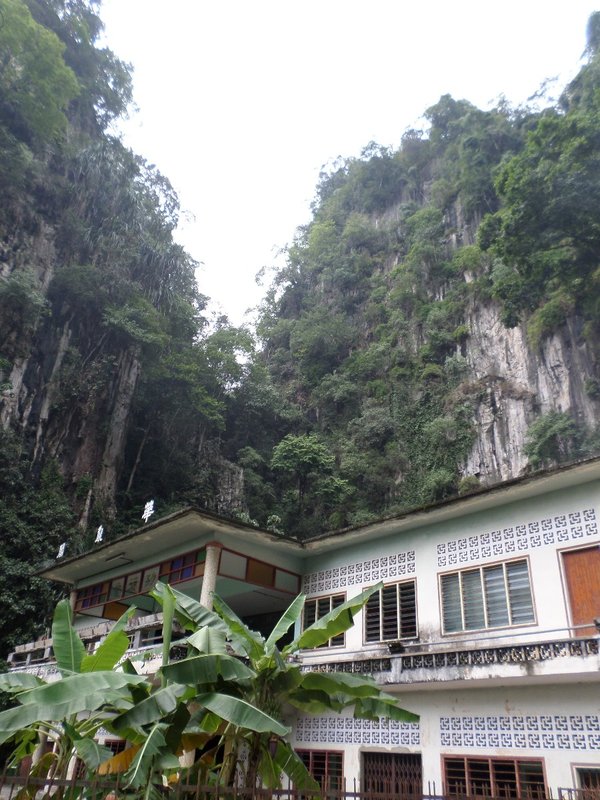 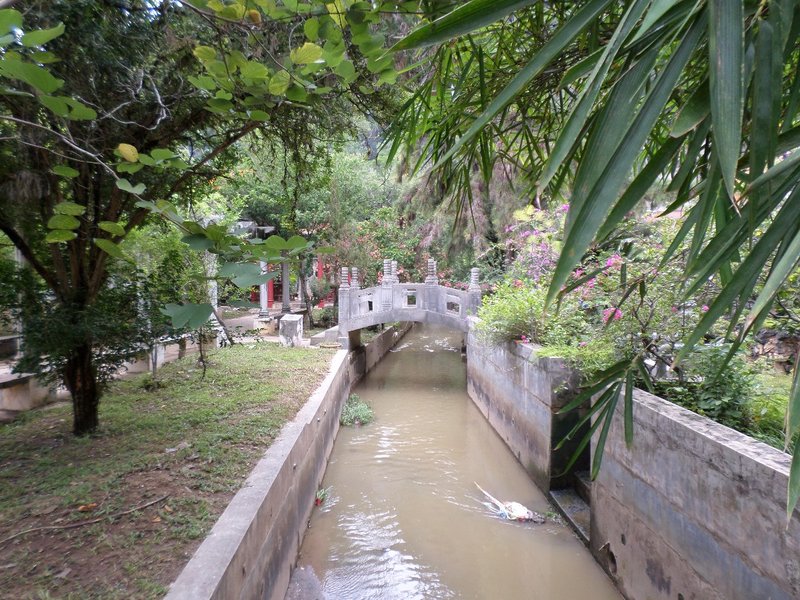 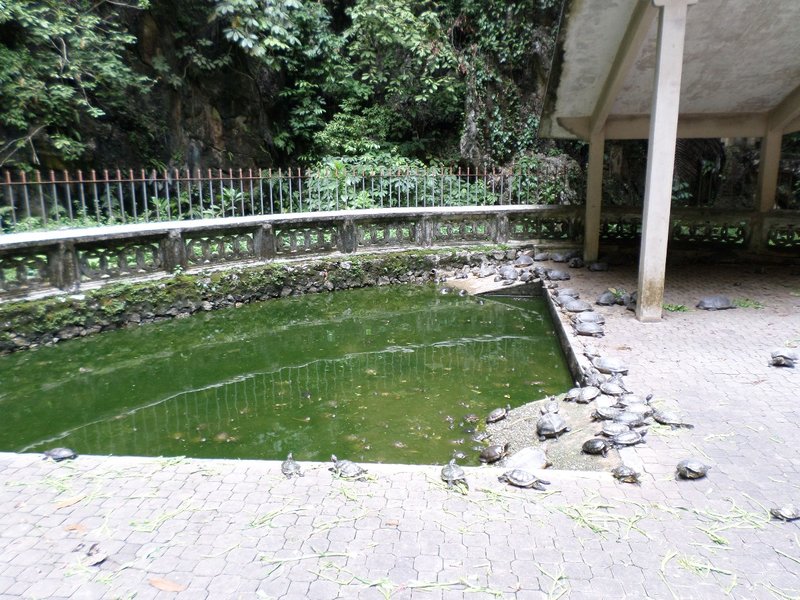 It is good luck to release tortoises within the temple grounds, and there were hundreds of them here (quite sad really) 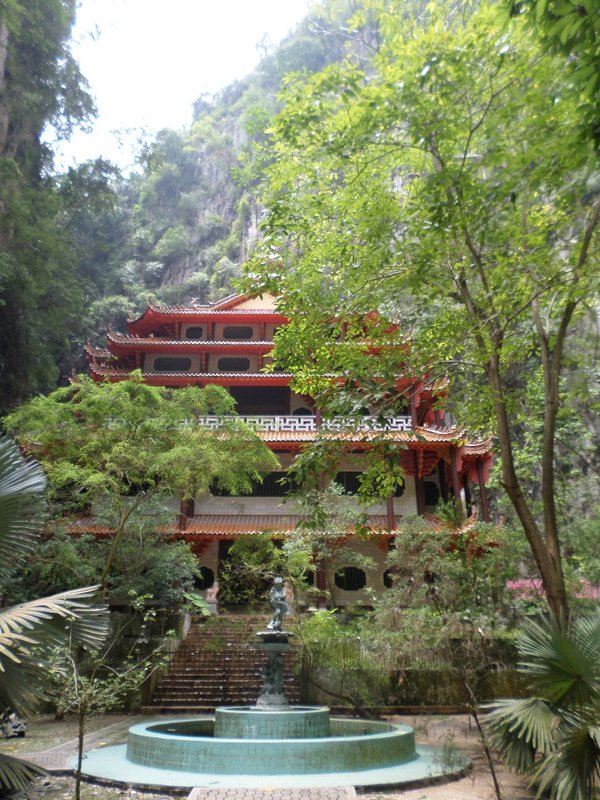 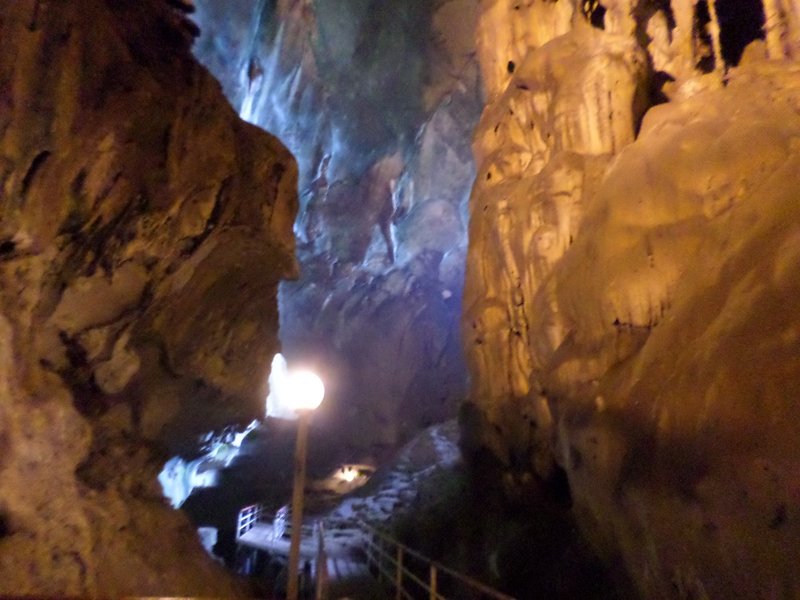 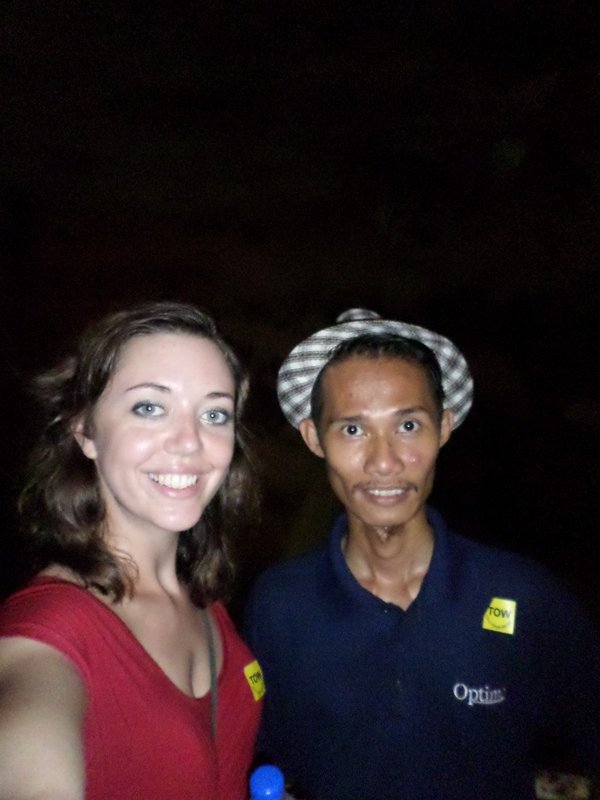 After the caves, Ikram took me for some cendol, (a malaysian dessert of shaved ice, coconut cream, sticky rice and sugary sweets… very odd), before dropping me off back at my hostel. 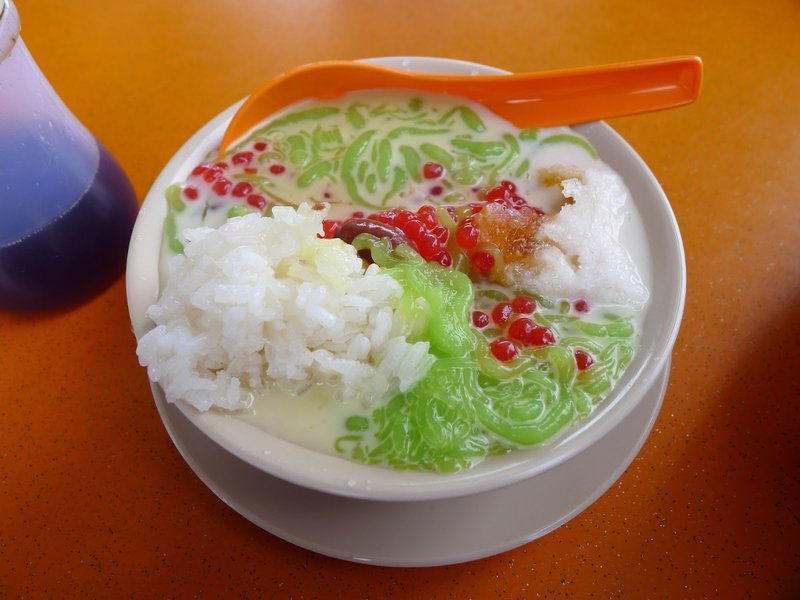 Back in the hostel I met 2 new additions to my dorm room; a Japanese guy called Takaaki and a Chinese guy called John. we arranged to go out for food together and so headed out to a local hawker market. The satay and peanut sauce we shared was pretty good, and dirt cheap. 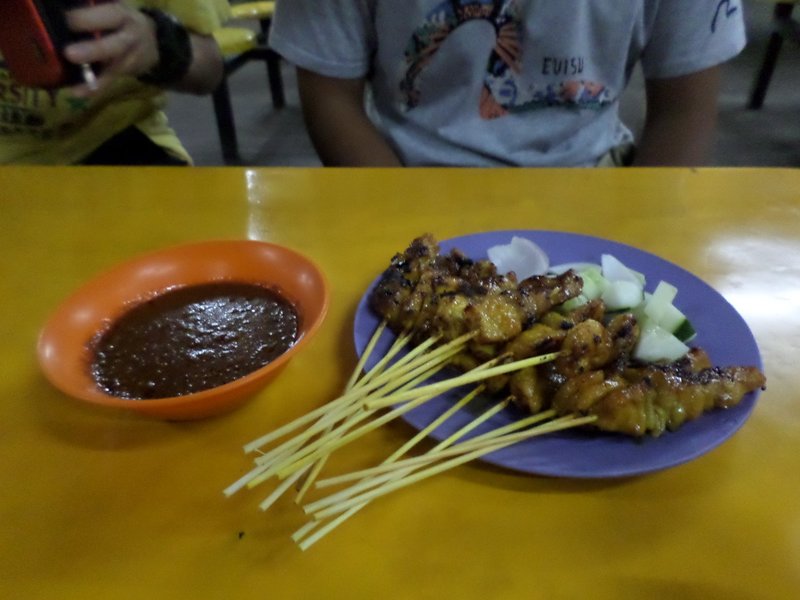 After our starter, we met Ikram at a small restaurant where he introduced us all to cheese naans with curry sauce, before driving us to a place where we go a make your own fish medley… which if I’m honest, I wasn’t a fan of. Most of the items where pretty fake tasting, like the artificial fish balls and fish sticks (a little like crab sticks but worse!). Ikram dropped us back at our hostel and after chatting before bed, we all planned to go to the bus station the next day to move on…

Ipoh was not a touristy city by any means. I was very lucky to have found Ikram who played as a personal tour guide and malaysian-culture educator! After speaking to both John and Taka, I found that their experiences of visiting the caves were very different to mine; a 2 hour bus ride there and an expensive taxi journey back… didn’t sound like the fun I had. Also neither of them had even heard about the large Gua Tempurung caves, it seems that it is more of a malaysian-tourist attraction rather than one for foreigners. I was beginning to feel the true warmth and hospitality of the Malaysian people. The day with Ikram was so fun, what’s more, he insisted on paying for everything that day and wouldn’t accept any of my money… there was once again, no scamming, not ulterior motives, just a genuine helpfulness and curiosity of tourists and foreign cultures (plus he also wanted to visit the caves and skive-off work!)

You could say that I took a risk… You are always taught not to go anywhere with strangers, especially strange men, and especially not in a foreign country, but the whole day just seemed natural. There were no apparent ulterior motives, I was never once suspicious, and I trusted my instinct to judge the situation. If I hadn’t gone with Ikram, based on public opinion or risk assessment, then I don’t know what I would have done… spent all day on hot public transport and potentially needing to be bailed out using expensive taxis….?!

I mean, it is easy to say it was the correct decision in hindsight, but I did learn a lot from this experience. The correct advice is to always keep yourself safe – at all times, not to put yourself in vulnerable situations, BUT – to trust your instincts and to trust humanity. Each individual should be judged separately, not everybody is out to get you.