I left Koh Phangan not because I wanted to (I could have stayed forever….), but because I had to… My thai visa had expired. I caught a very early morning boat/bus combo to take me all the way to Georgetown on the island of Penang in Malaysia. Only after paying a fine for overstaying my visa… eeek.

Once in Georgetown I headed towards Clockwise hostel which was unfortunately fully booked. Luckily, Claire, who organised the hostel, agreed to sleep on the sofa to accommodate me and we went out together where I had my first taste of Malaysian food; soon to become my all time favourite cuisine…

My first full day in Georgetown I walked around the water front and headed into the ancient Chinese clan villages and stilted houses built on jetties out into the sea. Walking through one of the quieter clan jetties felt a little odd, people were just getting on with their lives or hanging out in the back yards. I didn’t want to take pictures of them, and in some cases I felt like I was imposing on their personal space. So I headed to the larder clan jetty, also the more touristy. Here, most of the houses had been converted into little shops for snacks or tourist trinkets. The jetty was so busy here, I think I arrived just when a coach load of package tourists arrived and so this jetty was uncomfortable for opposite reasons. 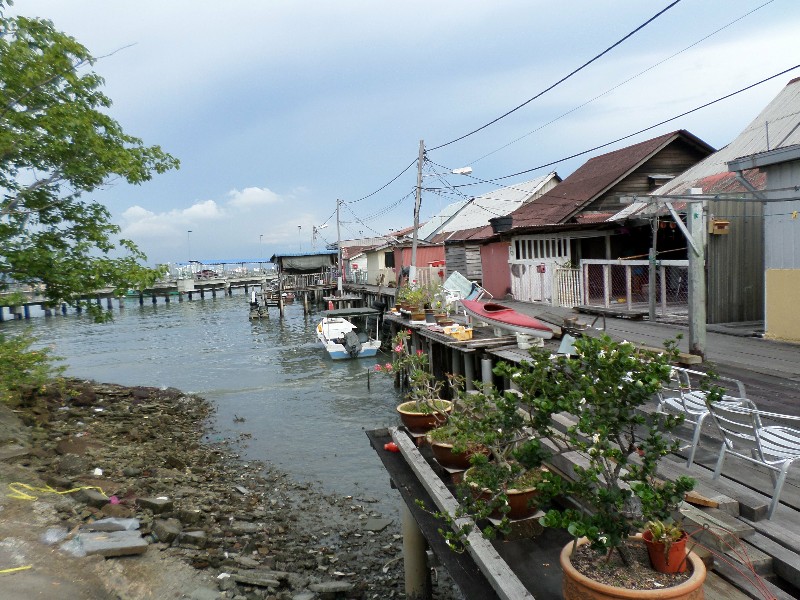 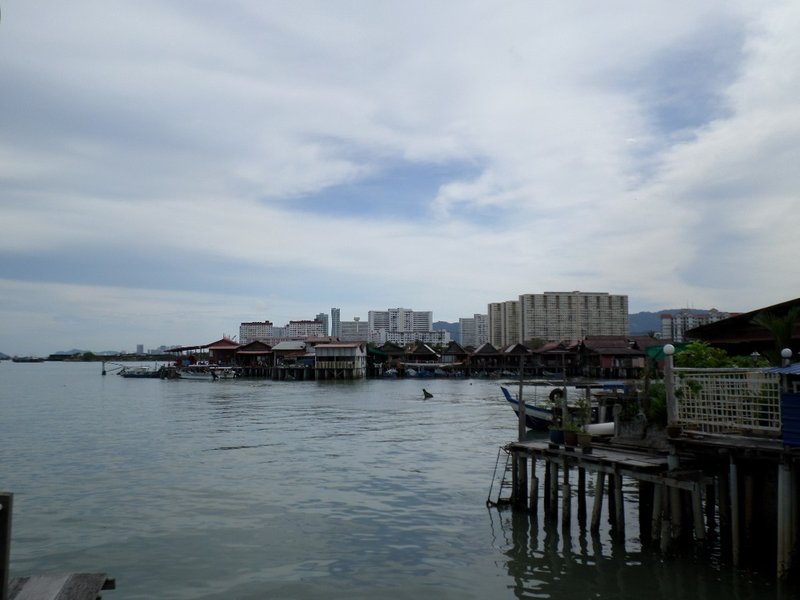 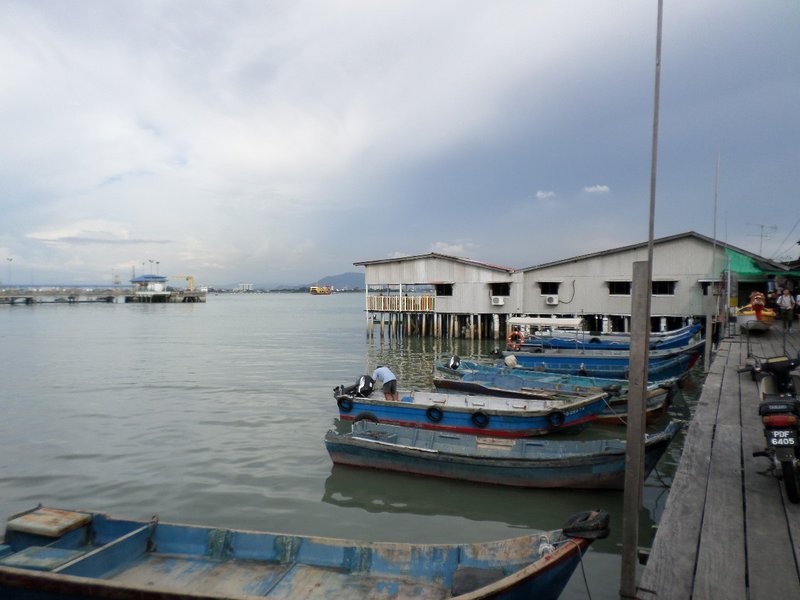 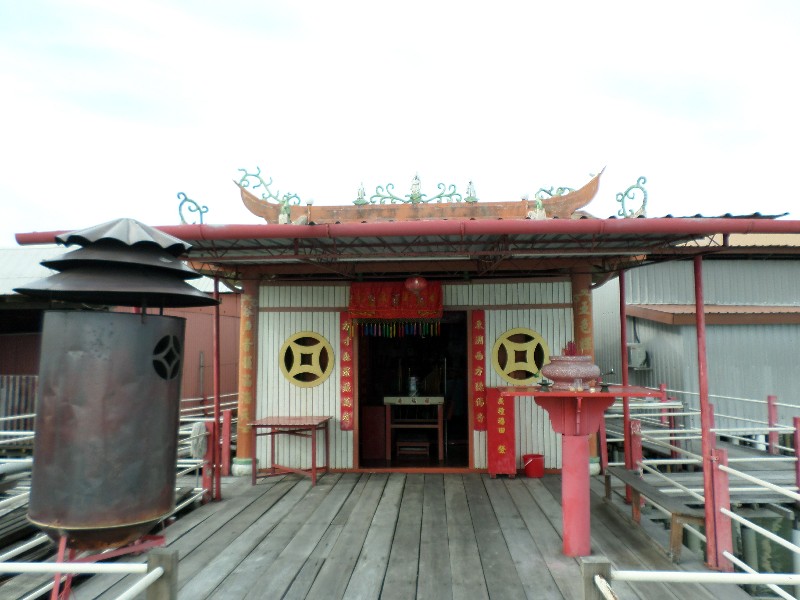 There were even Chinese temples in the villages 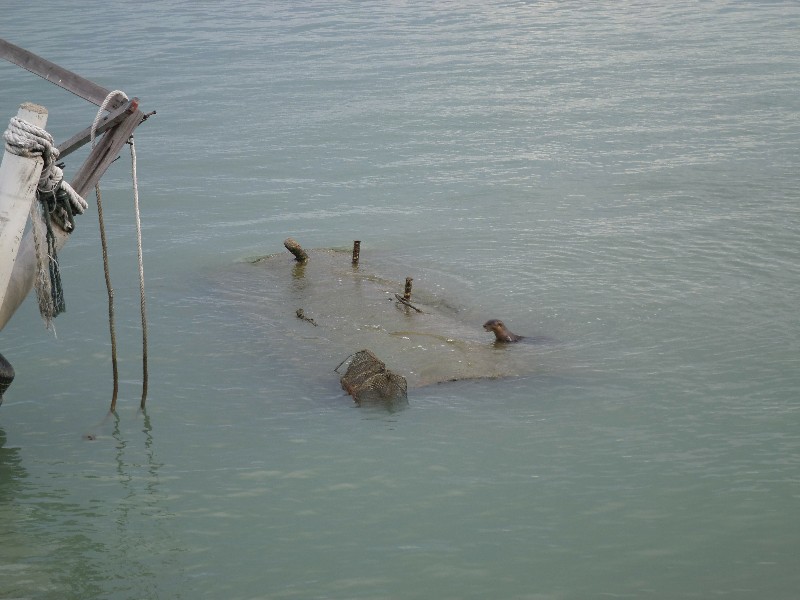 Giant otters playing in the sea 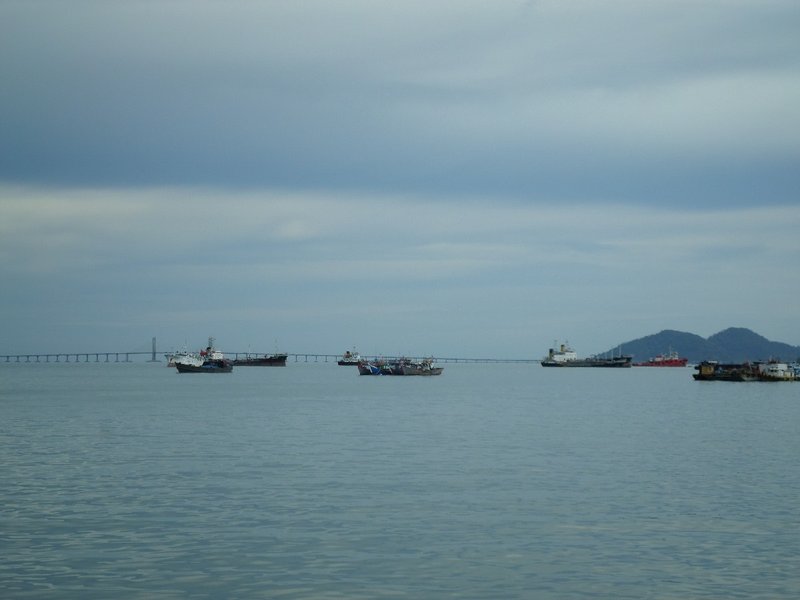 A view of the spectacular bridge connecting the island of Penang to the mainland.

From the clan jetties it was just a short walk to the modern cultural areas of Georgetown to look at the amazing street art. Along my way I was stopped by a group of locals to pose for some photos and they left me with a gift of ‘Langsat’ a small plum-like fruit which had segments and large stones like mangosteens. I had seen and tried them before, but I never knew what they were called until now! 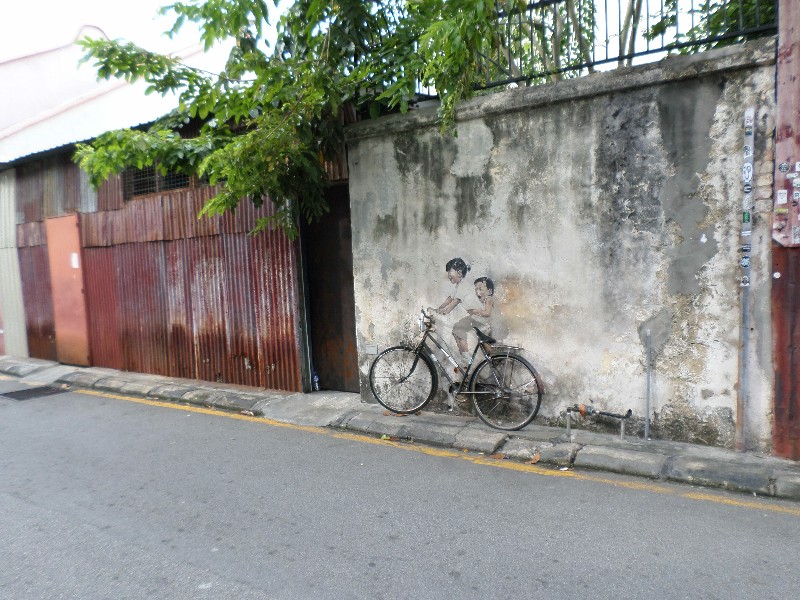 Building on my skills developed on KPG, I decided to rent a scooter! Driving in Georgetown was so crazy compared to the quiet roads of KPG, not to mention the insane number of one-way streets. I drove to the mall to do a spot of retail therapy and fit in with the fashions of Malaysia. On the way there I “accidentally” drove through a police road block which took me by surprise. On instinct I just waved back to the police officer!! I think I could’ve blagged my way out of it anyway! 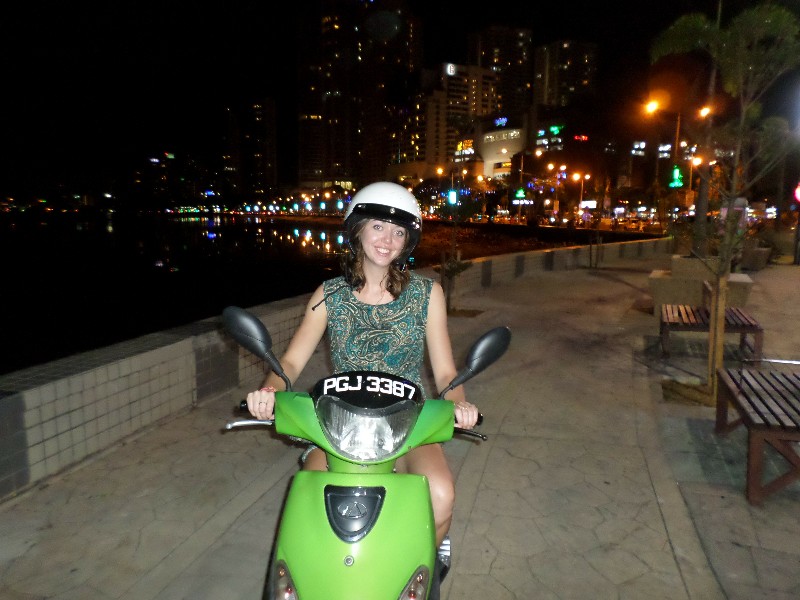 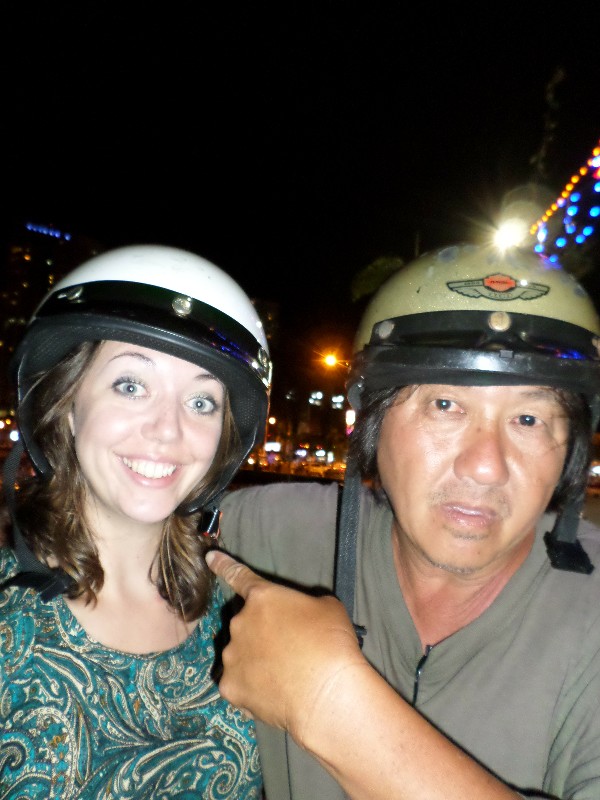 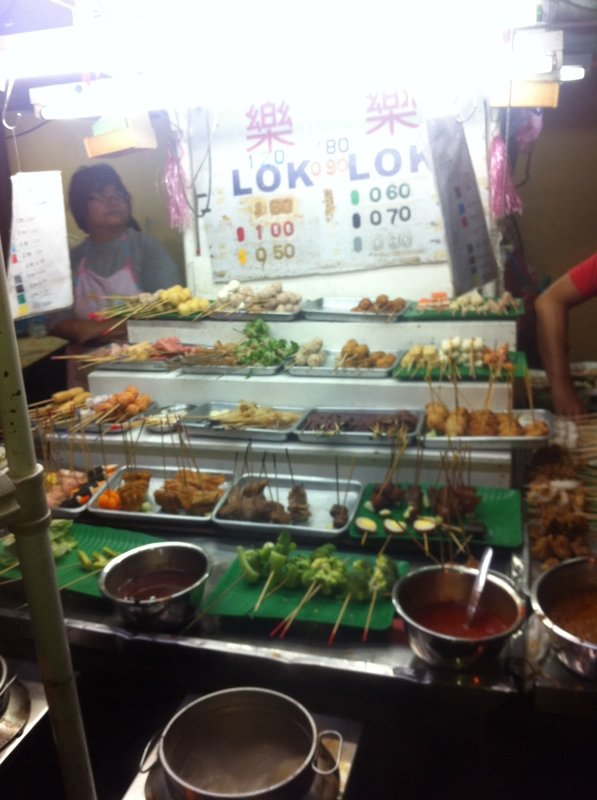 Lok Lok was one of my favourite street stalls in Malaysia; you pick your skewers and cook them at the stall yourself either in frying oil or water baths, you get a paper plate and unlimited spicy peanut sauce. At the end you give the stall owner your empty skewers which are all colour coded based on price. Each skewer was no more than 40p!

The next day the rain was torrential, and so I started with coffee and a cake at a local ‘cat cafe’, where you could cuddle some posh kitties over your coffee! After the rain stopped I took my bike along the coastal road to one of the main beaches on the island; Batu Ferrengi, before continuing on towards the island’s national park. Unfortunately, due to the rain and the fact that I stopped about 20 times along the road to take photos and look at the view, I arrived too late to enter the park… Not like me at all…!! 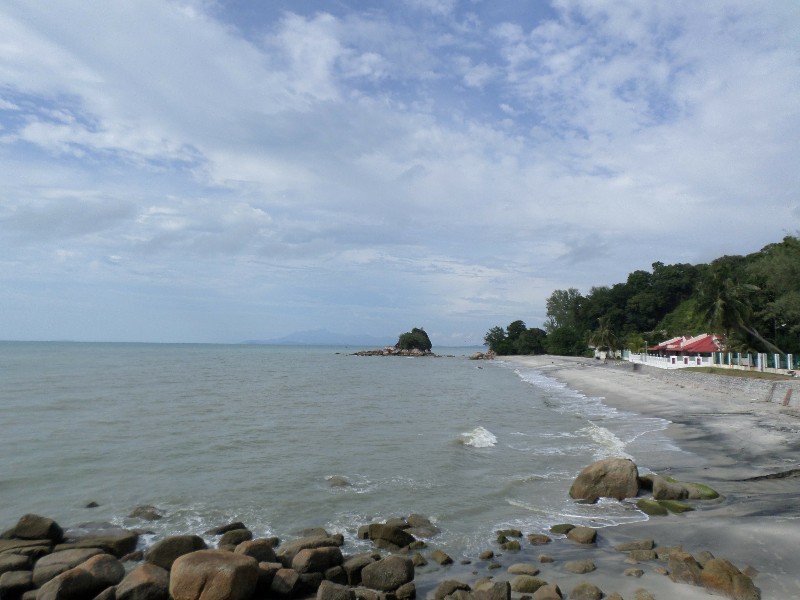 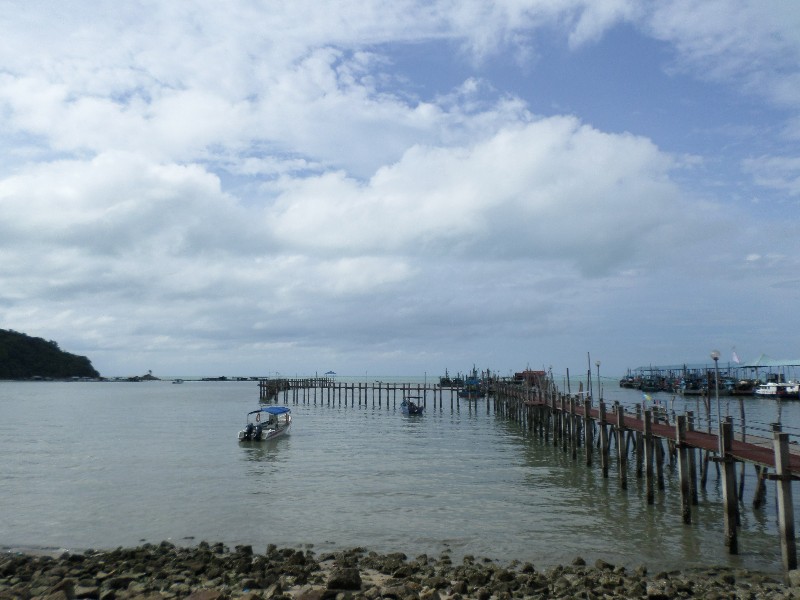 Jetty at the national park

That evening after searching the internet for a high rated restaurant; Ivy Nonya House. I treated myself to the first of many beef rendangs (probably the most expensive meal of my trip so far, the meal cost me all of £8!). The rendang was fantastic and set the bar very high for all future rendangs! 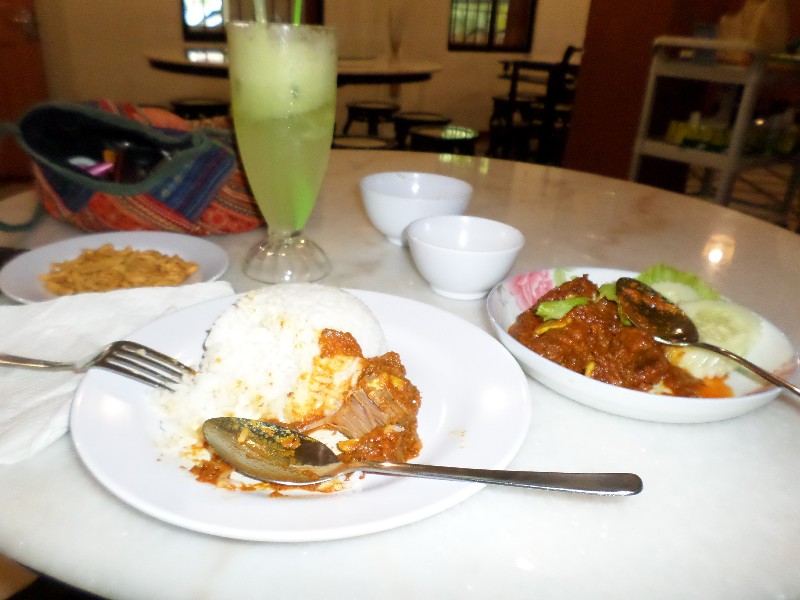 My final day in Georgetown I drove my bike through some of the local residential areas towards Penang Hill and the botanical gardens. The freedom of driving wherever you want on a scooter was just incredible and allowed for a more natural way to sightsee and discover the city. The buildings in the suburbs of Georgetown were very bizarre, like the concrete tower blocks from the 70’s, built so high in concrete painted white the mould and staining on the buildings made them look awful, but the people living in this areas are what made it beautiful to explore. From the road I saw an amazing looking building partially up the hill and so headed towards it just from sight… As I climbed the hill up towards it I found that it was a huge Buddhist temple complex; Ke Lok Si, which was well kept and had great views out over the city. 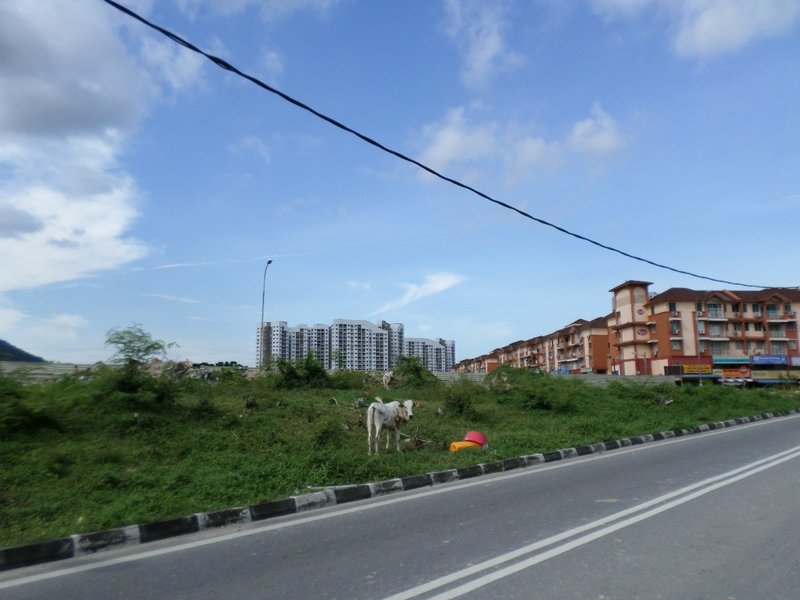 A cow just chilling out at the side of a busy main road! 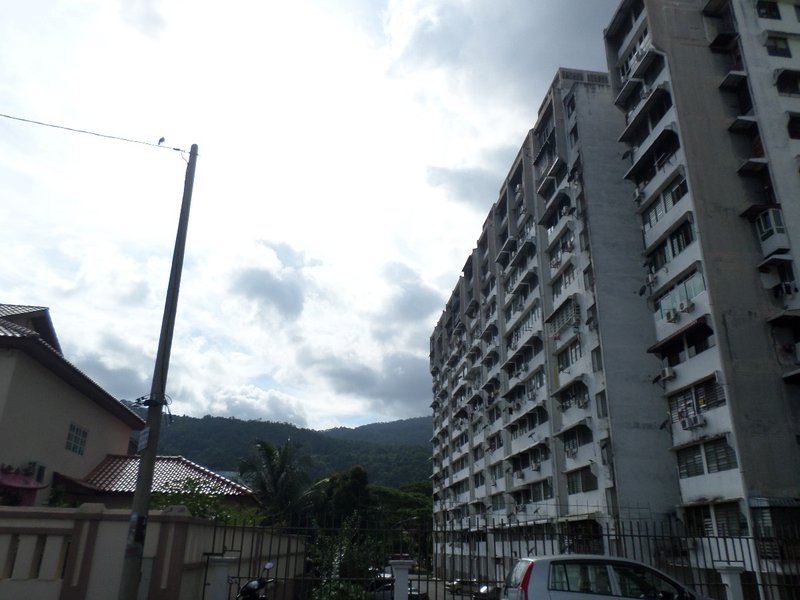 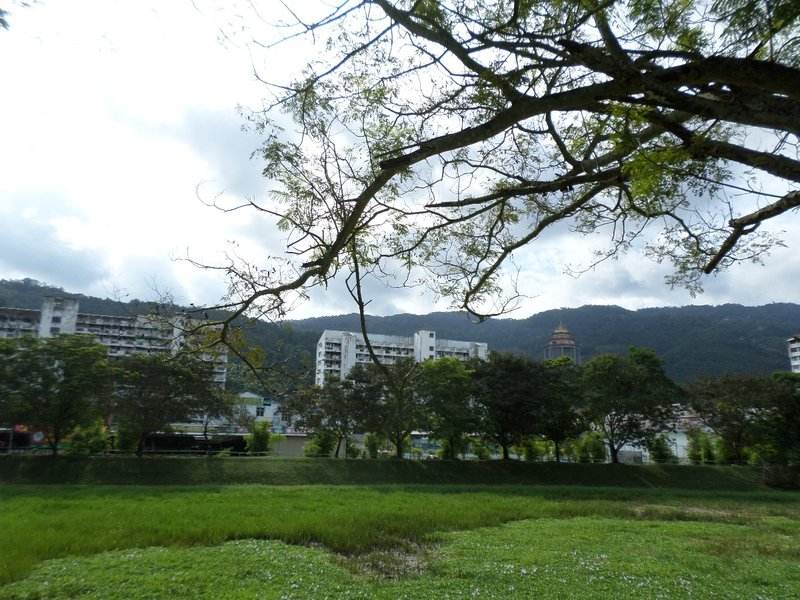 Spotting the temple through the trees 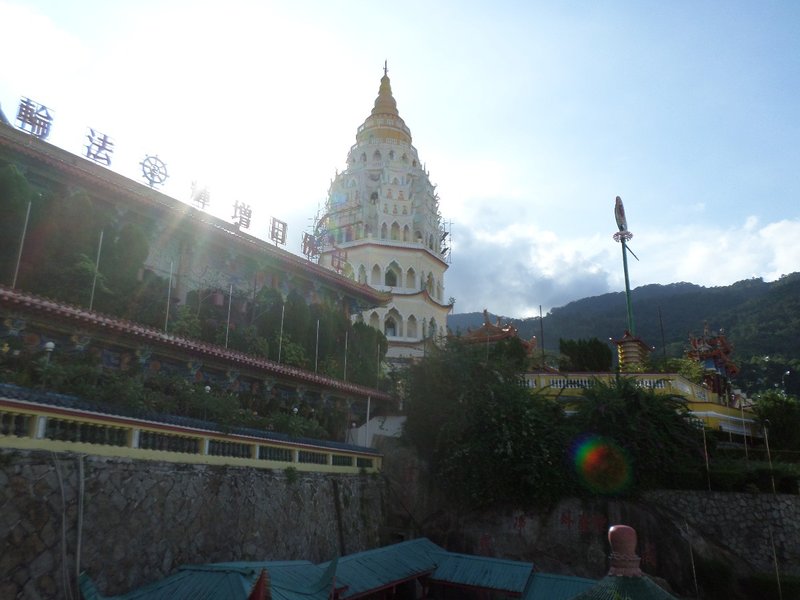 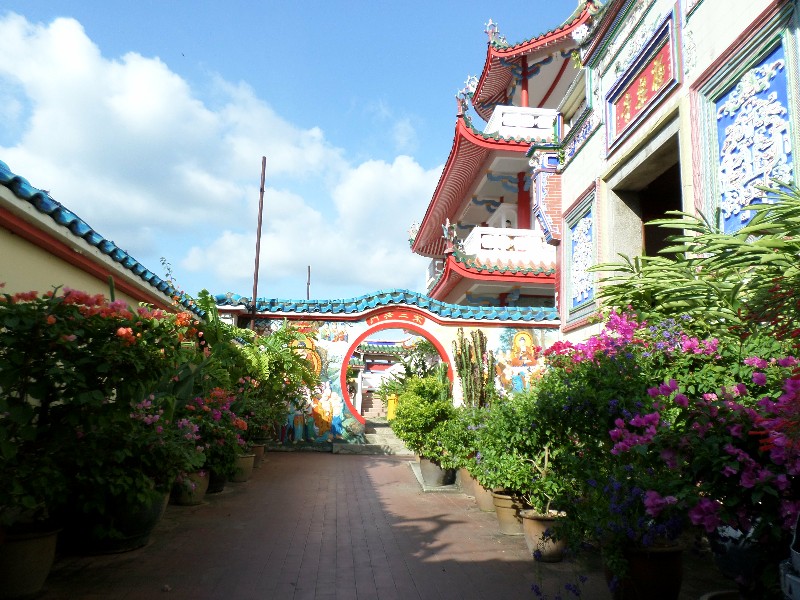 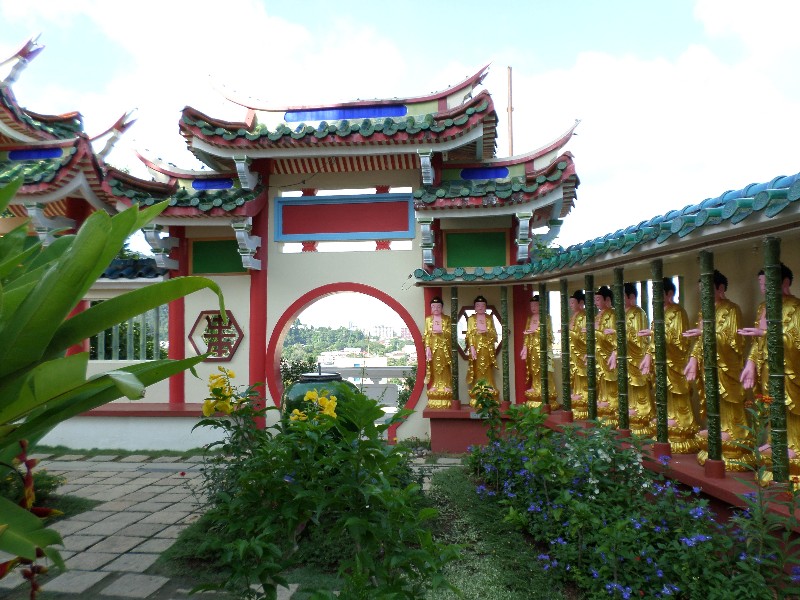 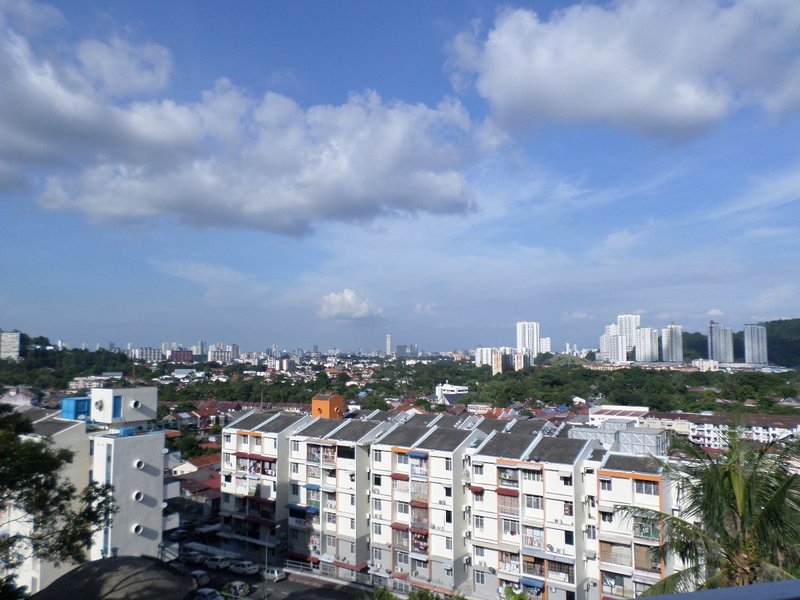 The road appeared to continue on past the temple and there was some kind of cycling race going up there, so I decided to inspect further… Passing tired cyclists pushing themselves as hard as they could up the steep incline on a motorised scooter shouldn’t have been fun, but every single person had a massive smile on their face and said ‘Hi’ to me as I passed. The road got very steep at one point, but then ended at a beautiful reservoir with an even better view point of the city… I relaxed here for a few minutes but left after I started to attract a lot of attention from the finished cyclists who all wanted photos with me! 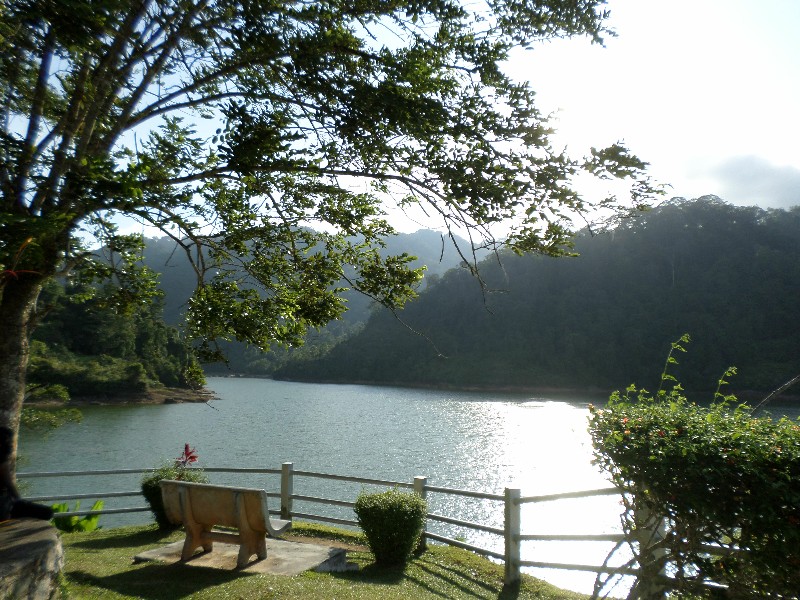 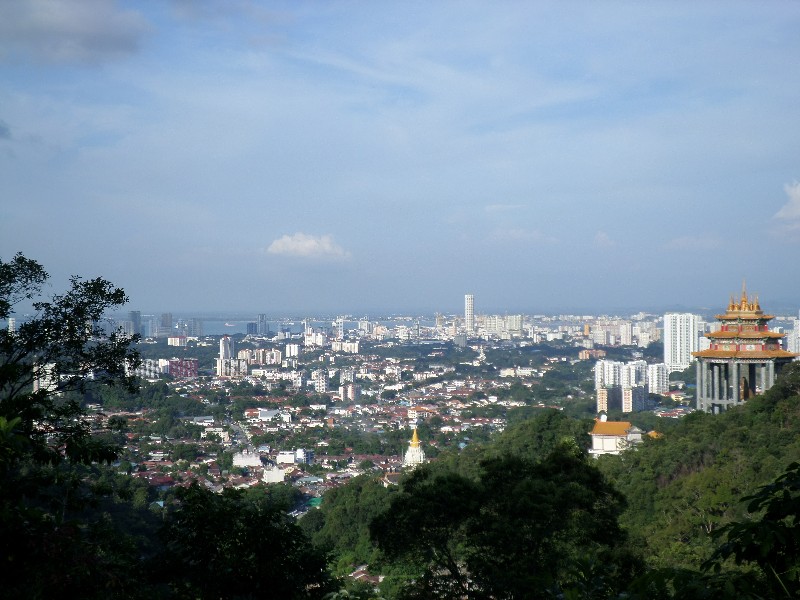 For my evening meal I once again decided to splash out and went to another high rated restaurant I found online; ‘Mama’s Nonya House’. I sat at a table by myself, but before I had finished looking at the menu I was invited to join a table of 3 Malaysian business people on a business meal, one lady from Georgetown and two guys from KL. They were surprised to see me travelling alone and asked me many questions about where I had been and what had led me there. After the small inquisition the conversation turned casual, and we ordered multiple dishes off the menu to share, one of which was lemon fish head soup, which I did try but was pretty horrific! The group were really lovely, honest people, who were just genuinely interested in getting to know a foreign tourist. There was no scam, no trying to rip me off, no ulterior motive at all… in fact, they wouldn’t let me pay my share at the end, for which I was very grateful. Unfortunately, my camera battery had not lasted the day, as it would be lovely to have a photo memory of this meal.

This was the second meal that I had paid for me in 3 days in Malaysia, and I was going to find that it would by-no-means be the last…. the relationship of the Malaysian people with tourists was so so different compared to what I had experienced in Vietnam or Cambodia for example. I was not being exploited, I paid the same as any Malaysian person, people seemed to be honest and but curious… I assumed that this was due to the wealth of the country, but I guess I would see as my travels continued…

That night Claire from Clockwise and I went for a few drinks at the local reggae bar, where there was live music of a mixed duo. Their singing almost brought us close to tears on several occasions! After this we headed to a skybar across town and had some swanky cocktails with another great view out over the city! 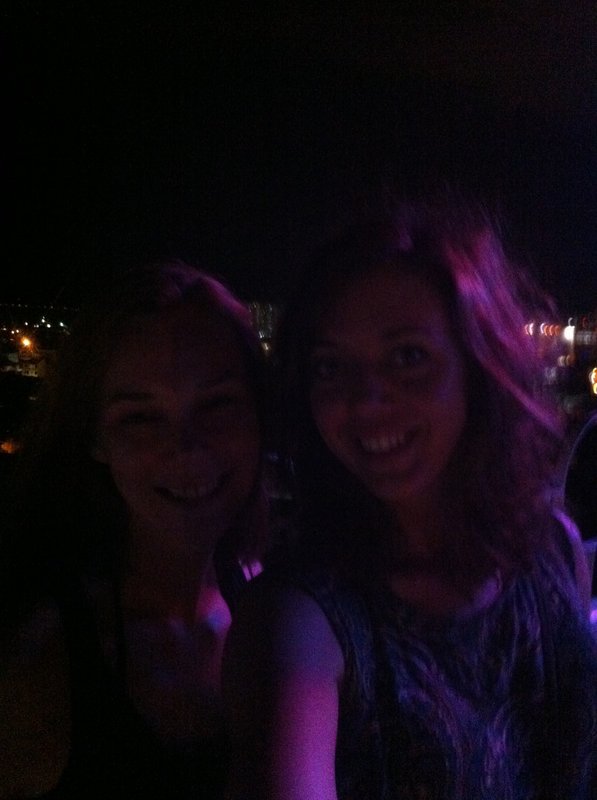 I loved Georgetown, not only was the city full of art and culture, but also some cool bars and amazing food. But by far the best experience of Malaysia so far was the interactions I had had with the local people, It was a great first impression of Malaysia!