From Mandalay we took the tourist bus to Hsipaw, a village in the north with great access to the minority mountain people of Myanmar such as Shan, Karen and Palaung people. We arrived late in the evening and booked a trekking tour through the hostel to a Palaung village.

The trek started at 6am the next day, through the village of Hsipaw, then through rice paddies, maize fields and tea plantations. The incline was shallow to start with, but then we started going up… the views got better, but the sun got hotter and it became so humid we were all dripping with sweat! 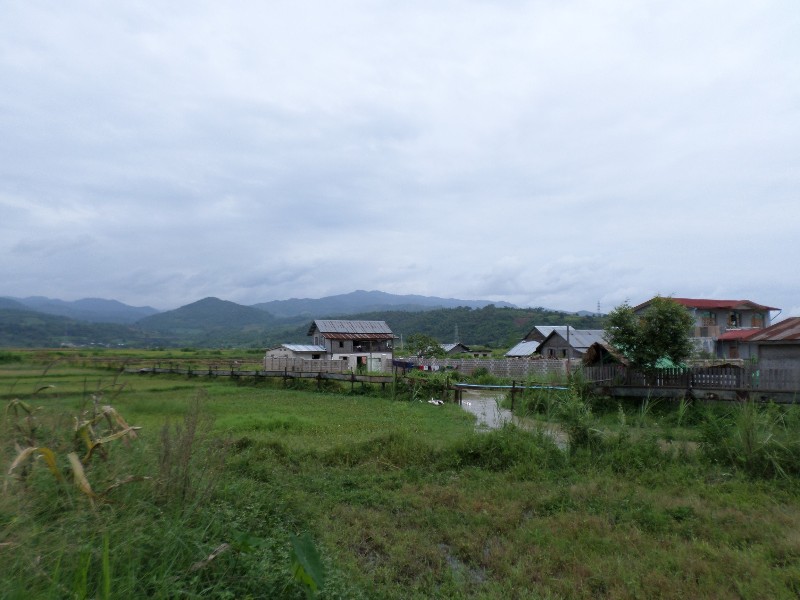 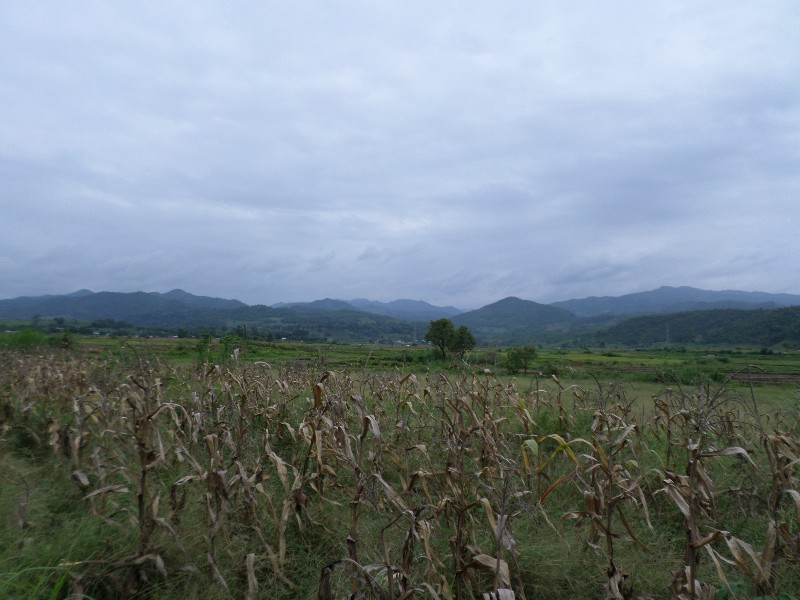 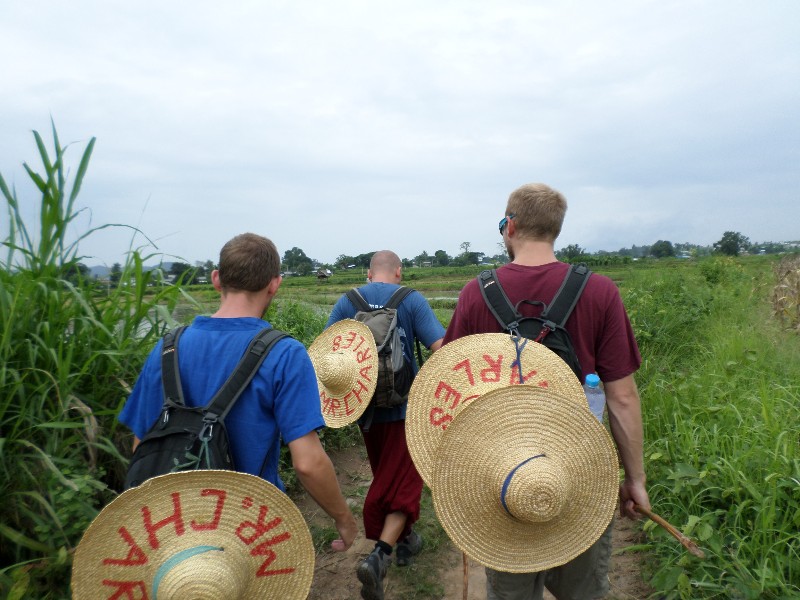 Broad rim hats protected from the midday sun which was so hot. 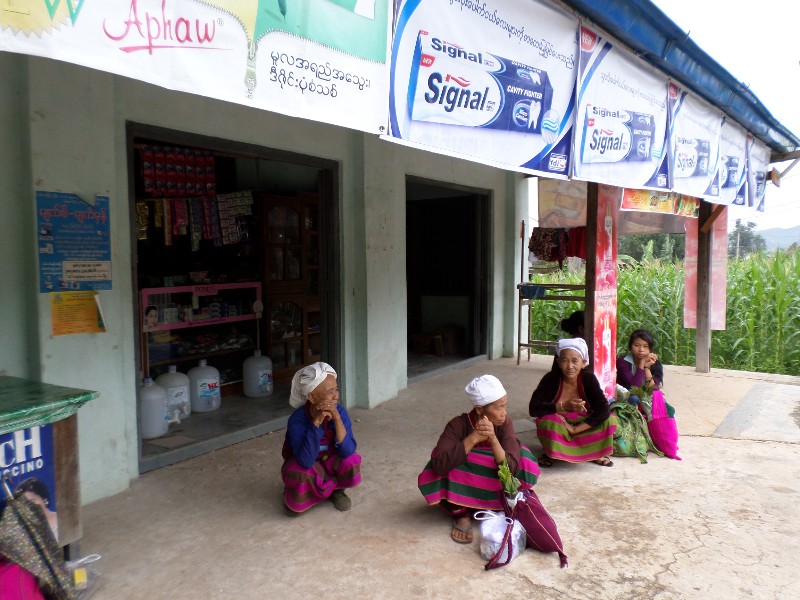 Local Shan women chilling outside the shop! You see Asian people sitting like this a lot… I find this position so uncomfortable, but they can sit for hours like this. 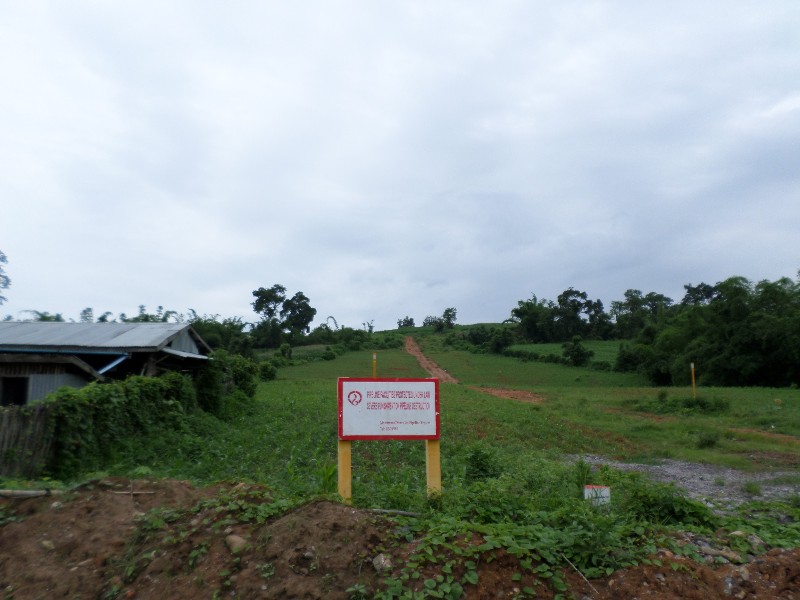 Our guide was quick to tell us about ‘the Chinese’ who apparently steal all of Myanmar’s resources, such as these pipes being built to transport gas and oil 400km into China… the local people who own the land where the gas is taken from see no money, instead, the government receives everything…
Further along the trail we saw hardwood and rubber plantations, with all the harvests again going to China… 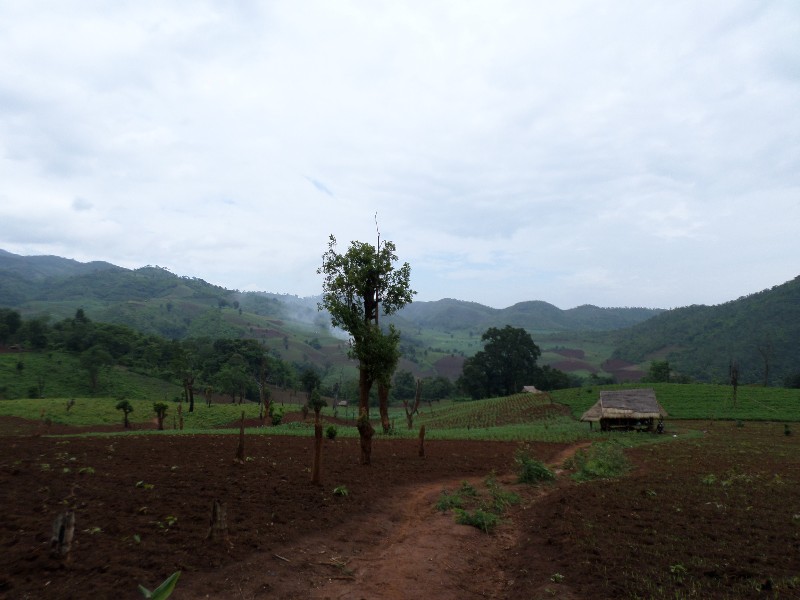 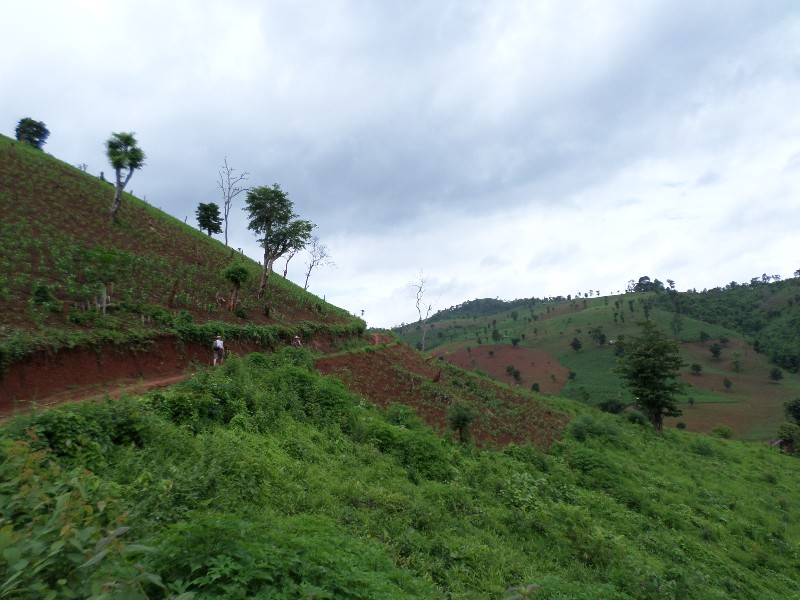 It wasn’t quite a walk in the park… 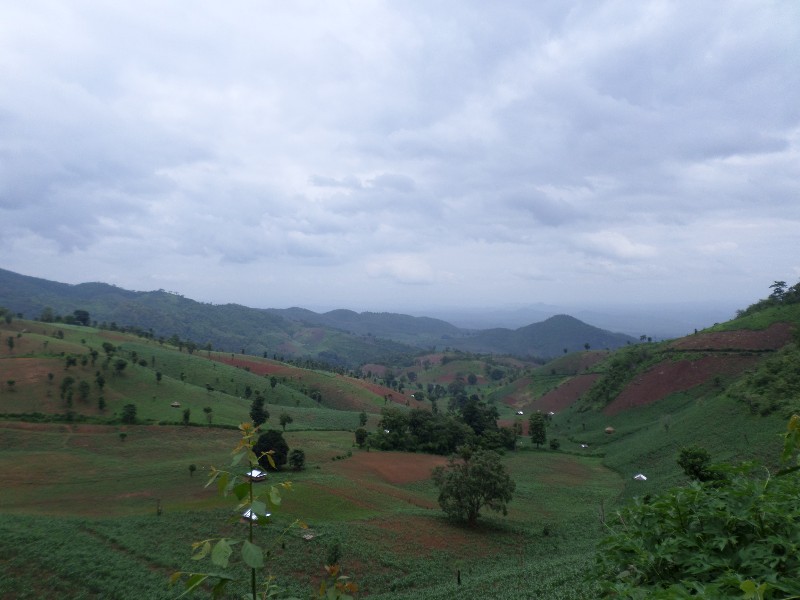 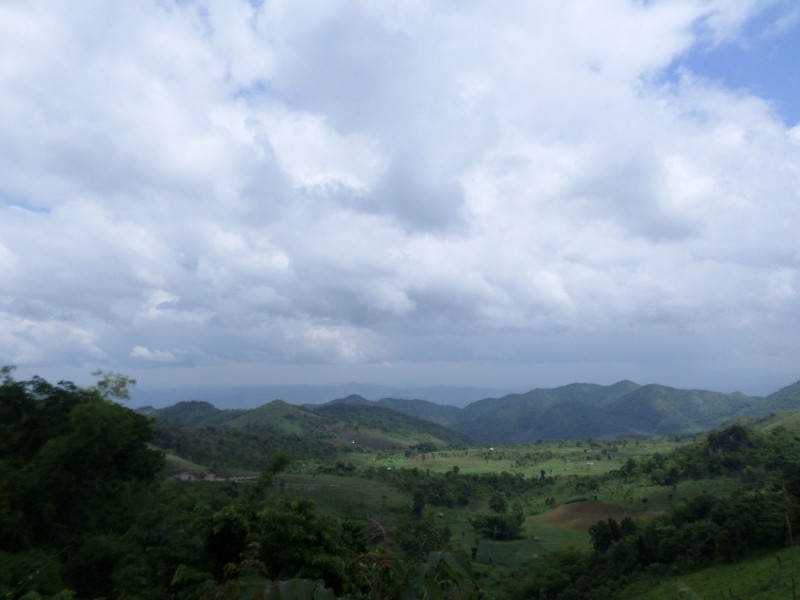 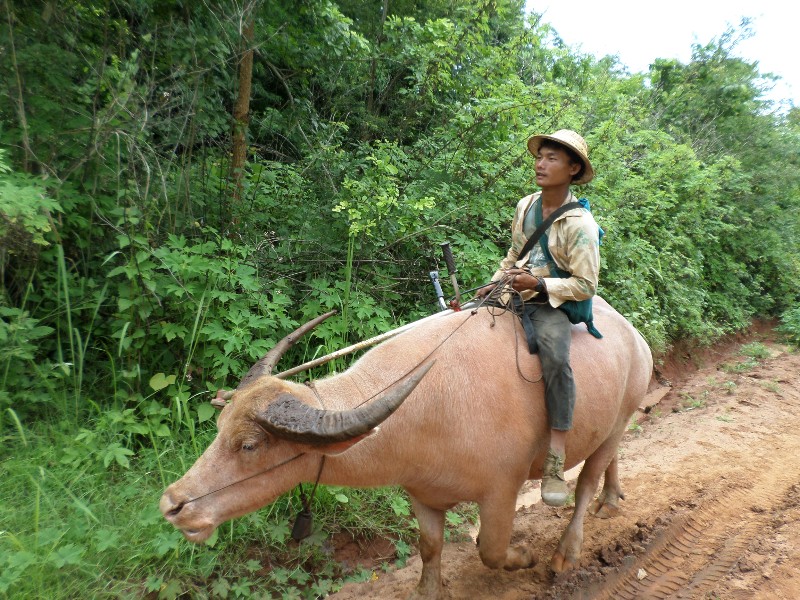 We finally made the top and our village destination… 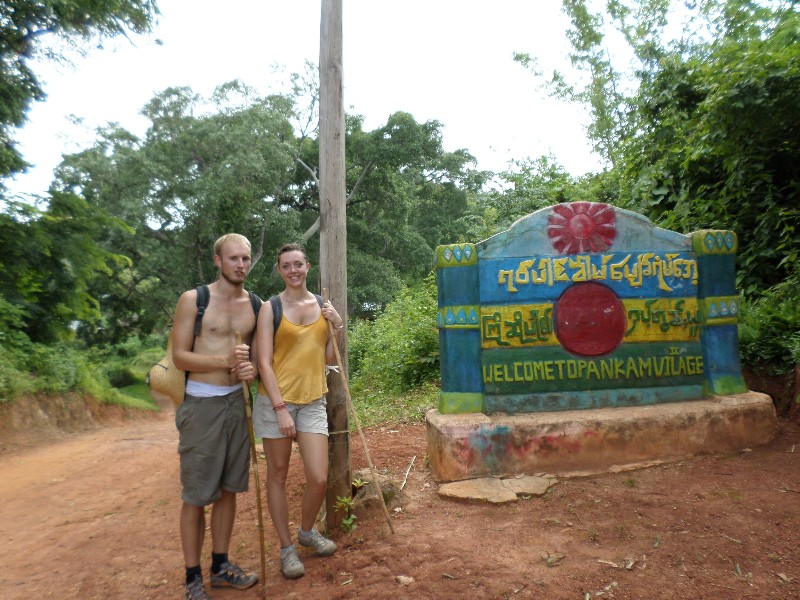 The village was beautiful, each house unique and set into the mountainside on stilts or in the valley. Houses had some personal vegetables and herbs, but most of what the village grows is shared, such as major vegetables, the tea plantations where they work and the rice paddies. 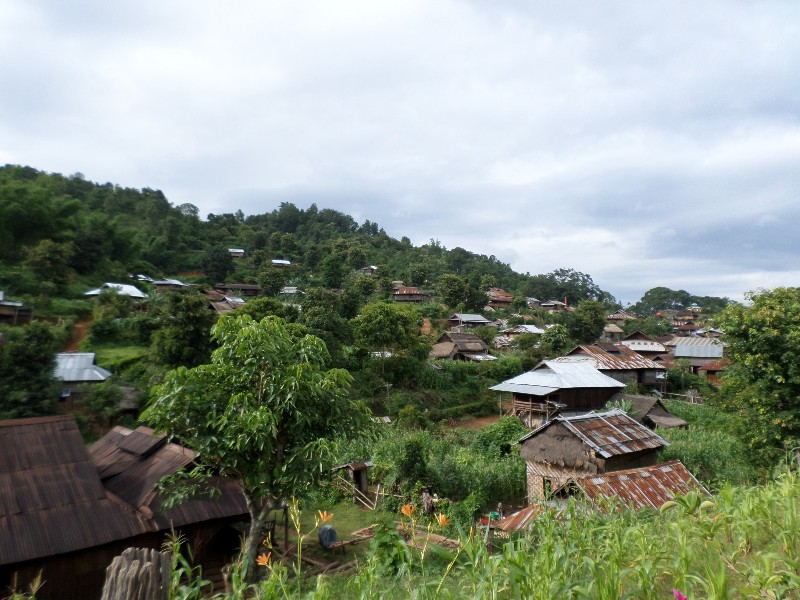 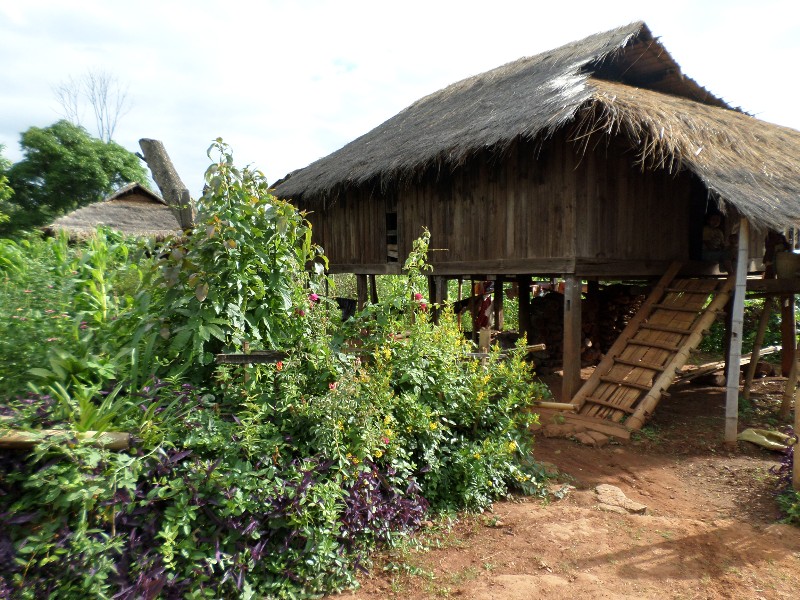 This house had a private garden, but were happy to share! 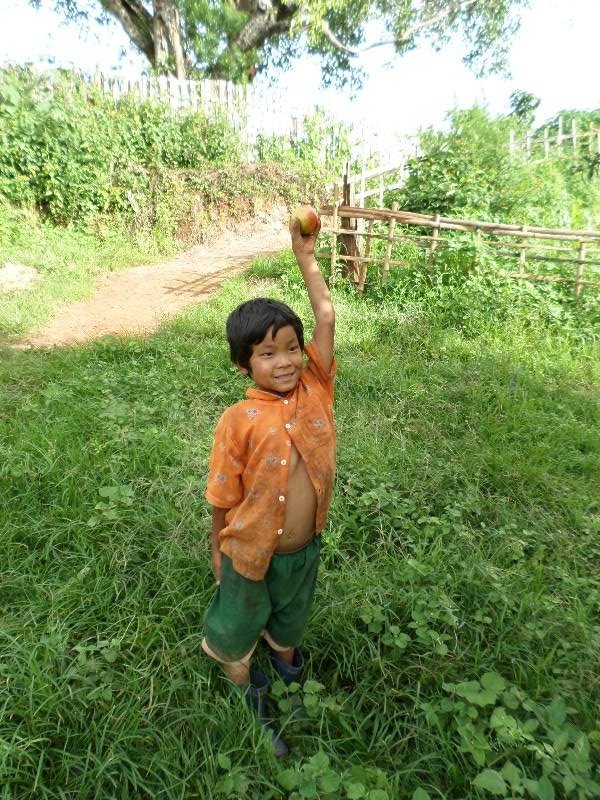 Steve helped this boy pick his Apple by lifting him up above his head, he thought Steve was a giant or something and was delighted to finally reach a branch… I just wished I could’ve got my camera out faster to capture it!

Our hosts cooked us a delicious traditional meal and offered us rice wine. There was going to be a big festival that night in the village, where people from neighbouring villages came to worship in the Buddhist temple. My face was painted with Thanaka; derived from tree bark and used as a natural sunscreen but also as decoration. And I must not have looked smart enough as she also gave me one of her sparkling bright t-shirts to wear!! 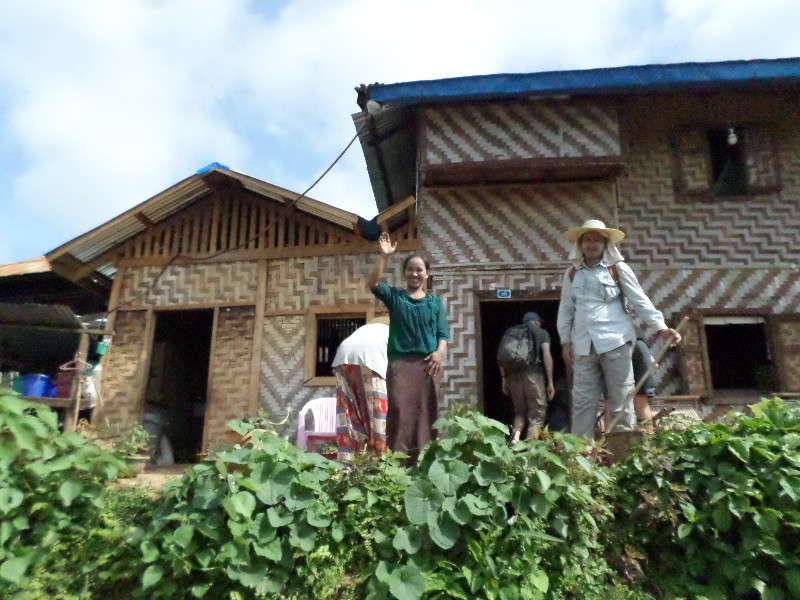 Our hosts in the village. 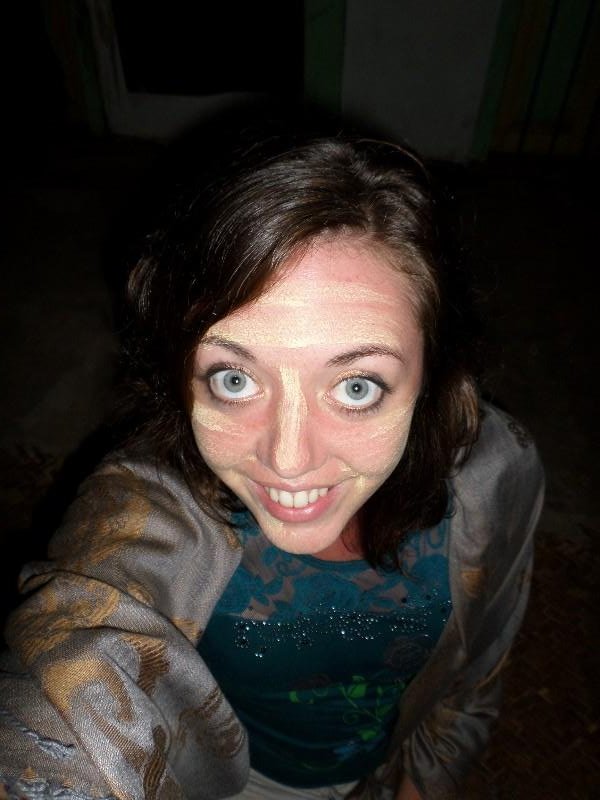 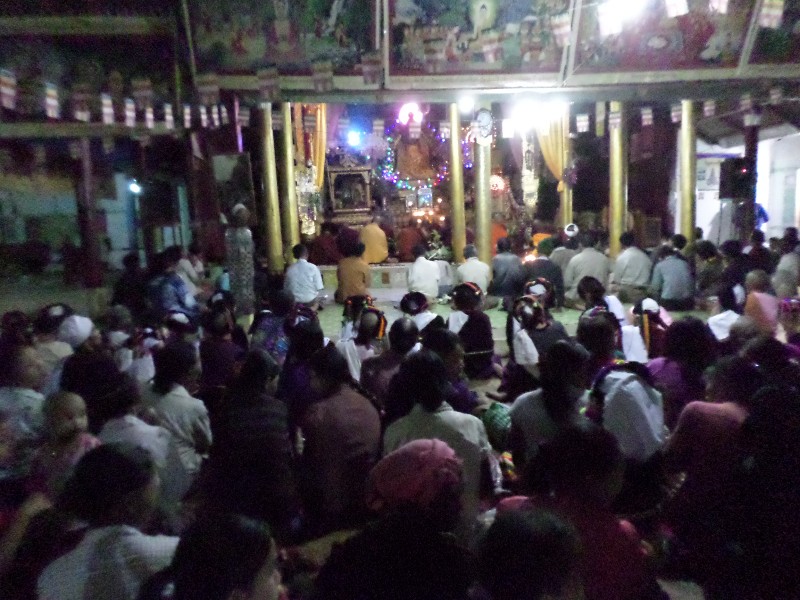 We stayed over night in the village and the party went on late into the night, but unfortunately I got a pretty bad migraine so went to bed early and missed most of the celebrations

The next morning we headed out after breakfast back down the mountain to Hsipaw.

Although the trekking was difficult, I did enjoy it, mainly the company and our tour guide, he was very funny (and extremely racist towards Chinese, mainly racist jokes!!). The village was beautiful and I was pretty sad that I felt too ill to enjoy the celebrations properly. Arriving back in Hsipaw we all had big blisters and sore feet and aching legs, so I think it was enough exercise for a week at least!!