We left Kampot for Sihanoukville mid morning and immediately caught a boat to the small island Koh Rong. 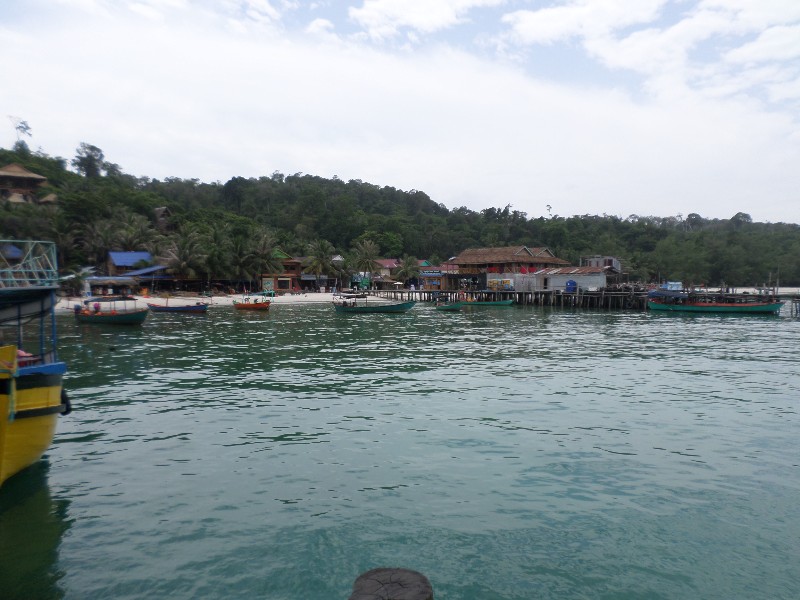 We checked into our beach accommodation, which was $10 a night for a private room with a double bed! We all got a room each at that price! 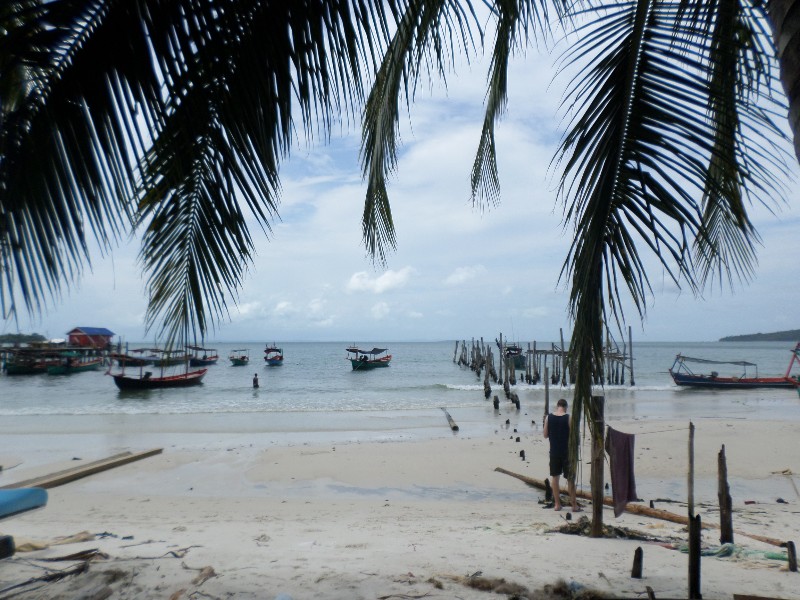 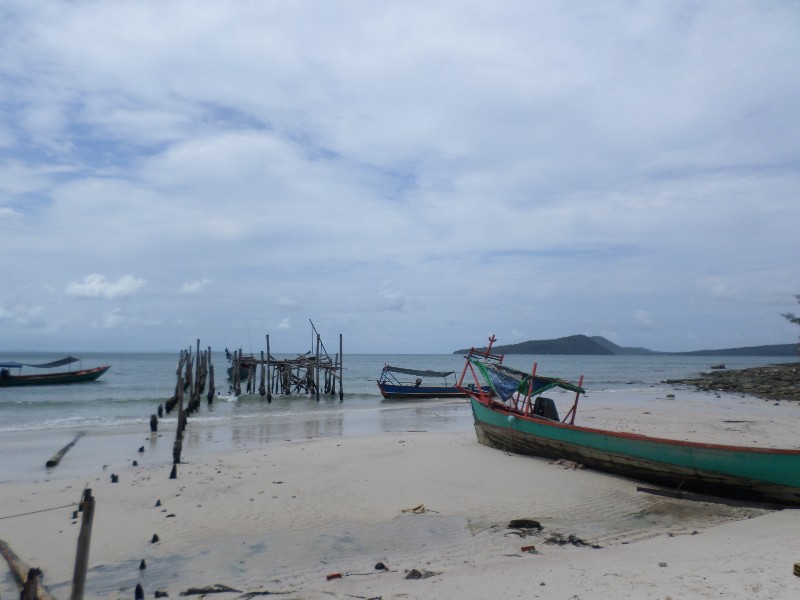 The view from the guest house

The first night we met the guys at a cute little cafe which made the best quesadillas I’ve ever had with tiny kittens running about that just wanted cuddles! At one point I had 4 kittens fighting for the prime position on my lap! We came here everyday… 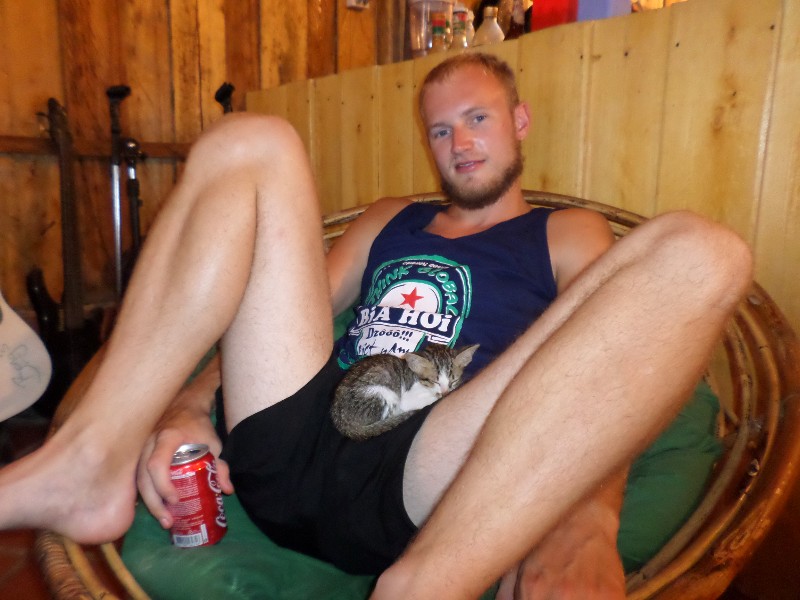 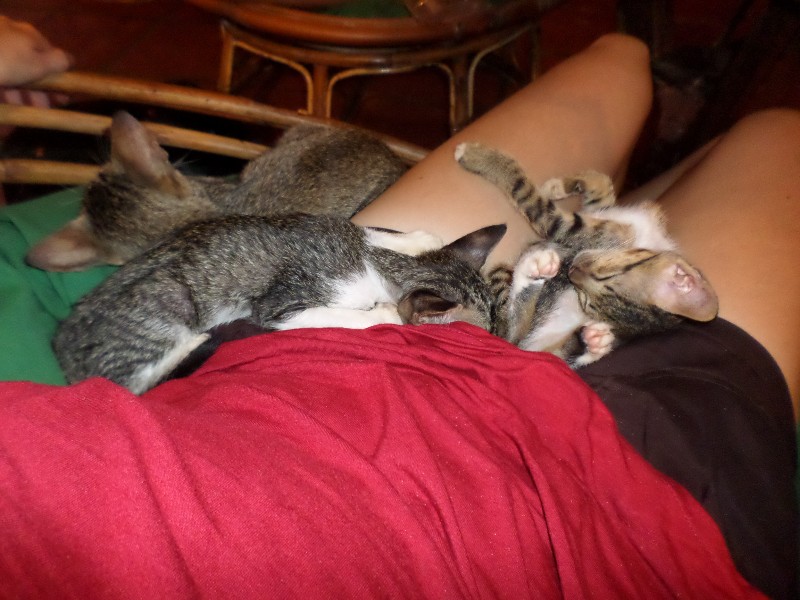 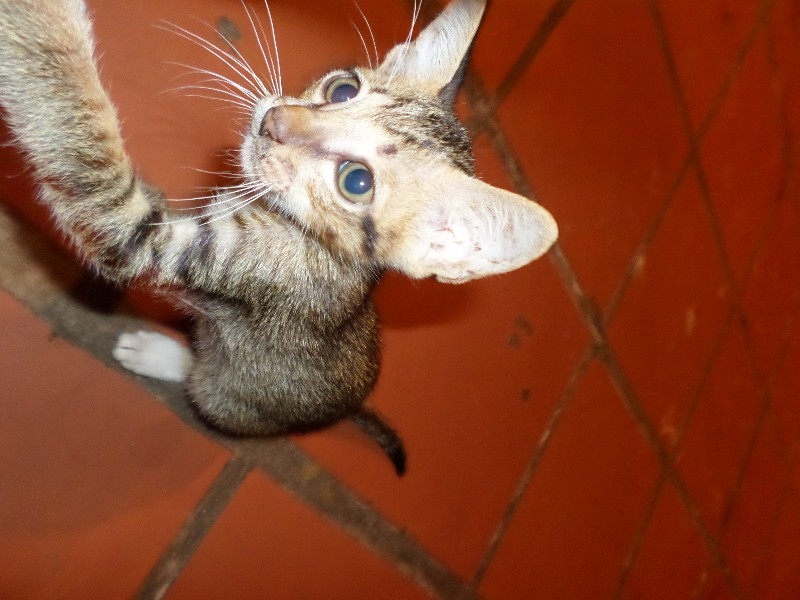 I chilled on the beach that night with Steve, Paul, Steffi, George, Karen and Marc, and we watched the world cup and had too many drinks!

The next day the group of us (minus Karen as she felt very ill) went on a boat trip fishing and snorkelling. I got really sea sick, which is usual for me, but perhaps due to the night before! The visibility for snorkelling wasn’t great, but we managed to catch a lot of fish (I didn’t catch any!! No matter how hard I tried!!) which was good because we cooked and ate all the fish we caught! 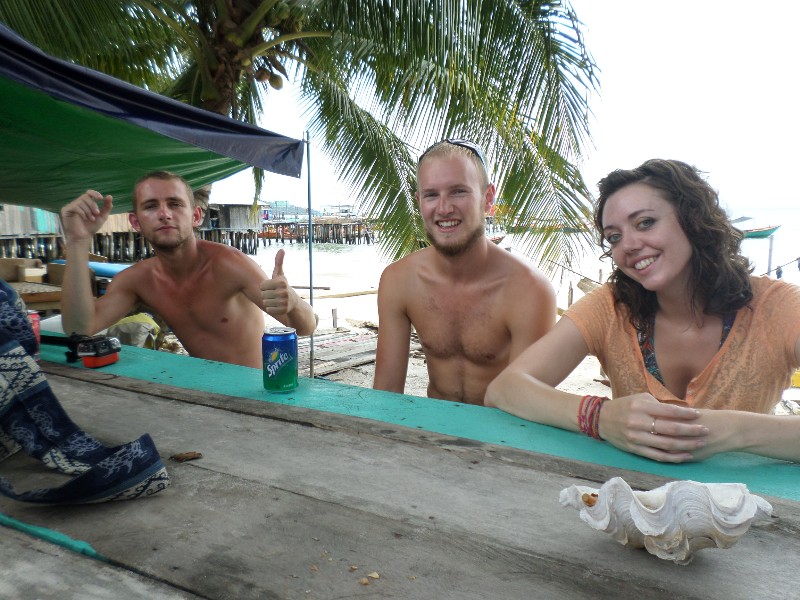 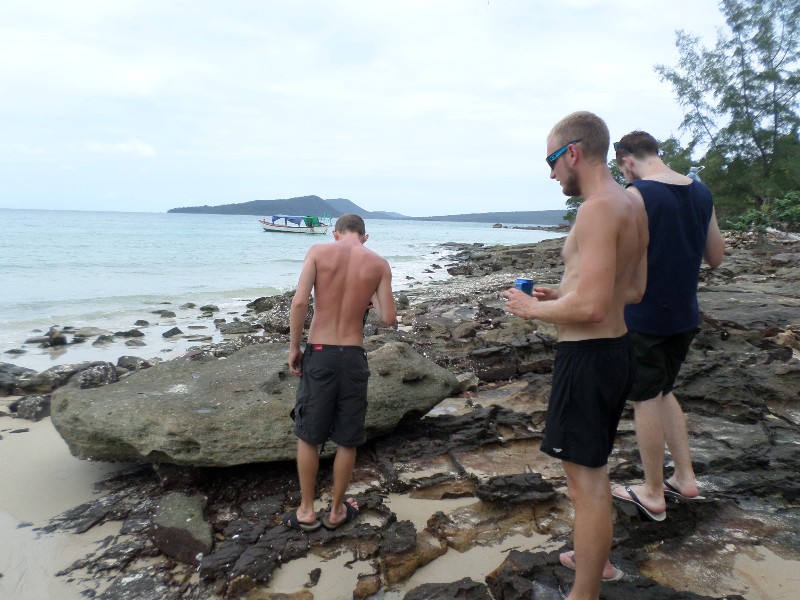 Waiting for the boat 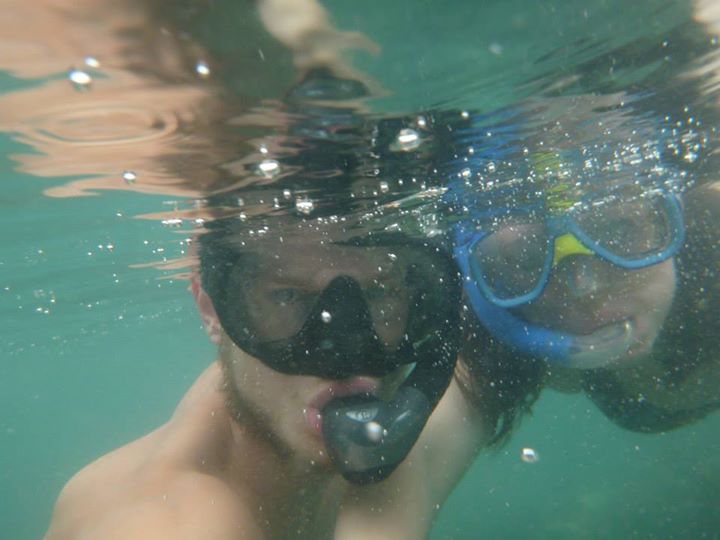 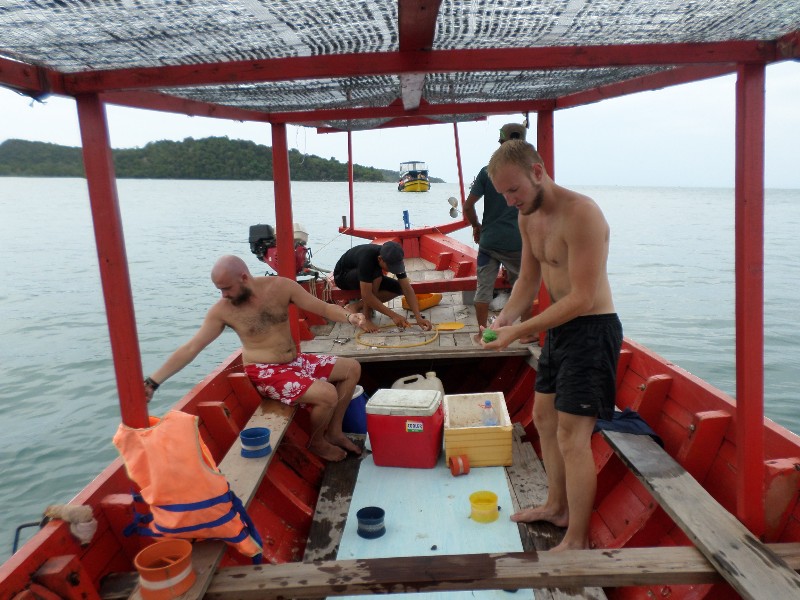 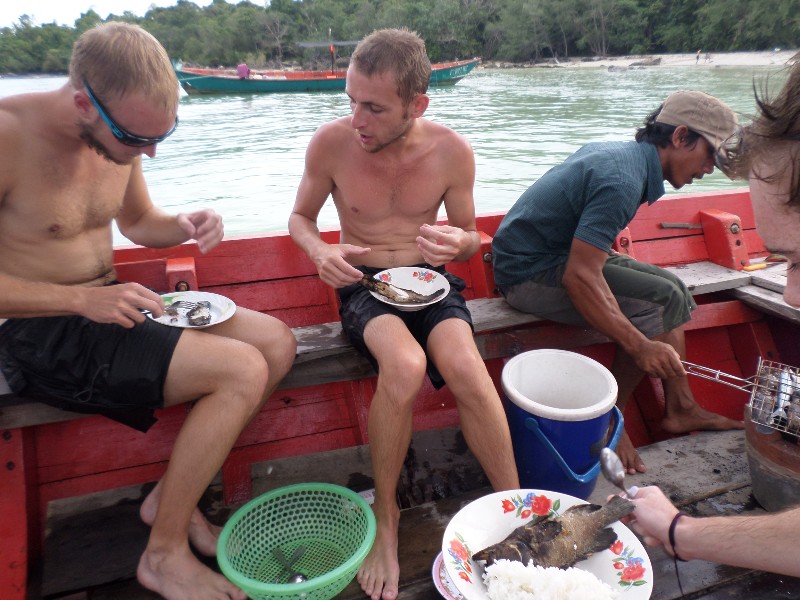 We watched the sun set from the boat, then returned to shore where we waited until dark before wading out off the beach to about waist deep to watch bioluminescent plankton which truly was incredible. The plankton responded to movement, so we were thrashing about in the water making it glow. And when you removed your arms/hands from the water you could see them in little dots on your skin… fascinating!

The next day George and I walked up and over the interior of the island (which had no roads) to the opposite side of the island; long beach. The walk through the jungle was very hot and humid, and at some points required clambering over rocks clinging onto ropes and vines. 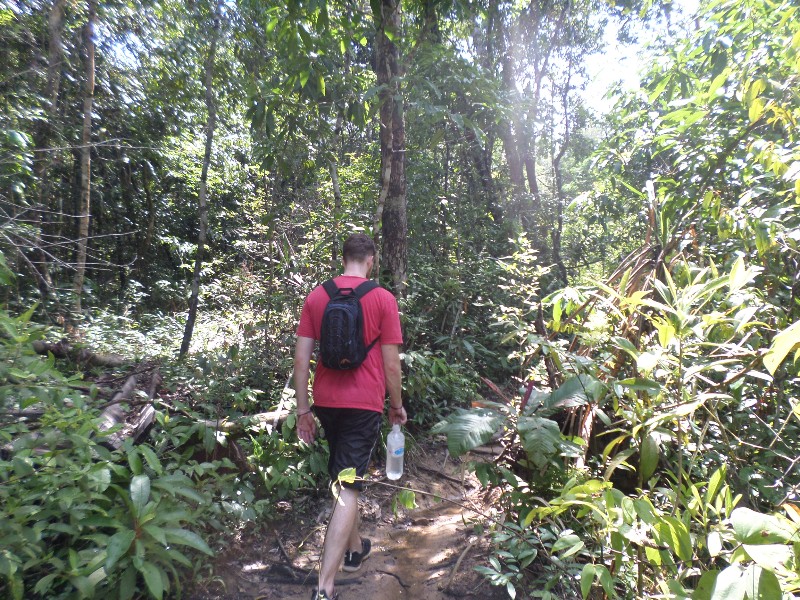 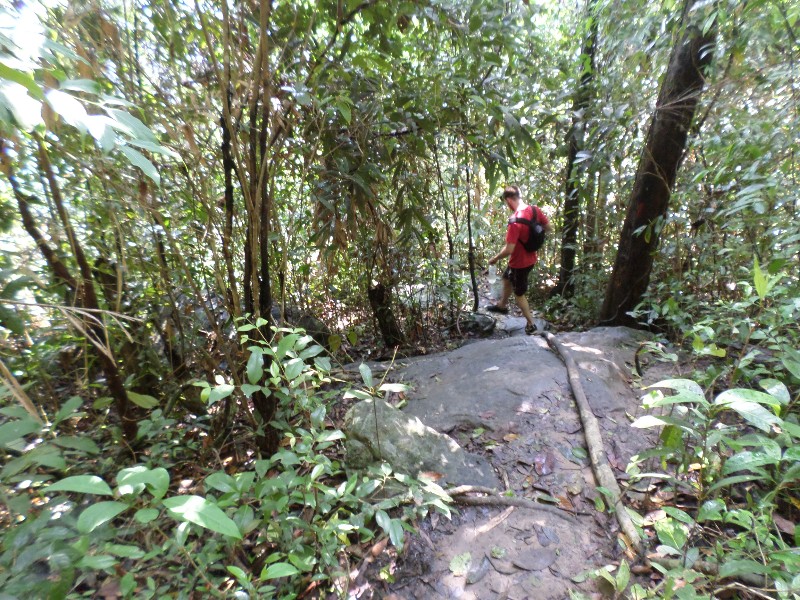 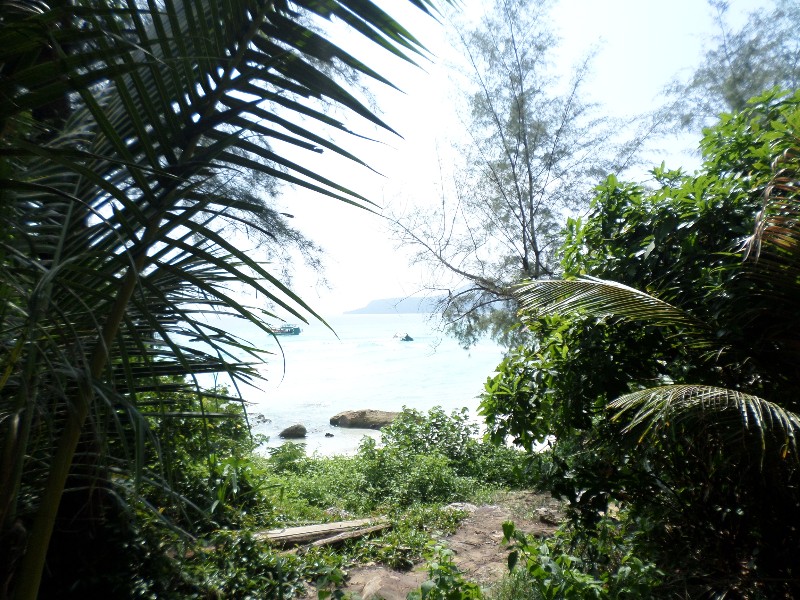 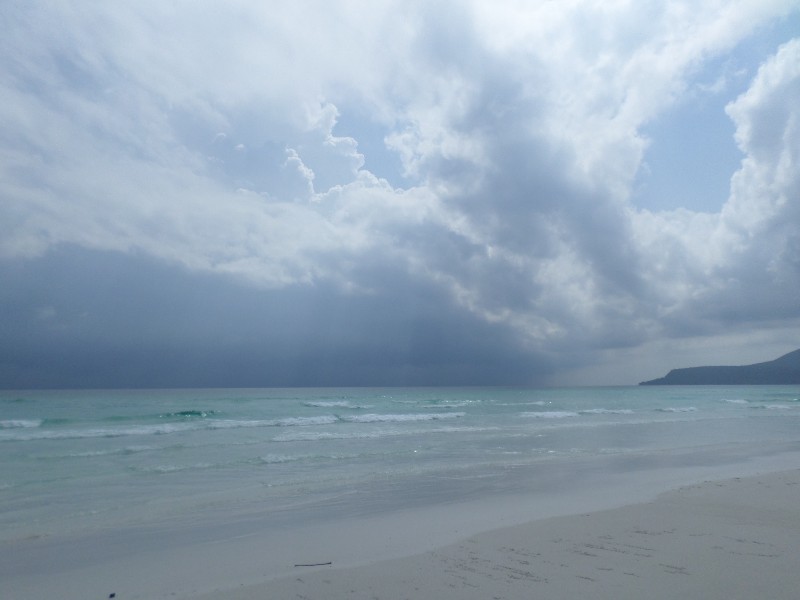 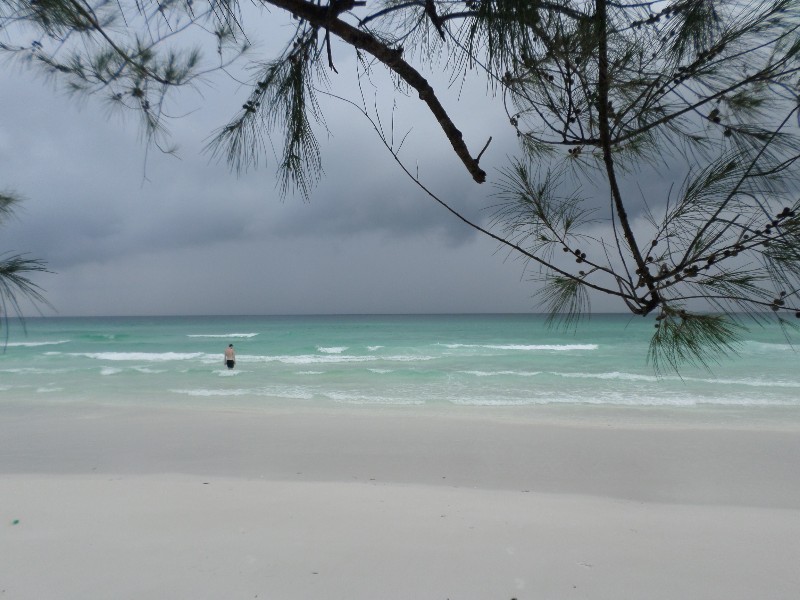 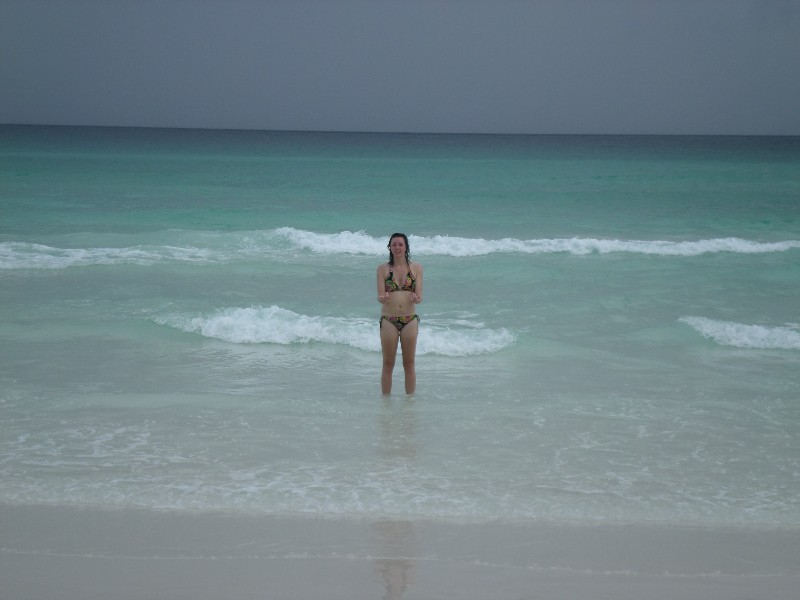 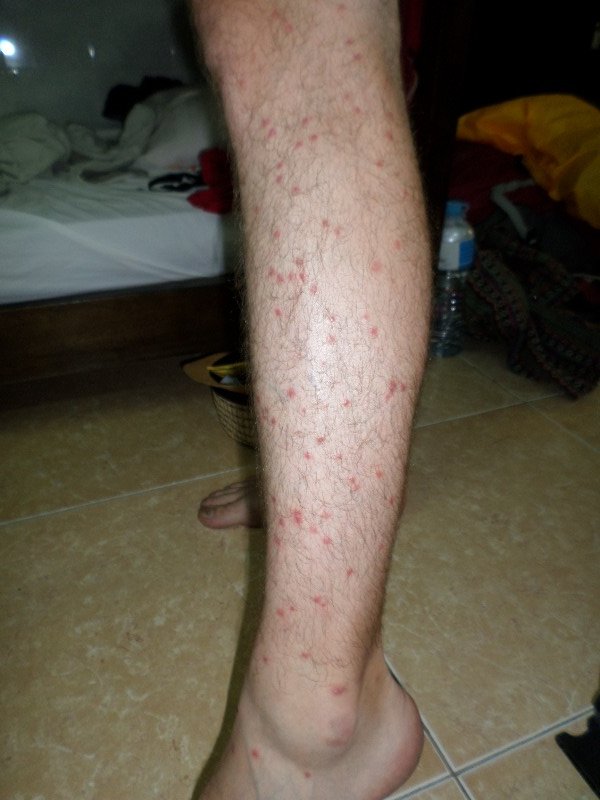 We decided to take a local boat taxi back to the main village and spent that evening with Karen, Steffi and Marc, eating BBQ and playing beer pong! In the bar that night I met Wilf and Dave again! Still a small world….

We arranged to travel now as a large group of myself, Karen, George, Steve, Paul and Steffi, and we headed from Koh Rong to the capital; Phnom Penh.

I loved koh rong… it was remote and still undeveloped with a quiet atmosphere, but it still had some modern/western bars and cafes which was a nice comfort for a few days. The island was beautiful, especially long beach, but I couldn’t help notice a high amount of rubbish (especially plastics) on the beaches, I didn’t know if it was left by tourists or washed ashore. But still, it was a shame. The plankton off shore really did capture me though, I have since heard that this exists off the coast of Norfolk in UK too!!