The evening after Ninh Binh I caught an overnight bus to Dong Hoi, where I was met by a taxi pick up I had arranged through Easy Tiger hostel in Phong Nha national park. Phong Nha is home to the largest cave in the world, but the entrance to that cave is only for scientists and 300 tourists per year and costs $3000! However, the national park is littered with caves and had beautiful scenery. 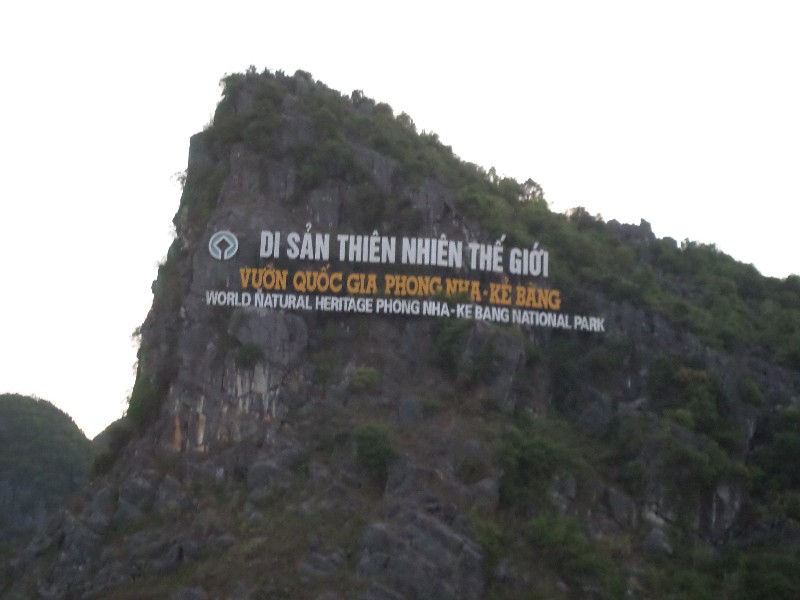 The day I arrived I met some people who wanted to visit Phong Nha cave; the longest river cave discovered so far, which was within walking distance of the hostel. We got enough people to go so that the boat through the cave cost £2! 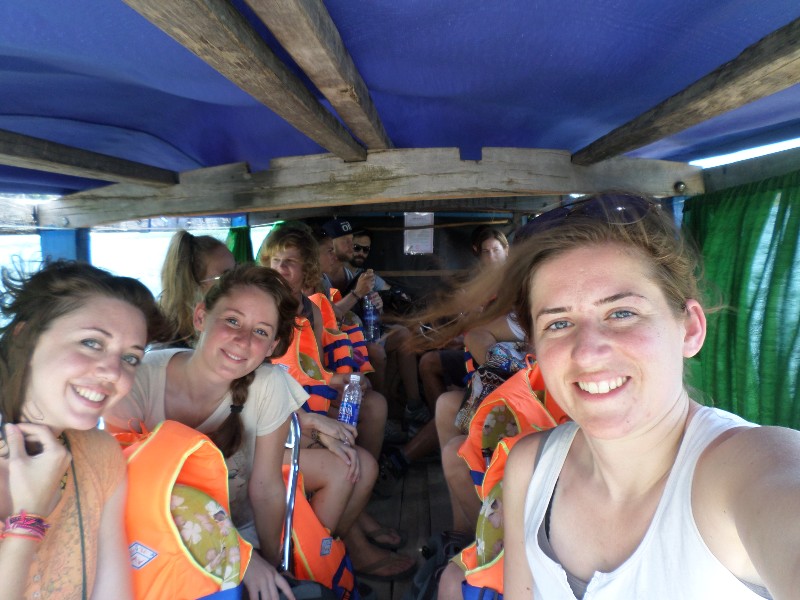 The Song Con river from the cave was the most beautiful river I have ever seen, it was so blue, and crystal clear; the photos do not do it justice!
The boat travelled at a leisurely pace so that the trip into and back from the cave took 3 hours. Inside the cave, the rock formations; stalagtites and mites, were just immense, again, photos could never do it justice, but I tried! 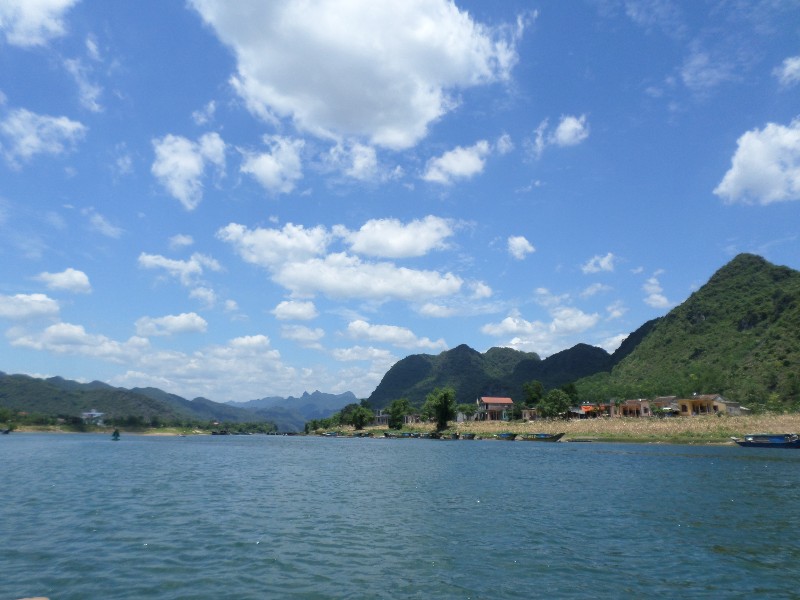 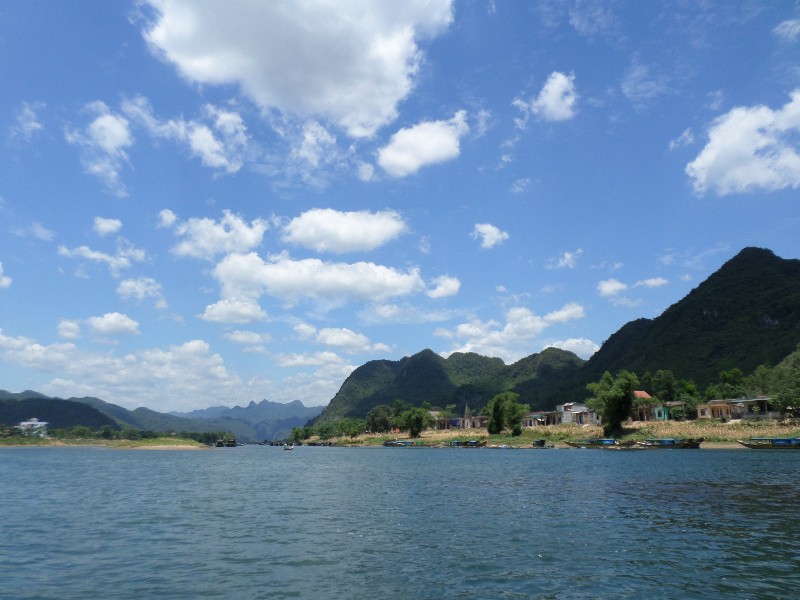 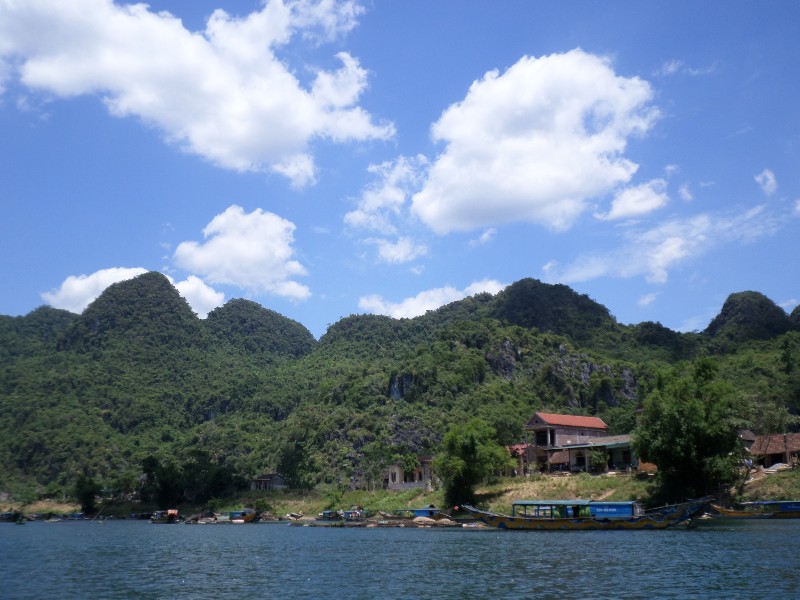 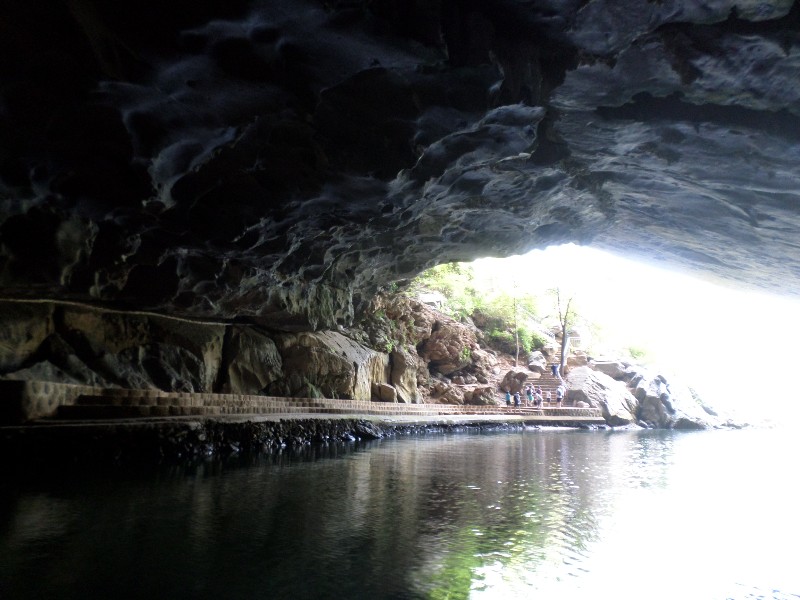 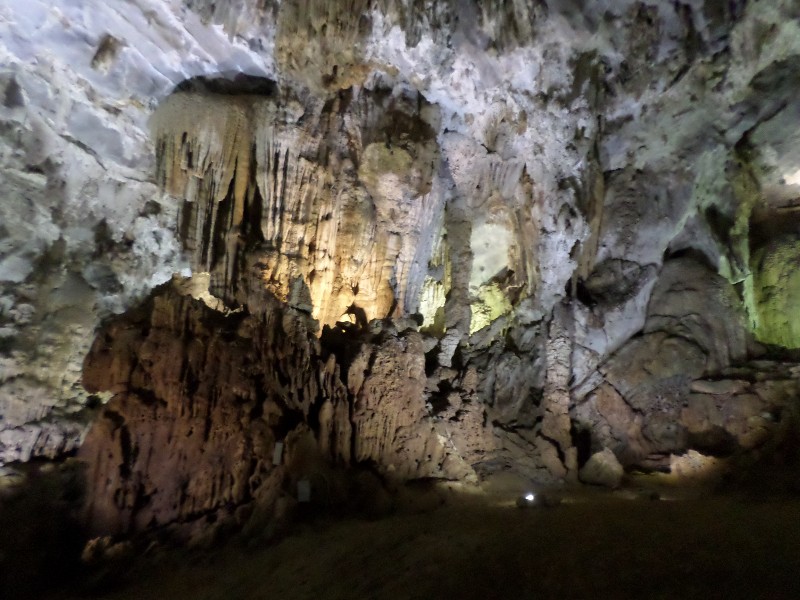 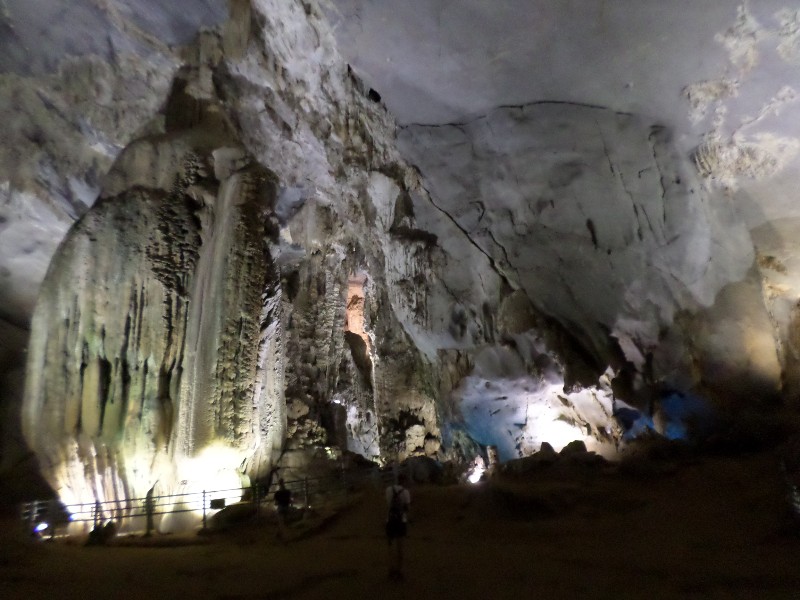 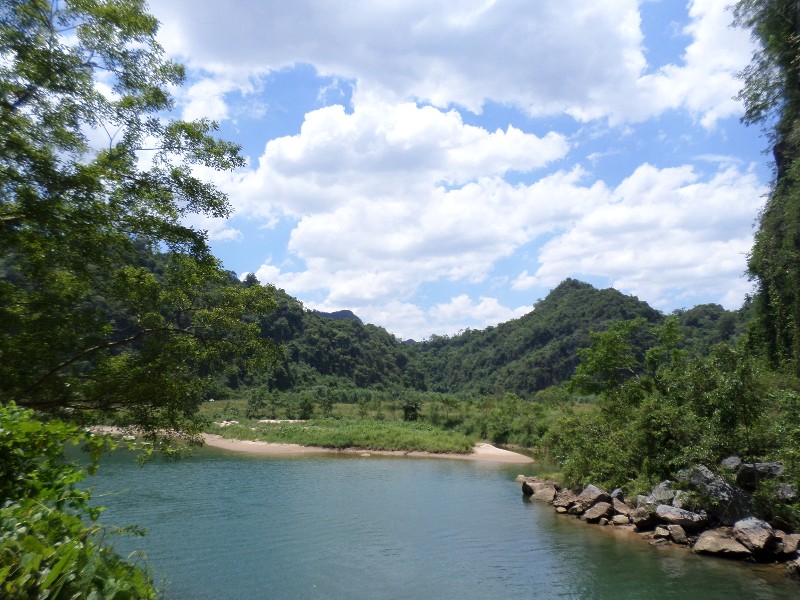 We all then went for food at a local restaurant and planned the rest of the day. A small group of us decided to explore the local villages and visit a restaurant which had a unique take on fried chicken… Mukesh (London) had his own bike and so he chauffeured me around for the day, Marc (Dutch) took Mitsuho (Japanese), and a French couple joined us. 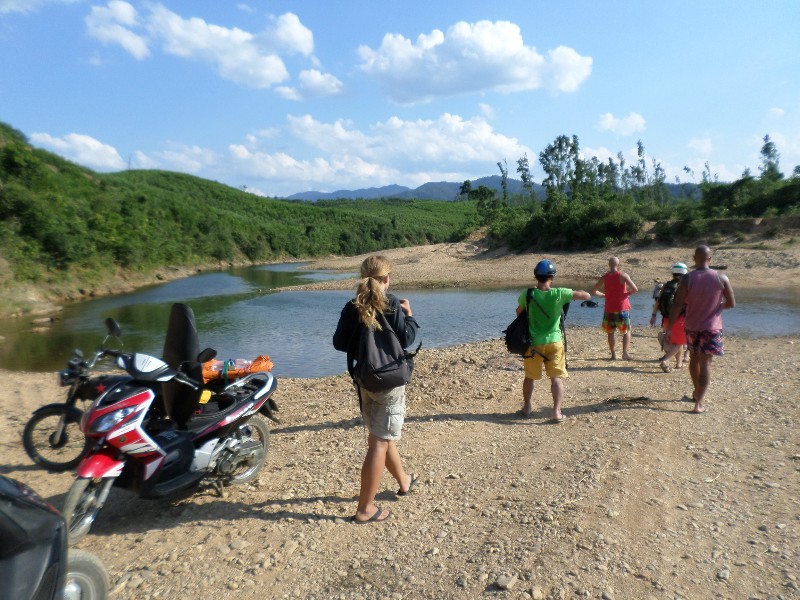 Part of our journey through the village involved crossing the river at a low point. We also got quite a bit lost, and ended up at an ‘eco-farm’ (pretty sure all farms in this region were eco-farms!) Which was run by a family who didn’t speak any English but still helped us find our way back to the road! 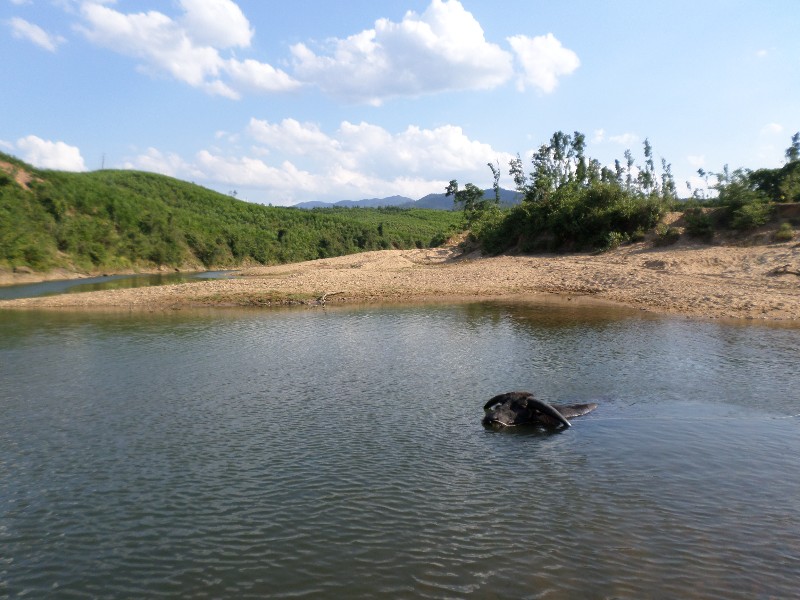 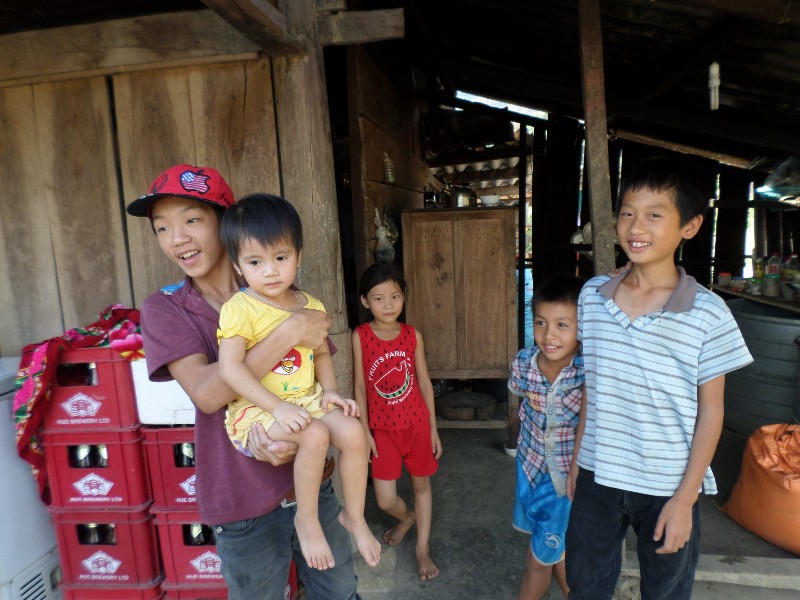 We eventually found the place, where we went tubing in the river and have the novel idea to let tourists catch and kill their own food! Mukesh caught and killed our chickens (slit the throat and let it bleed out…) whilst we watched (I was the designated camera-woman for him). I think we all thought it would be easy to do and watch, but actually it was quite hard and the whole process happened in silence.

Unfortunately, the way it was cooked (bbq), combined with it’s free-ranged-ness, meant the meat was so tough that we didn’t appreciate it as much as we should. Poor chicken! 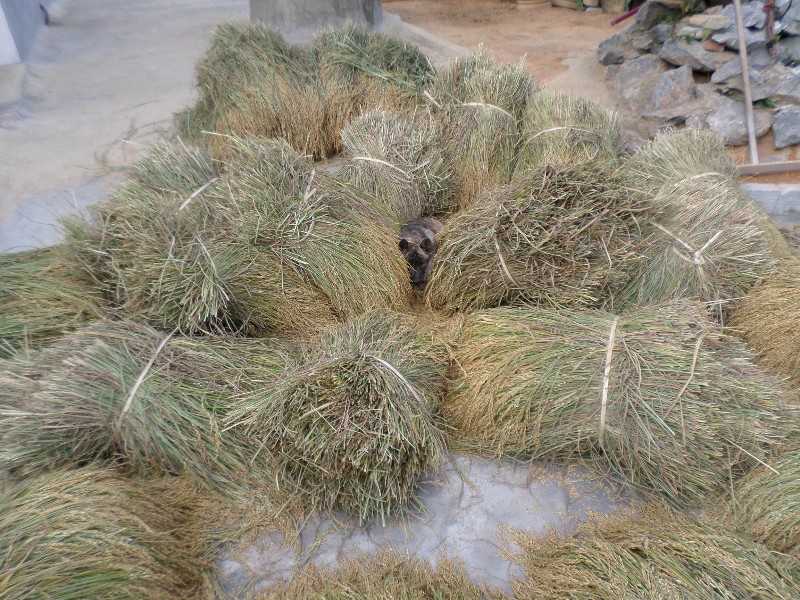 Can you spot the puppy hiding? 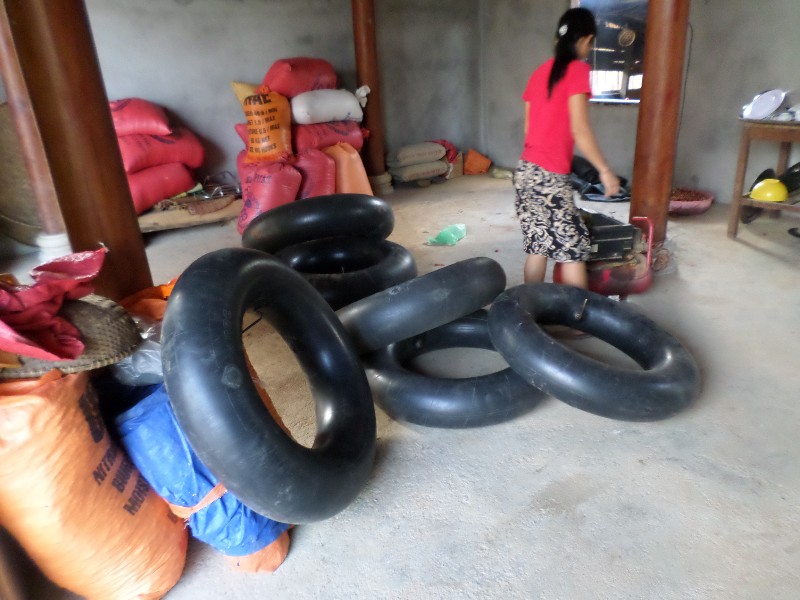 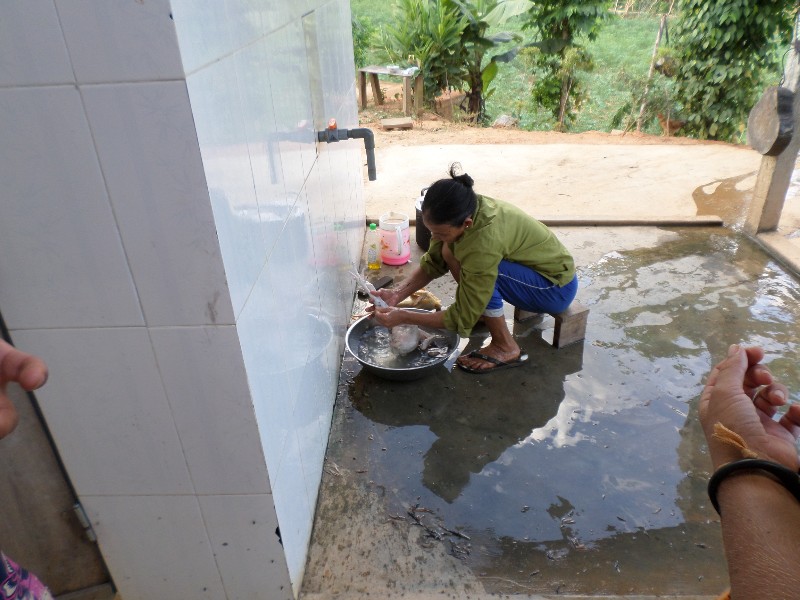 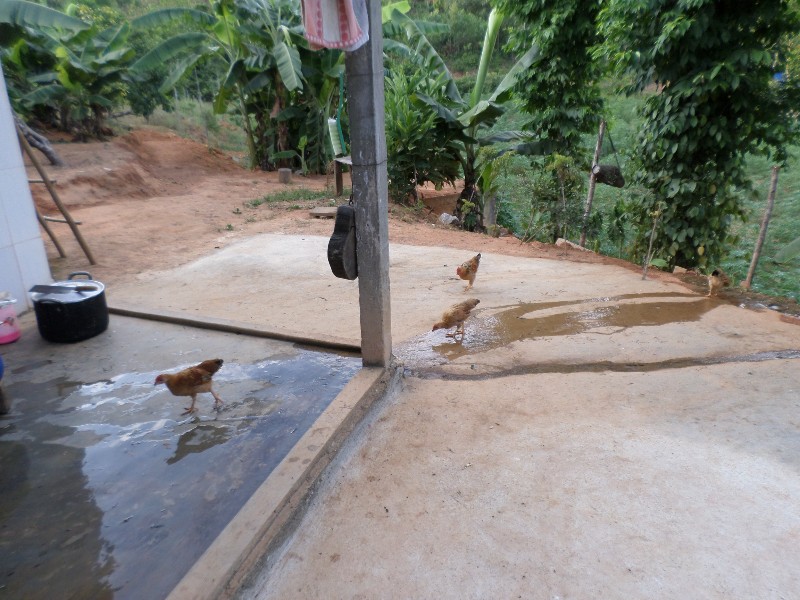 These chickens got to live another day!

That night I cancelled the tour I had booked with the hostel and decided to try and wing-it the following day considering how easy it had been to find people on bikes going to the nearby caves solo.

The gamble paid off, as the following morning at breakfast I met a group of people looking to visit the caves; Nielz (Germany), Danny (Santa Barbara) and Cameron (Seattle) had their own bikes and had just met. Myself, and a couple from London (Chris and Jenny) rode on the back of the bikes and the day was perfect. The people I was with really made the day a special day, and I think this day is possibly the best day I’ve had since starting my trip… 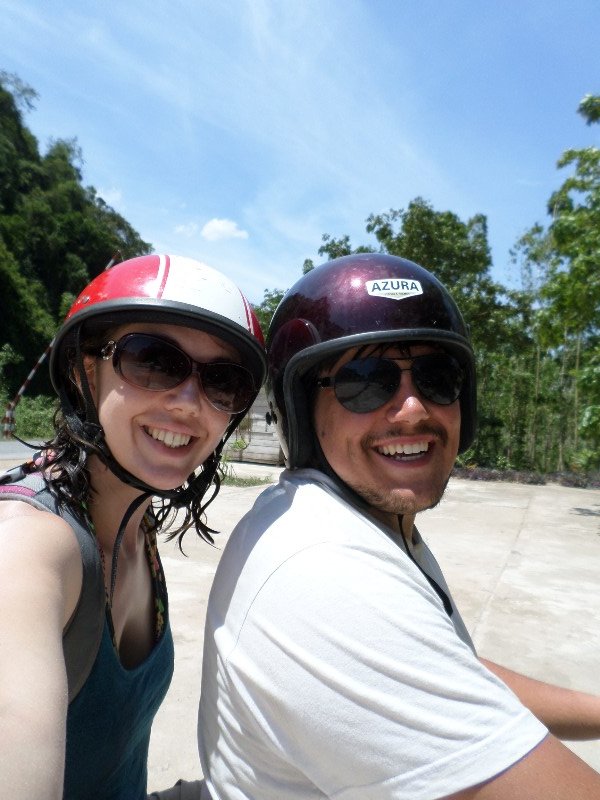 We rode first to the dark cave… I hadn’t heard a lot about this cave, only that it was dark and required you to wear only your bikini! The drive to the cave took a good 2 hours along one of the most scenic roads I’ve ever been on. We followed the Song Con river, which was the most extreme blue. I wish I’d taken better photos, but instead, I was mesmerized just looking at it and didn’t want to waste time looking through a lense at it. 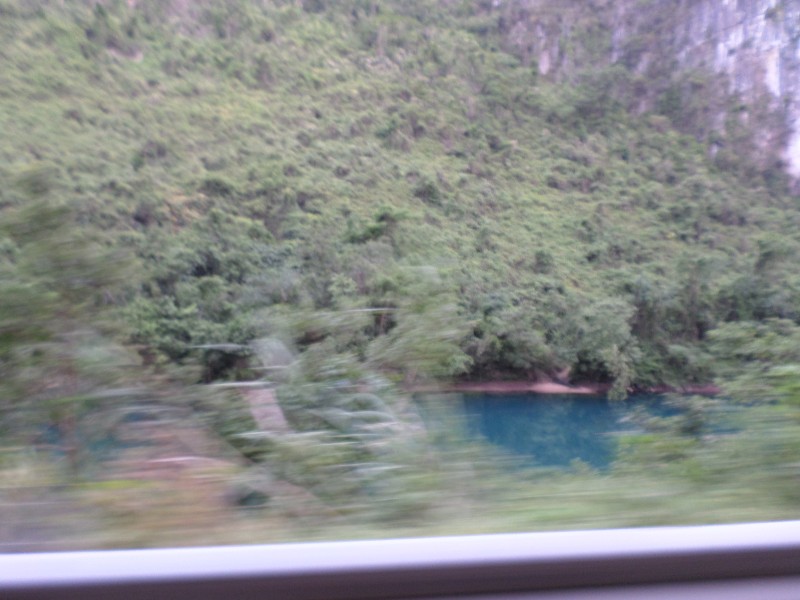 A blurred photo, but you can still see the colour. 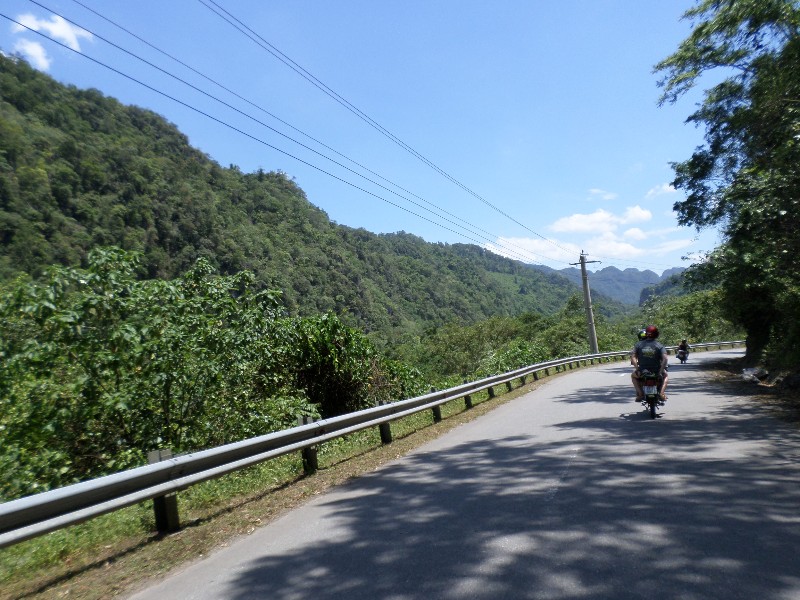 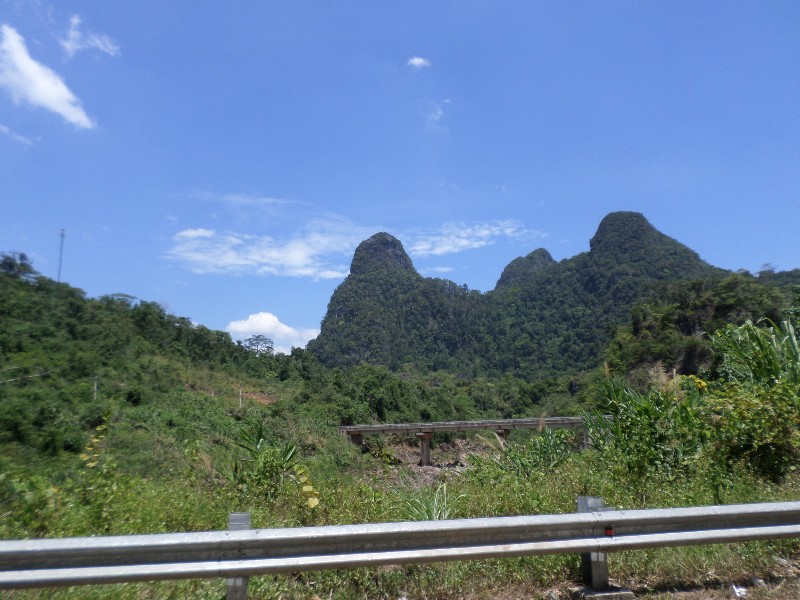 We arrived at the ticket office for the cave and were told to put all our belongings in a locker and just wear swimwear… We were given a life jacket and a hard hat with a head torch. We walked down to the blue river and then kayaked towards the entrance of the cave. We left the kayak and entered the cave, which suddenly became very dark. With our head torches the cave looked massive. From walking on wooden walk ways we eventually started walking on the cave floor, and then in the river, before eventually swimming through the cave in pitch blackness. We eventually got out of the water, took our life jackets off, and started walking through thick mud and muddy water…

We became covered in mud, with no way to wash it off! In some places, the mud was so thick it squelched loudly and made us all laugh! And in others, the climb was so steep, we had to ascend on hands and knees! And what goes up, must come down… We slid on our bums down the slopes into giant mud baths below, splashing mud everywhere! I got so much mud in my eyes and mouth – the trick was to blink a lot to get it out, since our hands were covered with mud too there was no way to clean them.

Cameron’s GoPro suffered the same fate and had mud caked on the lens. However, he very ‘cleverly’ licked it to clean it…! The video of that is hilarious, especially when the sound afterwards is us all shouting “eugh!! Cameron!!!”, and then a shot of his muddy face!

On the way back, the guys, (mainly Chris!) decided it would be hilarious to continually hide behind rocks with their head torches switched off and jump out in the darkness to scare Jenny and I, but it became so predictable in the end – literally every turn – that I was laughing so hard I couldn’t breathe!

After the mud we eventually got back to the river deep in the cave and cleaned ourselves before making the journey back out to the kayaks and swimming in the blue river to clean off properly in the daylight.

The day still wasn’t over though, and after drying off, we got back on the bikes and continued towards a cave known as paradise cave.
However, literally 100m from the cave, the chain on Nielz’s Honda win snapped, leaving us potentially stranded at the cave! We called a mechanic and hoped it would be fixed by the time we had visited the cave. We ate at a restaurant outside the cave before beginning the strenuous climb up towards the cave entrance. The day was so hot and humid, and the walk up was tough that we were all drenched with sweat by the top. Upon entering the cave we all sighed with relief as it was so cool and dry inside – the reason why it’s called paradise cave

The cave went 7km into the mountain, but only 1km was accessible to solo travellers, still we couldn’t get over how massive it was… again photographs do not do it justice. 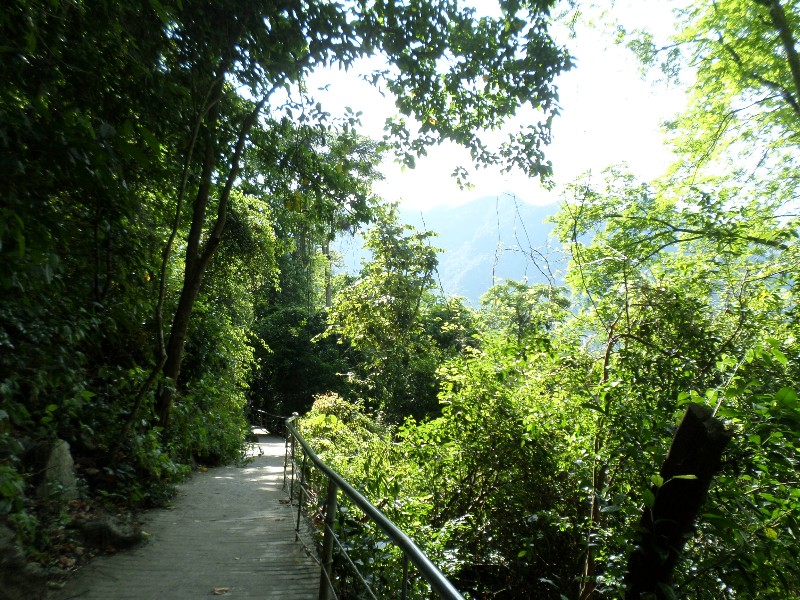 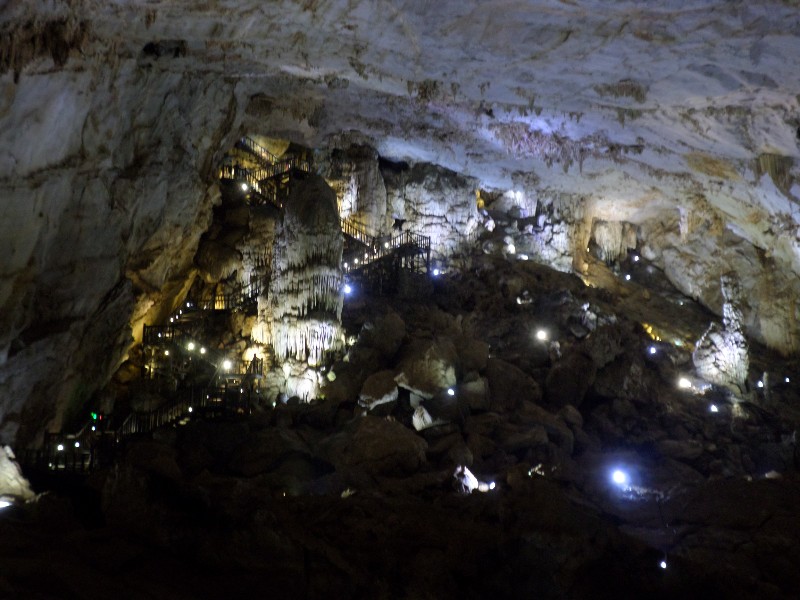 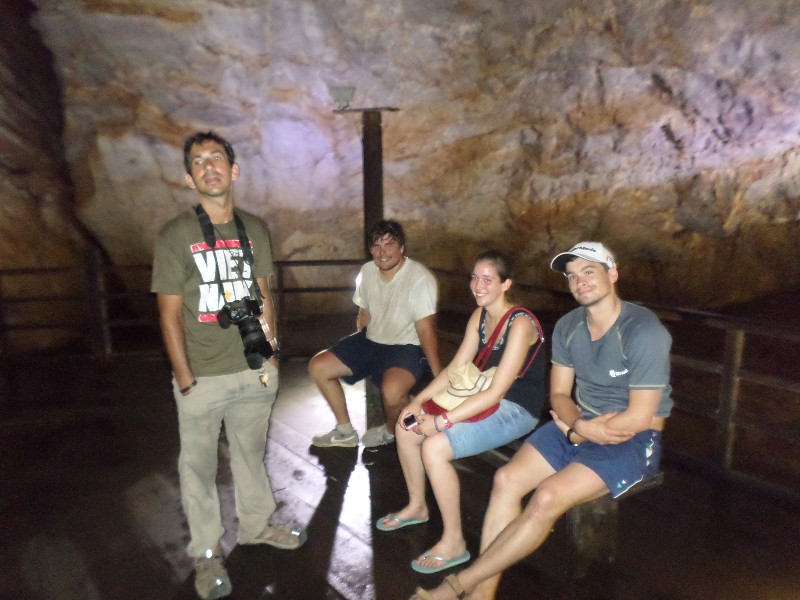 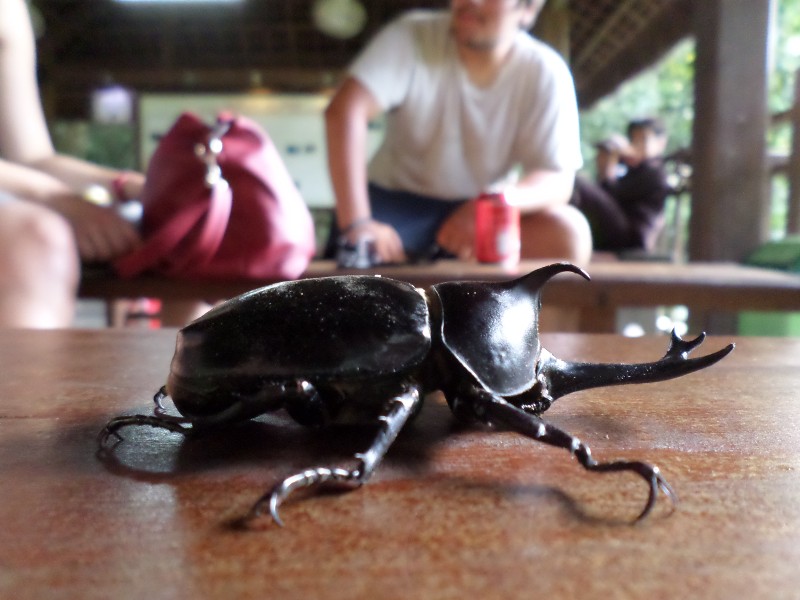 Unfortunately, Nielz’s bike wasn’t fixed when we got back, but we only had to wait a little while before we were back on our way.

The road back as the sun was setting was beautiful, and topped off a perfect day with wonderful people. 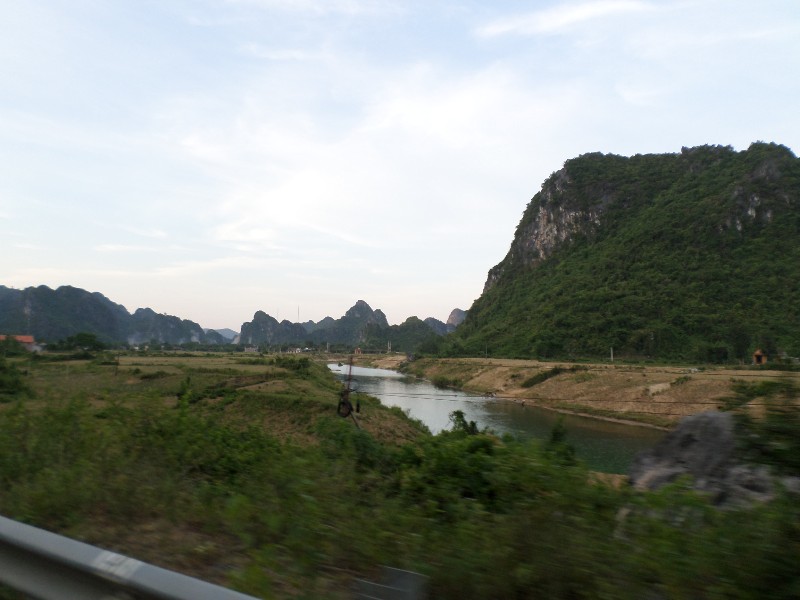 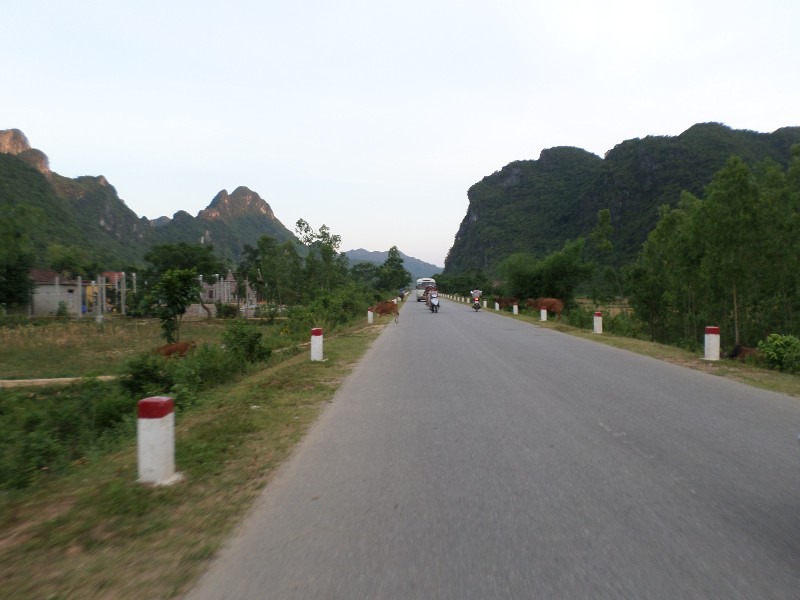 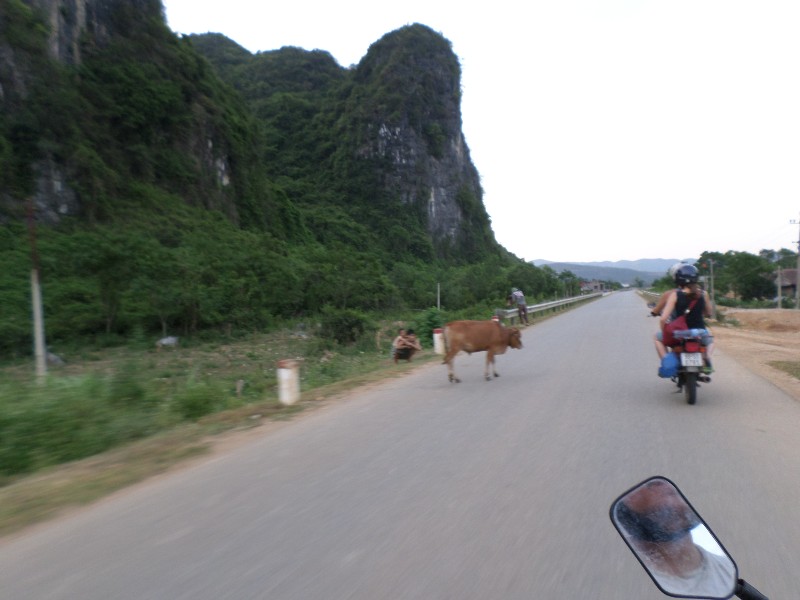 We tried to have a few drinks that night, but ended up having early nights instead. I planned to leave for Hué the following day on the cheaper local bus, which left at 5 am, so an early night was perfect.

The following morning I woke by myself to find that it was 8 am! I had slept through my alarm, which had apparently woken everyone else in my dorm, but not me… why didn’t they wake me?! Haha

I spent the day instead chilling and updating my blog before catching a train from Dong Hoi to Hué, where I entertained at the Vietnamese travellers by not being able to open a tube of squirty tofu which I was offered… perhaps I knew the inside wouldn’t taste nice!

I was sad to leave phong nha, especially since the hostel had advertising for jobs available… perhaps I will return, or maybe it’s best not to… and just to remember the amazing time I had there as I don’t think it could ever live up to my memories if I returned…