I arrived back from Sapa very early in the morning and had to walk across town back to my hostel where I had left my main bag. Walking with my small bag was so easy that I once again wished that my main bag was small. Although, I do enjoy having the luxury of my hairdryer! I decided from here to keep an eye out for a strong small bag to replace my current one.

I spent the day relaxing and sleeping in the hostel, they were very accommodating since I didn’t pay for a room, they let me shower in a spare room and sleep in the common room until my next bus to Ninh Binh.

I arrived at Ninh Binh at around 8pm and checked into Thanh Thuy guesthouse. The following day I hired a motorbike taxi to drive me to some of the local sights. Ninh Binh itself is not a particularly interesting town, but the countryside around is spectacular. Limestone karsts like in Halong Bay, but on lakes and rivers and either sides of the roads. The first day in Ninh Binh I visited Hang Múa Hill, a small temple atop one of the limestone karsts with stunning views over the valley of Tam Coc below. 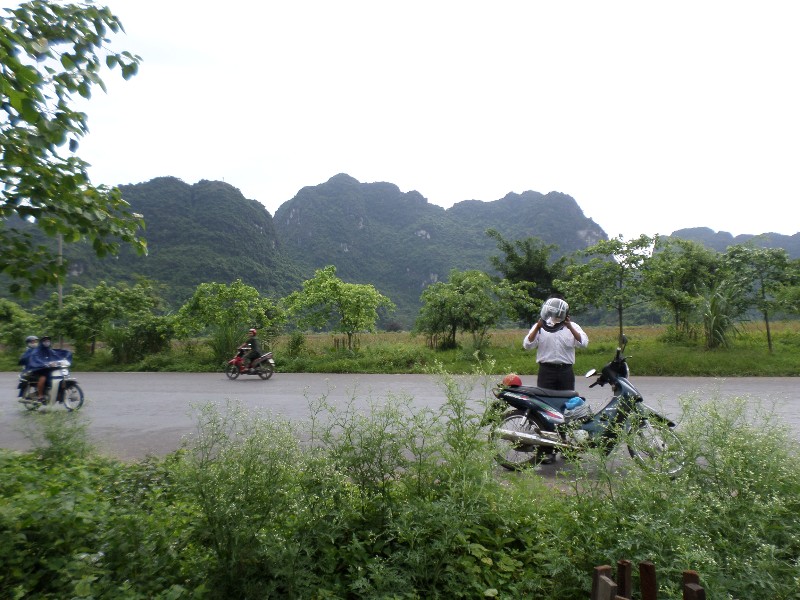 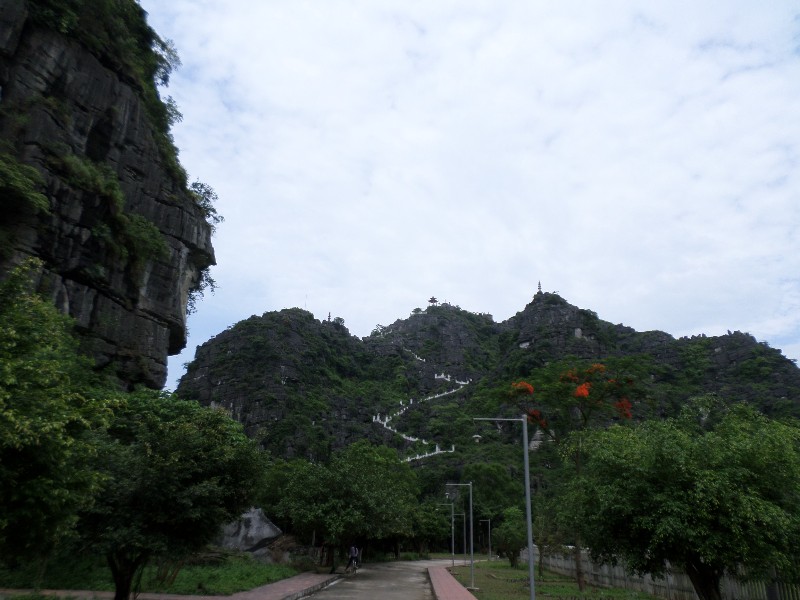 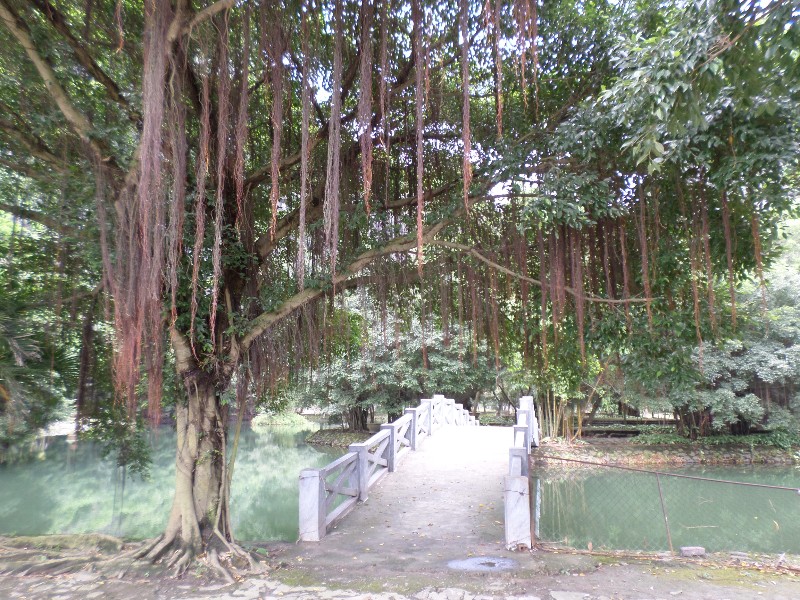 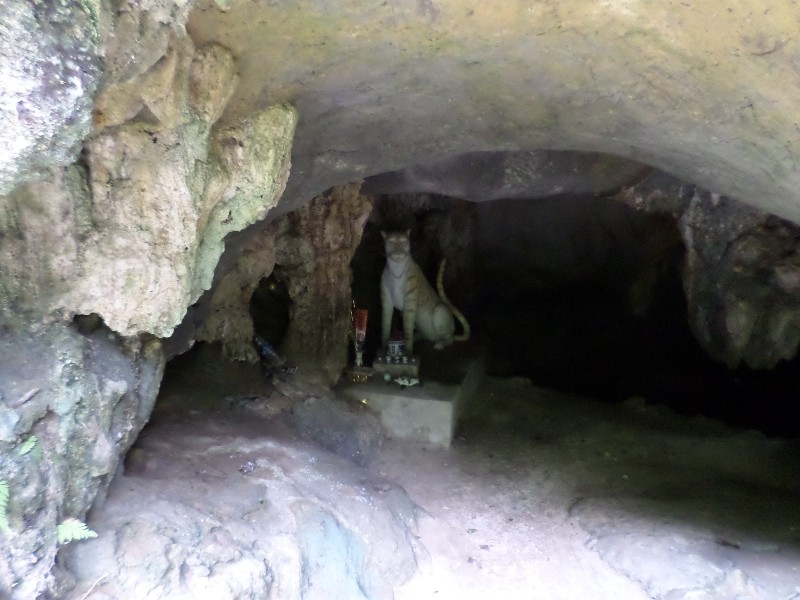 And there was a hell of a lot of steps! 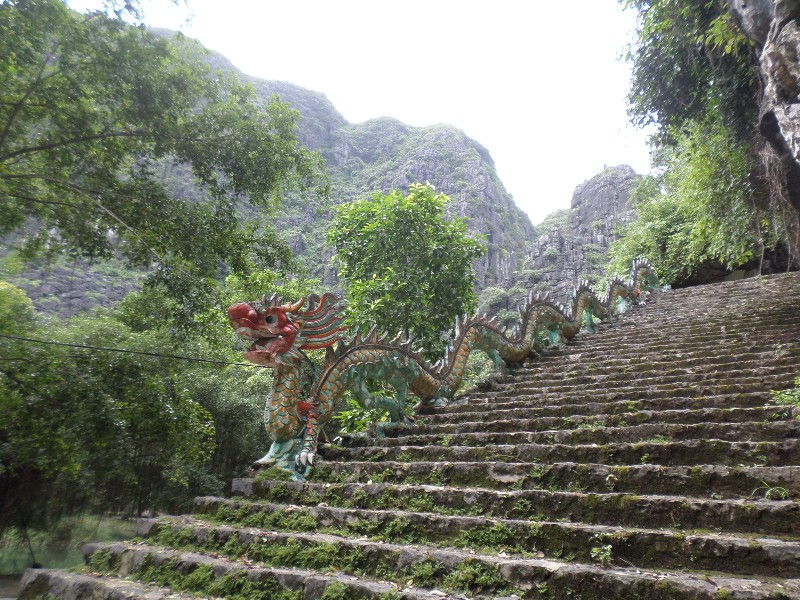 The walk up the hill was strenuous, and the weather was so humid, after about 100 steps I was drenched with sweat! The stairs seemed never ending at some points, but I kept going for around 500 steps until I reached the top. It was worth it and the breeze at the top was heaven! 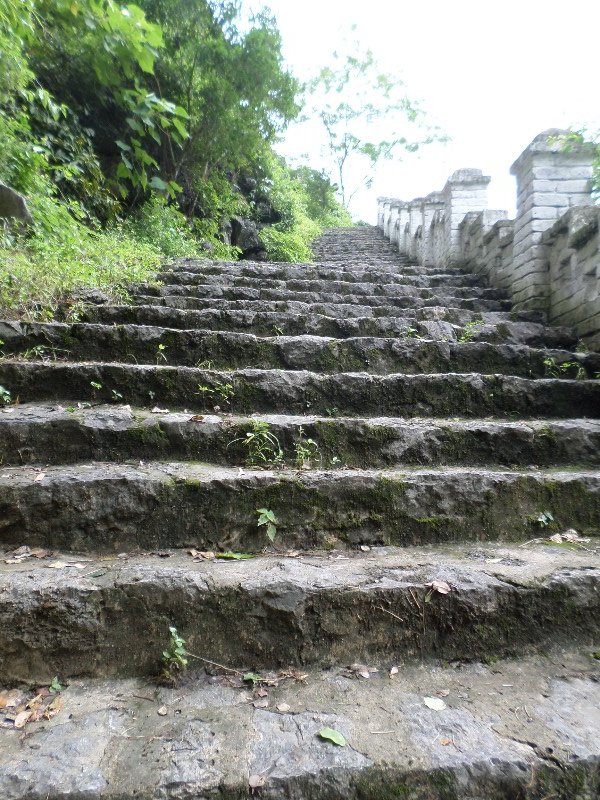 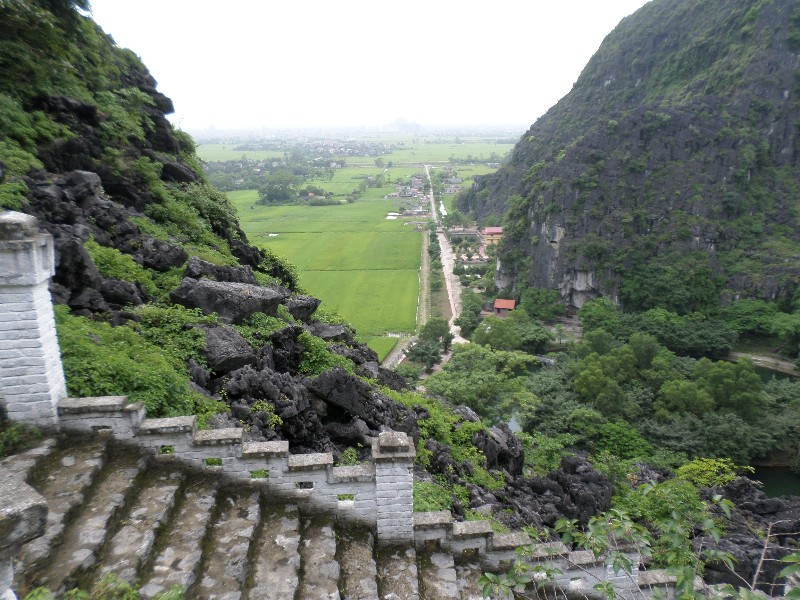 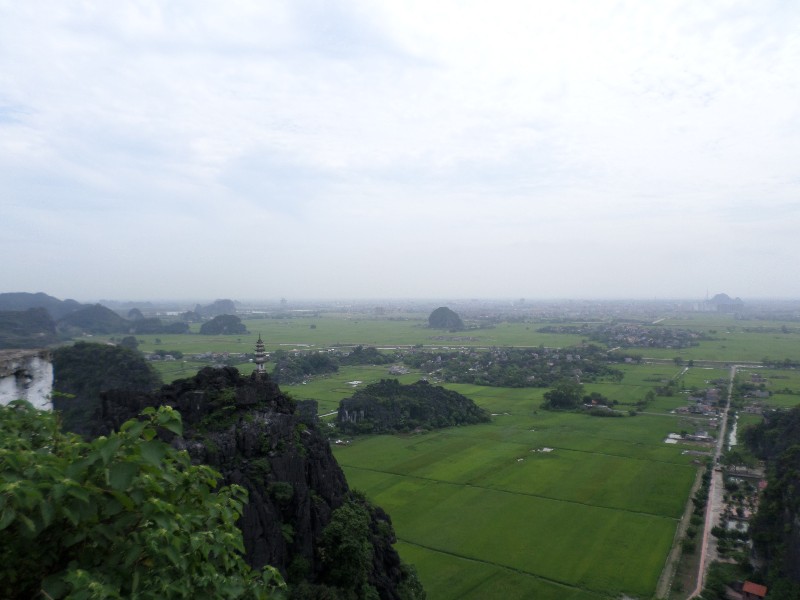 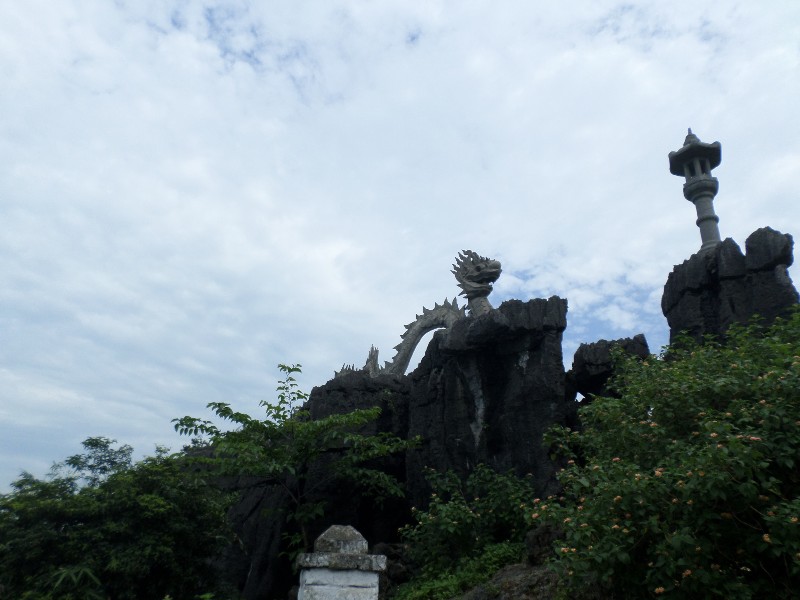 After climbing back down we drove to Tam Coc, where I rented a boat to paddle along the river, through caves and I saw the hill that I had just climbed. Boats were for 2 people and so I went with a Dutch girl called Dee that was travelling as a group of 3 girls.

Our 2 boats travelled side by side amongst many other boats, it was so touristy! Local people would pull up along side to try to sell you drinks or crafts, and try to convince you to buy drinks for your boat-lady, which was a scam as the people wouldn’t drink the drink you bought, but instead give it back to the seller once you had left!

All the boats were driven by women, which I liked, who very skillfully used their feet to paddle the oars. 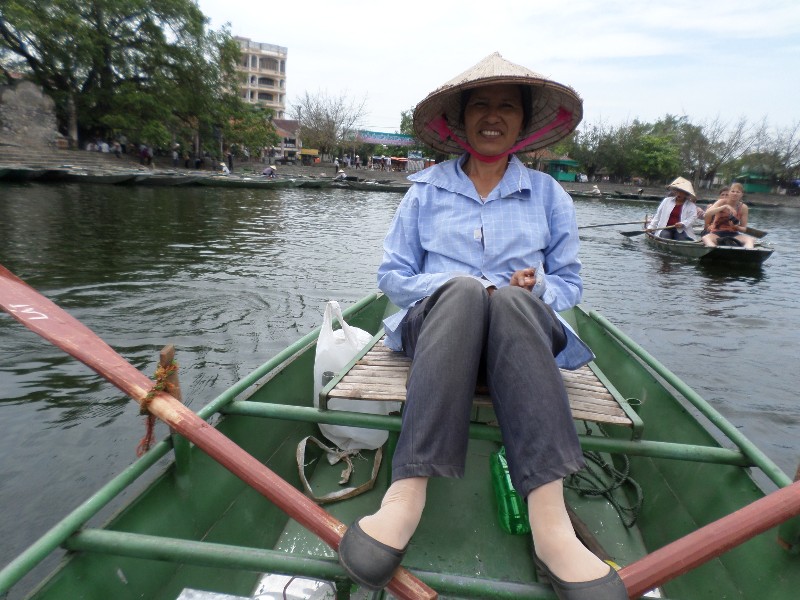 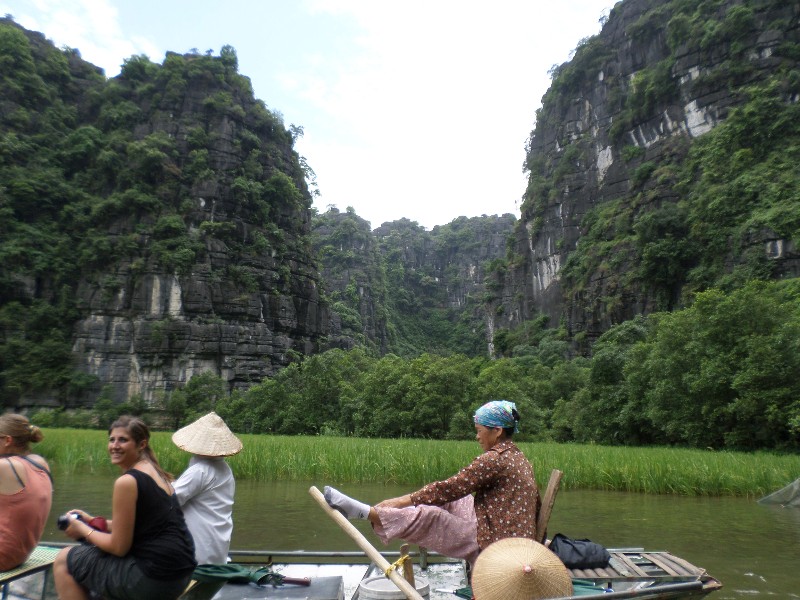 Despite the hassle of the hawkers, there was no denying the scenery was beautiful. 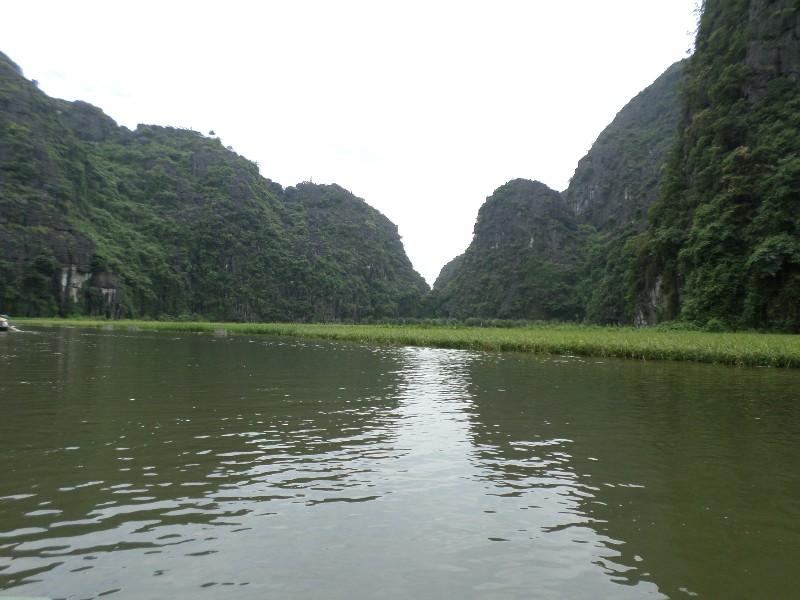 This is where I had climbed to… you can see the Dragon on top of the hill! It didn’t look as high as it felt! 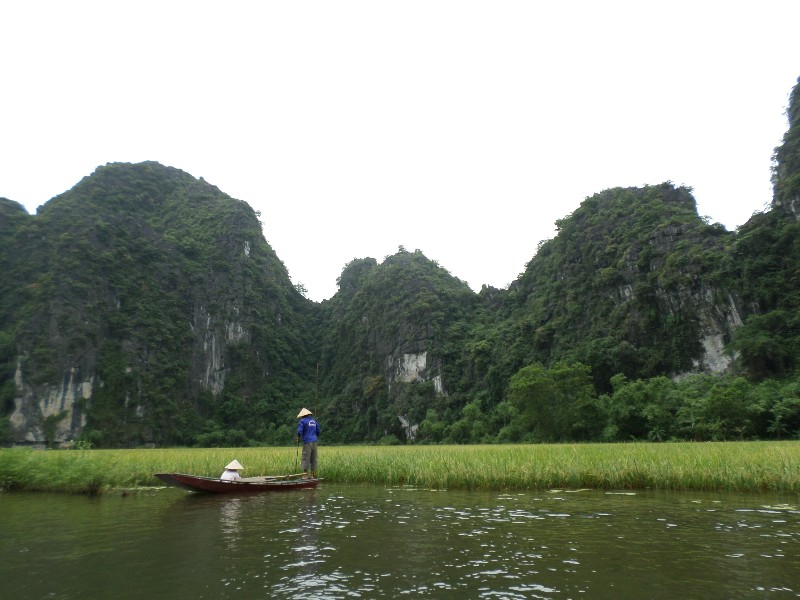 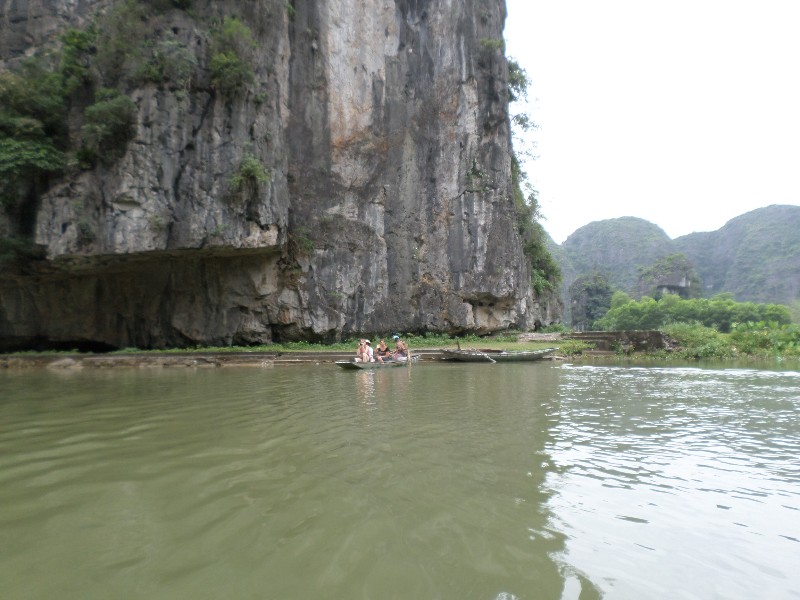 My driver then took me to his friends’ restaurant, something that I couldn’t refuse, but as long as the food is nice and cheap, I didn’t mind.

From here we drove to Bich Dong Pagoda, where I once again had to climb a lot of stairs! At the top of the hill the stairs ended and instead there was a steep rock face with hand and foot holes in it. A sign said “please climb” and so I did for about 10 minutes until I decided I had no idea how I was going to get down if I went any further, so I turned around! 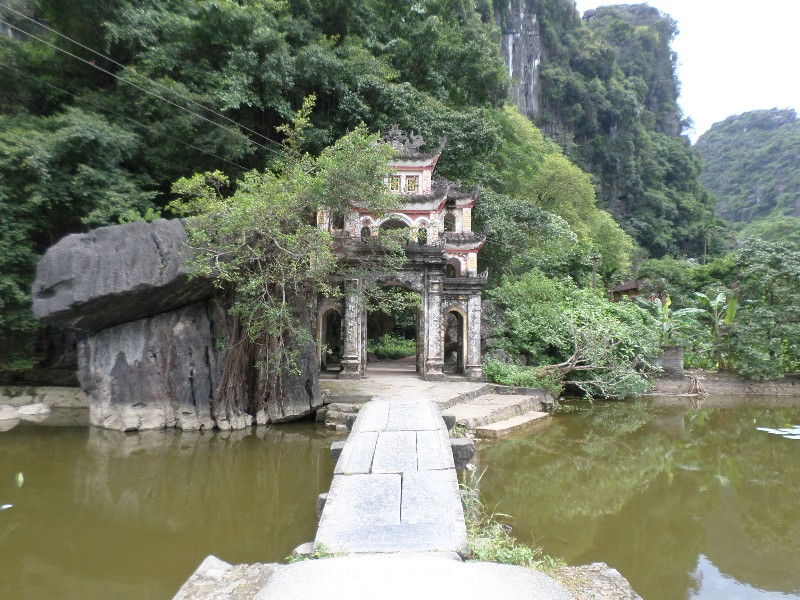 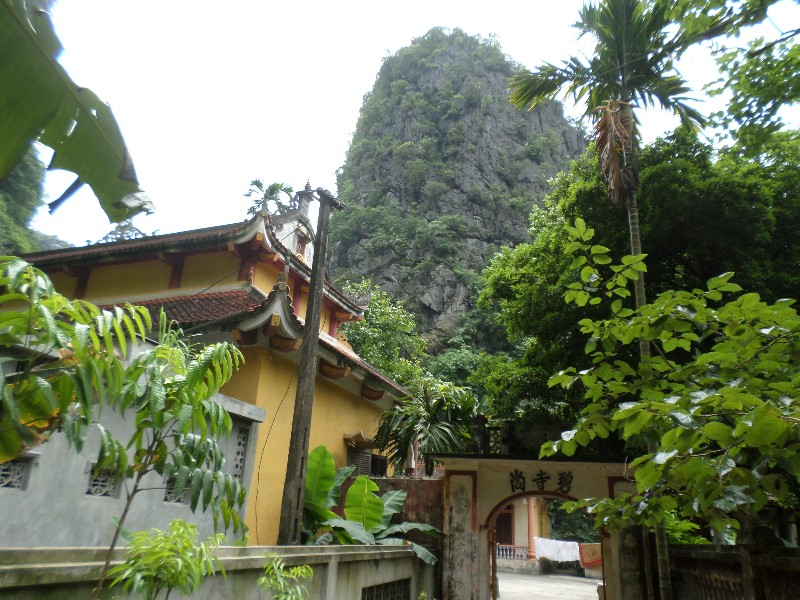 That evening, exhausted, I ate in the hotel and got an early night.

The following day was very similar; I had the same motorbike taxi man take me to Hua Lu, an ancient Vietnamese city with temples devoted to the military leaders which fought the Chinese at that time.
We went from here to Bia Dinh temple and pagoda, a huge complex of covered pagodas climbing the hill, ending in a large temple with 3 huge gold plated Buddhas. The tall pagoda next door was unfinished but still impressive. 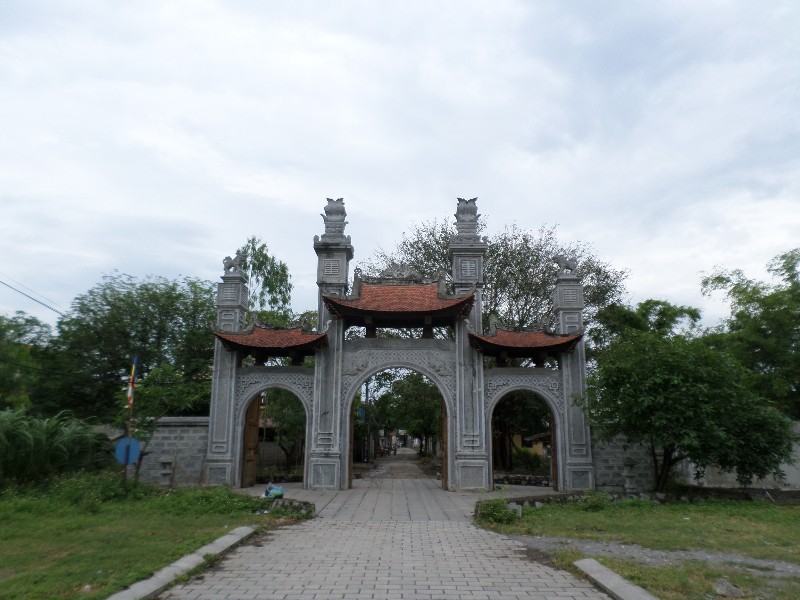 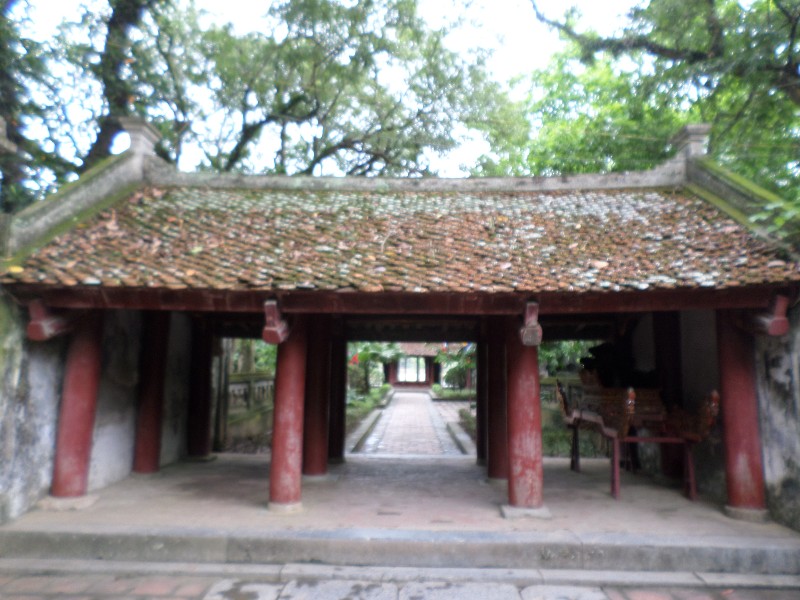 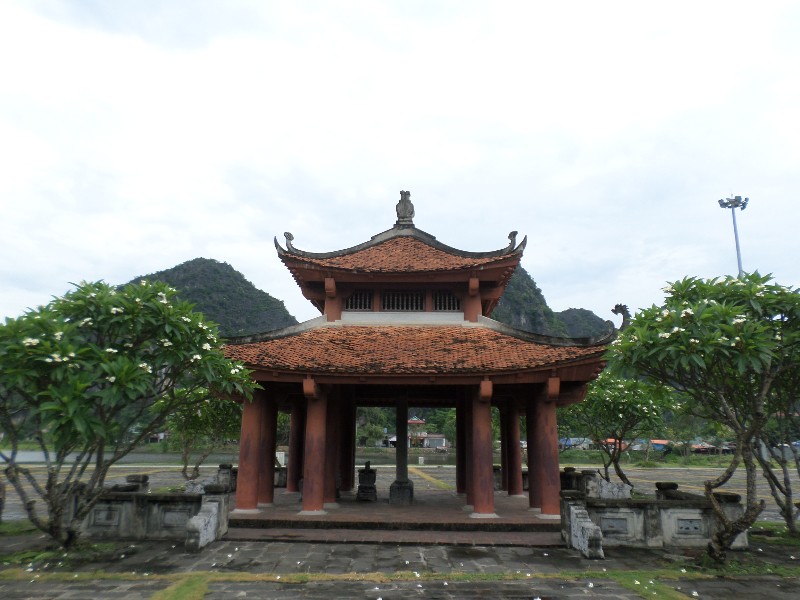 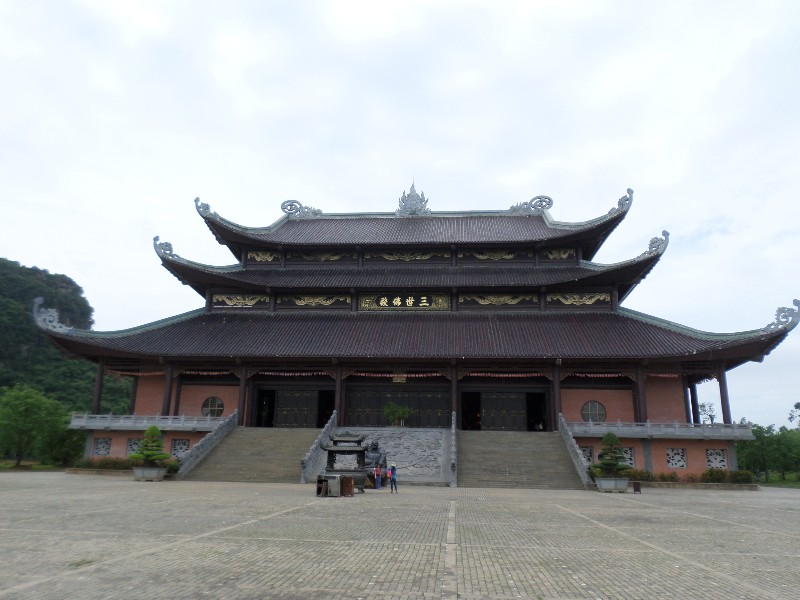 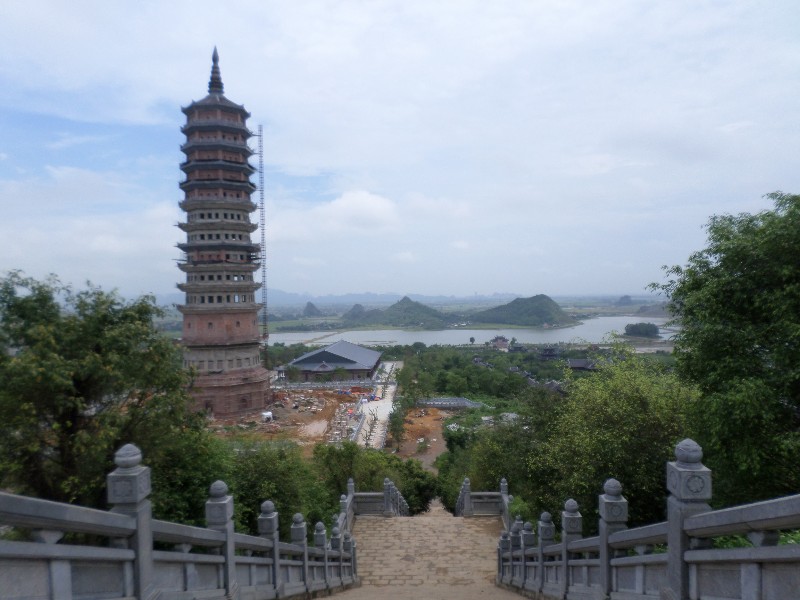 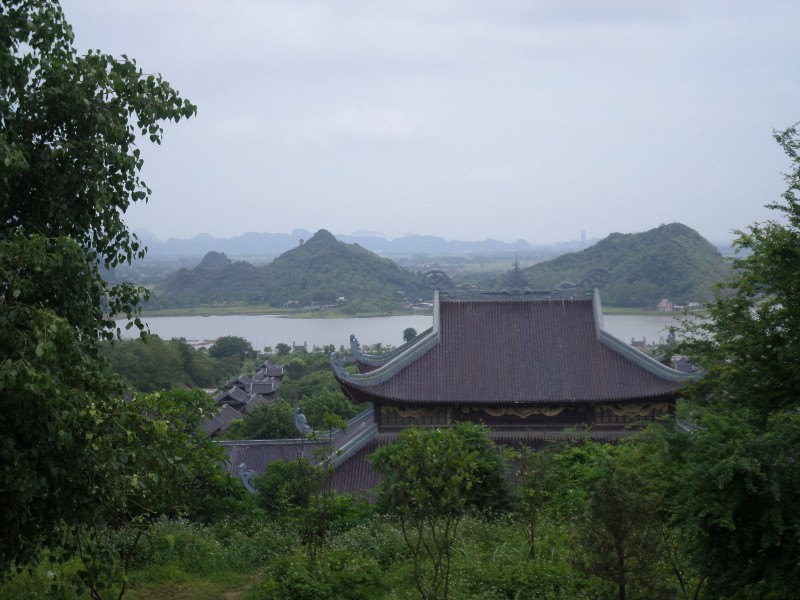 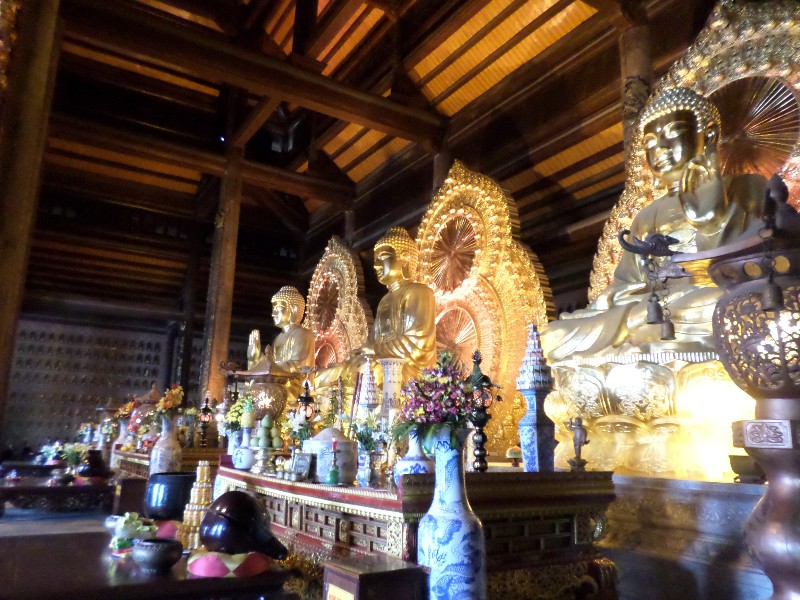 Again I ate at his friend’s restaurant, where the family was very interested in my relationship status, especially the son, who found it fascinating that we were the same age! I told them I was married and flashed my rings!! Haha I knew there was a reason I wore my rings!

From here we travelled to Trang An national park, a place similar to Tam Coc with limestone karsts and river caves. However, at this one I was the only foreign tourist, there were lots of Vietnamese tourists though, who followed me around the whole park in their boats and constantly took photos of me! A little bit annoying and kind of spoiled the serenity…

Trang An was much more impressive than Tam Coc, with many more river caves and places to get out of the boat and explore the islands. 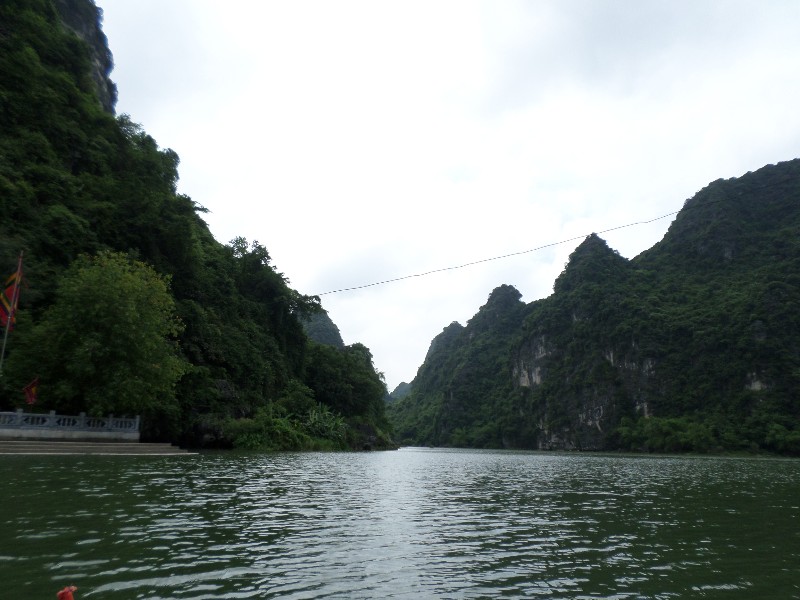 Ninh Binh was a beautiful place, with all the amazing karsts. The town and some of the places I went were absolutely deserted, but then places like Tam Coc were extremely busy with tourists. It seems sad that most people only go to a handful of popular places when there are so many amazing places to see…