I finally broke the Sean-Libby team by leaving for Sapa. I had a great time travelling with someone for such a long time, especially someone that I could, and would, be close friends to back home. It makes conversations more interesting than “where have you been?” And “where are you going?”. And it’s nice to share memories with someone too. With Sean, it was also nice to have someone chauffeur me around everywhere on a motor bike 😆 and it made some things cheaper as you could share the cost of private rooms where there are no dorms, like on Cat Ba island. But, travelling alone is the reason I came here, so I waved goodbye to Sean as he headed south to Hue and I went north west to Sapa.

I got an over night sleeper bus from Hanoi to sapa town, and quickly learned that the worst seats on the bus are those at the back, on a top bunk, against a window… which is what I had! The journey was awful, being thrown all over the place among winding roads and bumps, but I made a lot of friends which made up for it. Once the sun rose, the last hour of the journey became bearable as the view from the window was spectacular.

I arrived in Sapa early in the morning, I had booked a 2-day 1-night trek and Homestay, so I was picked up by motorbike and taken to a nearby hotel to shower and have breakfast ready for the trekking. I had made sure that I packed light, and so only had my small backpack with just the essentials and some shampoo. This made me realise how much unneeded items I have in my big backpack!

After breakfast, I was introduced to my tour guide, Sue, and the rest of my tour group… I had thought I would be with an individual family and no group, but actually I had inadvertently booked on to a big tour. Anyone who knows me, knows I hate tours, but it wasn’t that bad actually. I mean sure, I won’t be booking another any time soon, but the people were nice. Our guide Sue, aged 27, was from Ta Van one of the local minority villages, and was dressed always in her traditional wear with her hair wrapped and tied with a comb. She spoke great English and had a wicked sense of humour, which a lot of the group didn’t get!

We set off for our 6 hour trek, and were met instantly by tall mountains (the biggest in Vietnam, mt. Fansipan) and deep valleys covered in rice terraces being tended by the men and their domesticated water buffalo. It was immense, I hadn’t expected the rice terraces to be literally everywhere! 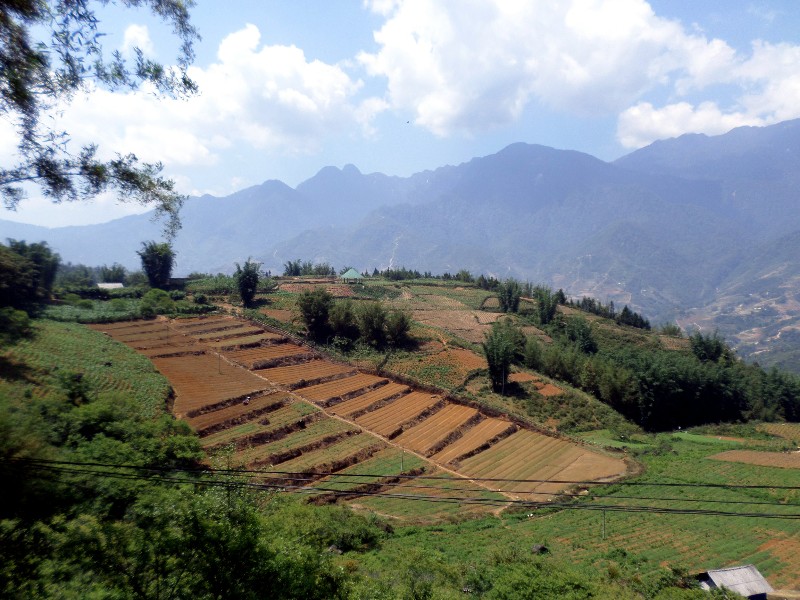 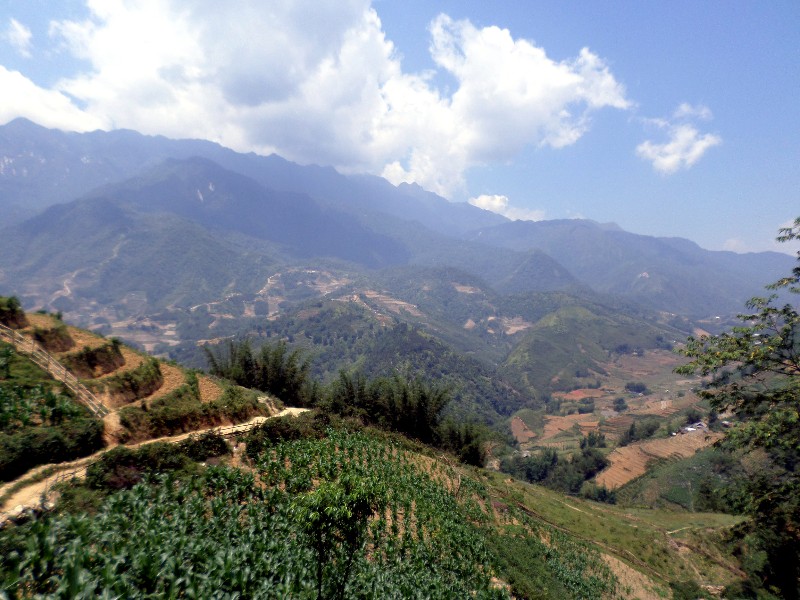 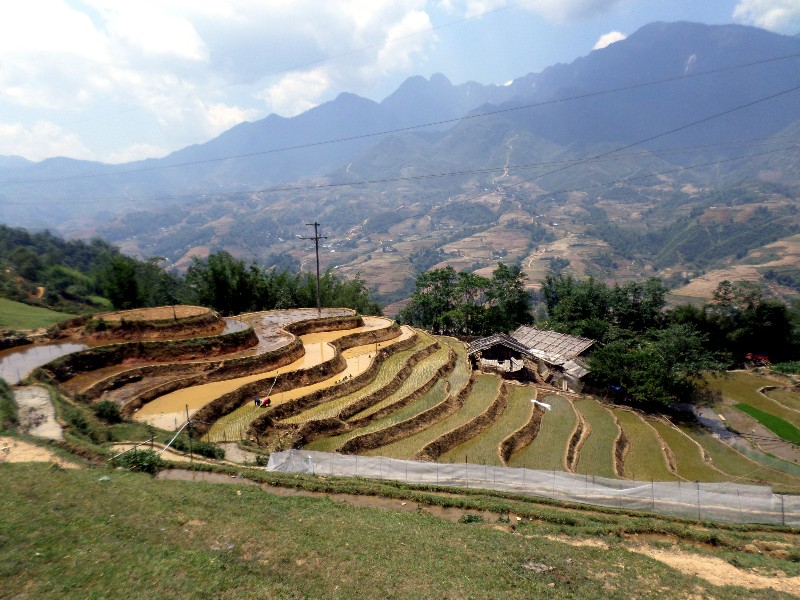 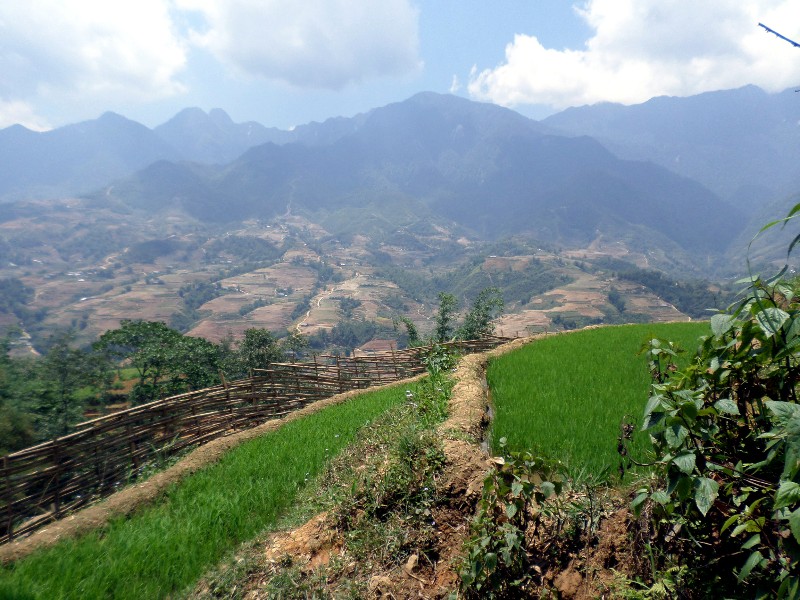 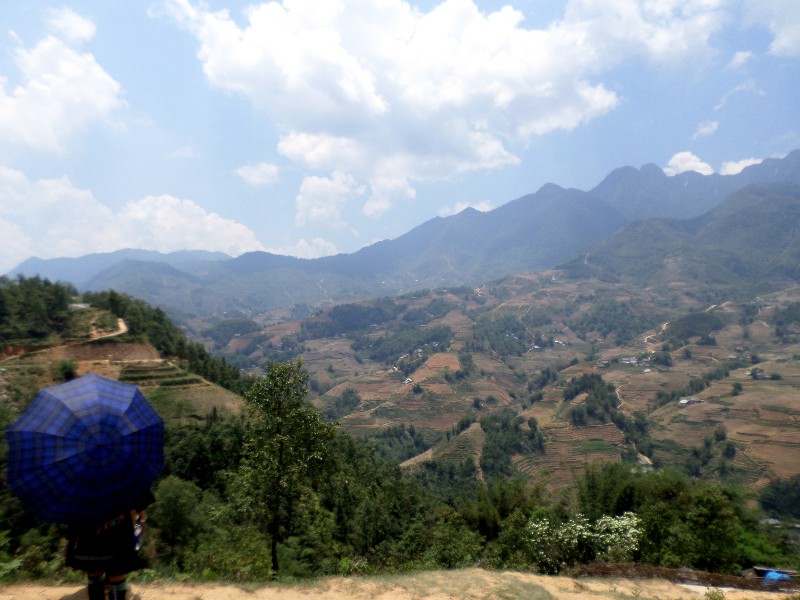 We stopped regularly for water and rests, since the terrain was steep and the sun was hot. We walked through bamboo forests and along the walls of rice paddies. The temperature was cool here, due to the position under the mountain, almost 10 degrees cooler than the rest of Vietnam, but the sun was relentless making it hot out of the shade. 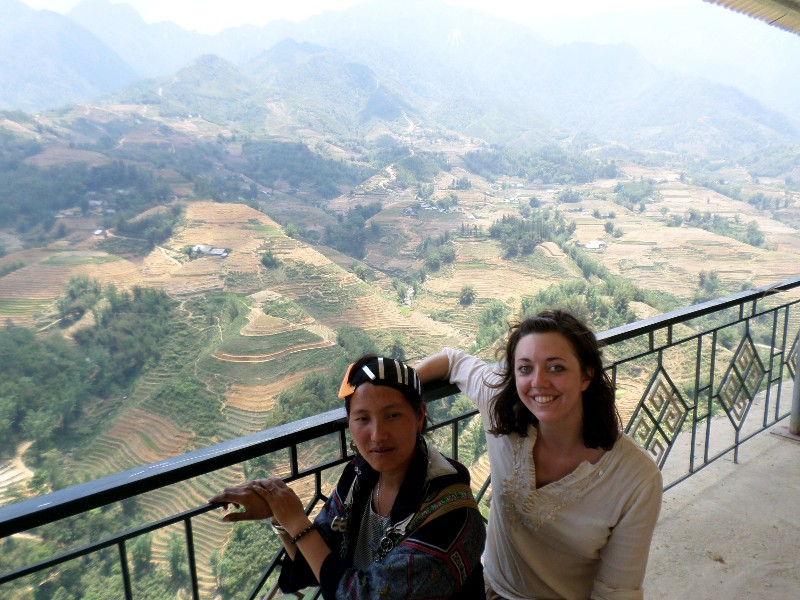 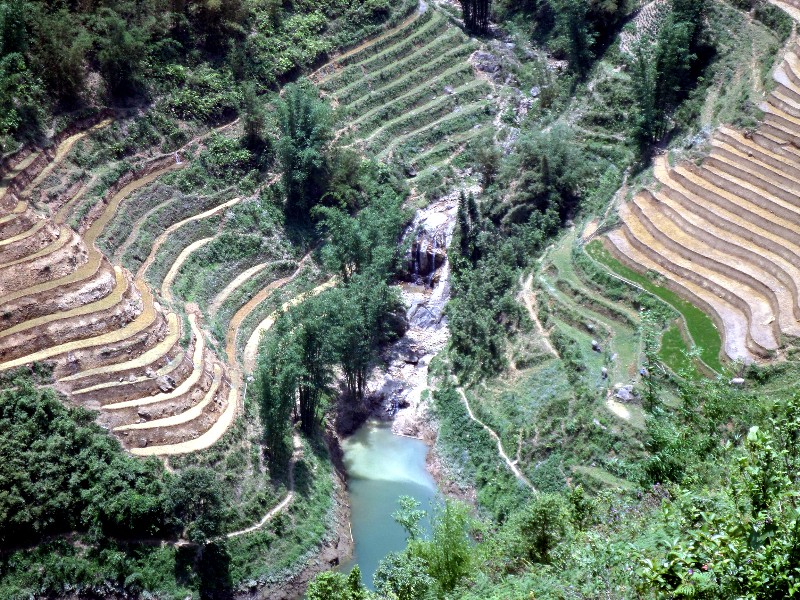 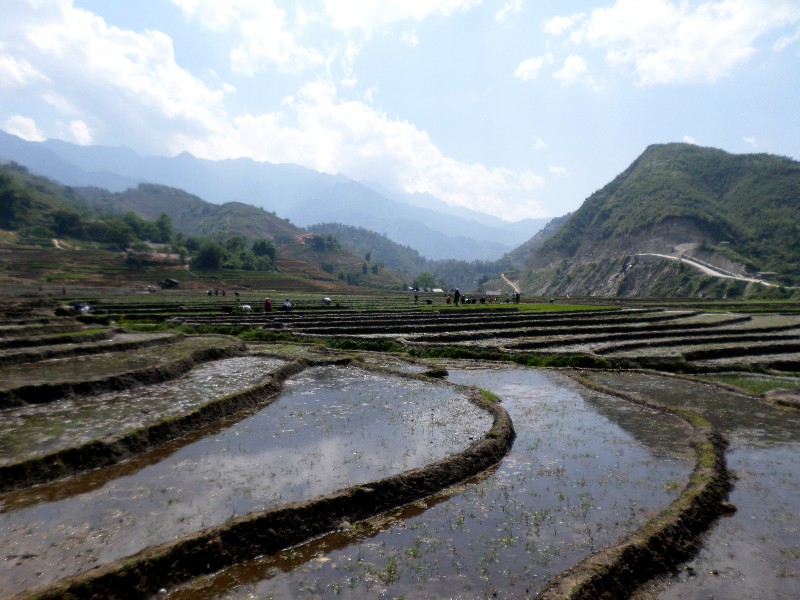 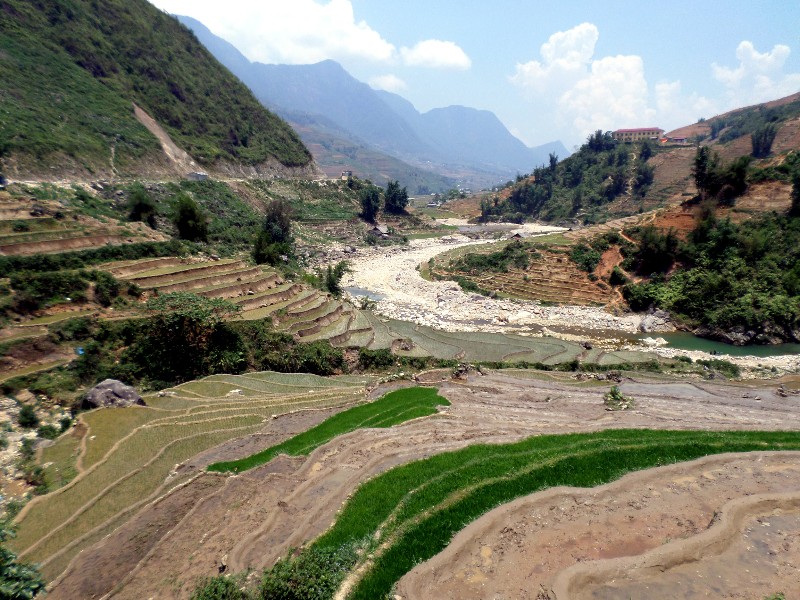 We walked through the villages of Lao Chai and Ta Van and saw how the women make hemp and fabrics (from huge marijuana fields…) and rice flour. The group made things feel a bit touristy, but the people made you feel welcomed and not like you were intruding, which was really lovely. 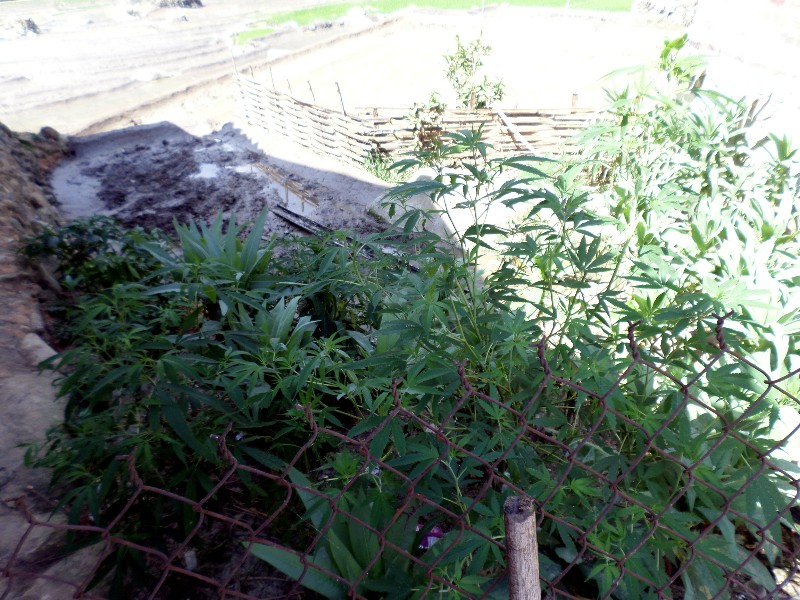 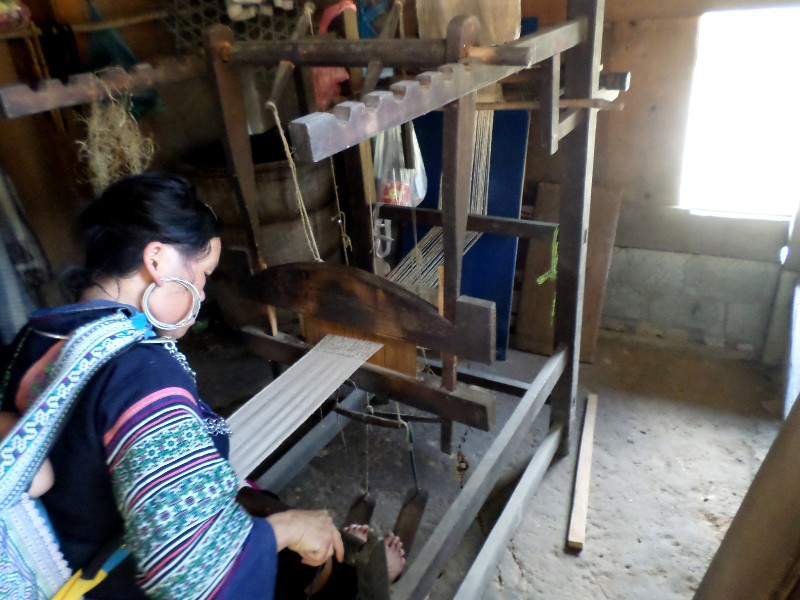 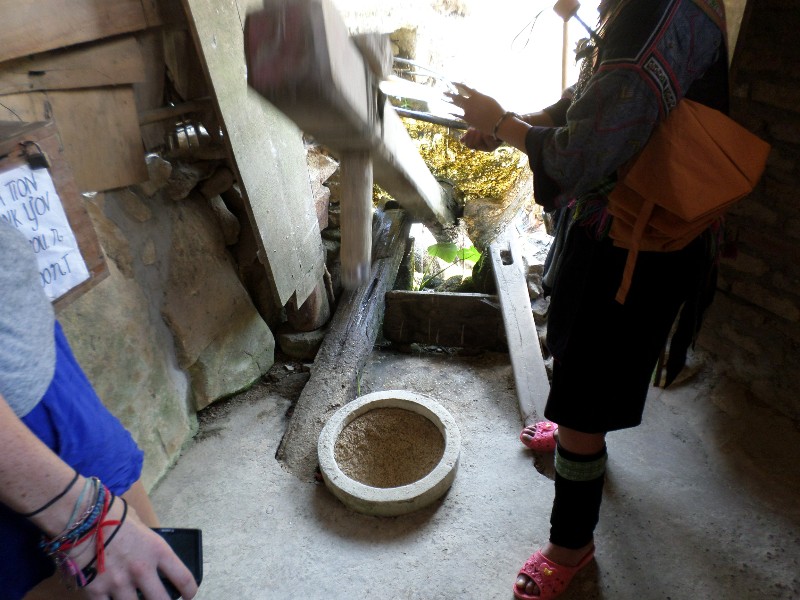 We eventually reached out Homestay – which wasn’t Sue’s house or family, which was a it confusing. The hosts cooked a delicious meal for us, but other than that we had no real interaction with the actual family, just Sue. It was a sleek production and did, at times feel a little fake. But Sue was so nice it kind of made up for it…

After a few drinks we all slowly retired to put individual beds covered with mosquito nets. Unfortunately, when I woke in the middle of the night, I found that I was not alone in my net, and a well defined patterned black and white spider had built a web around me… I slowly and carefully moved all of my things out of the bed then slipped under the net. I tucked the net back under the bed and defeated, I went and slept in another bed (after a long check to make sure there were no spiders in that one too!).

The following day we were and had pancake breakfast before starting the trek to Ta Chai village. The morning was very foggy, more like we were inside a cloud, but it made for some awesome photos… 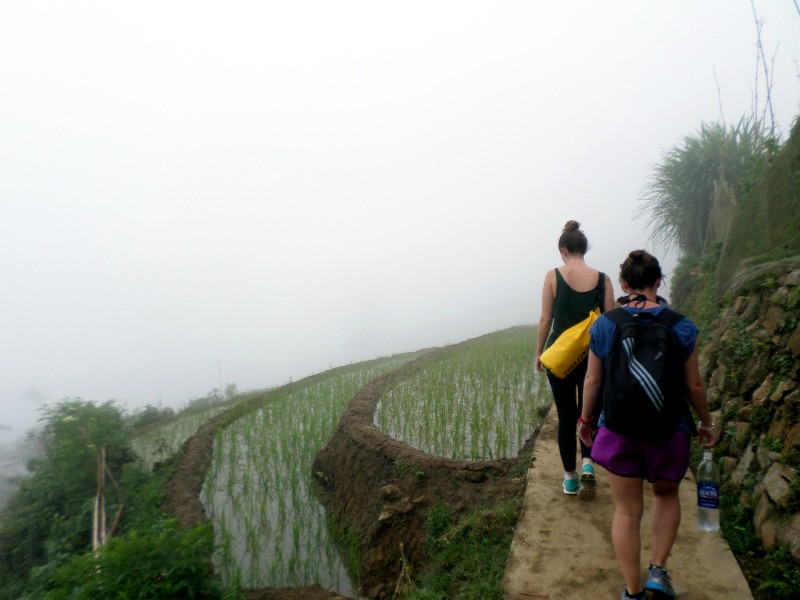 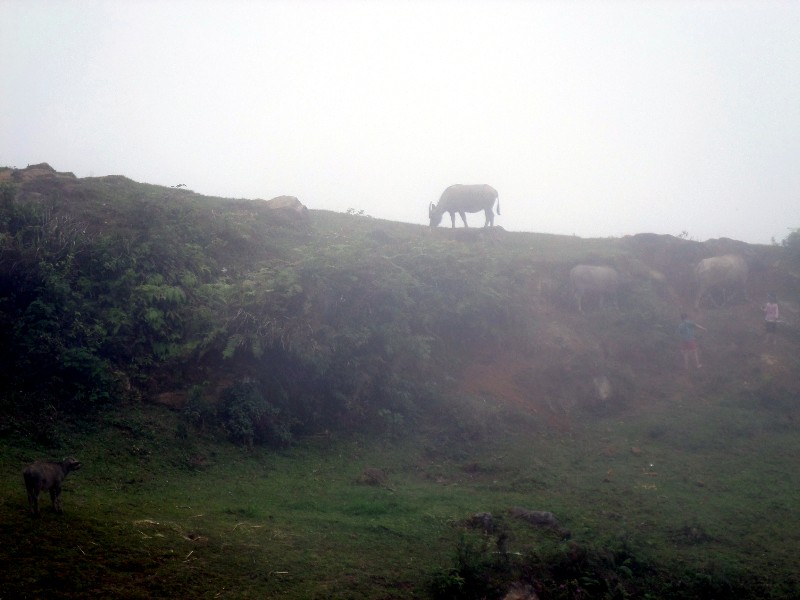 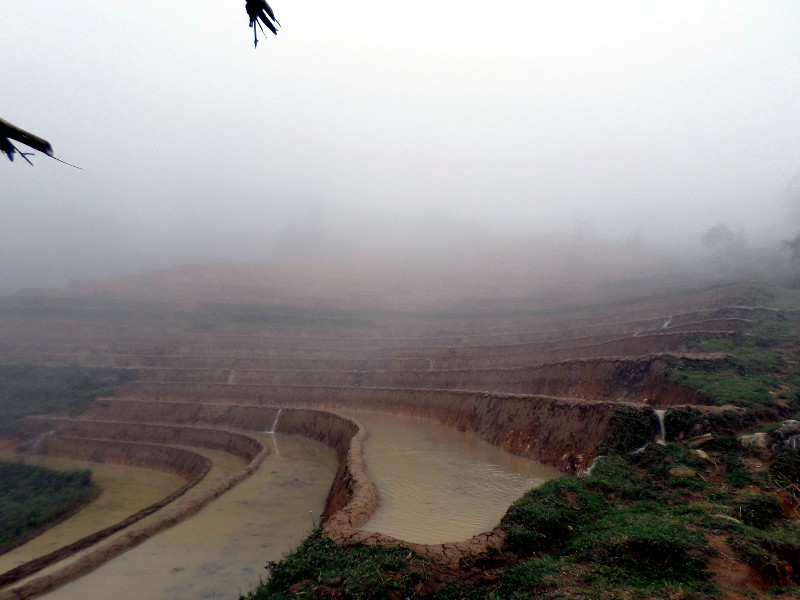 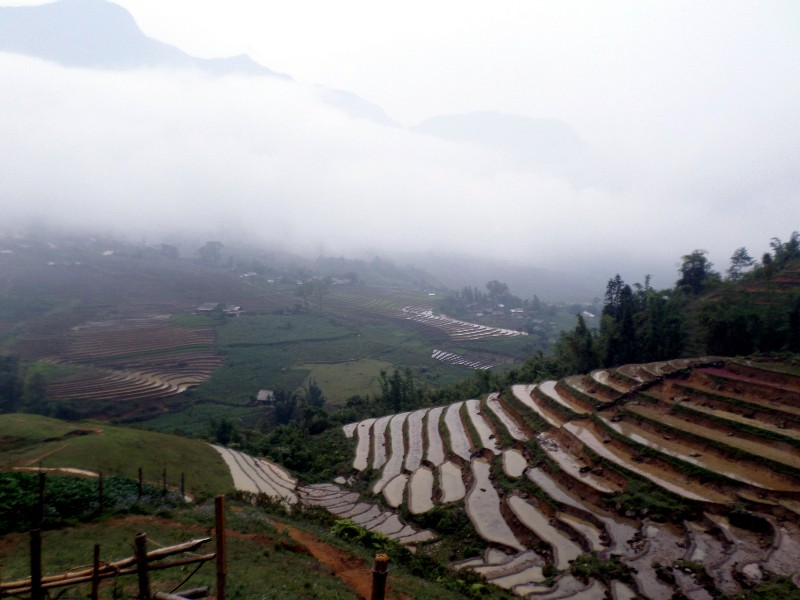 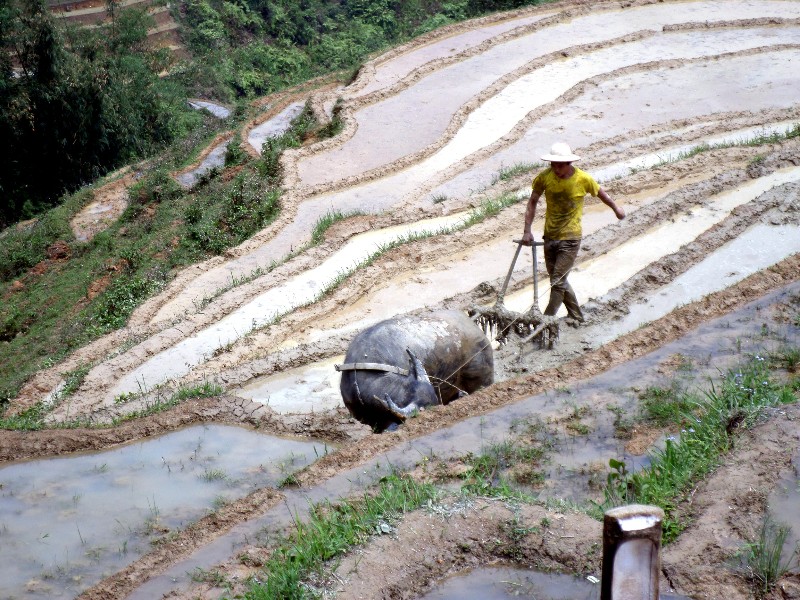 We continued on up towards a tall waterfall, from where we could look out onto the terraces. 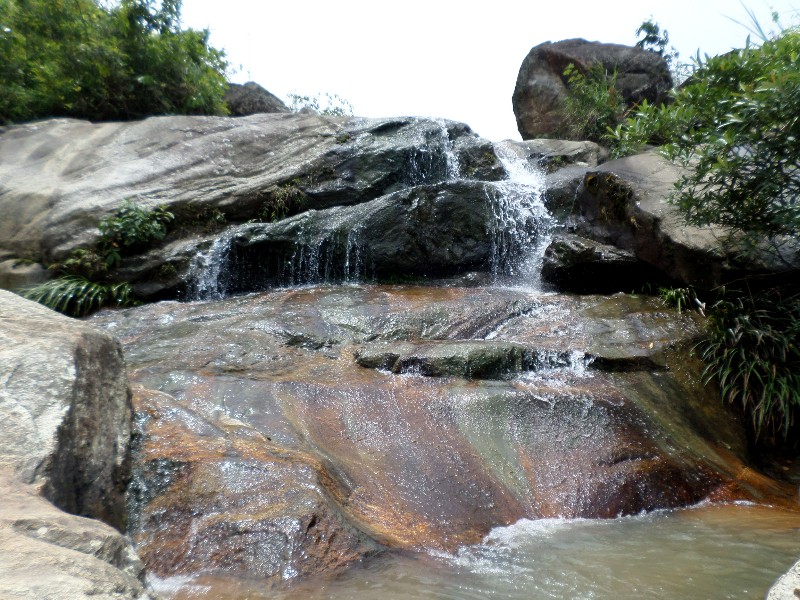 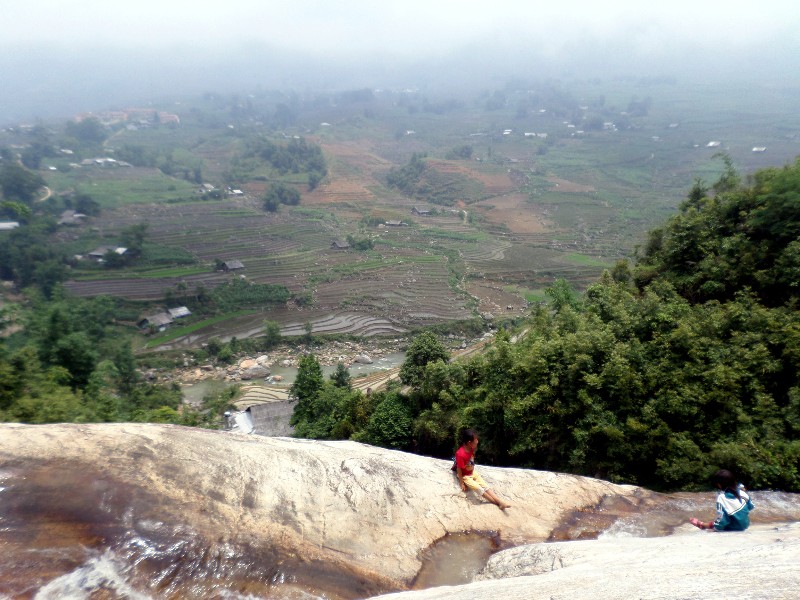 We then crossed the river and entered the village, where a minibus took us back to Sapa town. 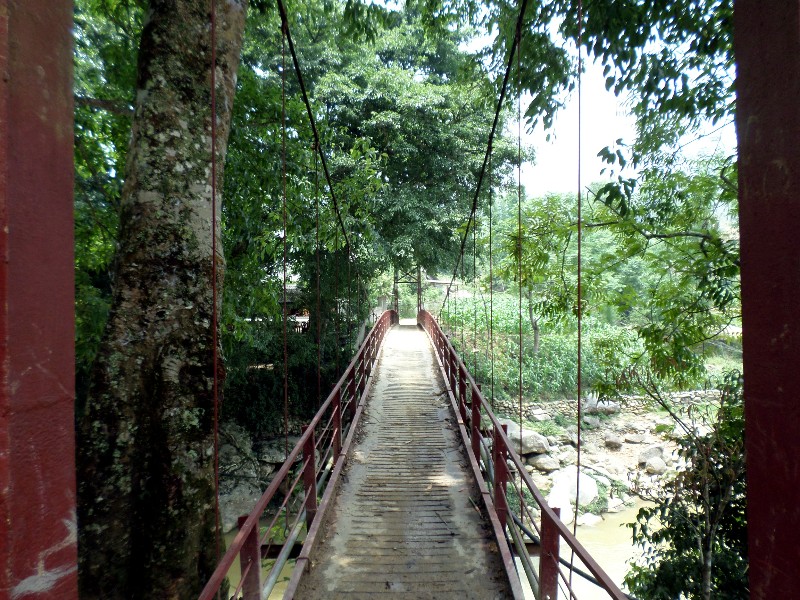 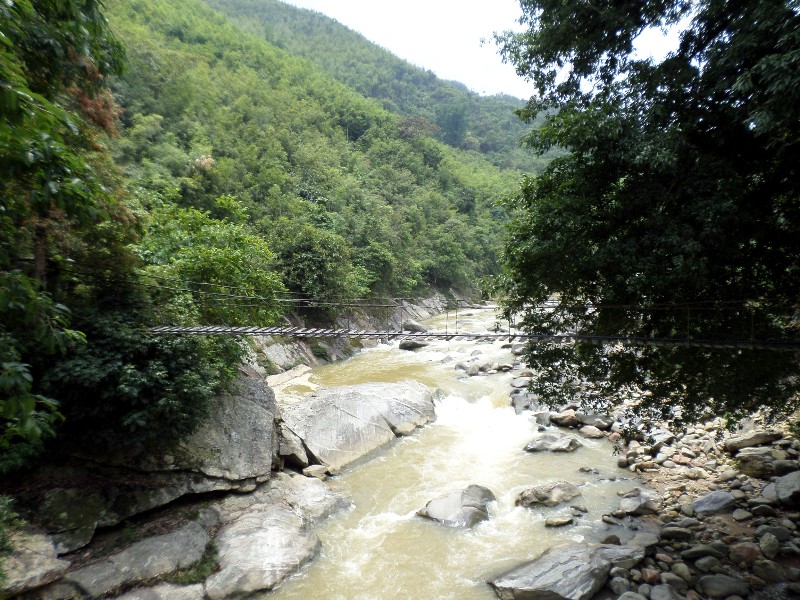 I decided to extend my trip one more day and so stayed that night in a hotel in town and arranged to meet Sue again the following day (on the sly…) to join in the day visiting Cat Cat village.

Unfortunately, this village felt completely staged and fake, and the whole road/path down to the village was lined with tourist shops and hawkers. We swam in the waterfall that was in the village, and watched a traditional dance, before climbing back up the mountain to the town. However, Sue took us cross country to avoid the roads and take the quicker (but much steeper) route.

I took the time to speak to Sue about the fake village. She was pretty blunt about it and said it was, but that’s what people wanted to see. We talked about how in the end, it’s not so bad anyway, at least it helps preserve the culture of these hill tribes. 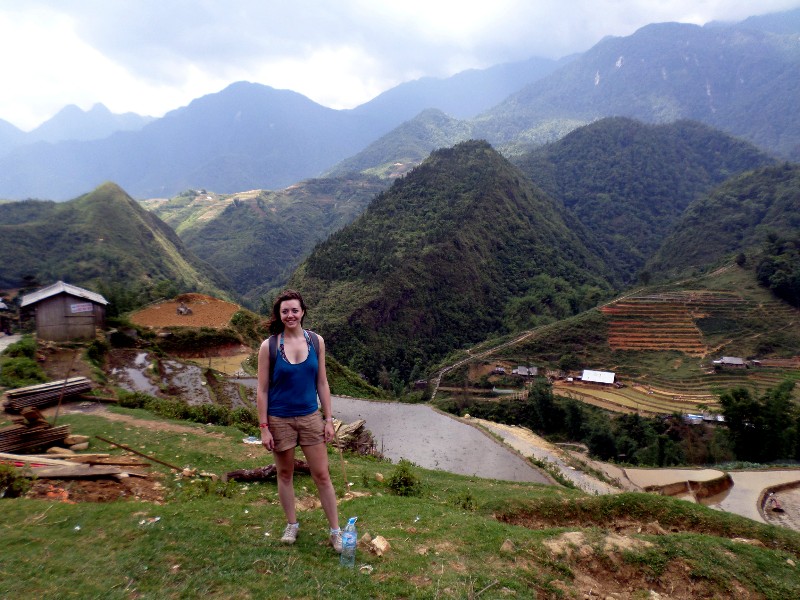 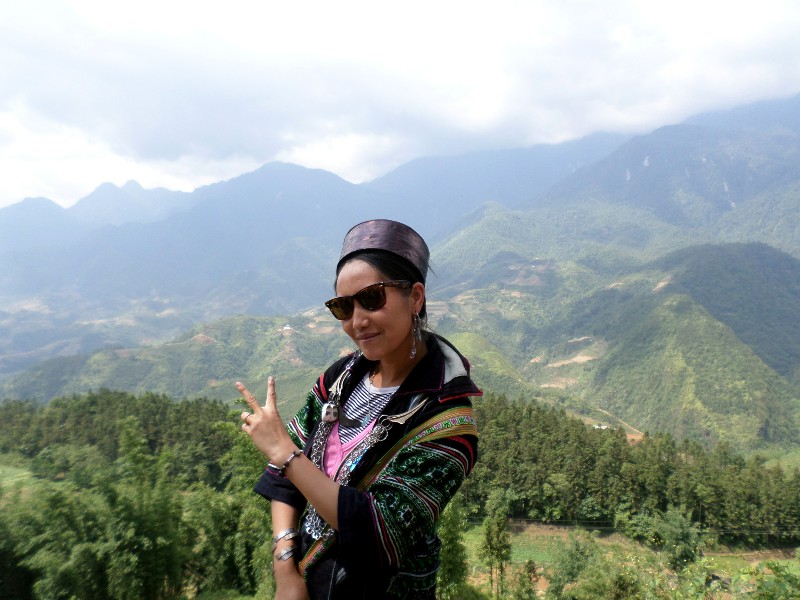 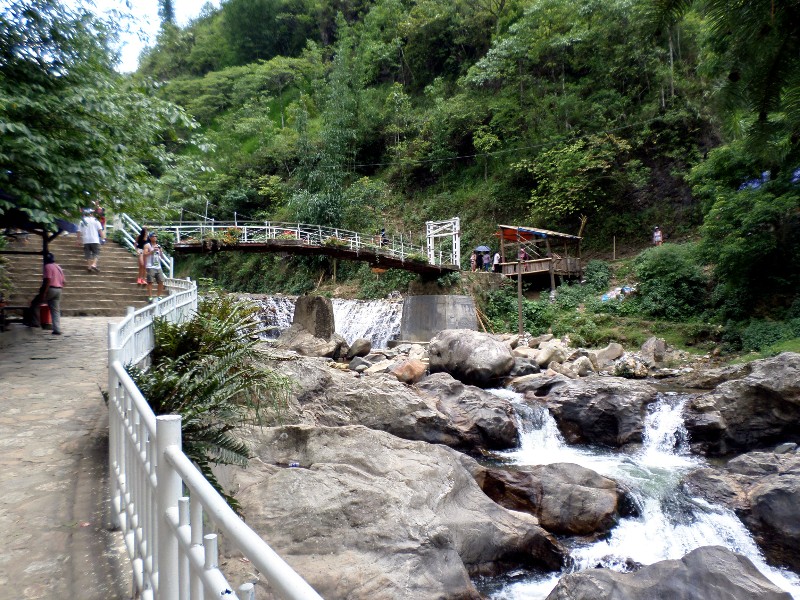 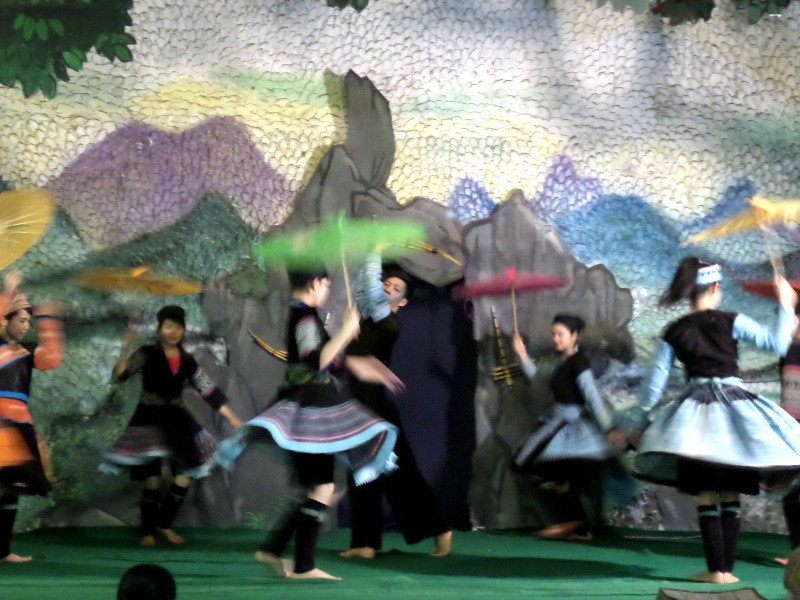 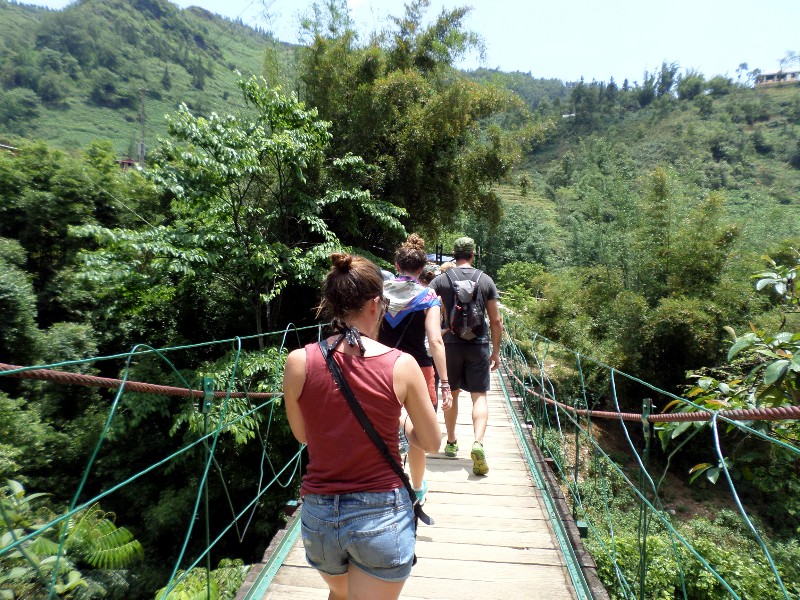 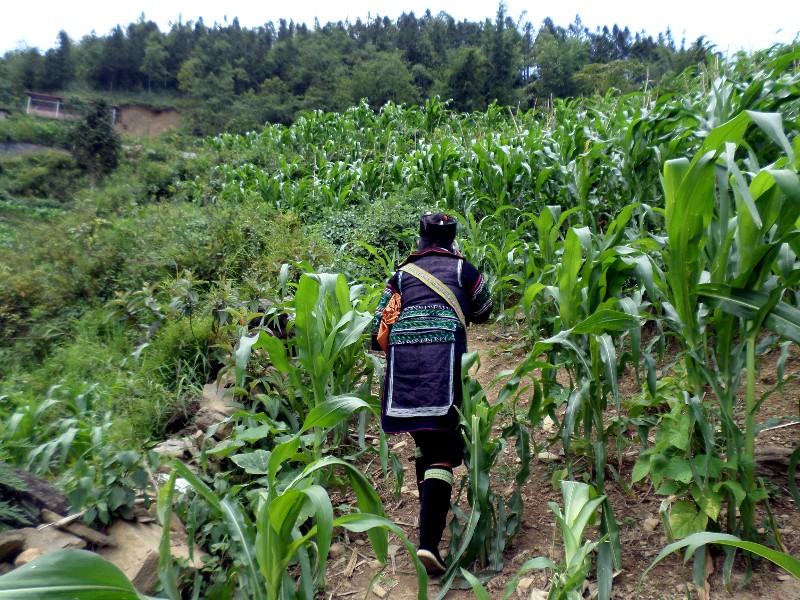 Before the night bus back to Hanoi I treated myself to a full body massage, which was amazing and really helped after all the trekking.

The bus back to Hanoi, I slept the whole way… perhaps it had something to do with being at the front, on a bottom bunk, in the aisle! …you live and learn…

When I arrived in Hanoi I repacked my bag and threw out a lot of things! Living for the last 4 days with my day pack and only a handful of things really changed my attitude, although I still have my hairdryer and epilator! Hahaha