The 26 hour journey from Vientiane to Hanoi was surprisingly fine! We were on a very local bus, with only myself, Sean and a Canadian couple; the rest Vietnamese. But everyone was very friendly and considerate, especially during one of the toilet stops where the only place for a lady to go was behind the coach! The border crossing from Laos to Vietnam was bizarre; the bus arrived at the border around 4am and we parked up and slept on the stationary bus until 8am when the border opened. We first had to get our exit stamps from Laos, then walk for around 20 minutes over a bridge and through the valley to the Vietnamese entry post, where our bags were x-rayed and our passports stamped again!

Back on the bus, we arrive in Hanoi around 7pm, and after a great first food experience, had an early night. I checked into May De Ville hostel, which was beautiful, like a hotel, with great views from the 10th floor restaurant. 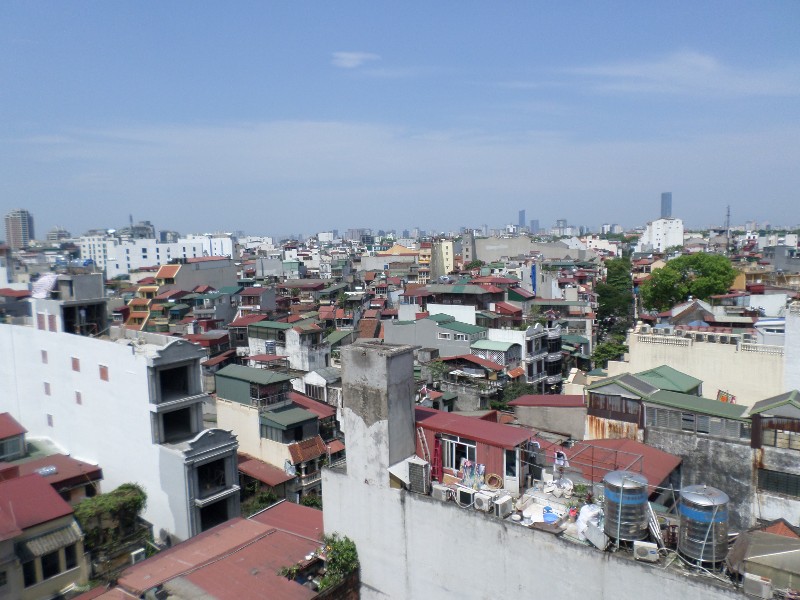 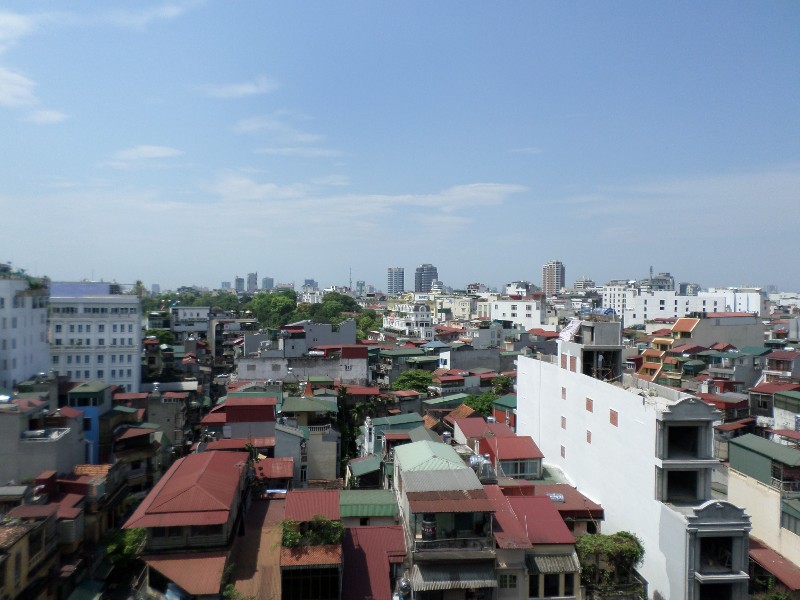 The first day we walked to the lake in the old town to visit a Chinese style temple which was reportedly home to a very old tortoise! We also visited the museum of war, Vietnam has a very strong history of war, with many victories and defensive strategies which make the Vietnamese very proud. Unfortunately I didn’t take many photos as my camera ran out of battery 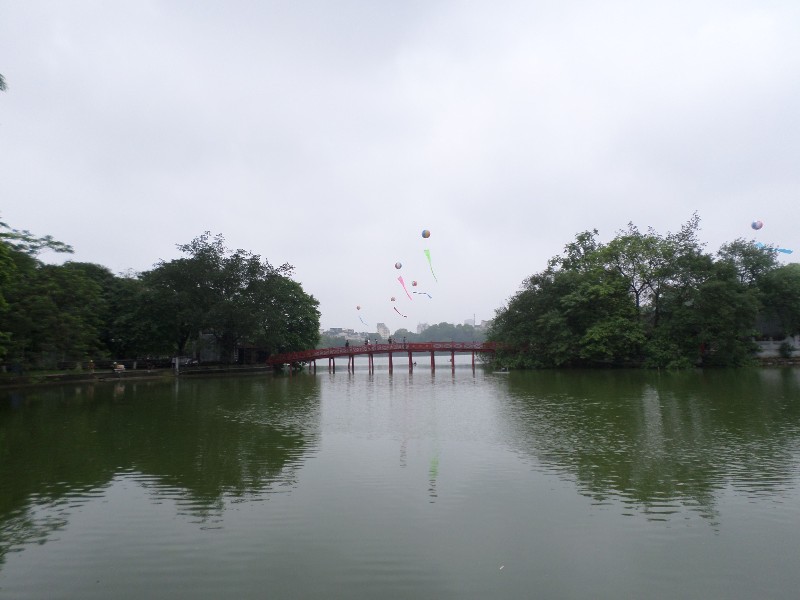 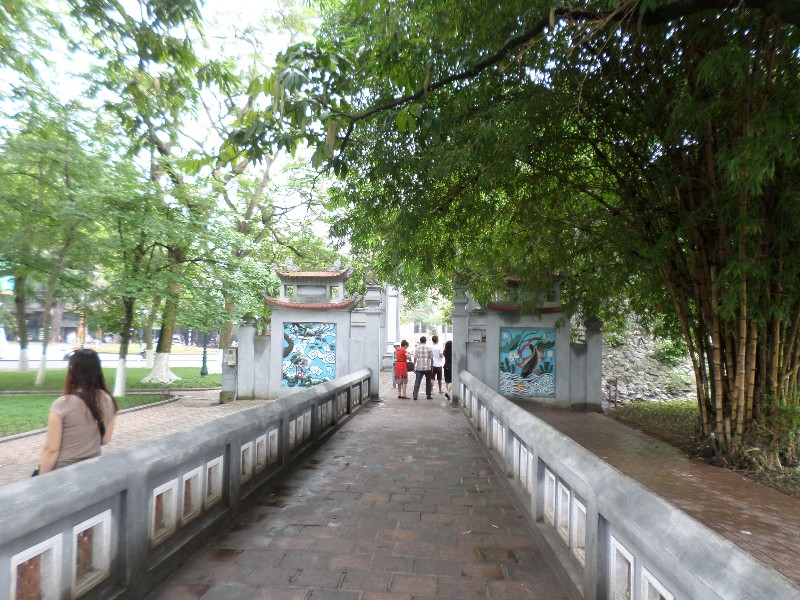 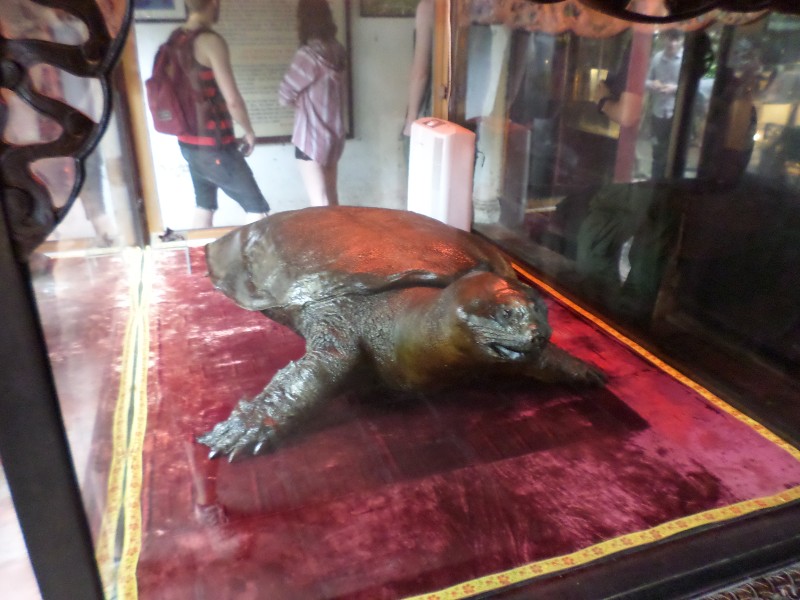 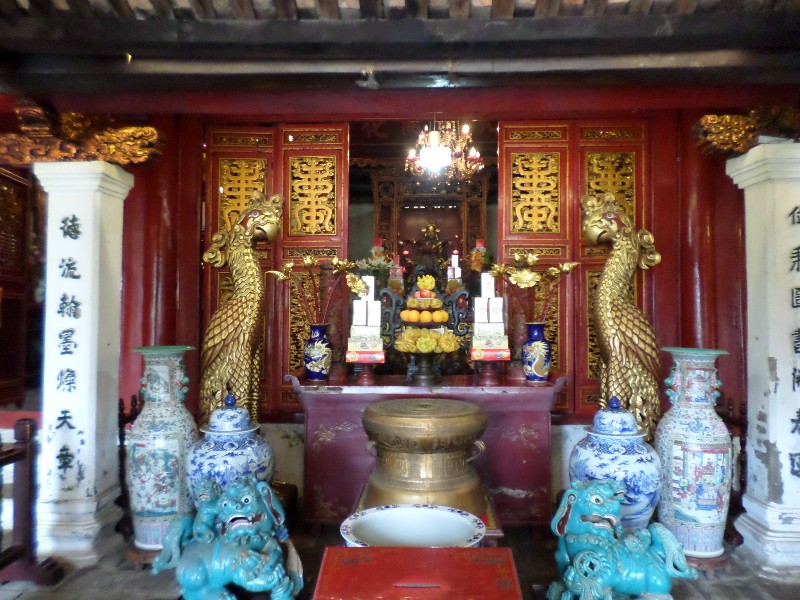 We ate a food called Bun Cha for lunch, which is possible now my favourite food! Pork meatballs and rice noodles and a sauce which is sweet and salty with thin slices of green papaya… delish! After a nap and a few frames of pool we went back out to eat at a ‘cook your own’ place where you get a paraffin fired hot plate, garlic marinated beef and courgette and onion to cook at your table, it was delicious! After dinner we headed out for drinks and ended up staying out late and spending too much money on alcohol!

The next day, with sore heads, we walked across town to see the Ho Chi Minh mausoleum.
On the way there were walked past a huge lake, in which a man was fishing using what seemed a very simple yet effective technique; on a small raft the man let out a long net following the shore of the lake, he then paddled around the late banging his raft and slapping the water with a bamboo pole. This scared the fish and forced them to swim into the net. We watched this for a while. 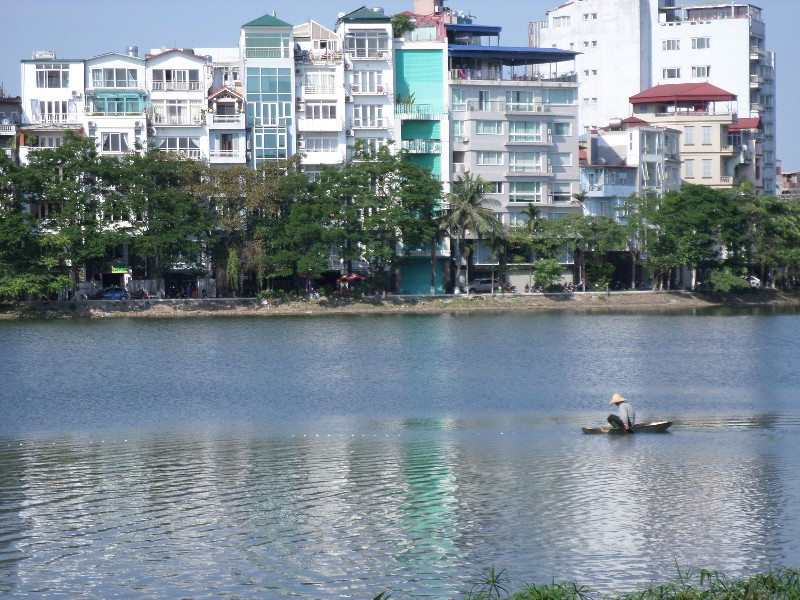 We then saw some people on ladders collecting flowers and I asked what they were for. A man told me that this tree flowers for only one day a year and they pick the flowers to use as good luck tokens and scent as they smelled lovely. We started to press the flowers to keep, but I left mine with Sean!

Almost at the mausoleum we were accosted by a pair of street sellers seeing fruit, who, before we had a chance to argue, dressed us up in their gear and took a photo with our cameras! They then asked for $15 each! We got them down to $1 each, with some fruit thrown in and it was a deal! 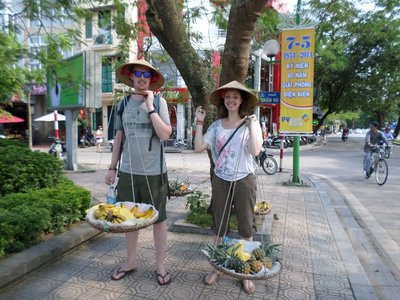 Finally, we reached the mausoleum. Ho Chi Minh is so revered in Vietnam, as the main figure in defence from China, liberation from France, reunification of north and south Vietnam, and both the first president and prime minister of a free Vietnam, it’s not hard to see why. There are temples and monuments dedicated to him in every Vietnamese town, and Vietnamese people pilgrim to Hanoi to pay tribute to his embalmed body housed at the mausoleum. Unfortunately, the mausoleum closes in the afternoon before we arrived, which we didn’t realise, and armed guards patrolled a wide perimeter around the mausoleum and grounds.

Some of the armed guards weren’t too serious though and played with Sean an I by offering us a ‘delicious fruit’ which was so sour and bitter it was horrible… at least they found it funny! We also got winked at by some marching guards, before being told off for taking their photos! 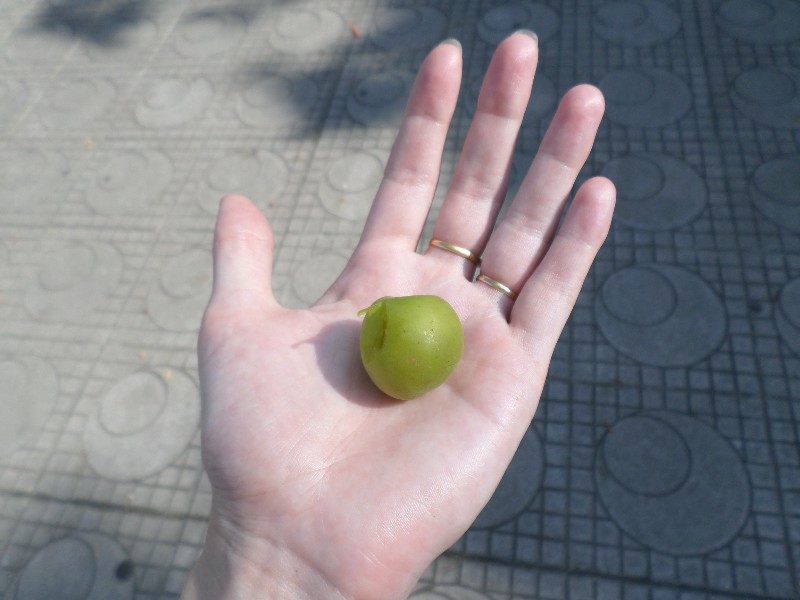 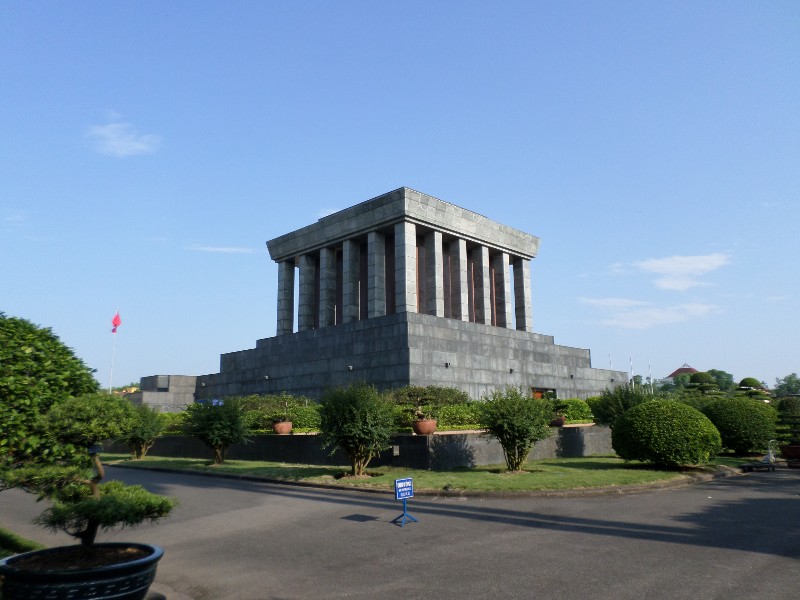 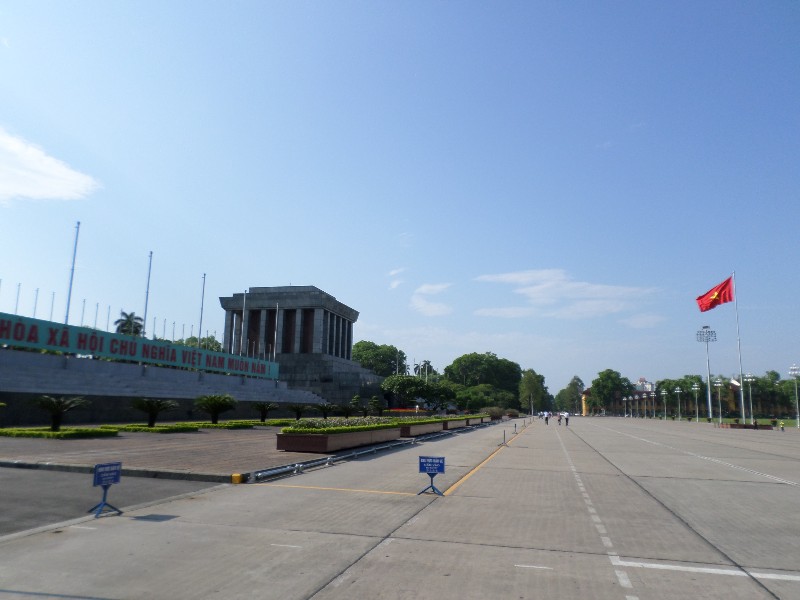 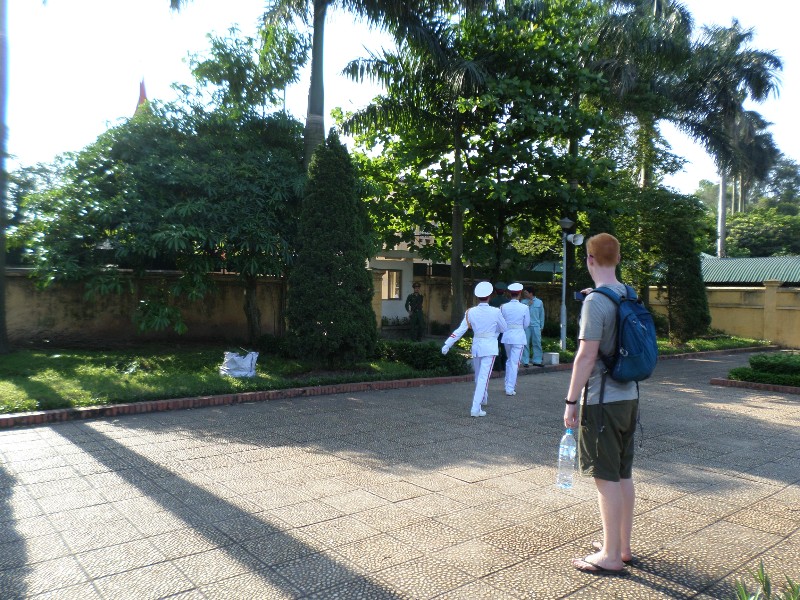 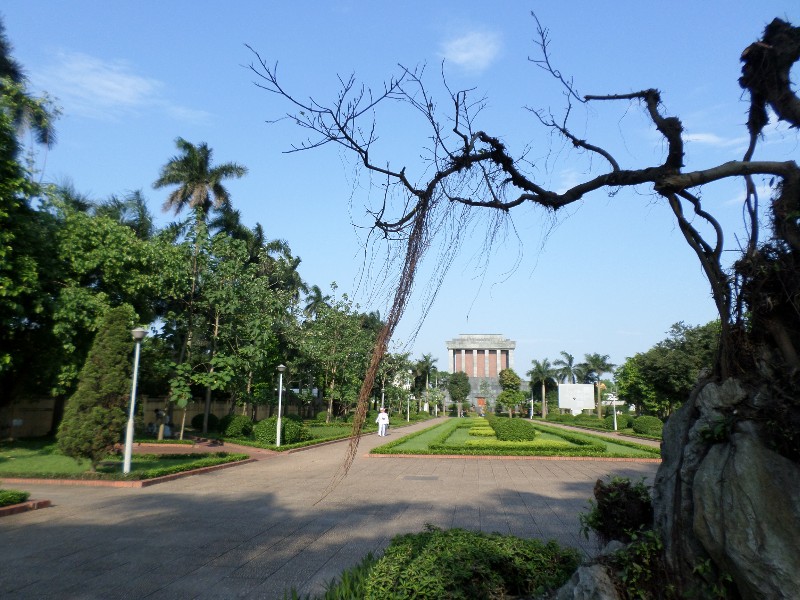 On the we back we discovered Bun Bo Nam Bo; similar to Bun Cha, but with beef and already put together in a bowl. Hanoi food had been the best so far I think! 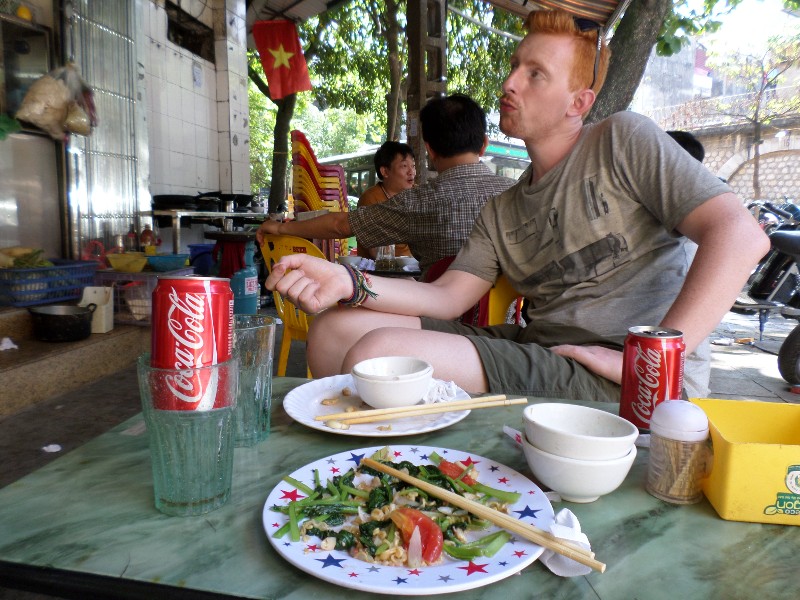 The next day we attempted to make our way to Cat Ba island, however we used the website’s times for departures, which were wrong, and missed the bus by 10 minutes. So we spent the rest of the 40° day in our aircon dorm room watching films and chilling, before topping off Hanoi with another great dish; Luc Lac, basically steak and chips Vietnamese stylee! 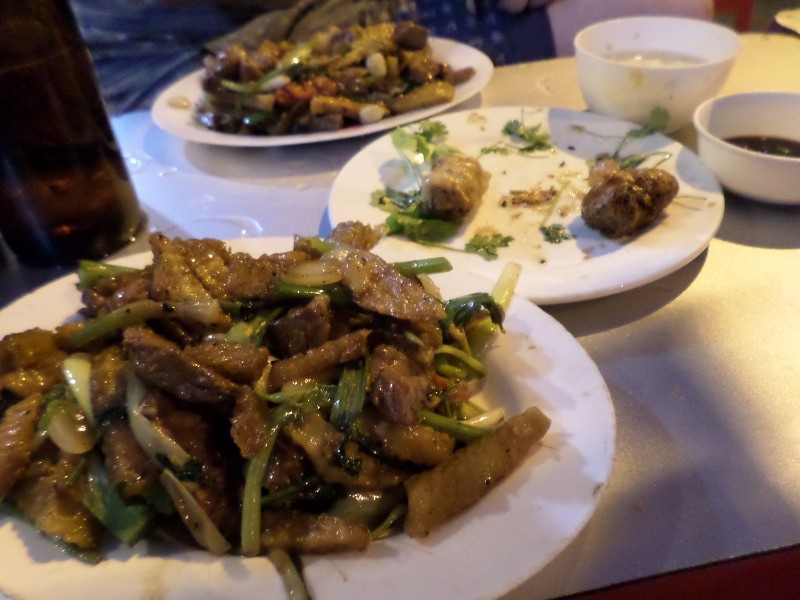 I bought a hello kitty watch at the night market before getting an early night ready to get the bus and boat to Cat Ba the following day!