From Luang Prabang, myself, Sean, Janine, Heather and Lody who we met in the hostel, took a minibus down to Vang Vieng… a very winding route through the mountains and valleys. The journey was tough for me since my seat wasn’t properly secured to the ground and I left the floor every time we turned left!! I pinned myself in by pushing against the sides of the van, but it was totally worth it for the views along the way. 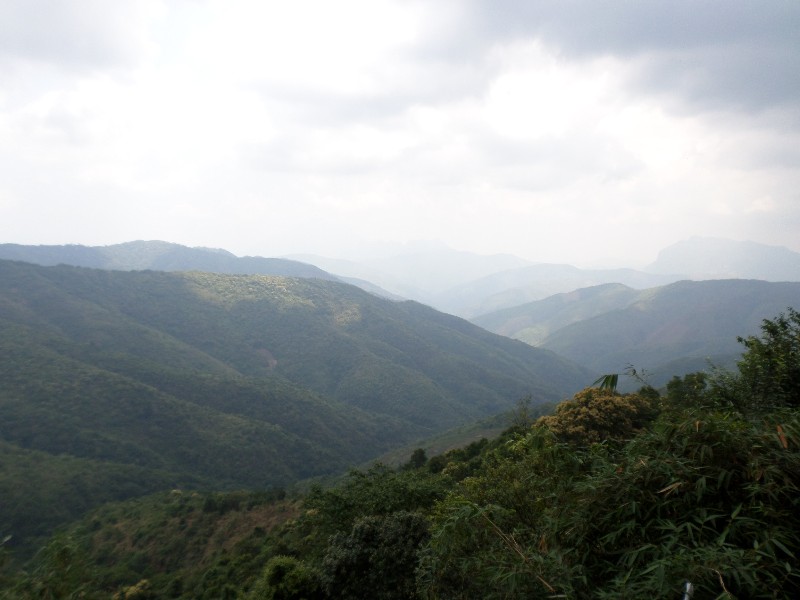 The drive into Vang Vieng was spectacular, the road suddenly became flat, but everywhere you looked, limestone karsts covered in jungle rose from the ground.

Vang Vieng is famous for tubing along the river, and so the next day we hired tubes and drove upriver to the starting point. There used to be 16 bars down by the river, allowing people to do a bar crawl in between the tubing. However, there’s now only 4 bars – which we somehow still managed to spend all day in! We stayed so late in the final bar we had to drive back as it was too dark and dangerous to tube back! 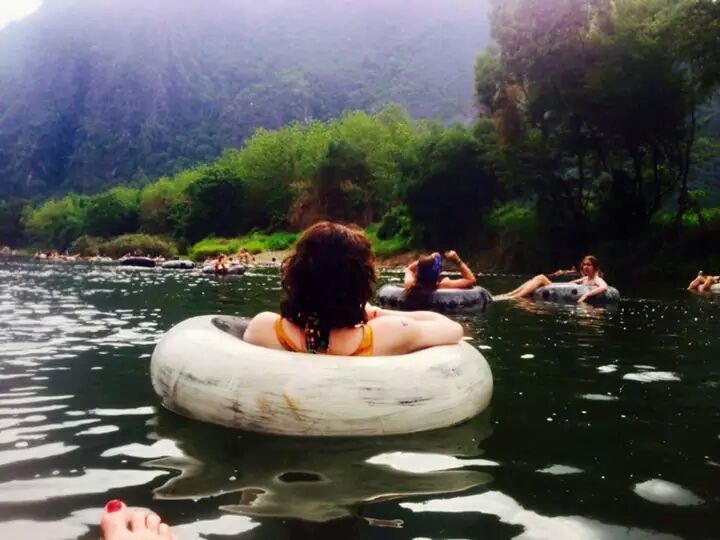 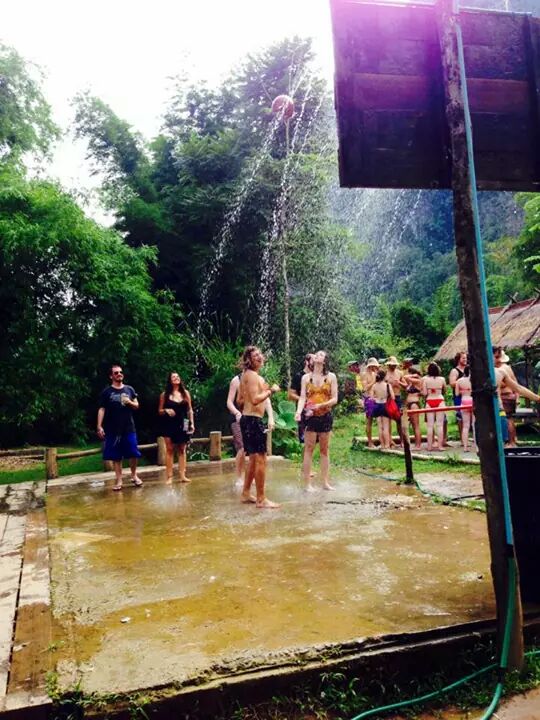 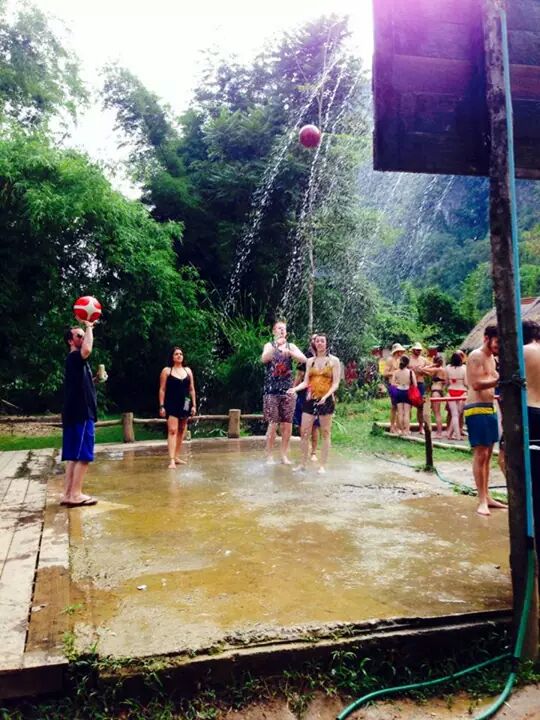 The second day here we hired bikes and cycled out to a blue lagoon where there were a tree and rope swings you could jump in off. The lagoon was cold, but in the heat, and especially after the journey there, it was heaven!

After chilling in the lagoon I eventually plucked up the courage to jump in off the highest branch. I climbed up the tree and stood scared on the branch for what seemed like nothing, but apparently was close to 30 minutes!! I started gathering a big crowd of people cheering me on and then… they started counting down from 10! About 30 people all watching, all counting… I had no choice, I had to jump! It was nowhere near as bad as I thought, and I was not very graceful as I watched the video back that Sean took… but the big cheer I got for doing it felt amazing, if not a little embarrassing that I took so long! 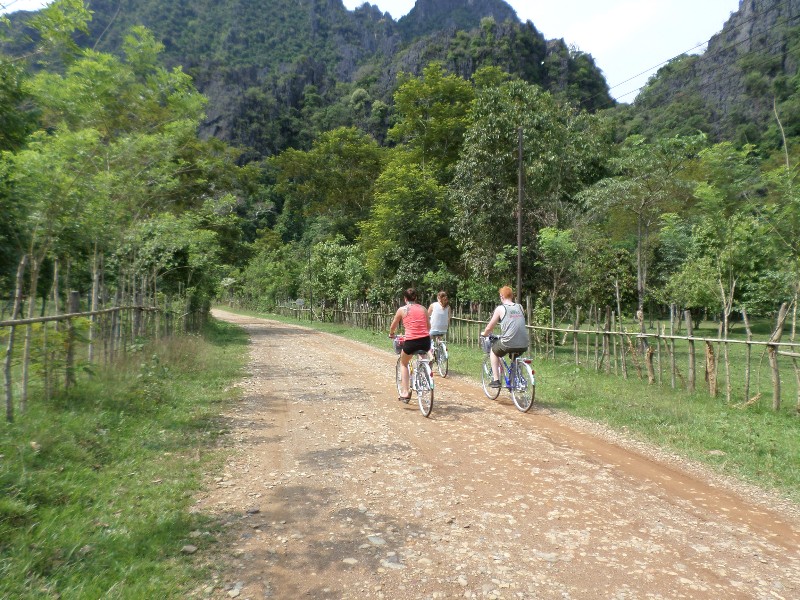 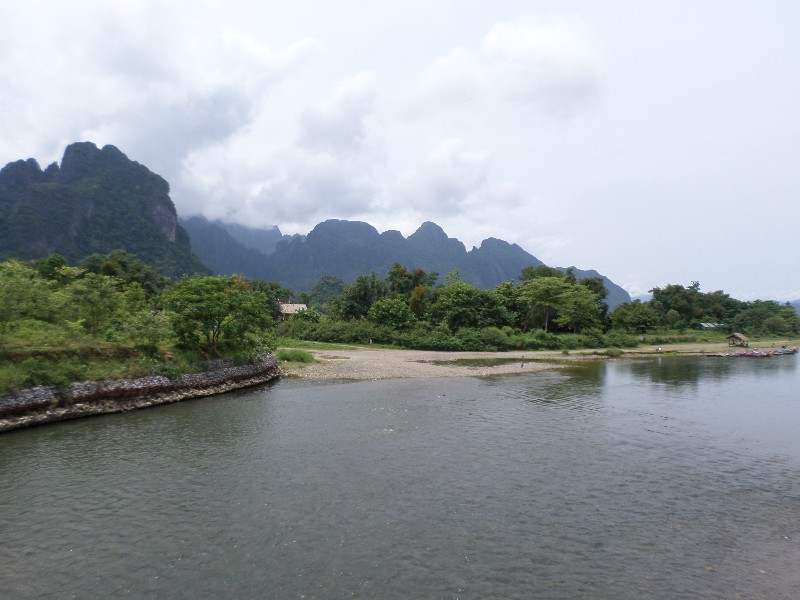 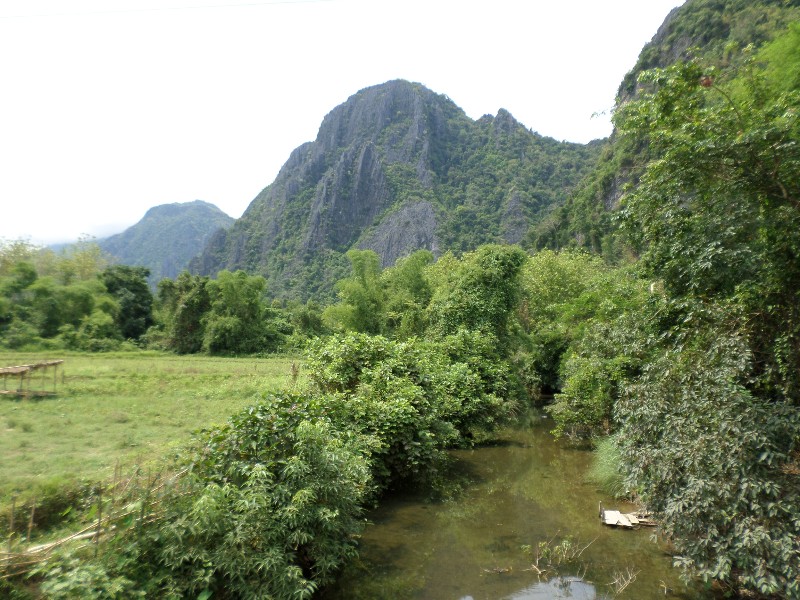 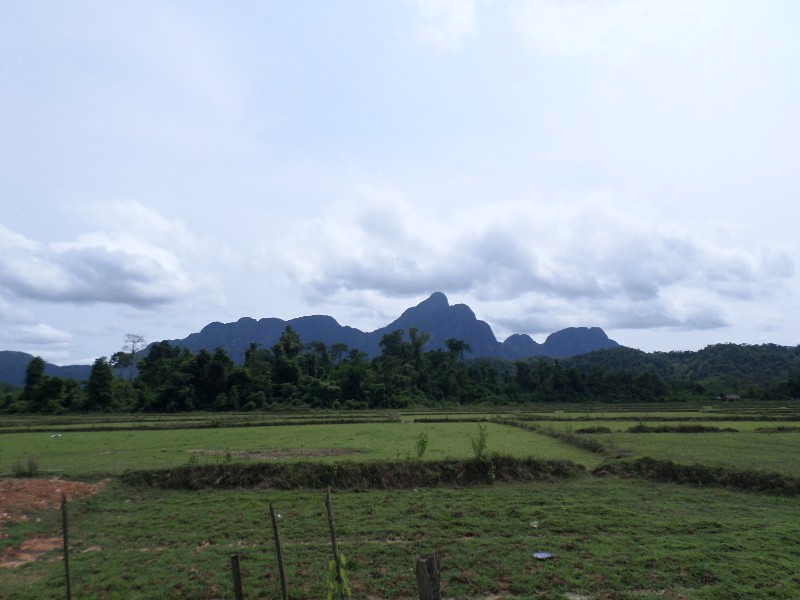 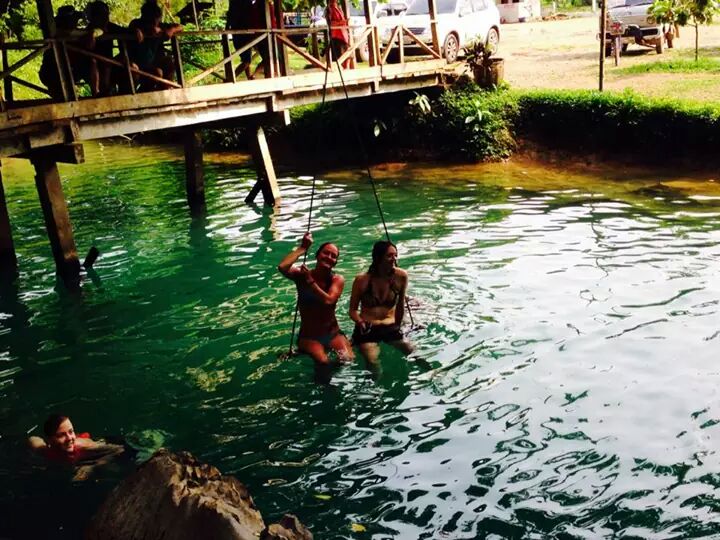 After some food, we hiked up the mountain behind the lagoon to a nice cave. Although we didn’t go far as we had no torch and were wearing flip flops! 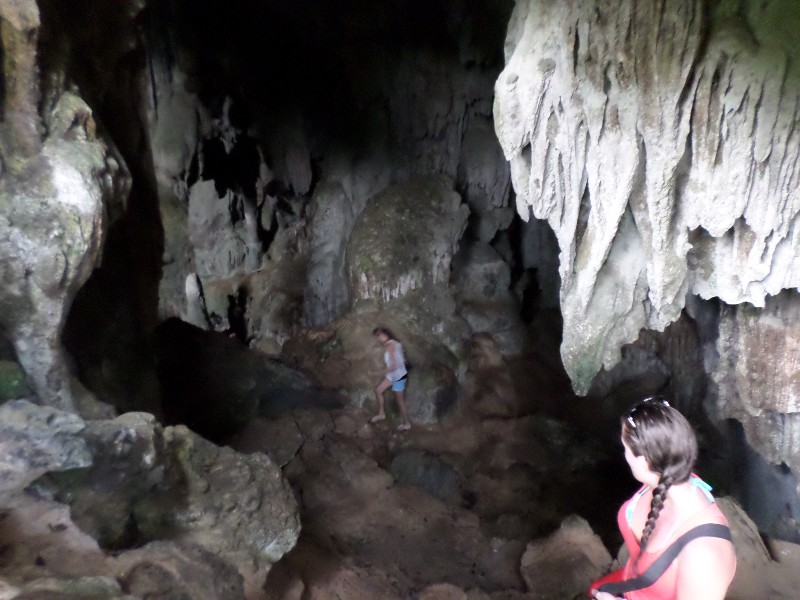 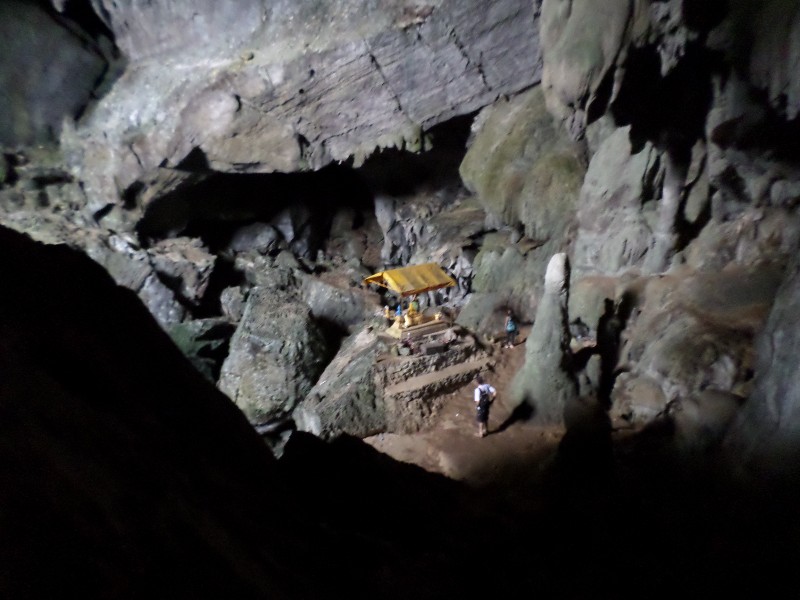 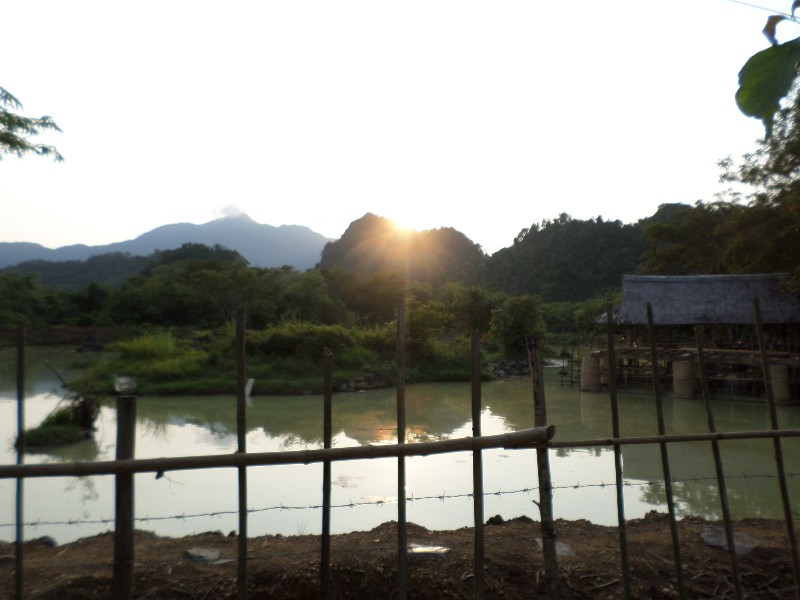 The night we went drinking in the local bars and to the only club open after 11:30, which was awful! But still, we stayed until late.

The next day we attempted to go tubing again. I took less money with me in an effort to drink less and hopefully do the full tubing route, and Sean and I left the final bar with enough time to return to the town in the light. Unfortunately (or luckily for her…) We ran into a very distressed drunk girl who had gotten separated from her friends and was on the river by herself without any phone or money! We did all we could to calm her down and help her, but time was not on our side and it got dark very quickly as we stayed with her to help. The river was shallow enough to stand in comfortably, and mostly didn’t rise above the knees and was slow moving, but the girl was very drunk and struggling a lot. We saw lights from the local fishermen and headed towards them. One of them took us to a place we could get back to the road and from there we flagged down a pick-up truck back to the town centre and walked the girl back to her hotel. Both Sean and I were very shaken by the incident. We think she must’ve had more than alcohol, she was crazy… I don’t think she realised how lucky she was that we found her, as there’s no way she would’ve made it back to town without our help…

We took it easy for the rest of the night…

So far travelling I haven’t experienced any problems, thefts, danger or injuries (touch wood); I have been very lucky, but also very careful and measured. Seeing that girl made me realise how easy it is to put yourself in danger… I’d like to think that I’d never let myself be in a situation like that.