Sean and I got up early on Tuesday morning to catch a mini bus to Chiang Khong; possibly the scariest road journey so far, as our driver carelessly selected songs to play over the speakers on YouTube as he raced dangerously in the middle of the road!

In Chiang Khong we crossed the border into Laos, Huay Xai, where we boarded a large slow boat for a 2-day to Luang Prabang.

The scenery on the boat was incredible the whole way, but the boat was a total tourist trap – however, this did mean that we were able to meet lots of people and I made a lot of friends very quickly! 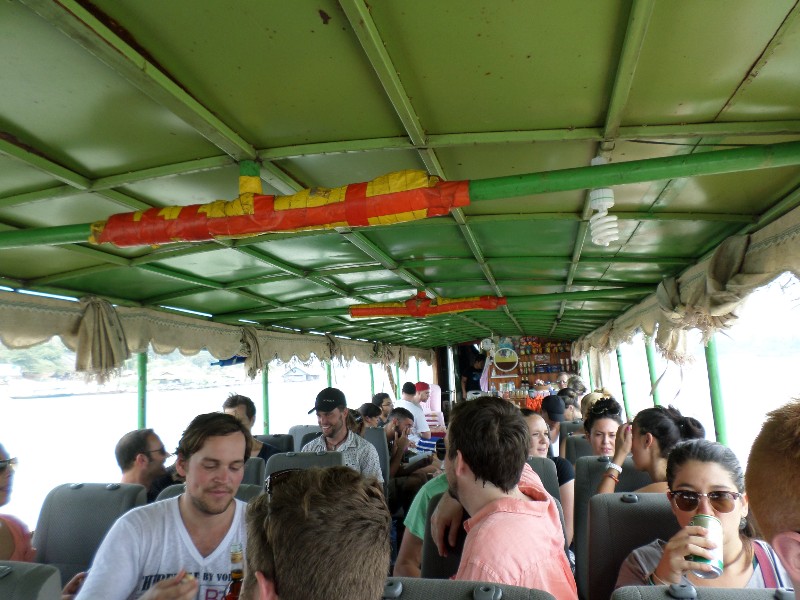 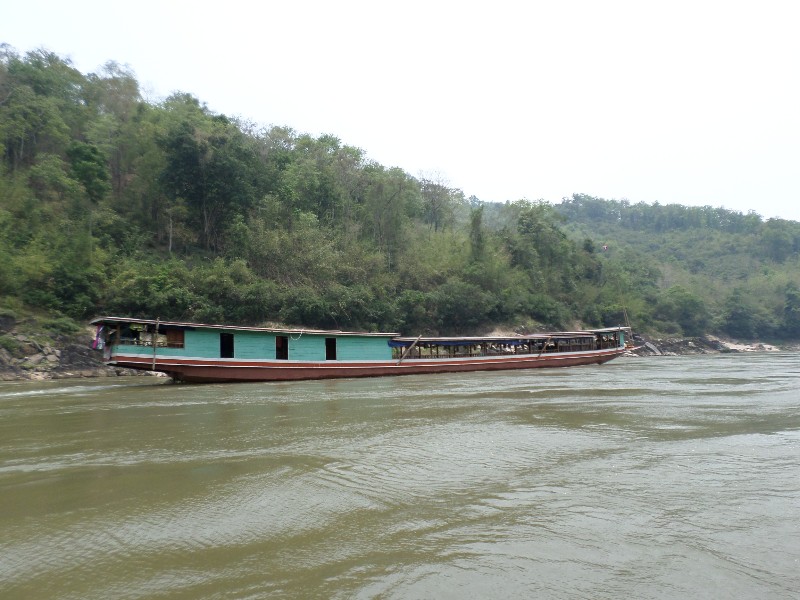 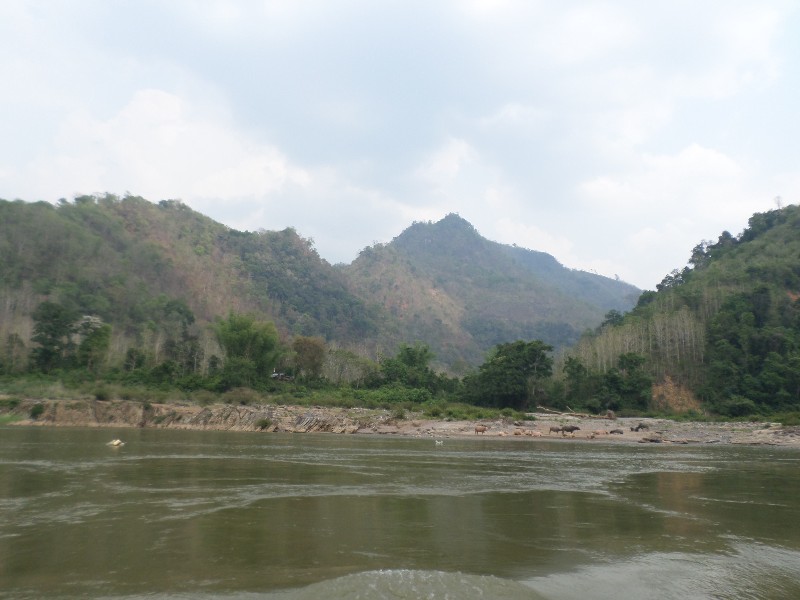 After a long journey, which included 5 hours on the slow boat, we arrived in our stopover destination, Pak Beng. The pumpkin and buffalo curry that I had that night was probably the best Laos meal I had! But it arrived late since the town experiences power cuts frequently, and there were 2 that night!

The following day we had 8 hours on the slow boat, which was tiring, but luckily the scenery stayed beautiful.

Once in Luang Prabang, myself, Sean and some people we’d meet on the boat, headed to Khammany Inn, a very busy backpackers hostel. The night market of Luang Prabang was great, although the phrase ‘same, same, but different’ was used by many of the locals and shop owners. We could see why, menus, shops, tours, hostels… they were all extremely similar. A lot of the stalls also sold exactly the same things. I caved one night and bought some generic ‘traveller pants’ – hareem trousers in bright funky designed material. Although I don’t think I ever had the guts to wear them!

The food in Laos was odd… sort of Thai, but not as nice, not spicy, lots of baguettes and sandwiches (French influence) and at the night market there were a lot of buffet stalls! It was still tasty, but disappointing compared to the amazing Thai food I’d had so far. 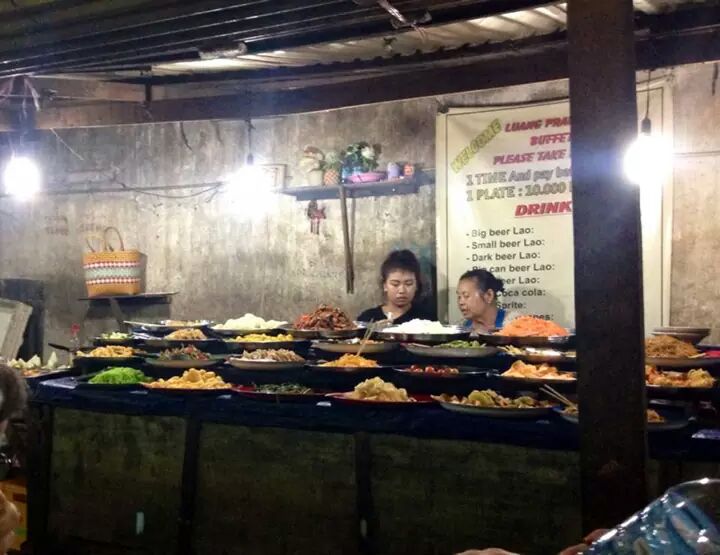 The next day Sean and I went with a small group of people from the hostel into the town. We ate on the riverfront, but certainly paid for the views, not the food!! We continued to the palace museum, former home of the Laos king, before climbing up Way Phu Si for some great views over the town and river. 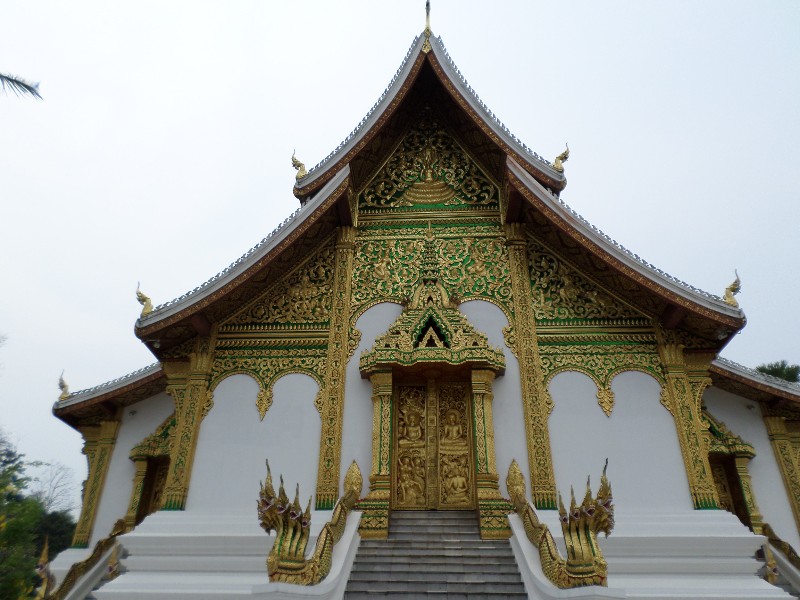 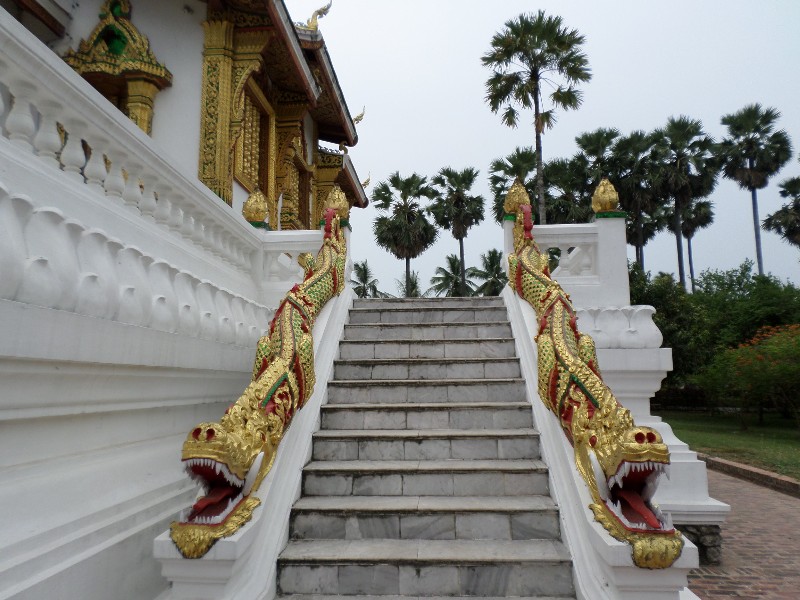 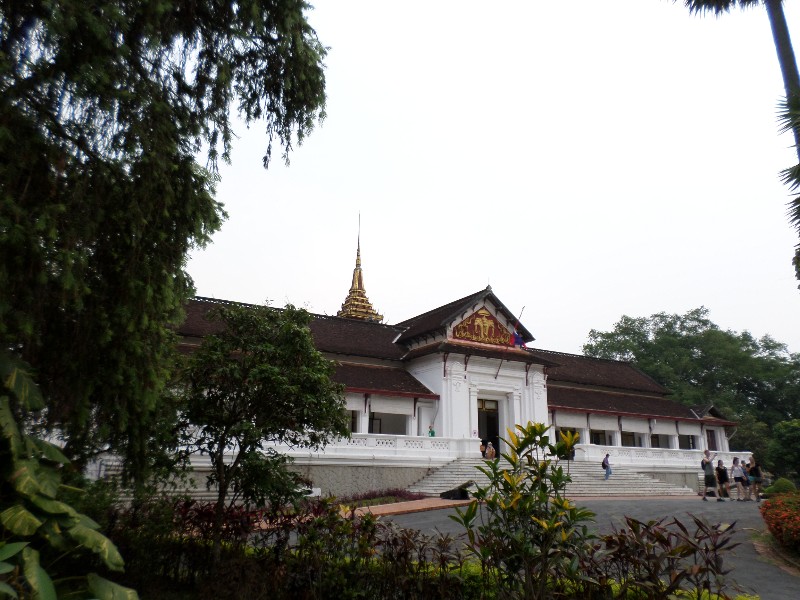 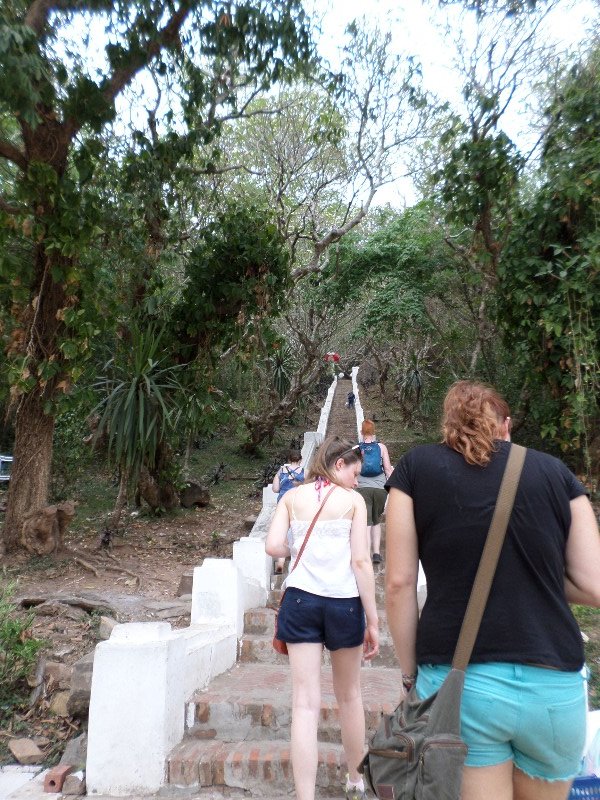 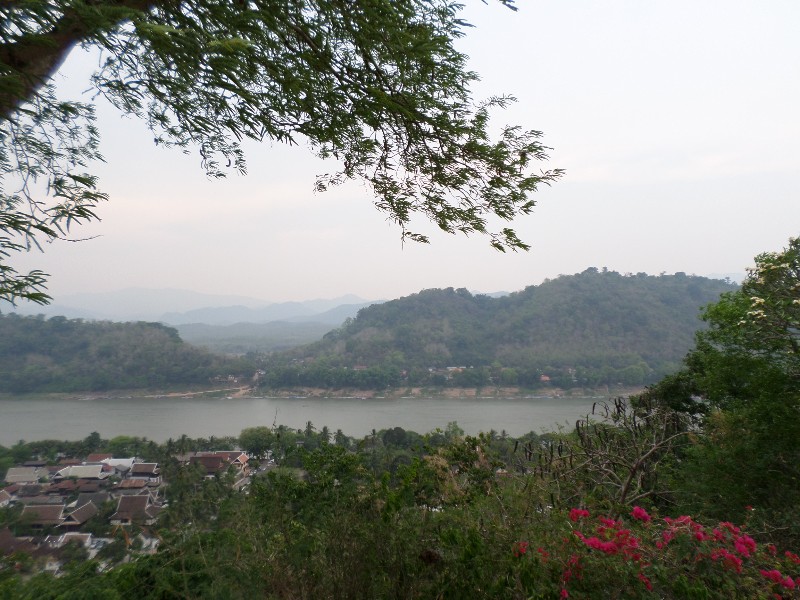 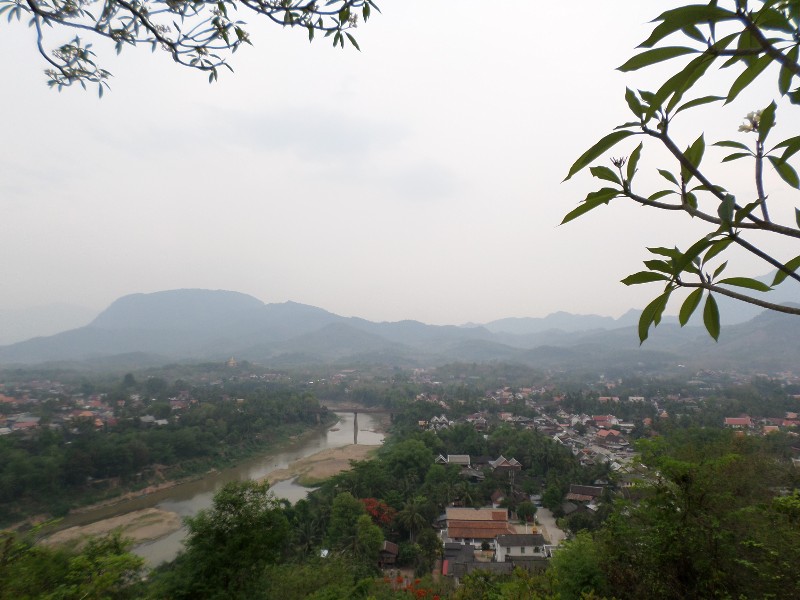 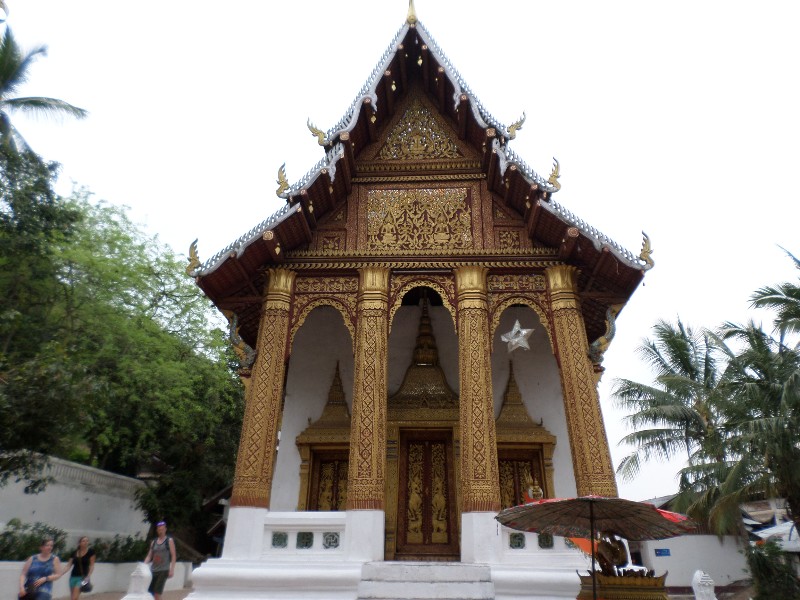 That evening we went for a meal and a few drinks in the town, but there is an alcohol curfew in Laos from 11:30. At this point, all parties in the town turn to the only place open after this, which is the bowling alley!! 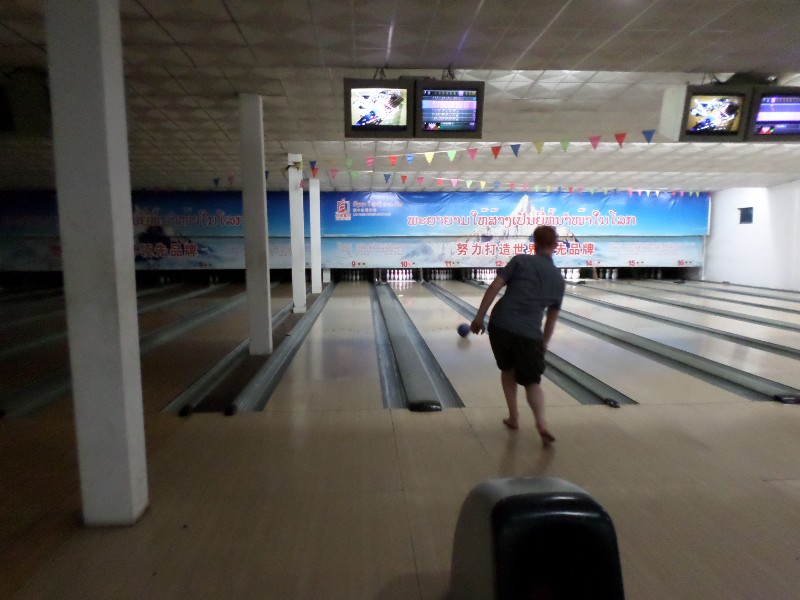 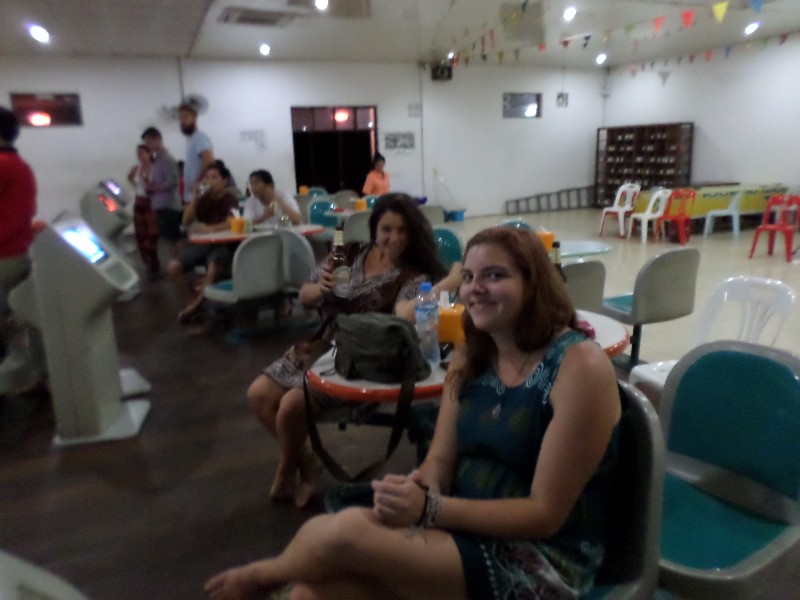 The following day I headed with even more people from the hostel to Kuang Si waterfall by tuk tuk, an in interesting journey to say the least… I only screamed a couple of times as the tuk tuk drove at break-neck speeds!

The waterfall was the most beautiful I had seen so far, the water was an eerie green and the view from the top of the falls was well worth the 30 minute tough steep climb. 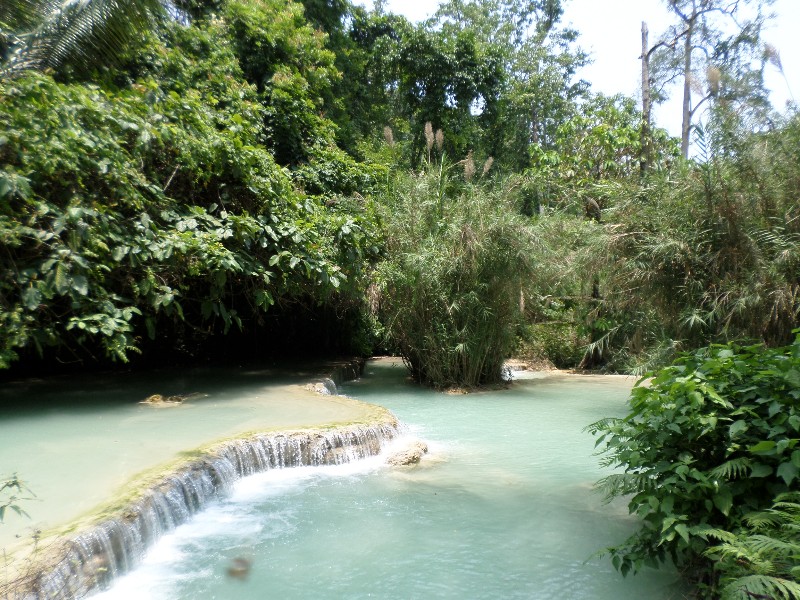 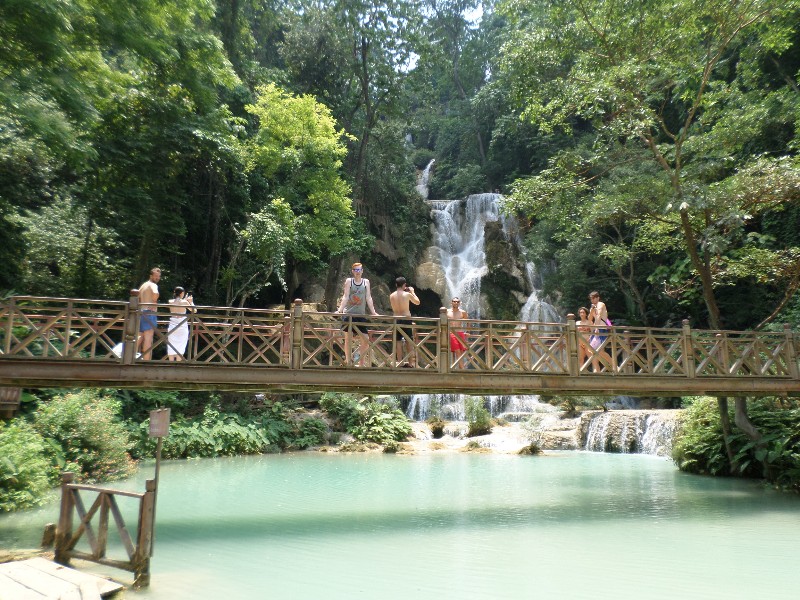 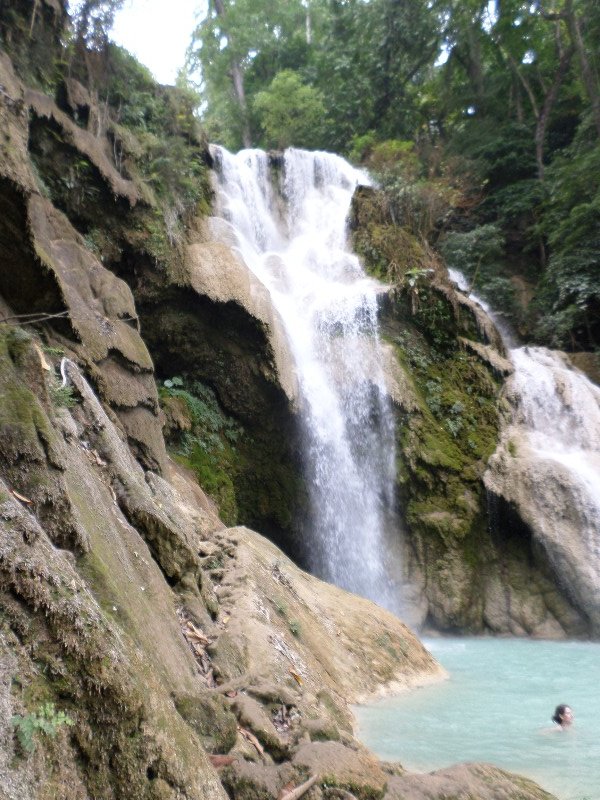 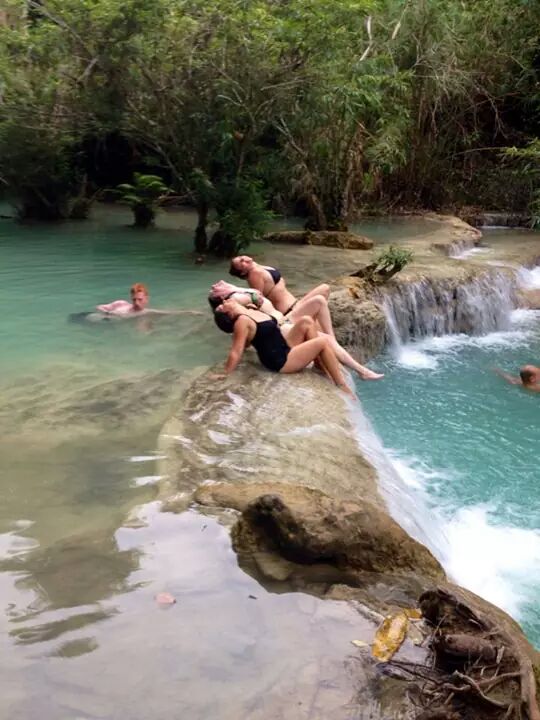 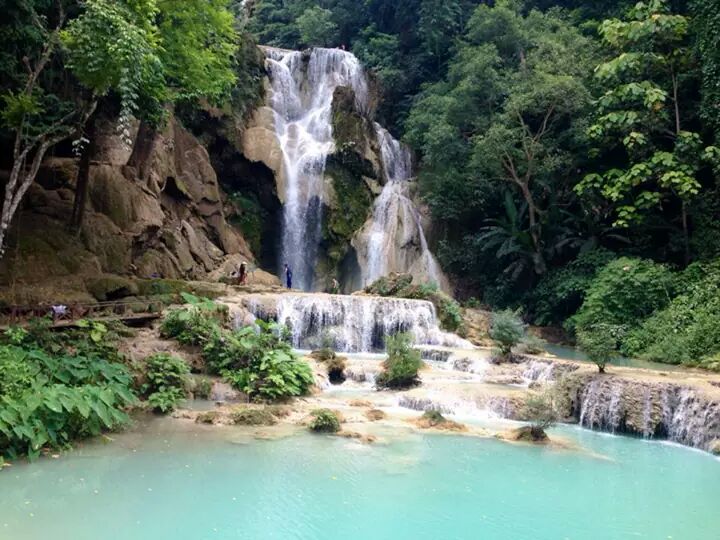 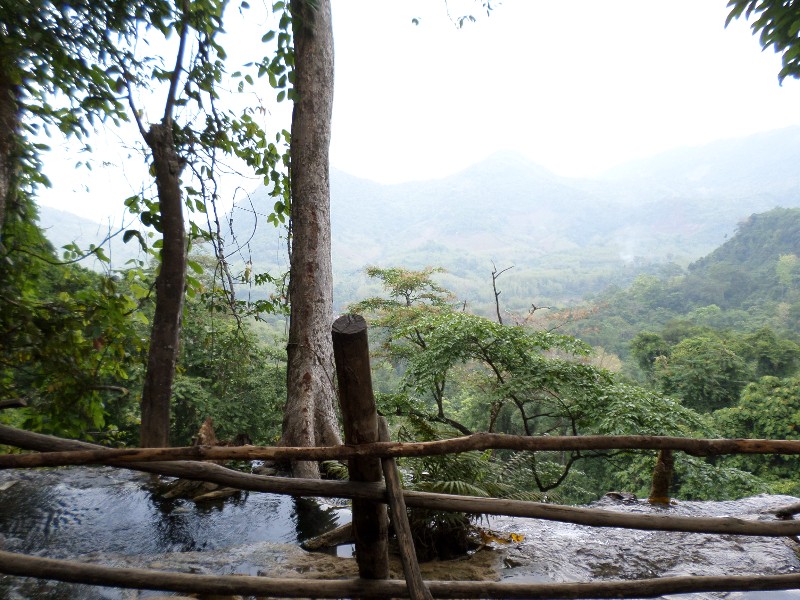 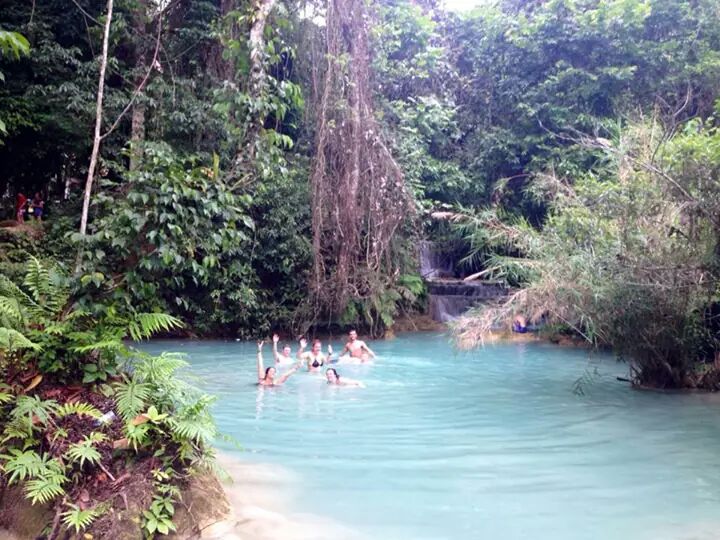 The evening ended the same, food, drinks and bowling (which I won… again)

Our last day in Luang Prabang we spent exploring the local temple cave and chilling in the town and hostel. We all chipped in for a slow boat over to the caves, the water was beautiful and the caves were nice and cool, although very small. 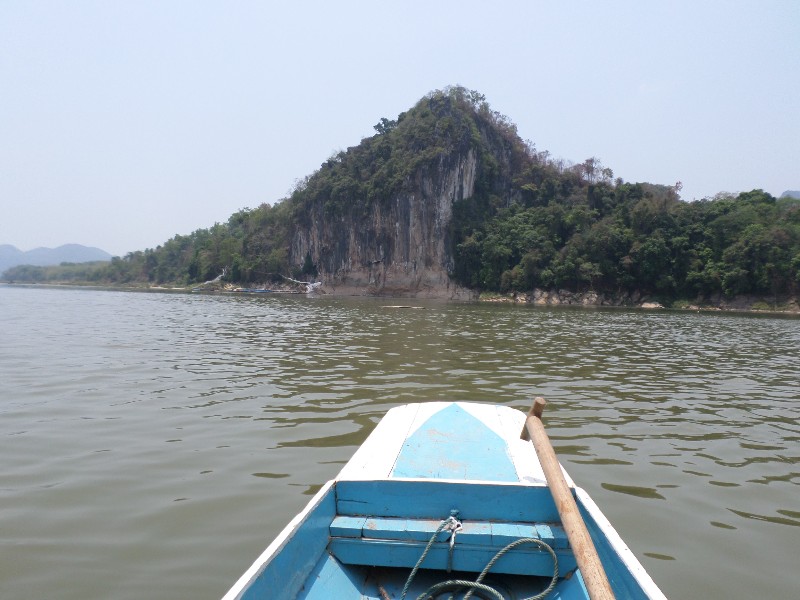 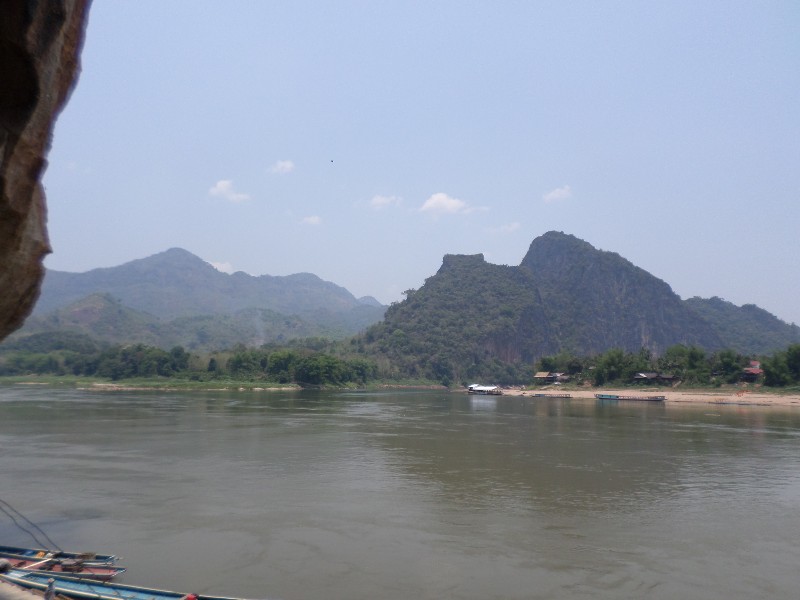 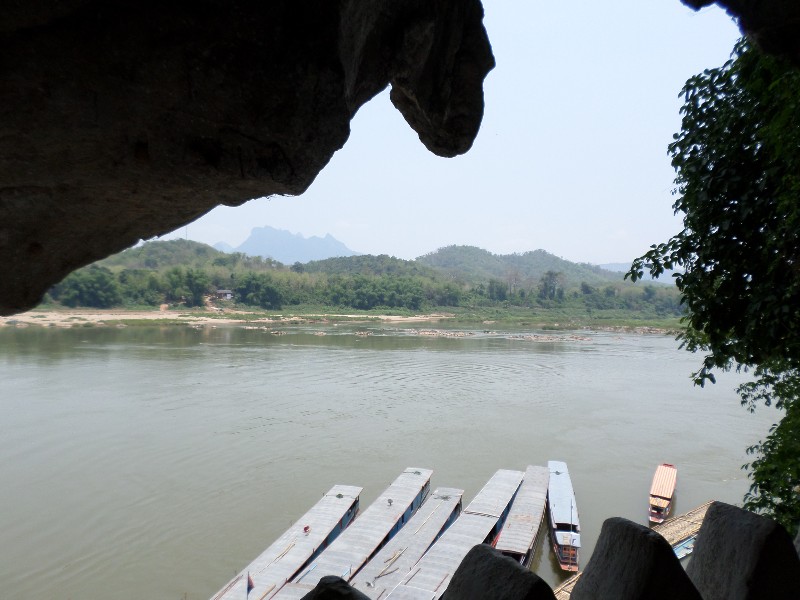 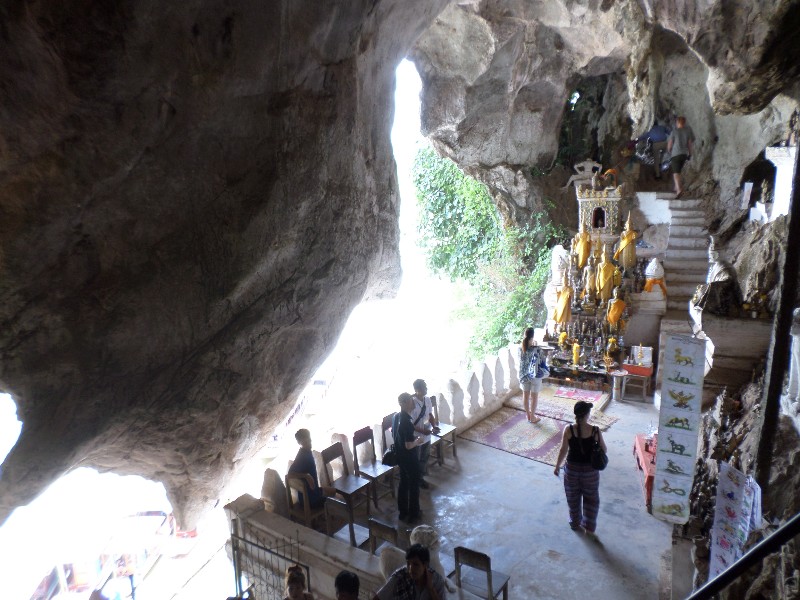 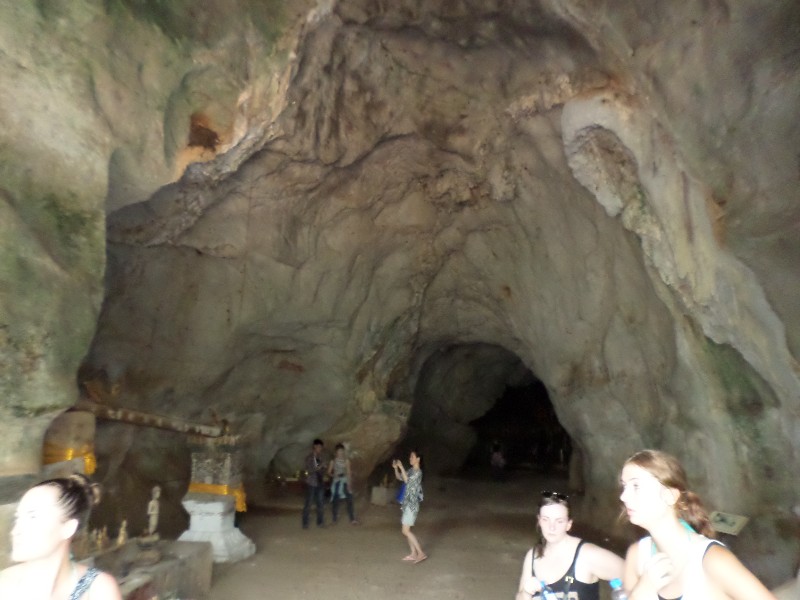 Luang Prabang was very touristy… although you can see why, as it was a beautiful place, especially the waterfalls and river. It was the first time really that I had immersed myself into a hostel fully. I loved the social aspect, and I certainly made a lot of friends here. I also started going out a bit more in the evenings. I was finally starting to relax and give in to the ‘travelling’ lifestyle!