After an amazing time in Chiang mai, I decided to begin my journey into Laos and China. On my last day in Chiang mai I visited the Chinese embassy with a visa application form I had completed at home. I found the embassy easily and got my ticket for a queue position. Are an hour of waiting to be seen I was told that because I was planning on entering China via bus, my form needed to be typed up not hand written! I had seen other people get hand written visas accepted, so I wasn’t sure why it was so different for bus entry. So I don’t now have a visa for China… I think I will continue my travel into Laos and look at applying again in the capital, Vientiane.

So, in a slightly foul mood I left Chiang Mai by bus for Chiang Dao, a nearby village I had read about online that was supposed to be great for treks and hill tribe visits. The bus journey was incredible, and for the first time I really felt in an exotic tropical country, in the middle of nowhere. I met a guy from Belfast, Sean, on the bus, however he was going straight to tha ton.

The bus dropped me off at a random bus stop in the centre of Chiang Dao; essentially a short row of shops. There were no taxis anywhere in town as it was still the Thai national holiday so I had no way of getting to my accommodation for the night. I spoke to a shop owner next to the bus stop who spoke proficient English and she asked her boyfriend to drop me off at my accommodation in his pick up truck. We arrived at Hobby Hut Homestay but nobody was home! After calling in on the neighbours, we managed to locate a little old Thai lady who didn’t speak a word of English. She cleaned up a hut for me and finally I was settled in Chiang Dao! 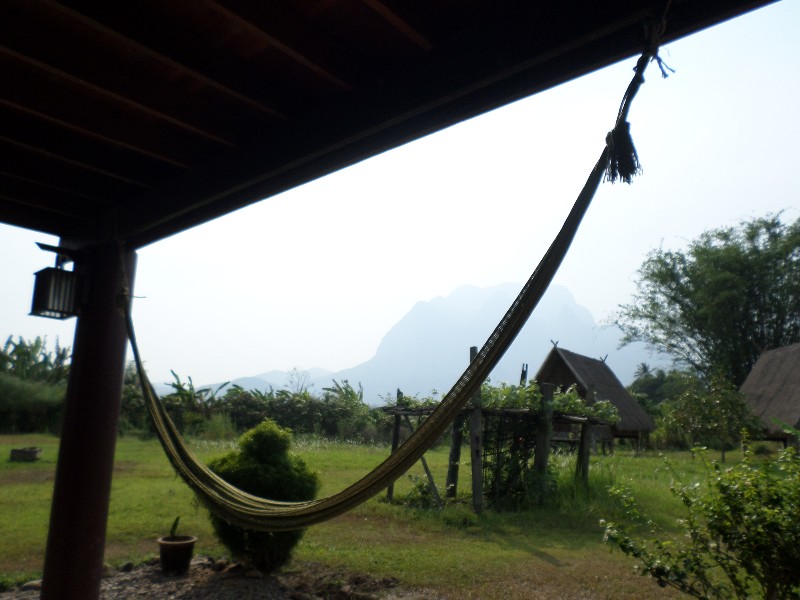 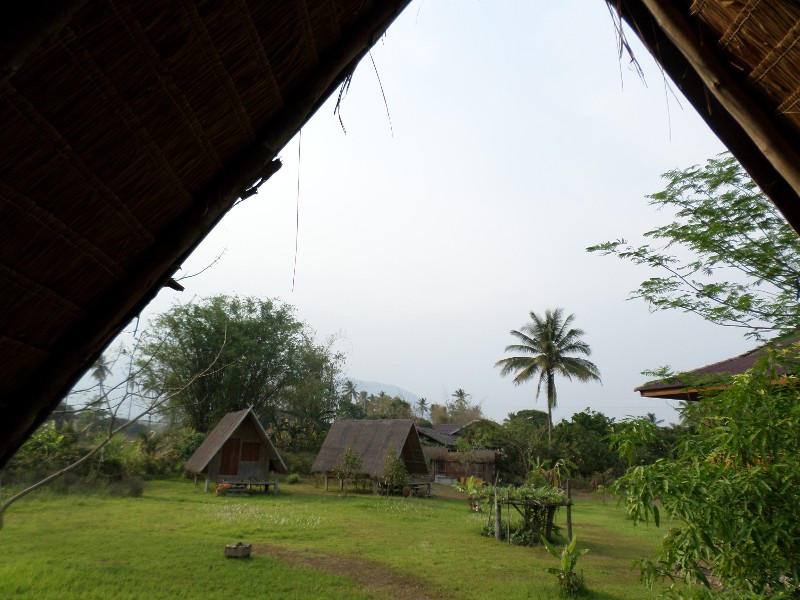 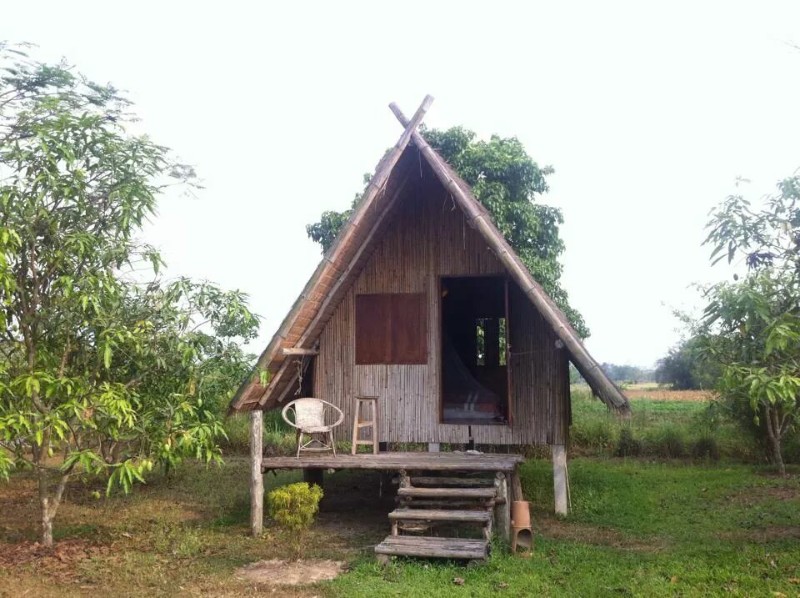 The town was beautiful, set in the foothills of Chiang Dao Doi (mountain). Although I was the only westerner in the whole town! A non touristy place and out of season… every where I went the locals were so excited to see me and you could hear them whispering “farang” (foreigner). I had a few people who wanted their photo with me, based on my height, skin and eye colour. However I was made to feel very welcome wherever I went.

I made sure after tea I was home before dark to get ready for bed, but my plan was foiled by a friendly, but terrifying, visitor: 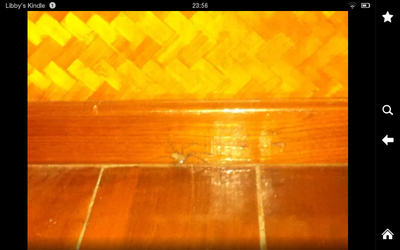 A huntsman spider… anyone who knows me knows I have an irrational fear of all spiders. Now, a fear of a huntsman spider is definitely rational, so I must admit, I was quite distressed. But since I was in the middle of nowhere, with nobody within 20 miles who spoke English, I had to face my fear. I found a broom in the toilet area and chased the spider away at arms` (and broom) length. However, by the time the spider was gone it was pitch black… So my trip to the outside toilet before bed was almost as stressful! I was in bed that night by 8 pm, all wrapped up in a cocoon inside my mosquito net, and I soon became very proud of myself for being able to cope with the insects, spiders and darkness. 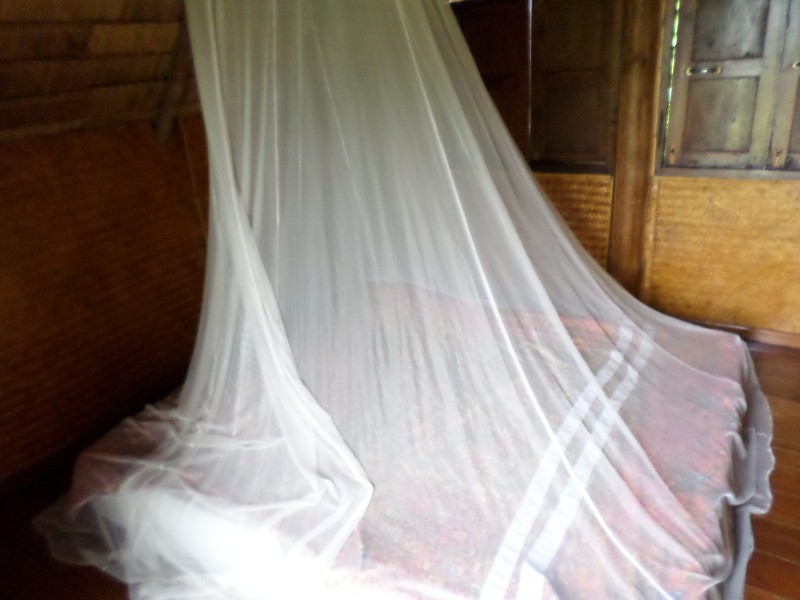 The next day in Chiang Dao I hired a bike and rode the 10 km to the mountain where there was an immense cave and temple system. The cave was incredible and for some part of it I needed a guide and a lantern. My guide had a great sense of humour! Especially when I had to crawl through a very low tunnel, she found it hilarious that I was so tall, but she helped me all she could and after crawling through the right space we made it into a huge cavern. 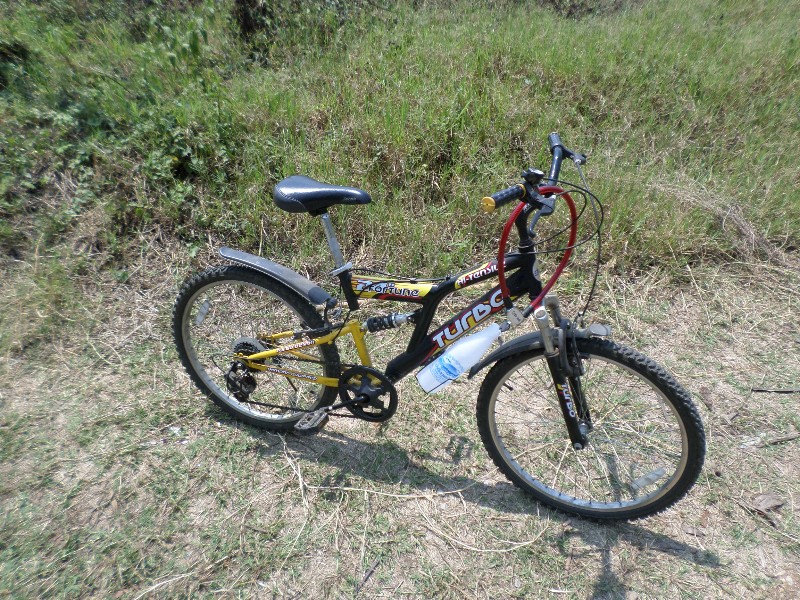 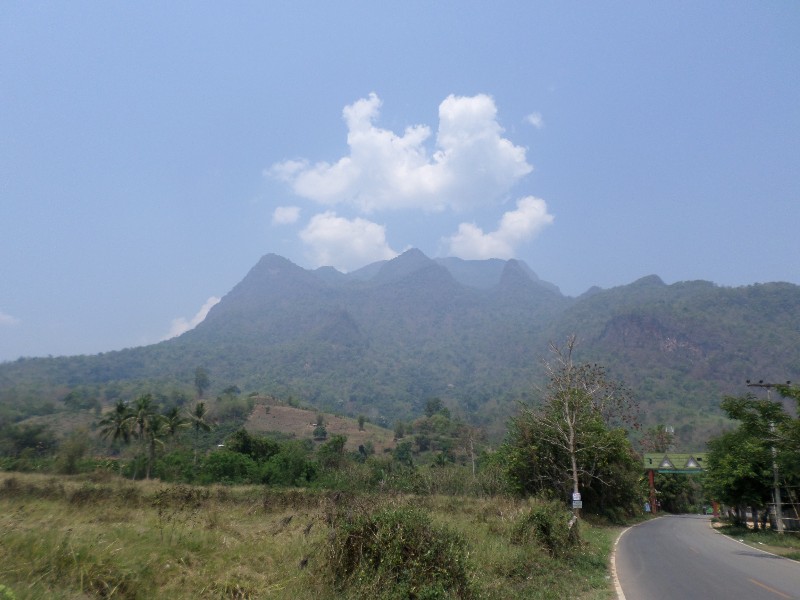 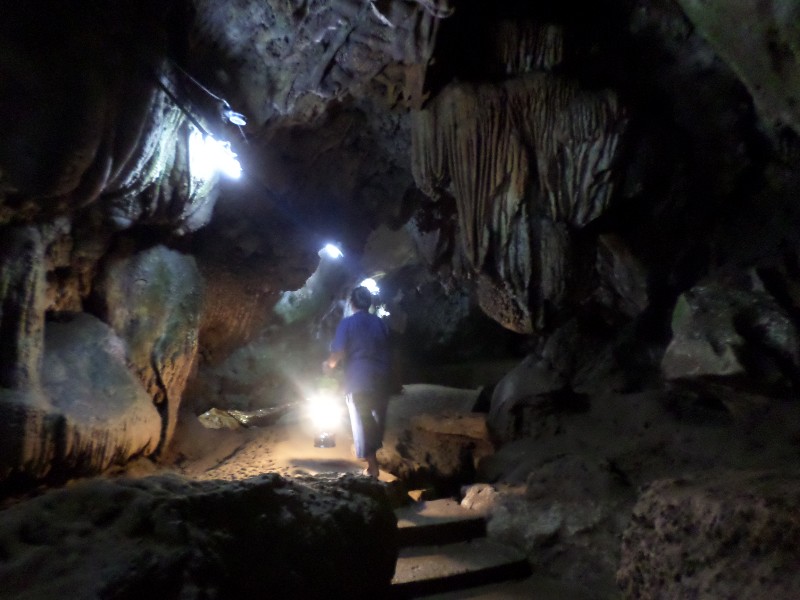 Outside the cave was a natural spring full of giant fish, some of the biggest koi and catfish I’ve ever seen! 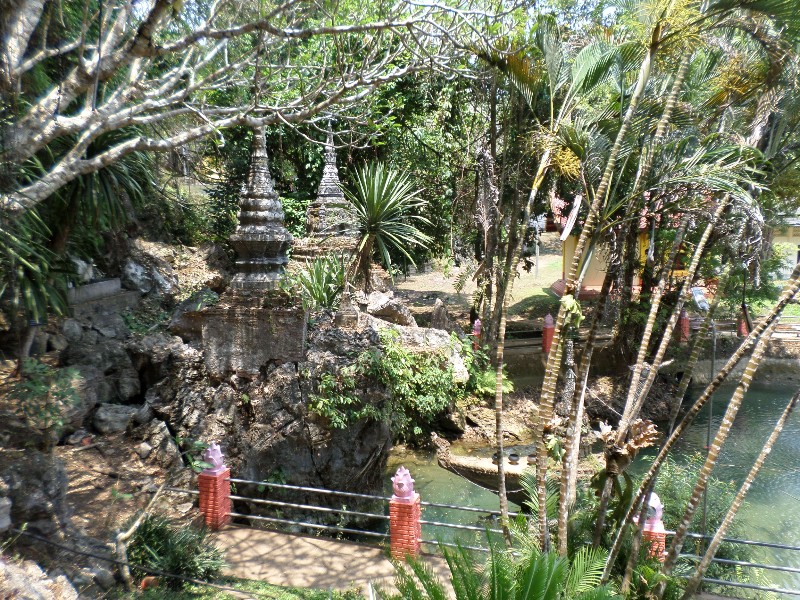 I then biked through the town, just exploring, watching fish in the river and people playing in inflated tyre inners. 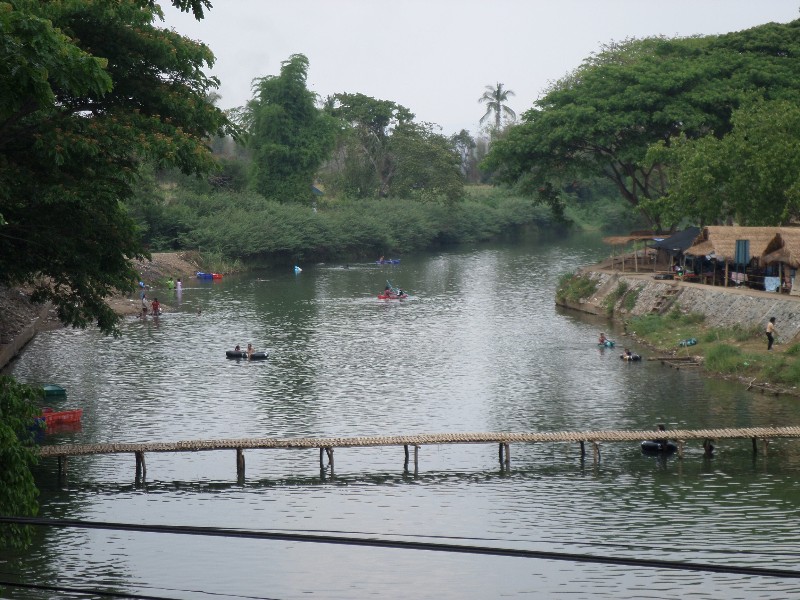 After some amazing food I went back to my accommodation to find the owner’s daughter who spoke really good English. I arranged for her friend to drive me around Chiang Dao the following day to see some of the attractions, so I had an early night, without any spider dramas!

I met my chauffeur at 8 am and we went straight to Nam Dang national park and Sri Sangwan waterfall, then to a temple right on top of the mountain, as well as a few other stunning temples along the way. It was a lovely day! 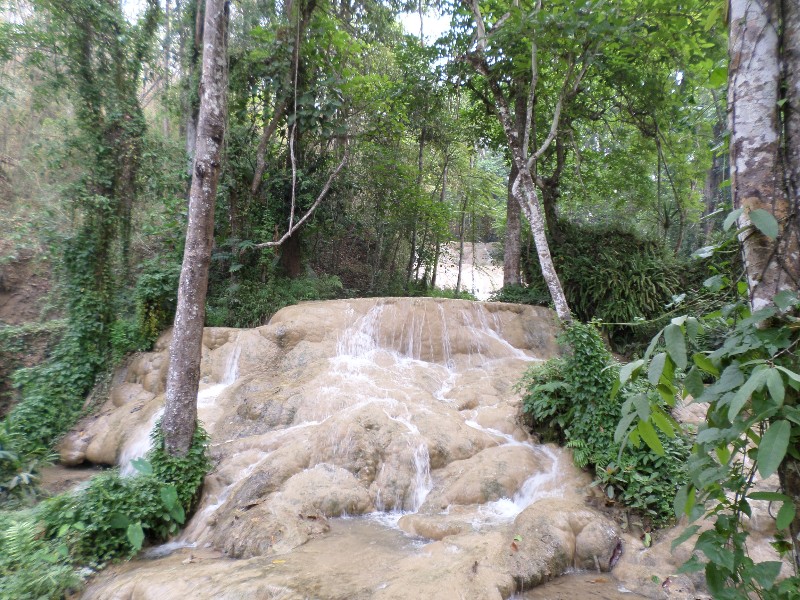 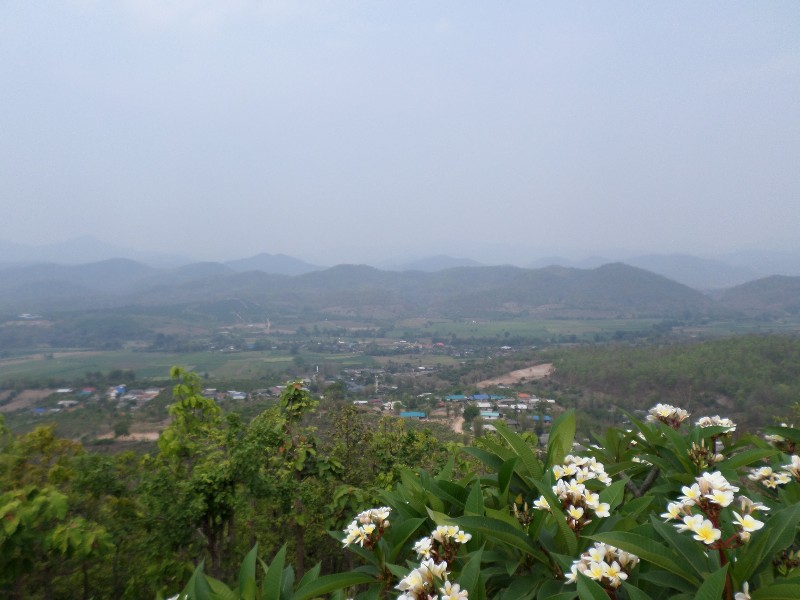 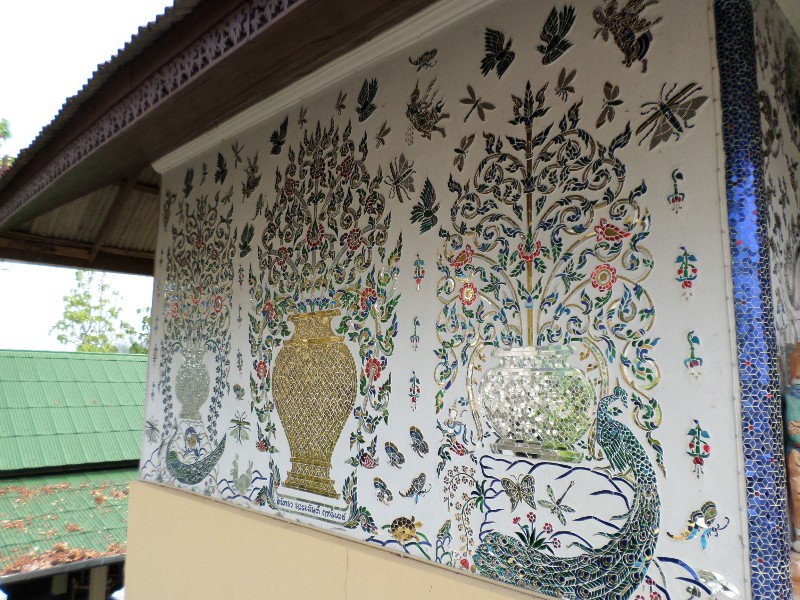 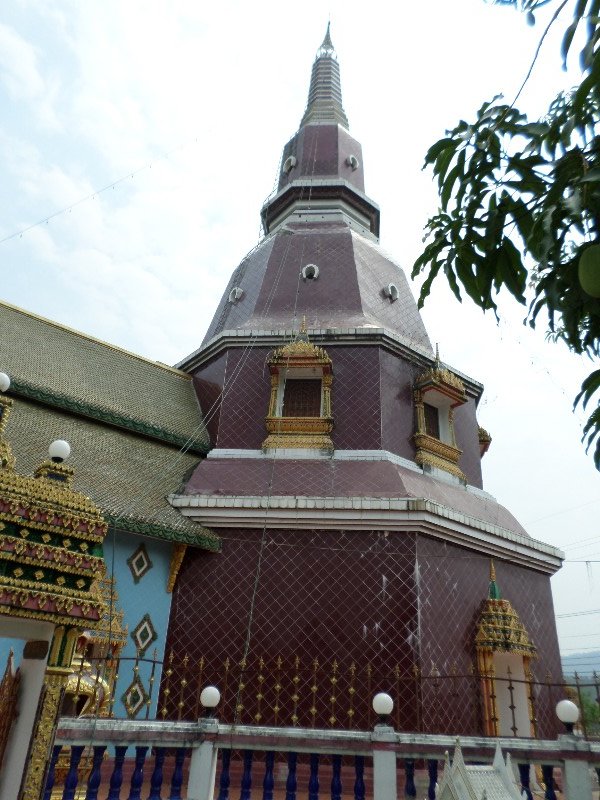 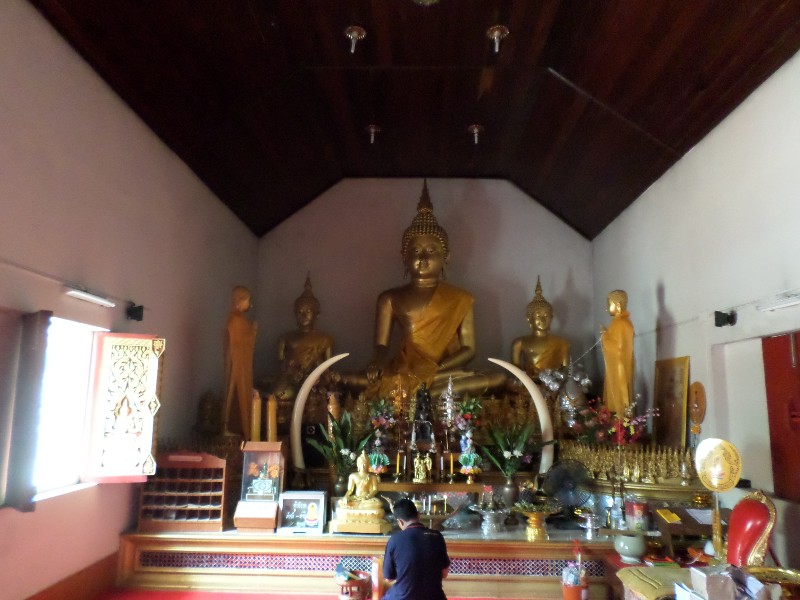 I absolutely loved Chiang Dao, however, the isolation was quite hard, and the town was very sleepy. So since I had kept in touch with Sean in Tha Ton, I caught the local bus there that afternoon.

In some ways I am glad of my isolated experience of this party of Thailand, but unfortunately, because nobody else was there, I was unable to do any treks to hill tribe villages, which was one of my main reasons for visiting!