After waking at 6am, we got a taxi across town to Bangkok Thonburi train station. There was a huge food market here as well as a few food vendors and after a noodle soup breakfast we boarded a train to Kanchanaburi. 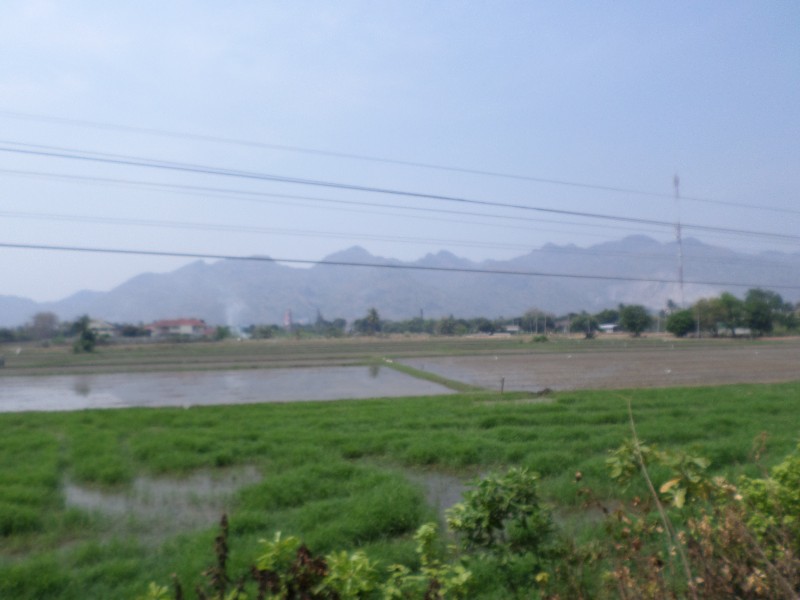 Once there a minivan and bus took us to Erawan national park, where we planned to go swimming in the waterfalls. We only took small over night bags, so we could go straight there. 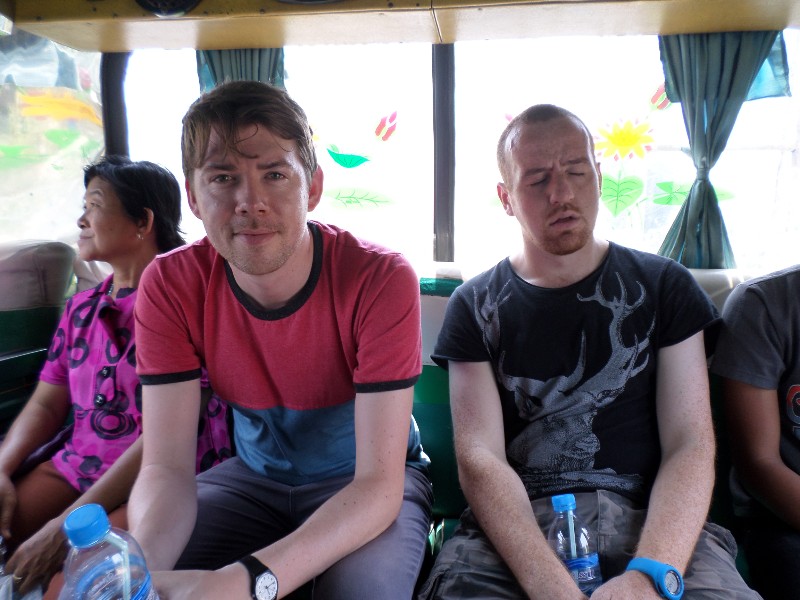 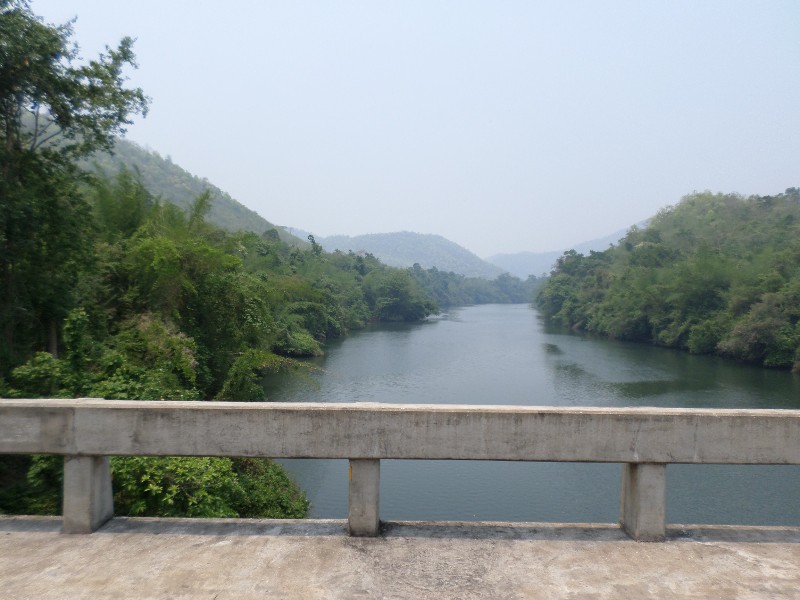 The falls here are in several tiers, the first few tiers tended to be great for children and we saw a small group of young monks playing in the pools. 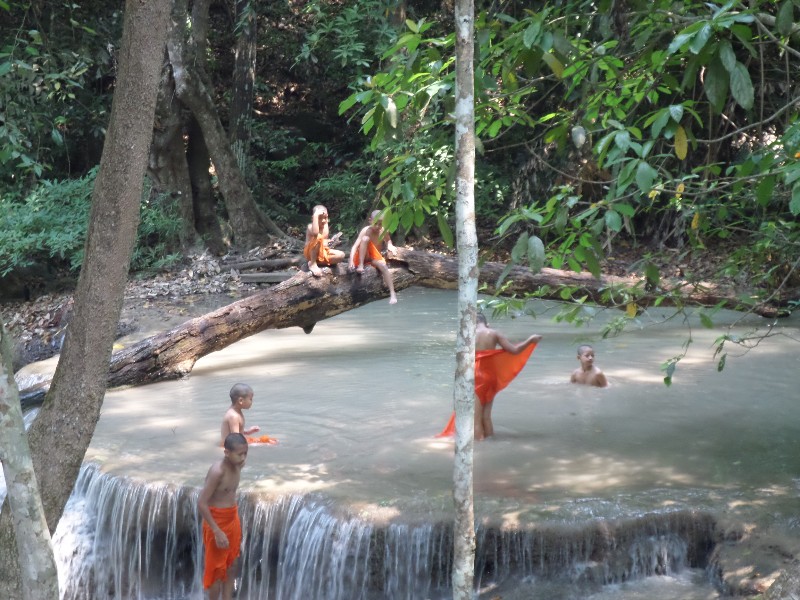 The first pool we swam in was tier 4, and had lots of very large nibbley fish in it! As well as large moss covered rocks you could climb up and slide down. We spent a few hours playing here, but the photos are poor as I didn’t want to get my camera wet! 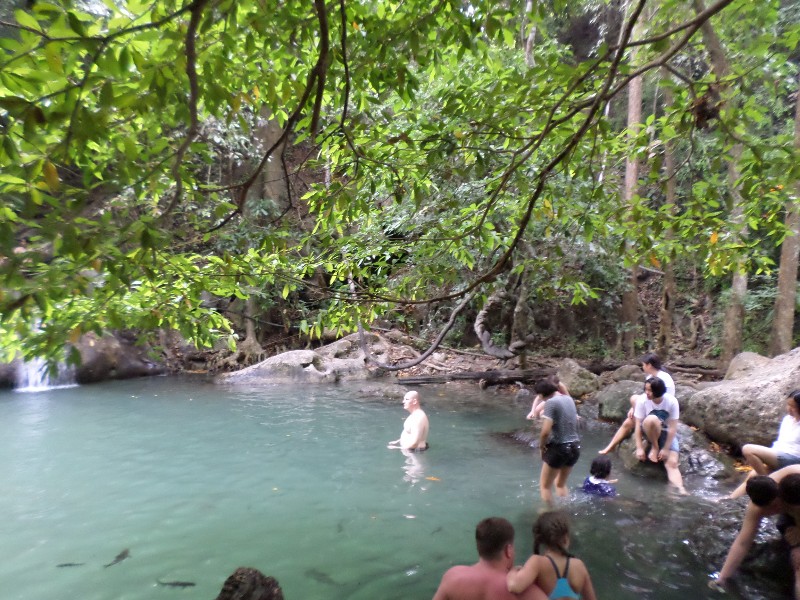 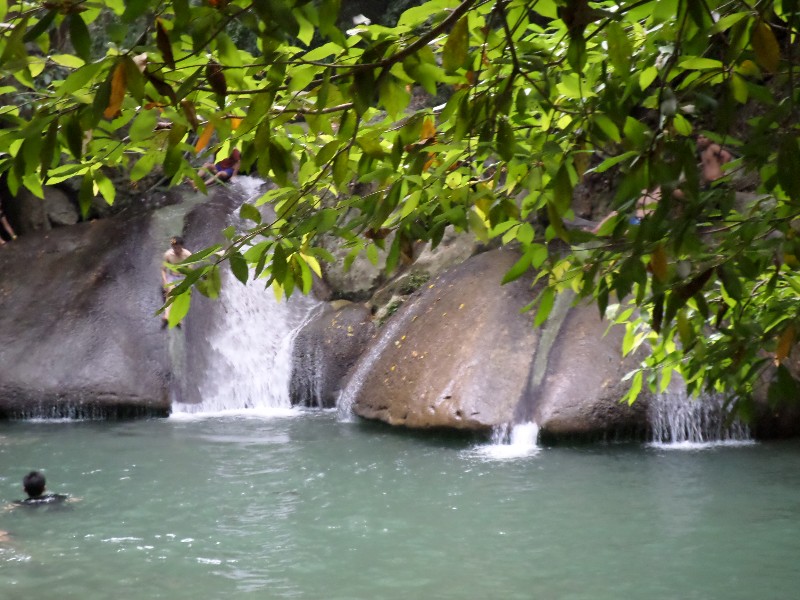 The second tier we went to was tier 6, which was completely deserted… this was so beautiful. Swimming through jungle, with shafts of light coming through the trees, butterflies flying in lines over the surface and Dan doing an impression of Peter Andre in the waterfall – so peaceful and serene!! Lol
We stayed here until the park closed and we were ushered out – long after the last bus left… 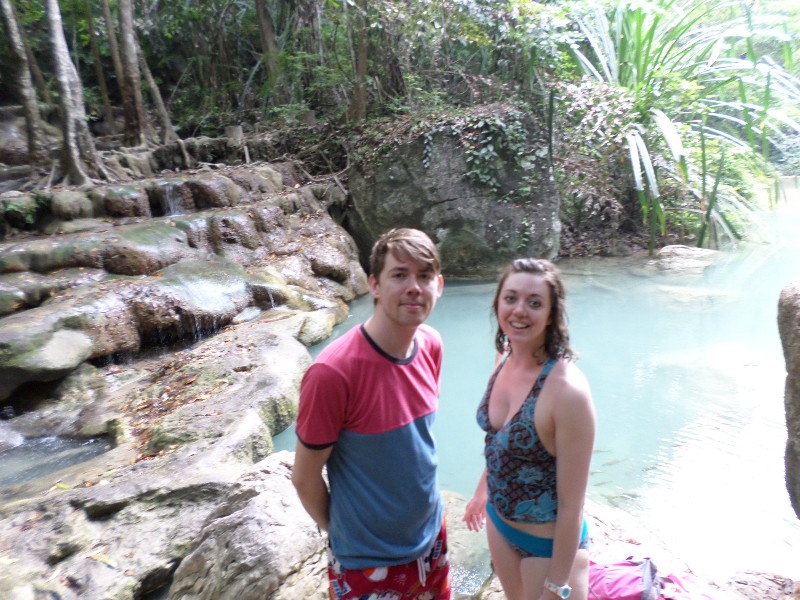 Back at the entrance we asked about any by places to stay inside the national park, but they were all full! Luckily some body saw we were looking and recommended a lady just down the road, she said “if you don’t mind what it looks like…” We had no idea what was in store for us!! 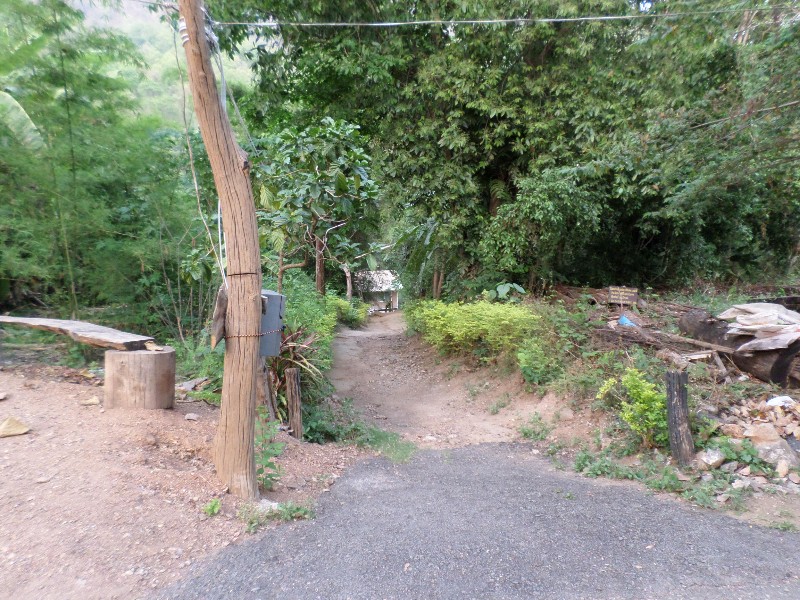 The walk down to who knows where… 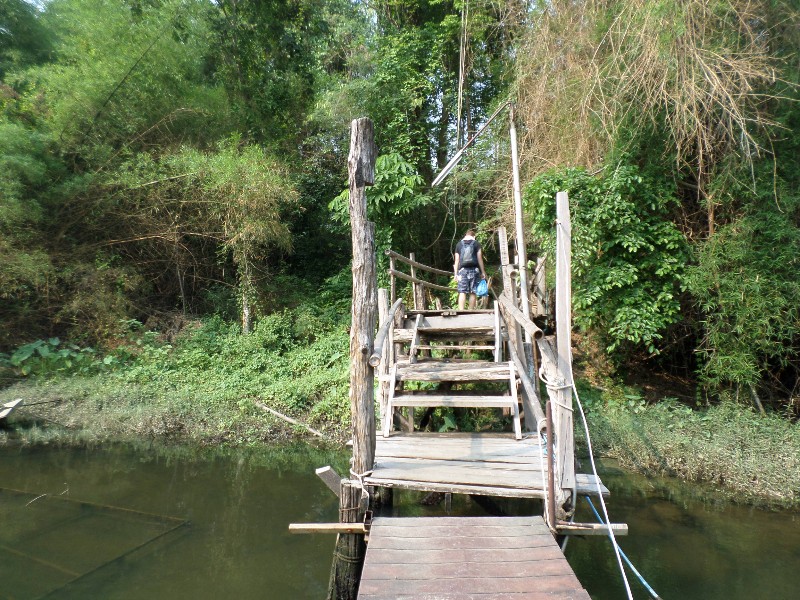 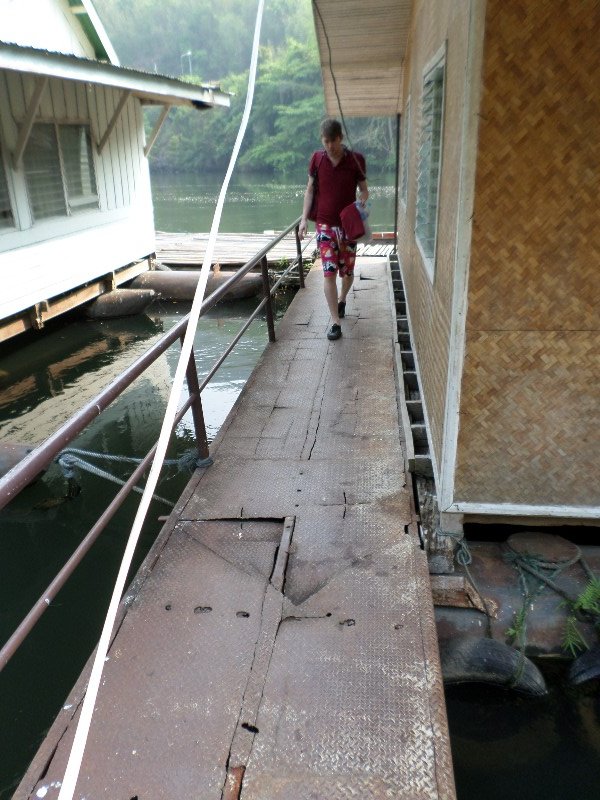 The most terrifying walk across a rusty metal gangway! 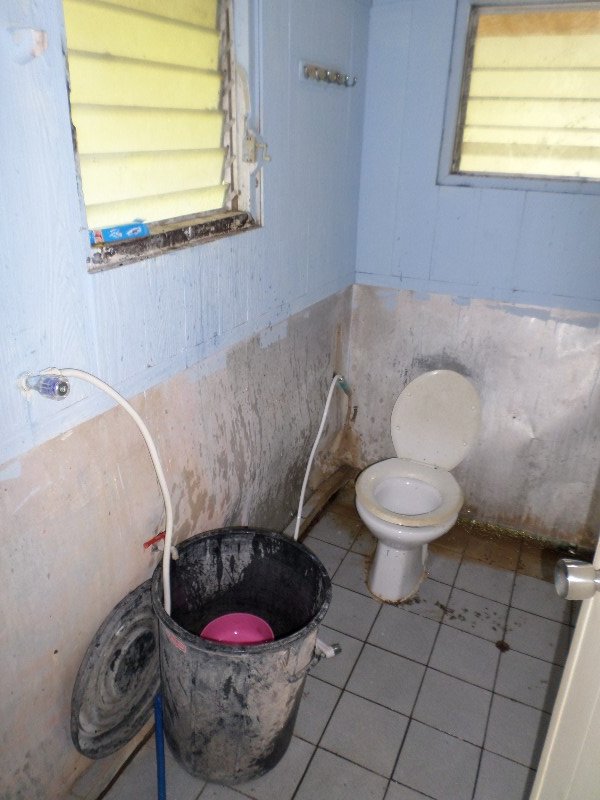 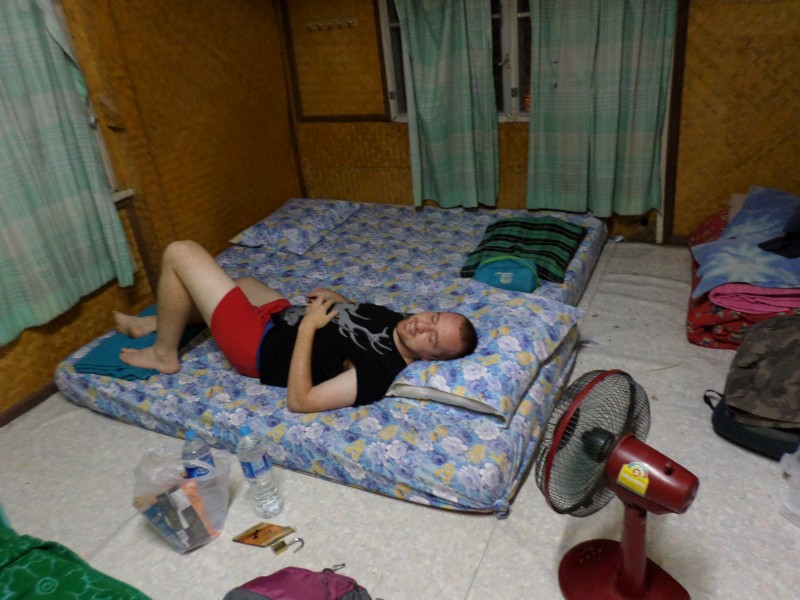 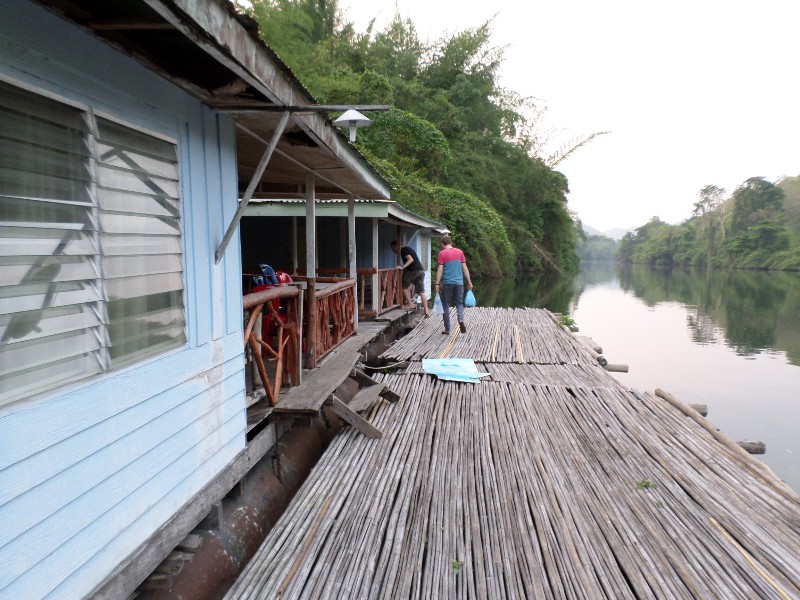 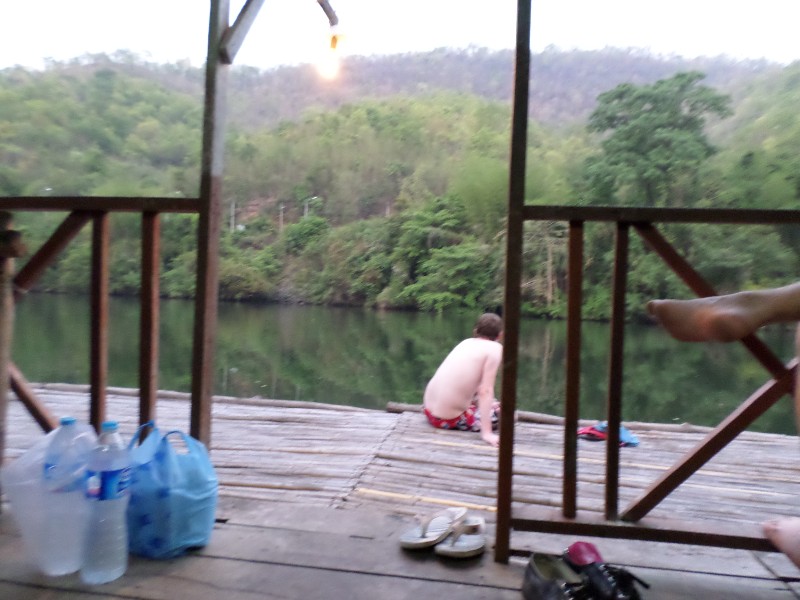 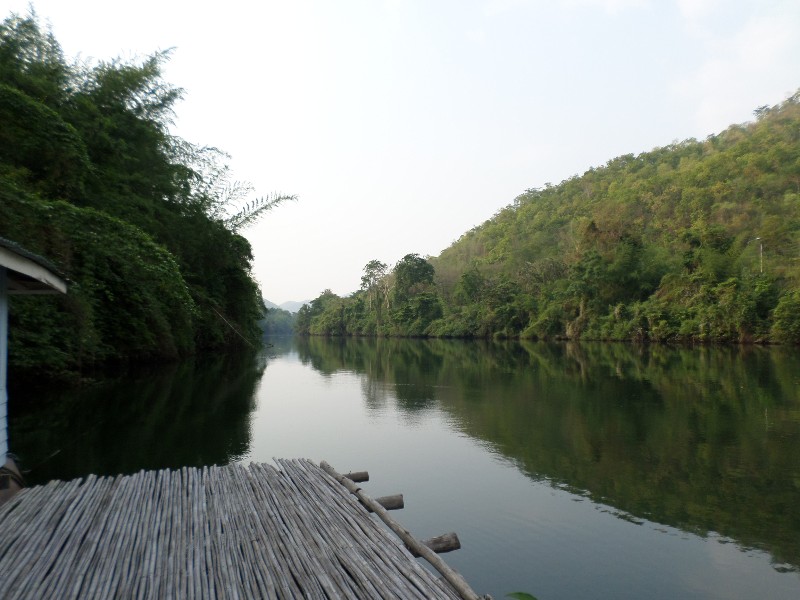 The views…. we were the only people in sight.

However, that didn’t mean we were alone, as the raft house was home to a dozen spiders, 10 or so geckos, a few (but not too many) mossies, and about a million Mayflies, who fortunately all died at about 8pm.

We huddled around a mossy candle, until we decided it attracted more insects than it repelled, before going to bed fairly early for an early start the following day.

The next day we ate back up at the park entrance and headed back to the fun pool with the slides. We then relaxed in tier 5, a pool with relatively smaller fish, which I found small enough to allow to nibble my feet. Ben and I relaxed to the nibbling, whilst Dan screamed like a girl and wouldn’t keep still!! Hee hee! 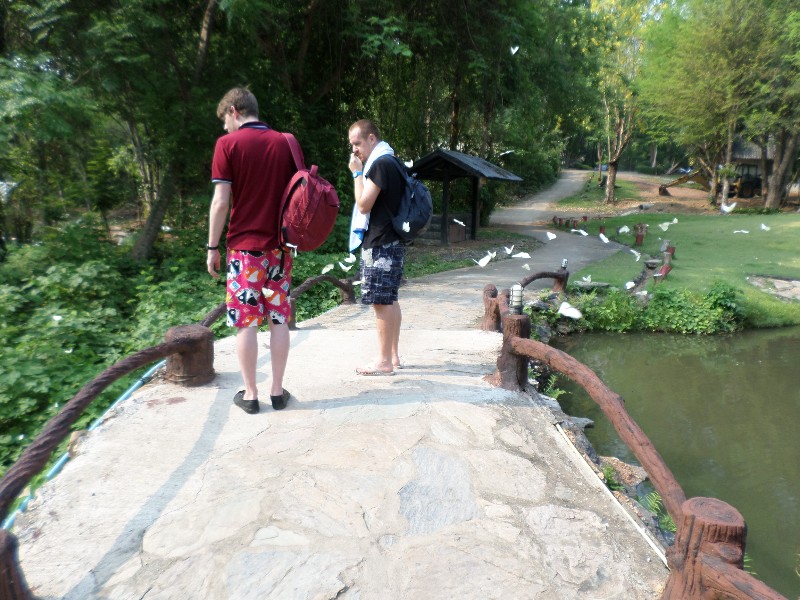 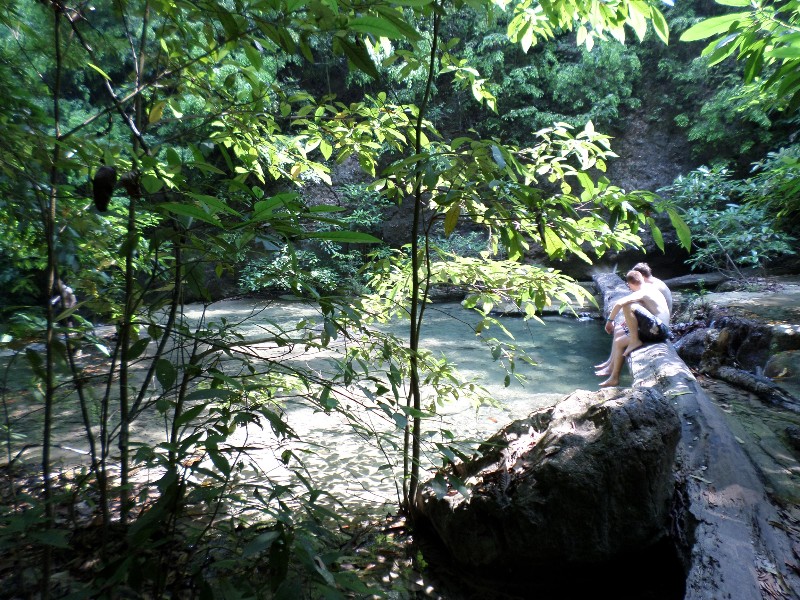 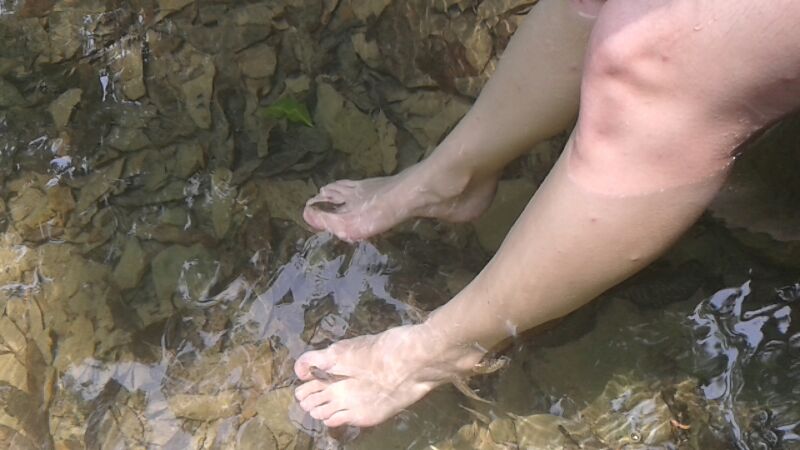 At one point I must’ve had about 20 fish nibbling me, but when Ben went to take a photo they all swam off! We think it was the shadow. 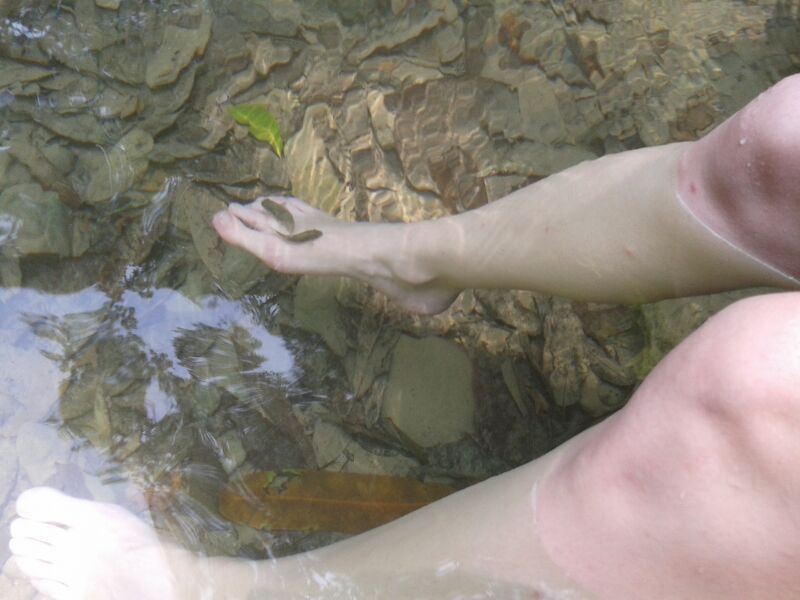 We reluctantly left to make the bus back into town and the journey back to Bangkok, barely making the bus we had to run to it in 35° heat!!

All of us said, we could’ve spent a week in the park, playing in the pools, watching nature – there are supposed to be tigers in there! This is definitely somewhere I will visit again, and despite the bugs, I would even be inclined to stay at the same accommodation! What a magical place, really.

1 thought on “Kanchanaburi and Erawan Falls”