So after a dreadful nights’ sleep due to jet lag I decided to move to my next hostel – Hi Mid Bangkok – via taxi. I hailed one from outside link corner and it took me right there, only it dropped me off on the wrong side of a very busy road! Instead of running for my life across 6 lanes of traffic with speeding motorbikes, tuk-tuks and cars, I walked to the nearest pedestrian overpass. By the time I arrived at hi mid I was drenched with sweat!! So much for trying to avoid a walk. 2 showers later and Bel and Ben joined me for breakfast. The iced coffee here has been amazing so far; they put condensed milk in and it’s so sweet and cold!

Since Ben was visiting Bel’s mum that afternoon, I had my first taste of solo travel… I did ok I think! I took a train down town to Chao Phraya river, then a boat back up to visit Wat Pho. The temple complex was amazing. I think I read somewhere it is 8 hectares, and it had many mini shrines and Buddhas, all gold leaf plated. The main attraction here was the HUGE reclining gold Buddha – almost 50ft long I think – with mother of pearl feet. It was spectacular. But I also enjoyed watching some kind of initiation ceremony for young Buddhist boys. They were getting their heads and eyebrows shaved, then applying yellow powder; which looked like turmeric as it stained their heads yellow, before washing themselves with water. Some had nicks and cuts from the shave, I guess that’s what the turmeric was for, but they were all smiling and laughing. There was an old man with a hose pipe who seemed to delight in splashing them and the young boys were also playing with the water, splashing each other! 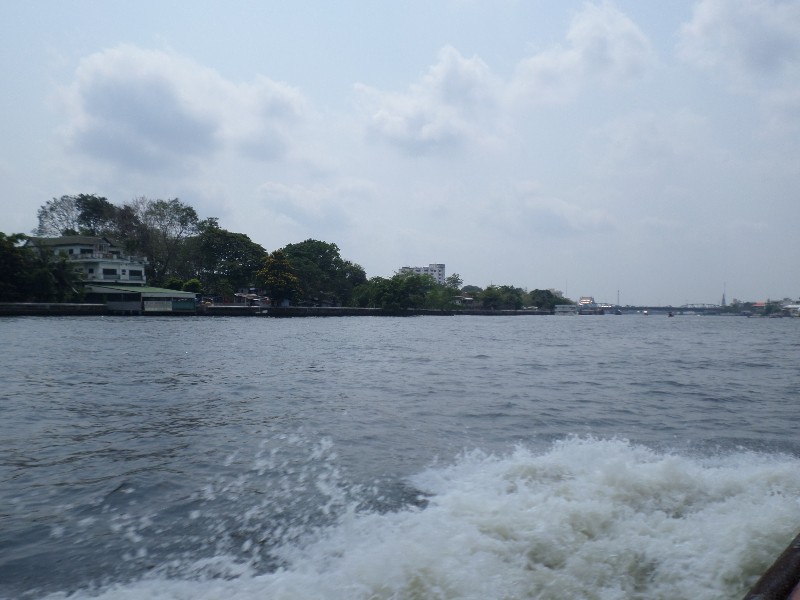 On the boat to wat pho. 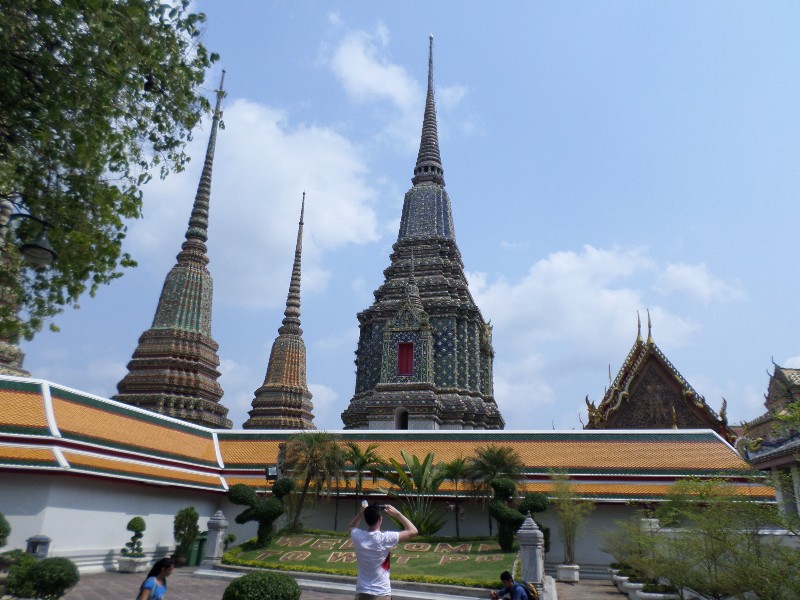 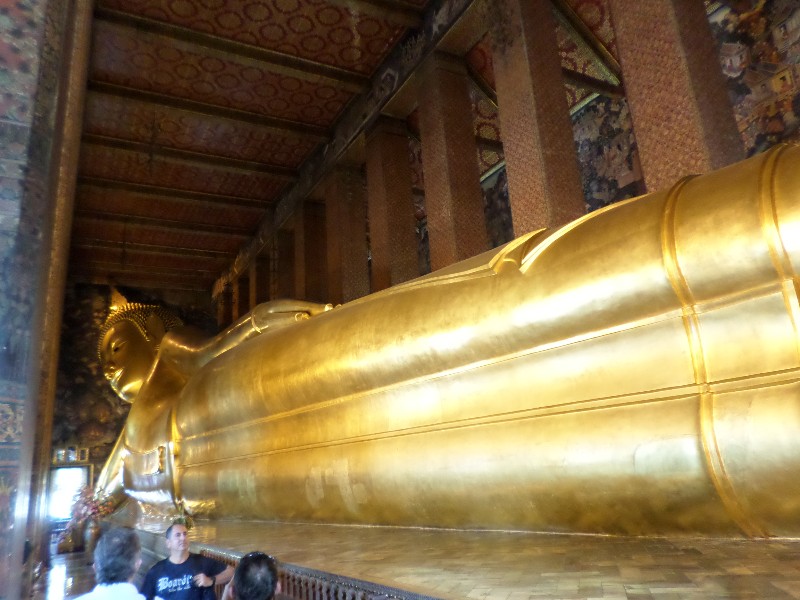 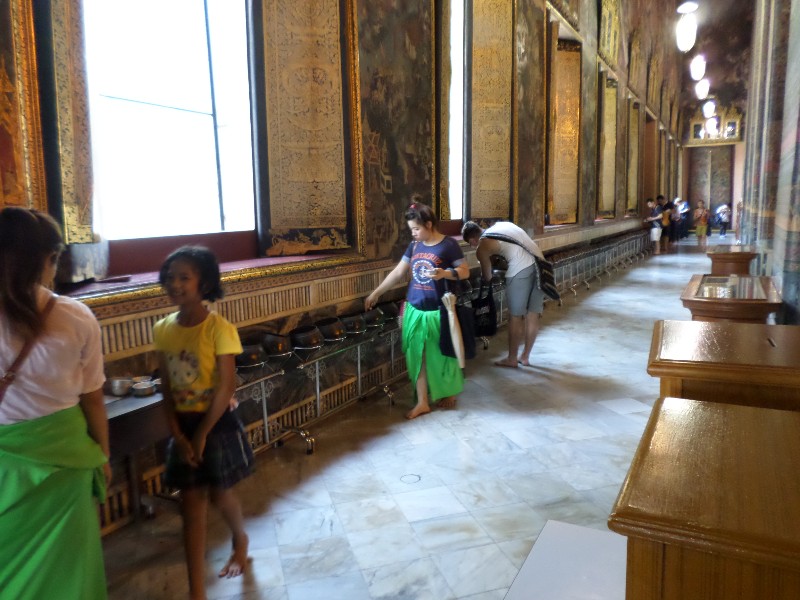 I think these were donation pots, people would take a bag of small copper coins and place one in each pot as they walked. 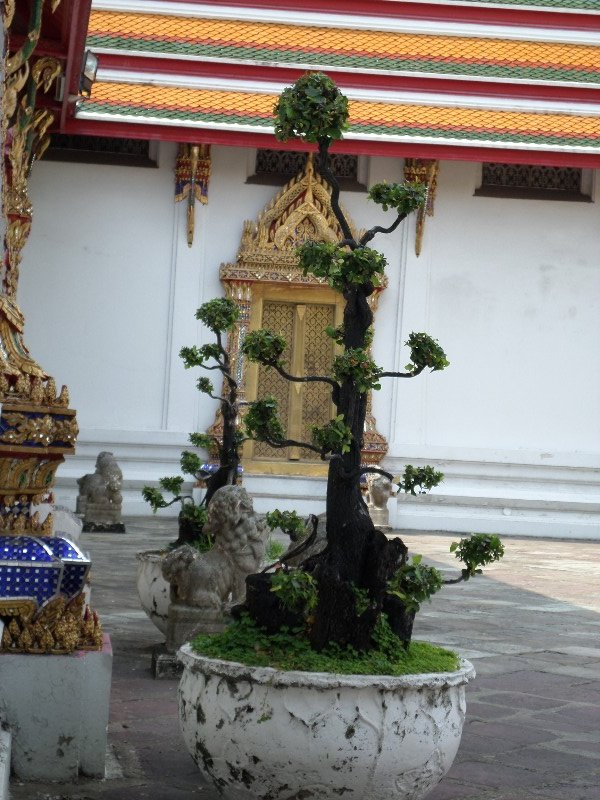 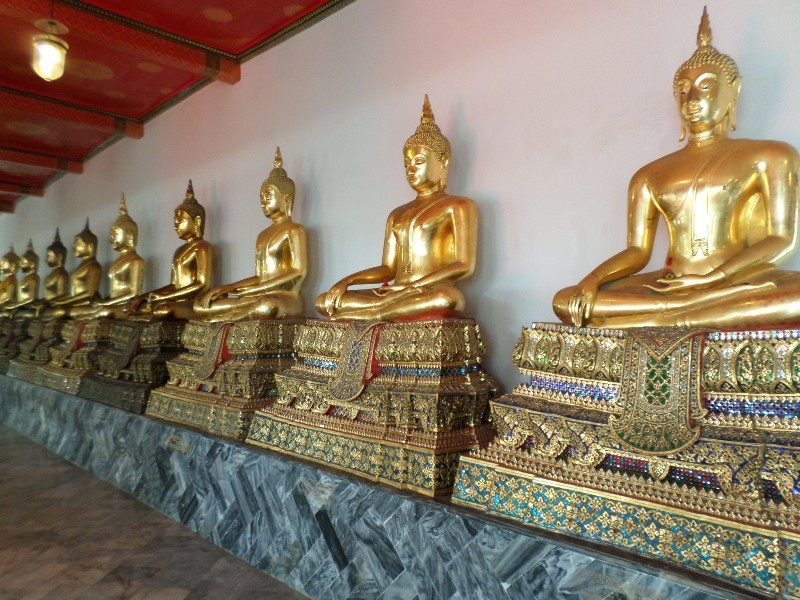 Almost everything was gold-leaf plated! 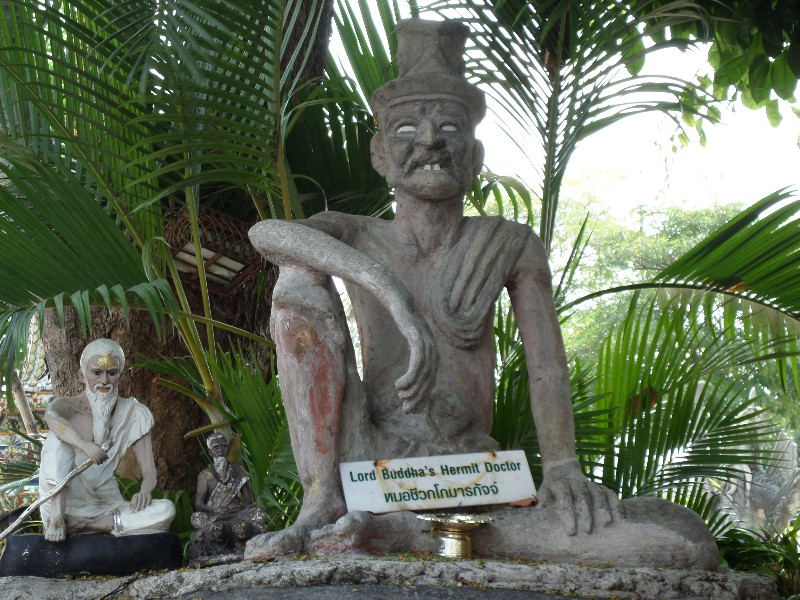 This but wasn’t… bit toothy though! 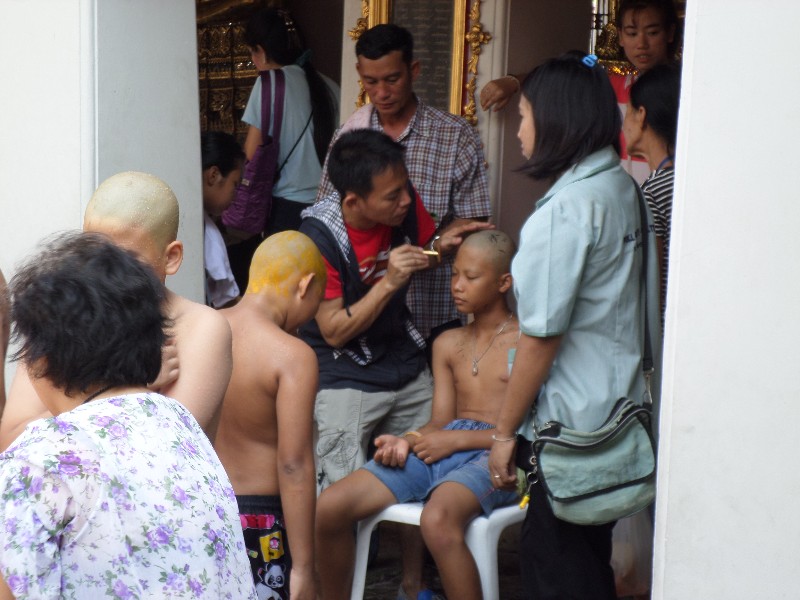 Young boys even got their eyebrows shaved off! 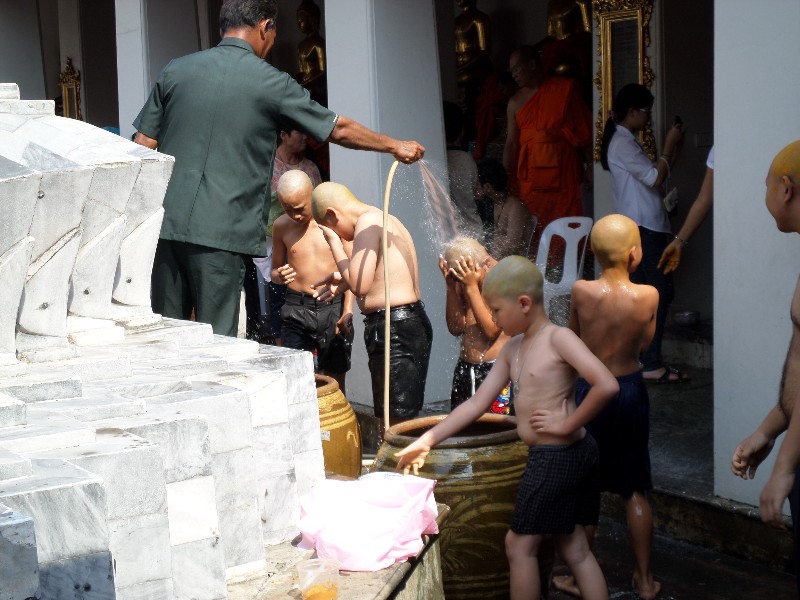 But they got to get sprayed with water afterwards, and it was very hot!

I then got another boat across the river to the opposite side to see Wat Arun. Completely contrasting to Wat pho, everything was stone decorated with ancient Chinese ceramics. The Khmer style tower was about 80ft I think and you could climb it – up some very steep steps! The front steps were busy, but round the back was nobody and the steps there were in the shadow of the tower so much cooler! 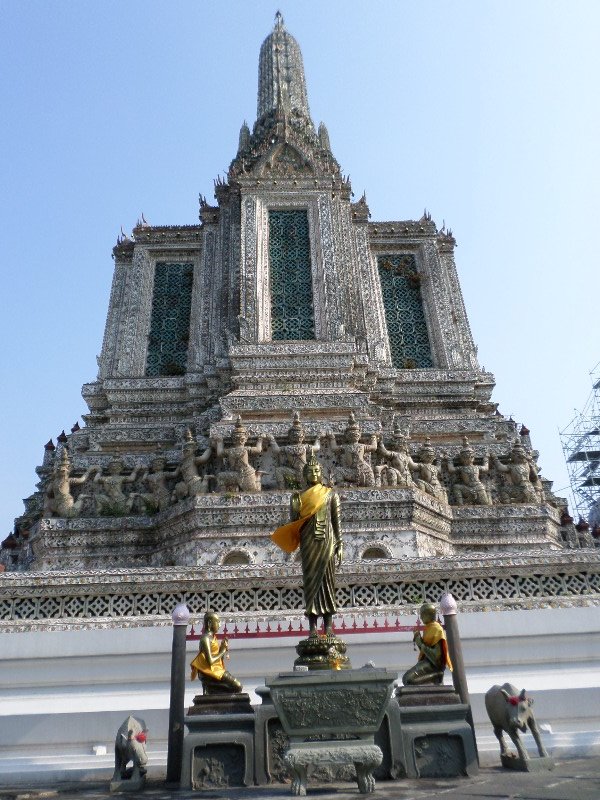 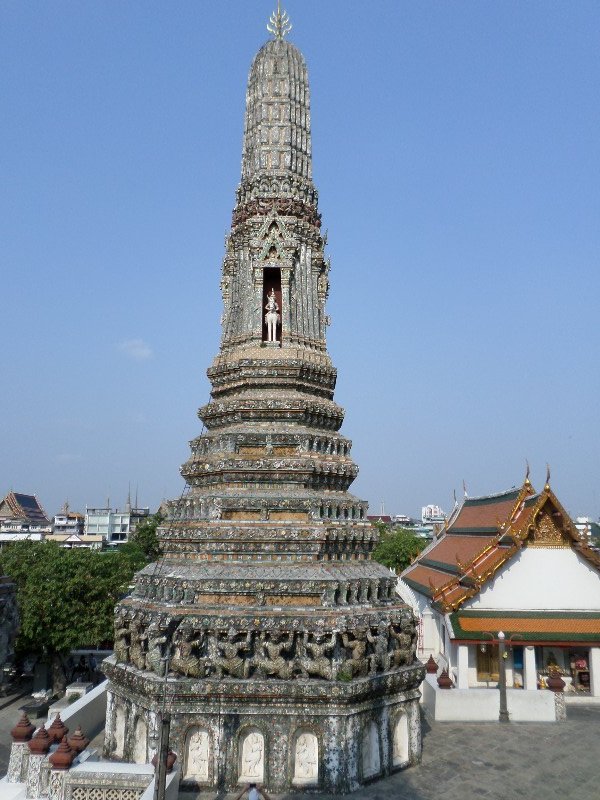 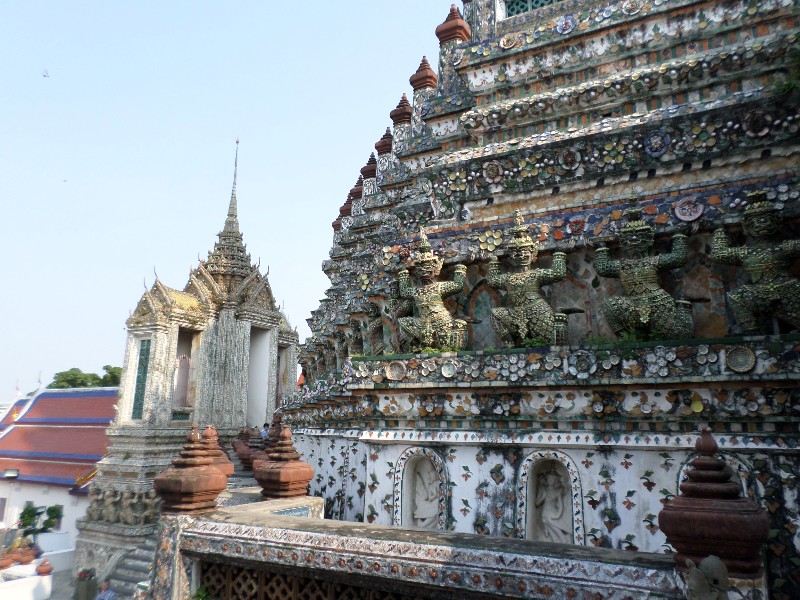 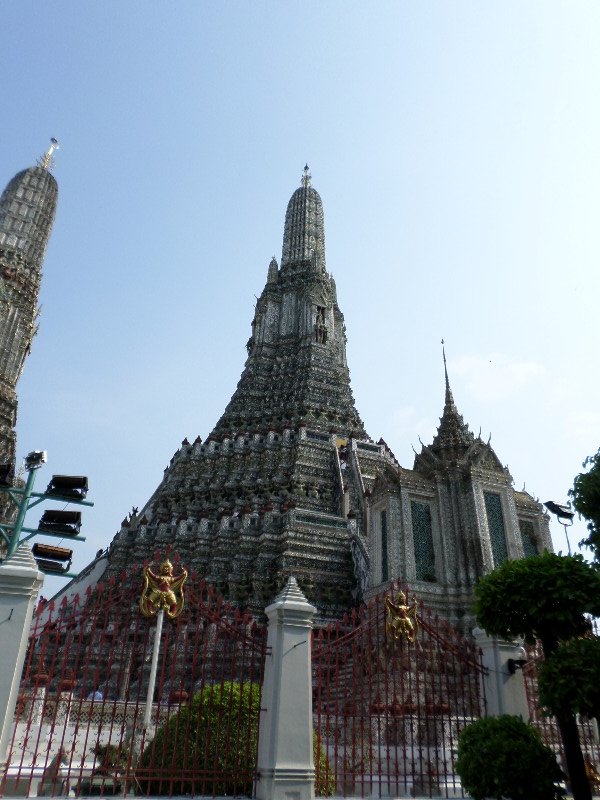 Climbers on the sunny side 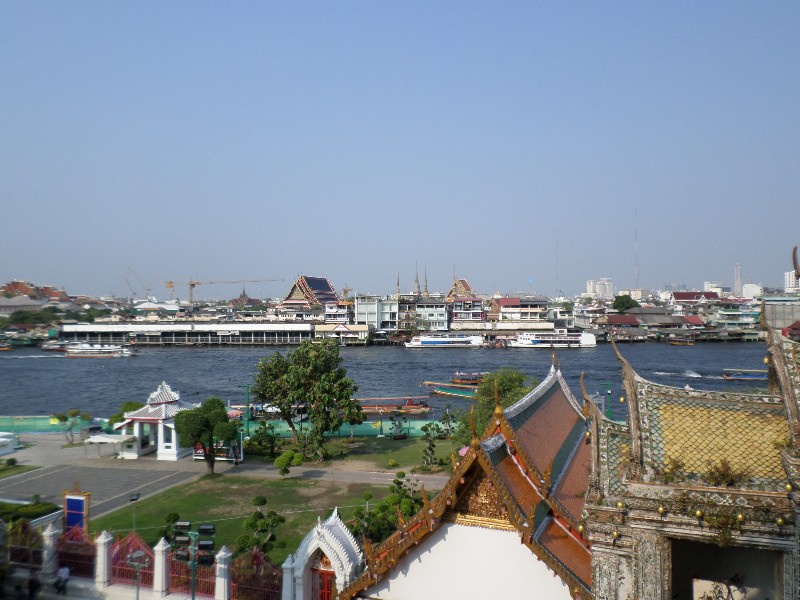 You could just see wat pho over the river from the top.

I got a taxi back to the hostel from here after a stroll through a park nearby.

Not sure what I will do tomorrow, but I know Ben wants to go to the weekend market, and I would like to see the golden mount which I didn’t see today (spent to much time watching people in wat pho!)

I will post some pics of the hostel tomorrow as it is beautiful!